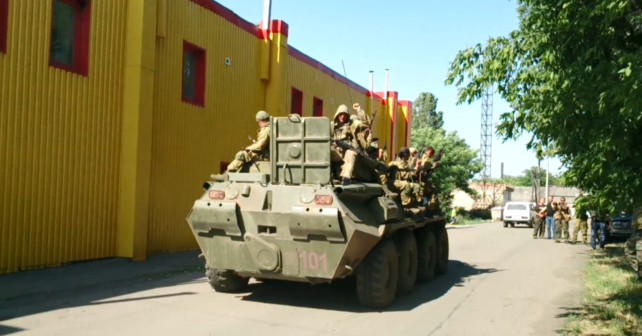 There is new conclusive evidence of the invasion of Russian troops into Ukraine’s territory: The Armored Equipment of an Engineering Unit of the Southern Military District of the Armed Forces of the Russian Federation in Snizhne in summer 2014.

InformNapalm international volunteer community got hold of unique videos that, when analyzed, provided evidence that BTR-80 armored vehicles with red tactical markings spotted in Snizhne in summer 2014 had been in regular deployment with the 11th Engineering Brigade (military unit 45767, Kamensk-Shakhtinskiy, Rostov Oblast, Southern Military District of Russian Federation) in late 2013 and early 2014. 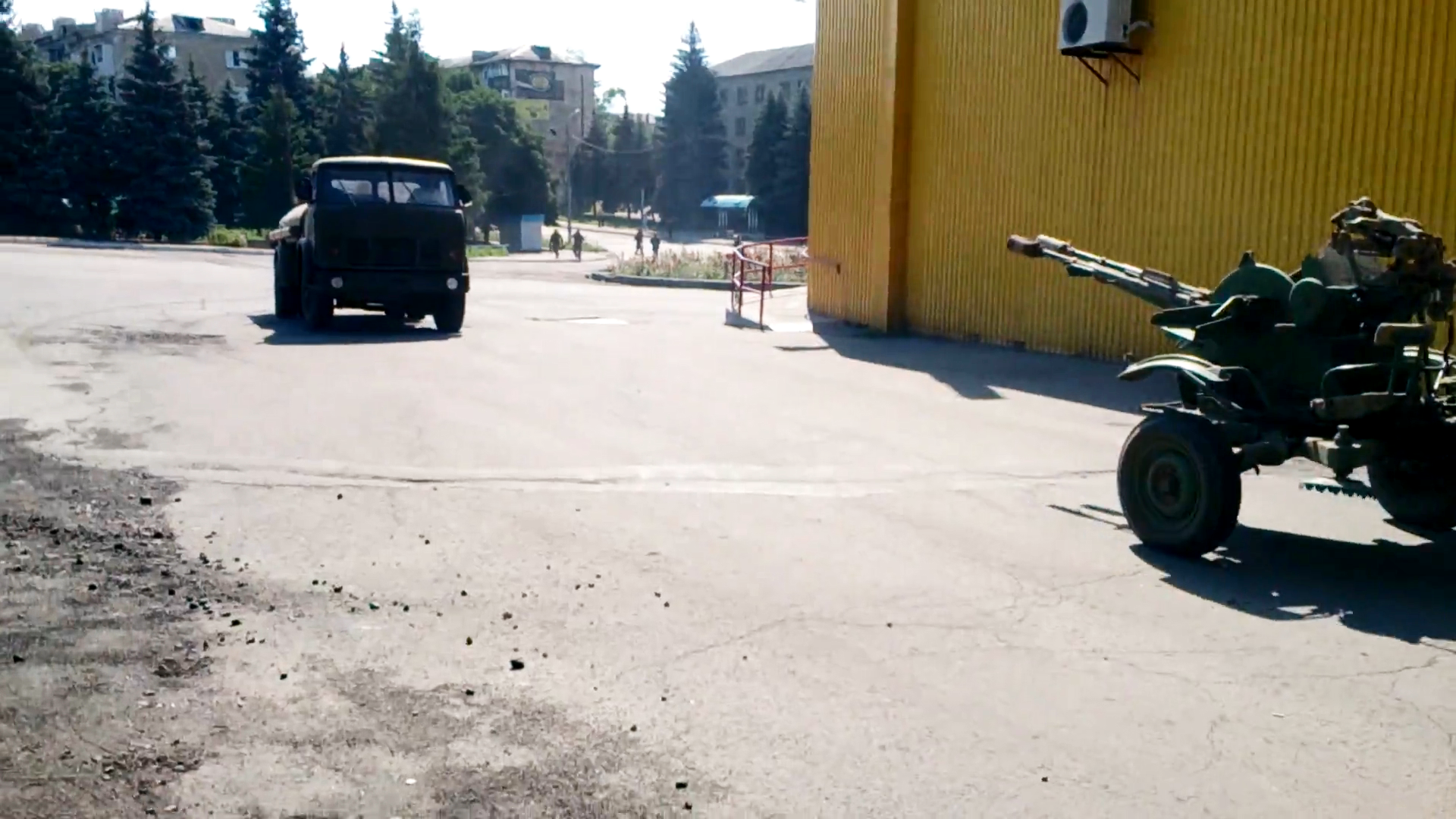 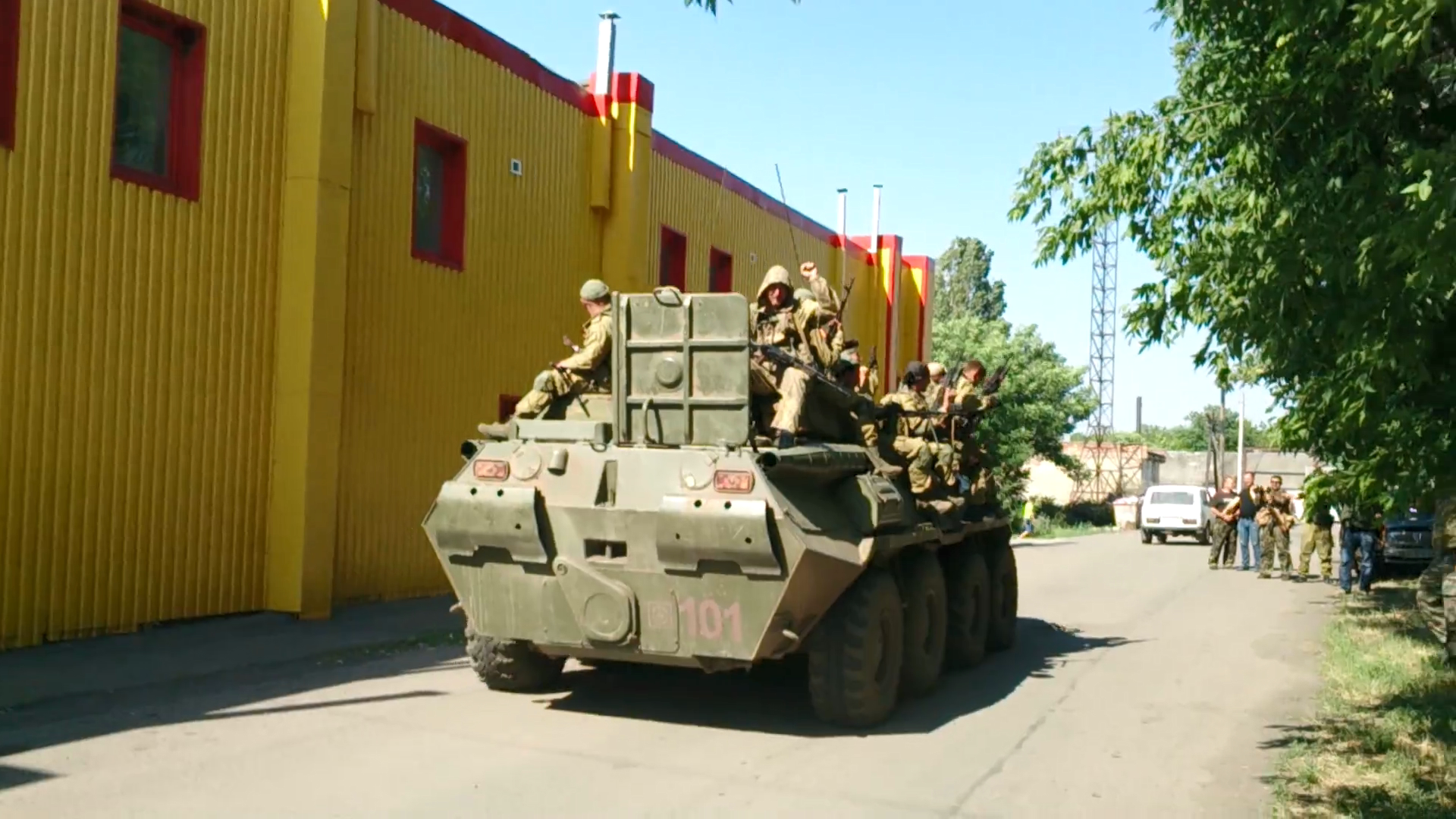 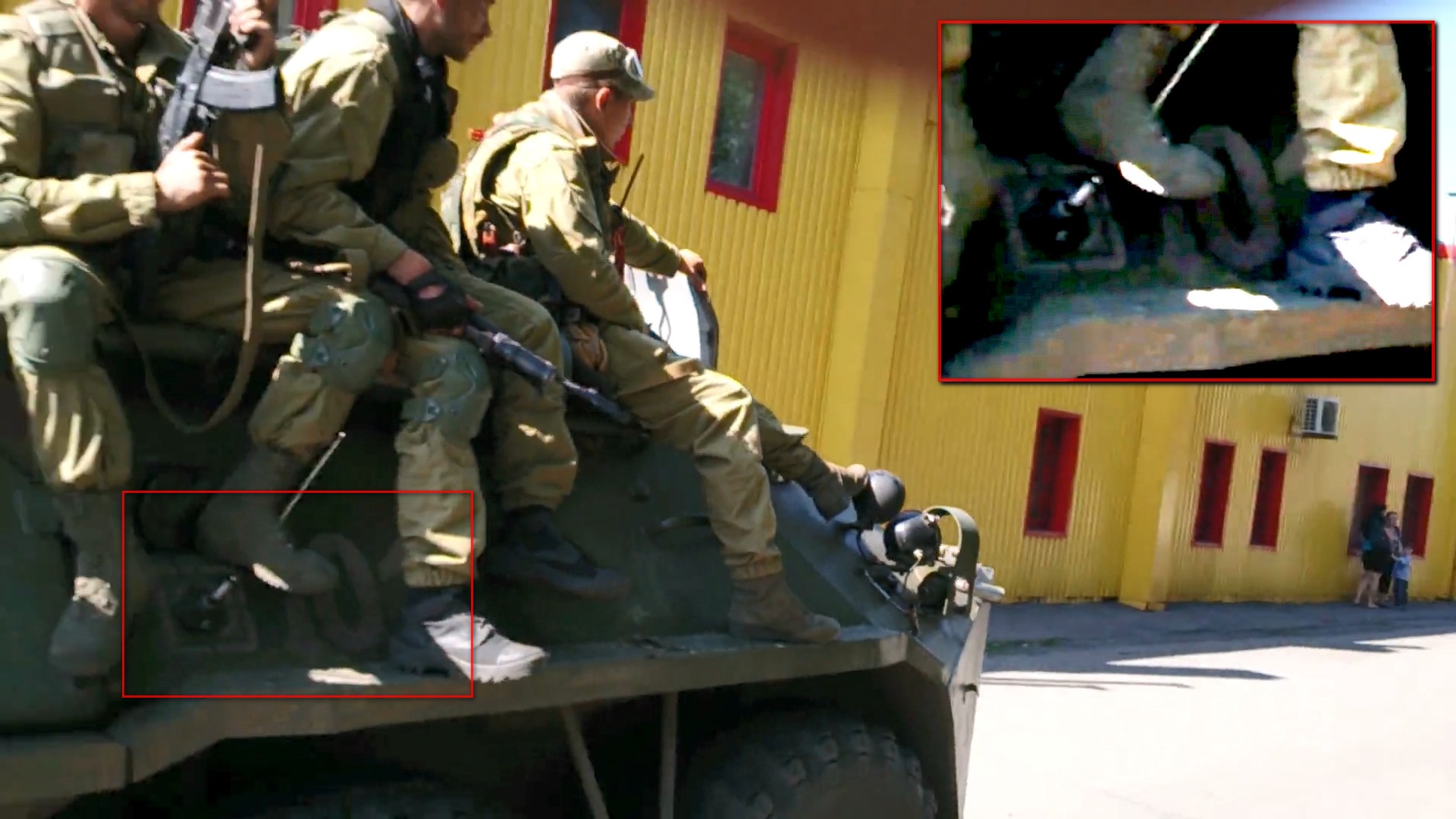 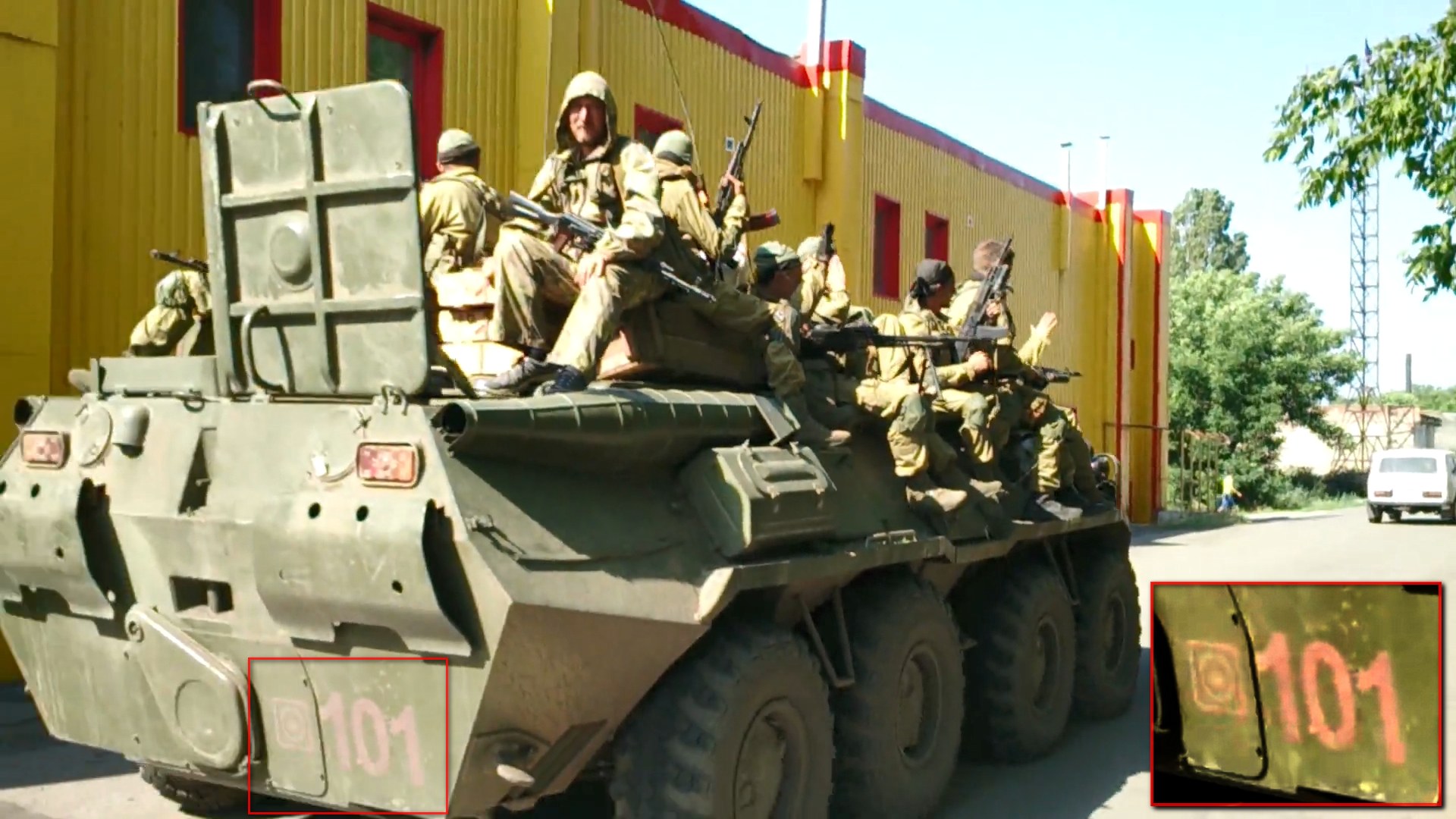 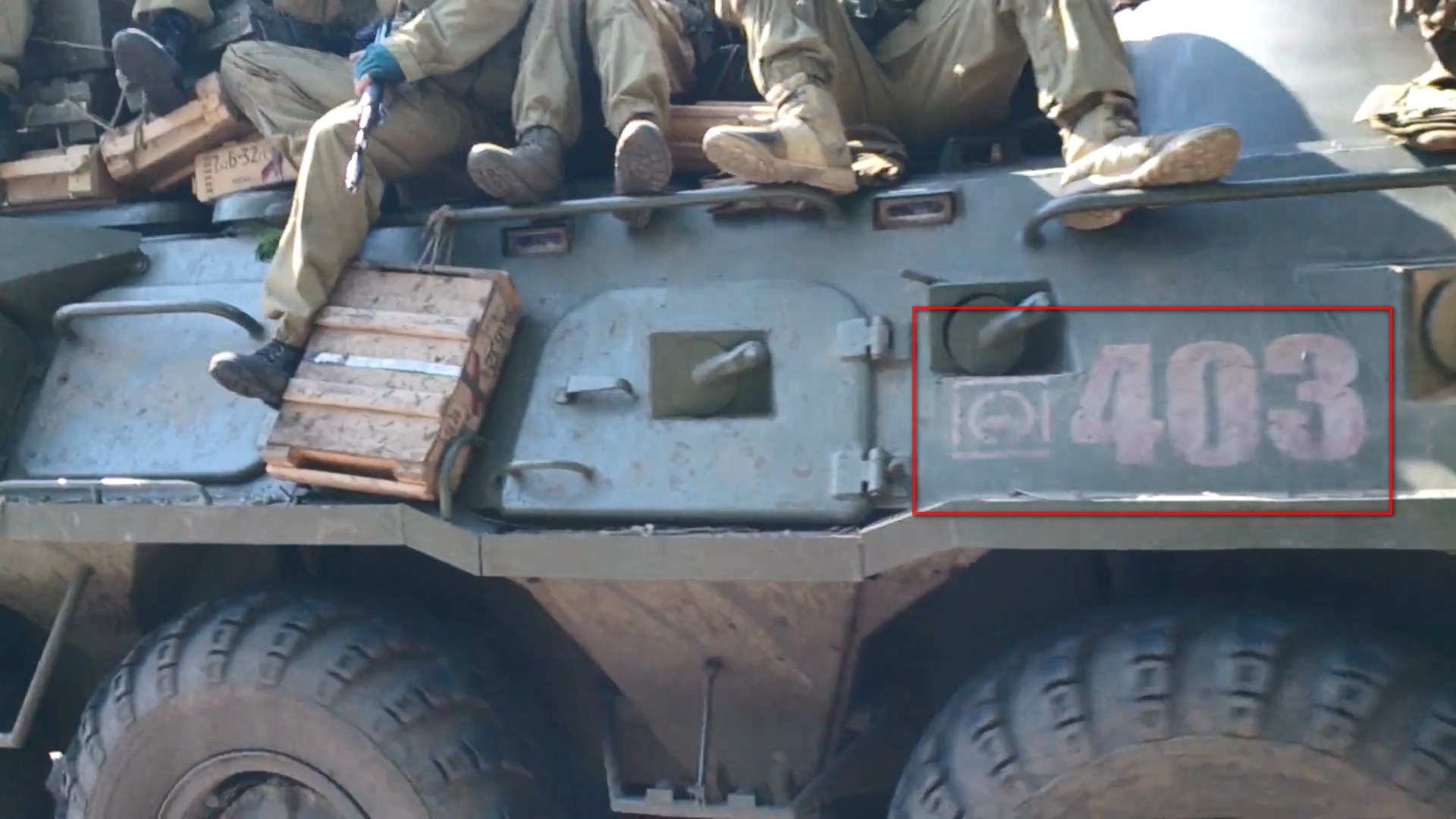 The exact spot of the armored vehicle column in the city of Snizhne next to Furshet supermarket (we are sincerely grateful to blogger Askai for his having identified the location and the tactical marking of the 11th Engineering Brigade of Russia’s Armed Forces). 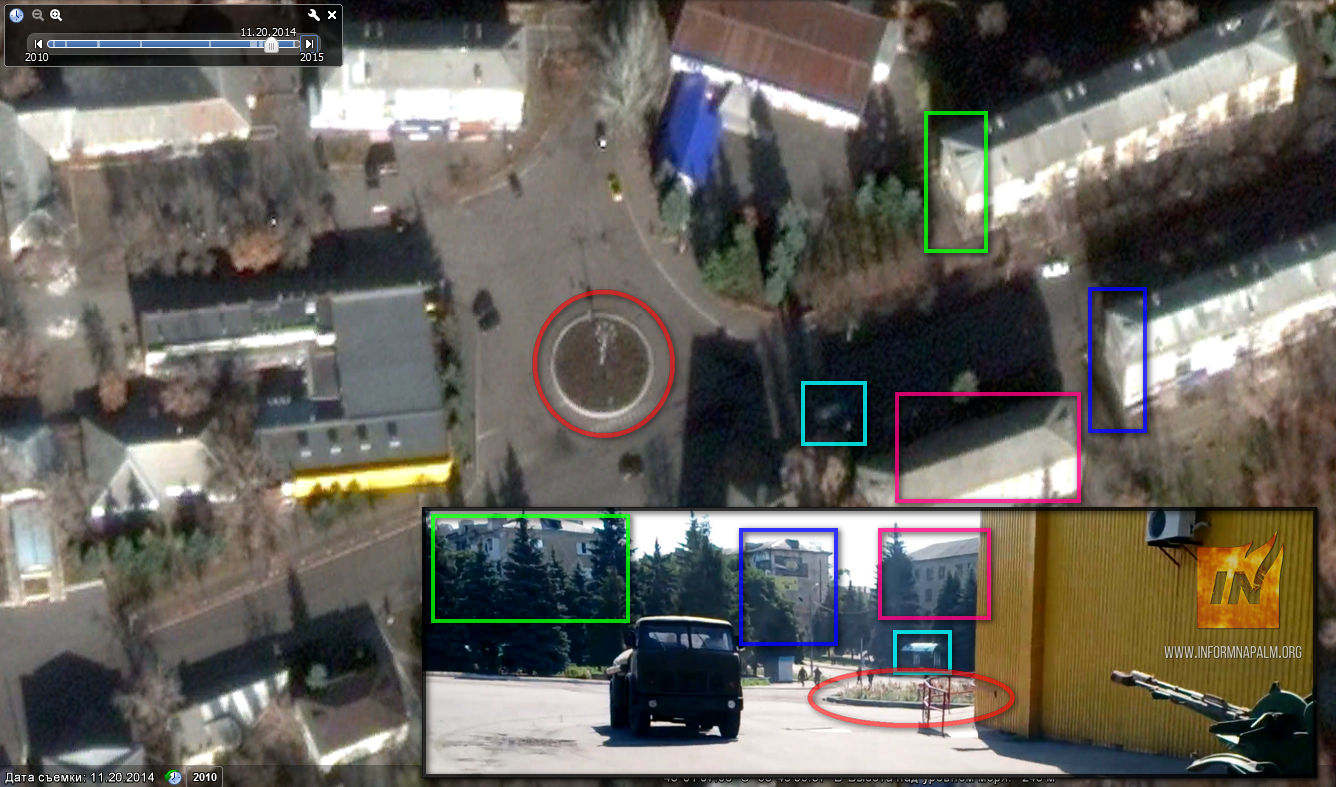 The next video was filmed on the same day. To confirm this, we compared some frames from both videos: The same people were riding the same vehicles. We invite the readers’ attention to the uniform, the equipment, and the poise of the personnel riding the BTR armored vehicles: By no means are they local coal miners in rubber boots and plastic hard hats. 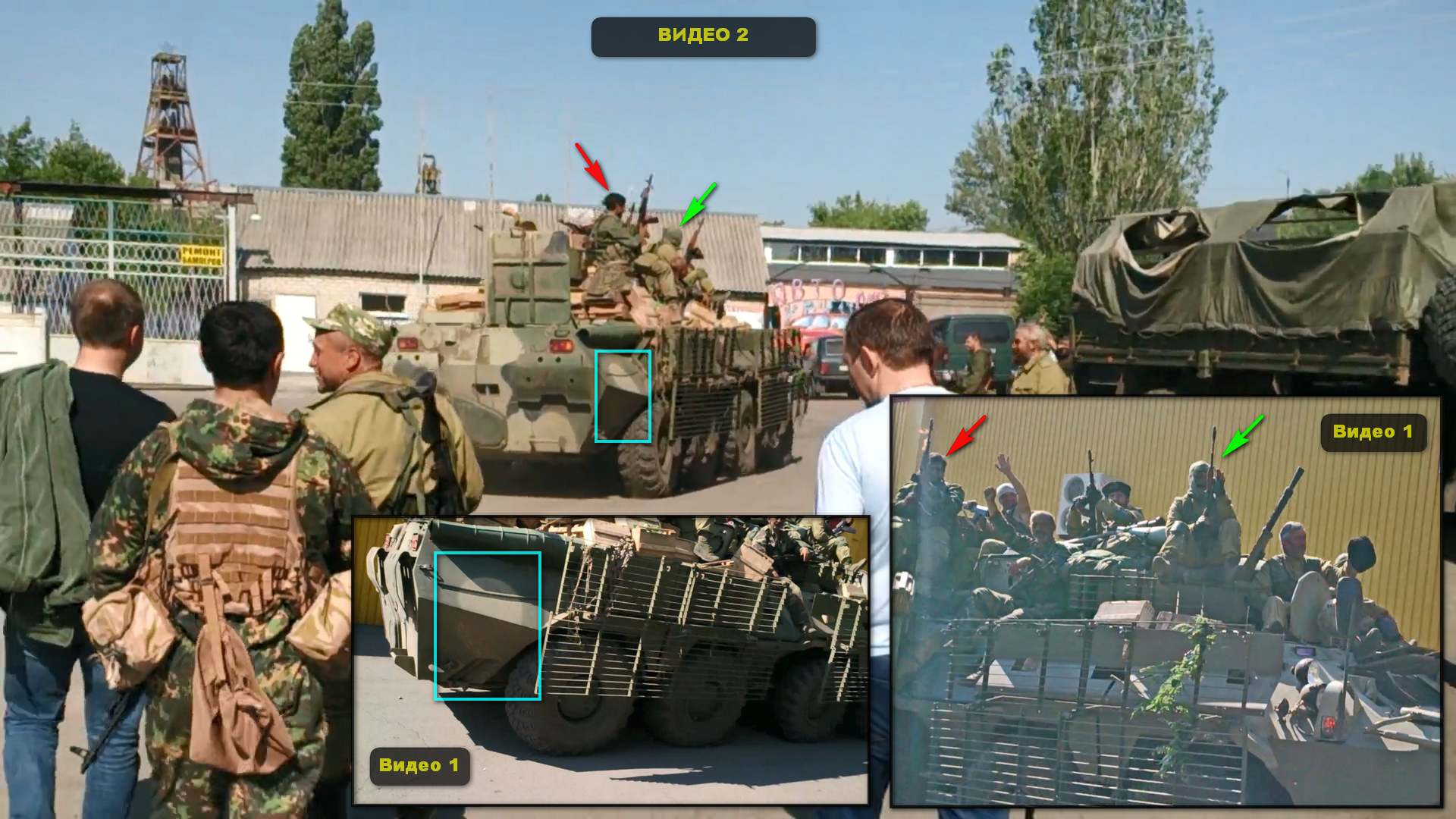 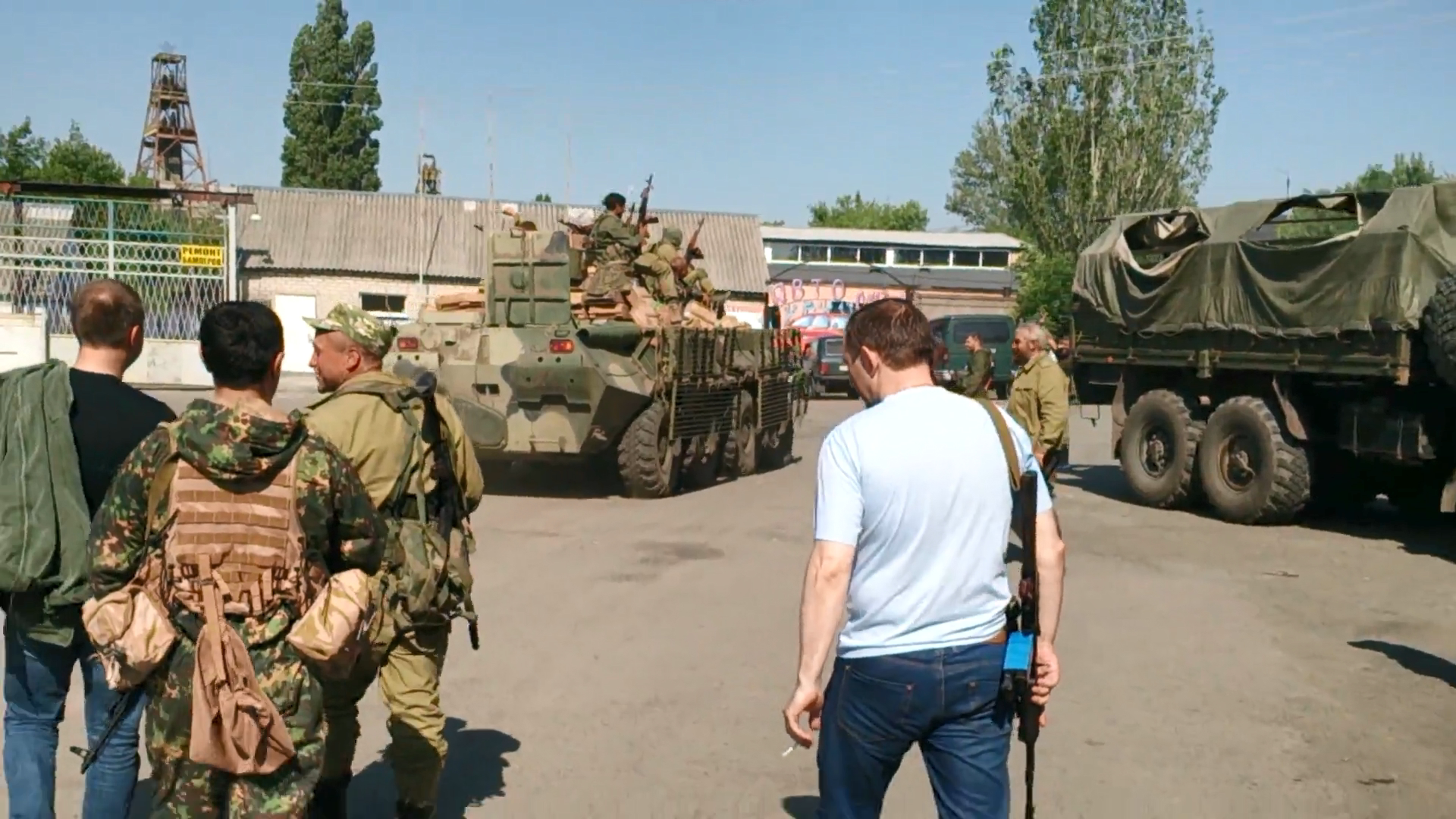 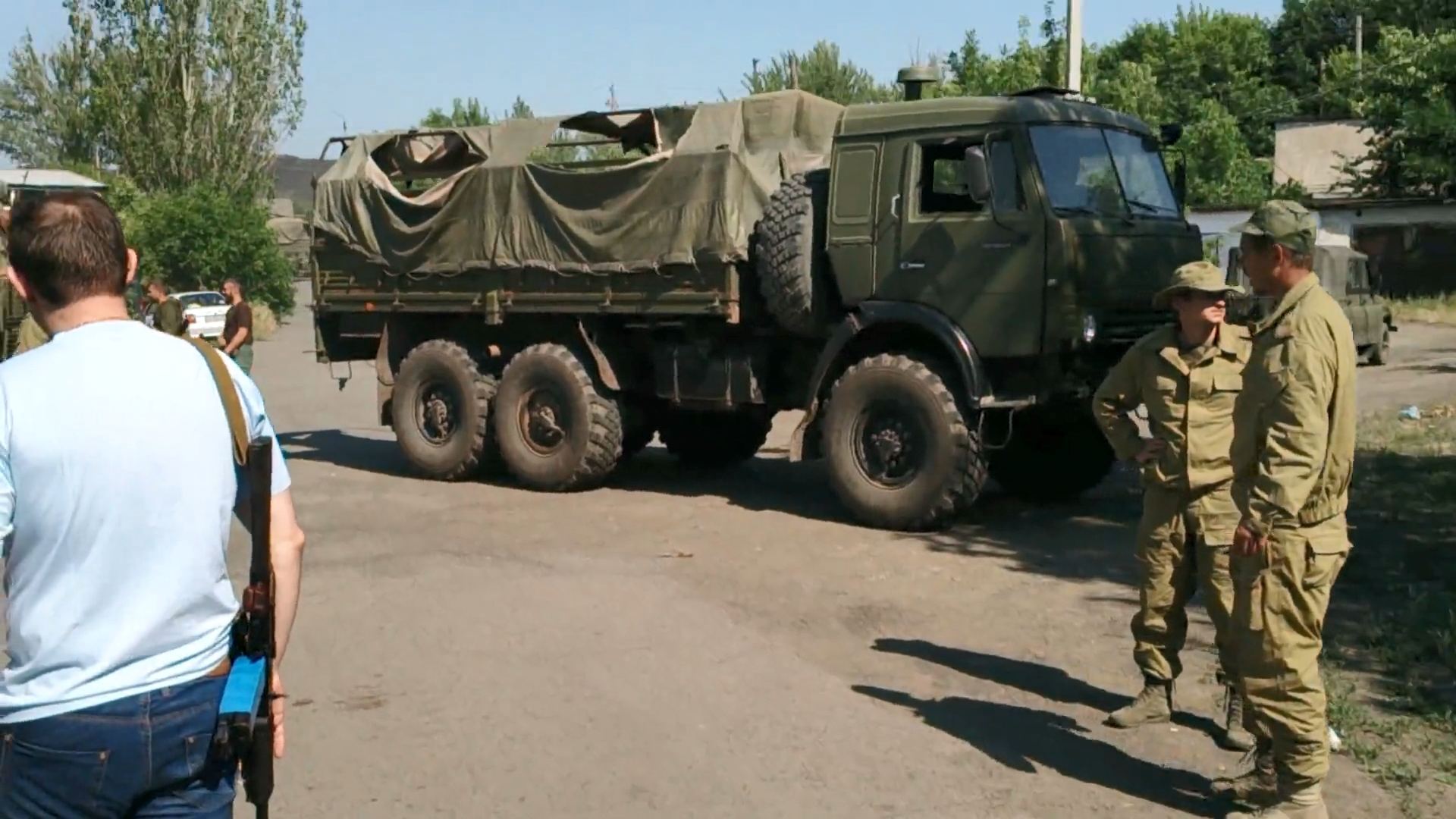 The location recorded on the second video was found somewhat farther from Furshet supermarket; the major bulk of the military equipment was moving to the nearby base of the Russian occupation forces.

Let us go back to the tactical signs of the 11th Engineering Brigade of Russia’s Armed Forces to show you one of the vehicles found on the video that had been parked earlier on the premises of military unit 45767 in Kamensk-Shakhtinskiy of Rostov Oblast.

The vehicles were compared using a photograph of a Russian soldier who served in this military unit in 2013.

The photos presented below and made public between December 2013, and April 2014 are obviously related to summer/autumn 2013. The photograph of a BTR-80 vehicle with a red tactical marking was published in April 2014 at the end of the compulsory service time of the author of this shot. 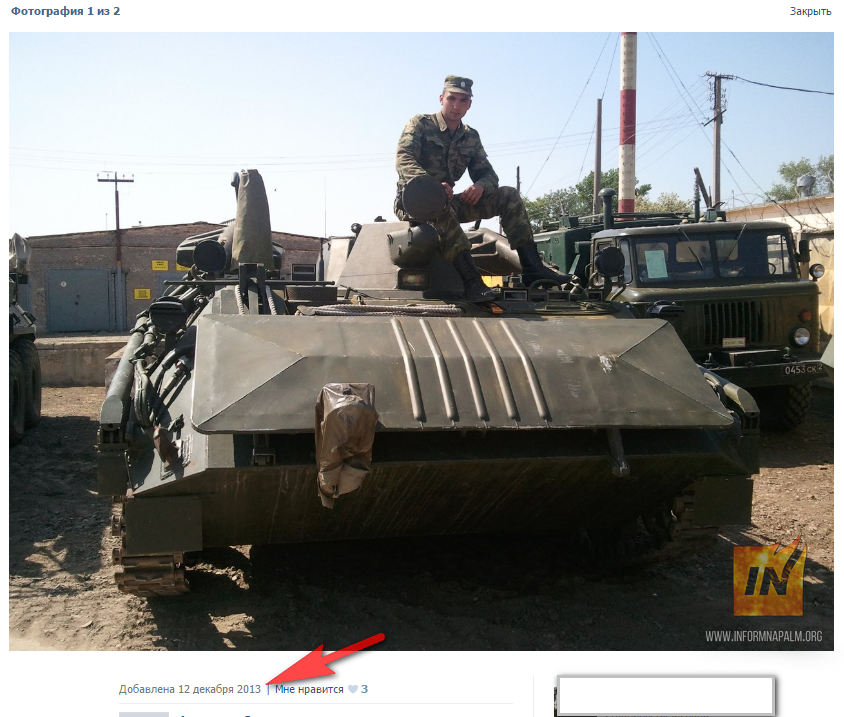 There are vehicles positioned in immediate vicinity of one another on several photos of the military equipment made by the Russian soldier. 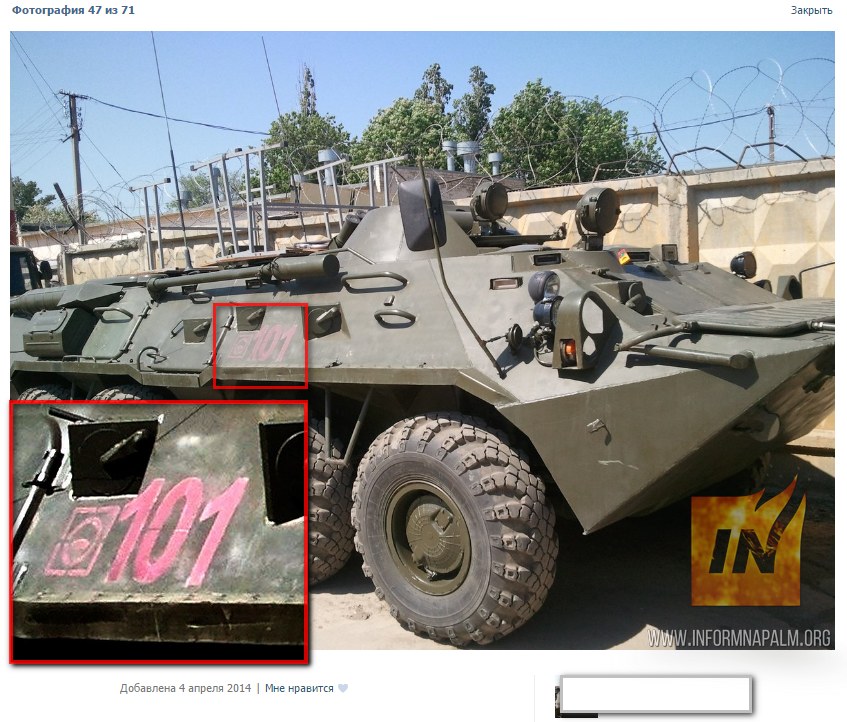 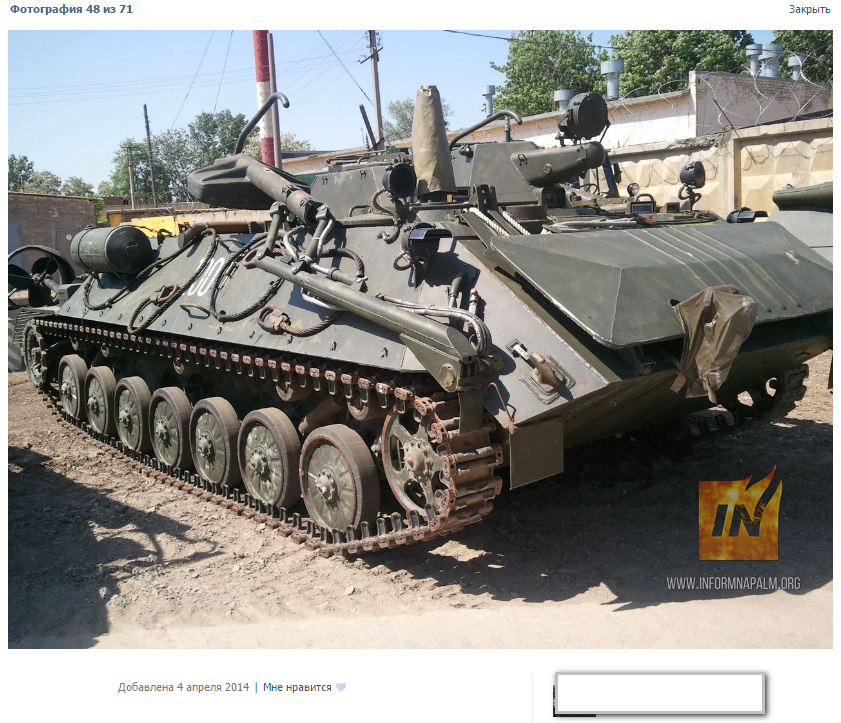 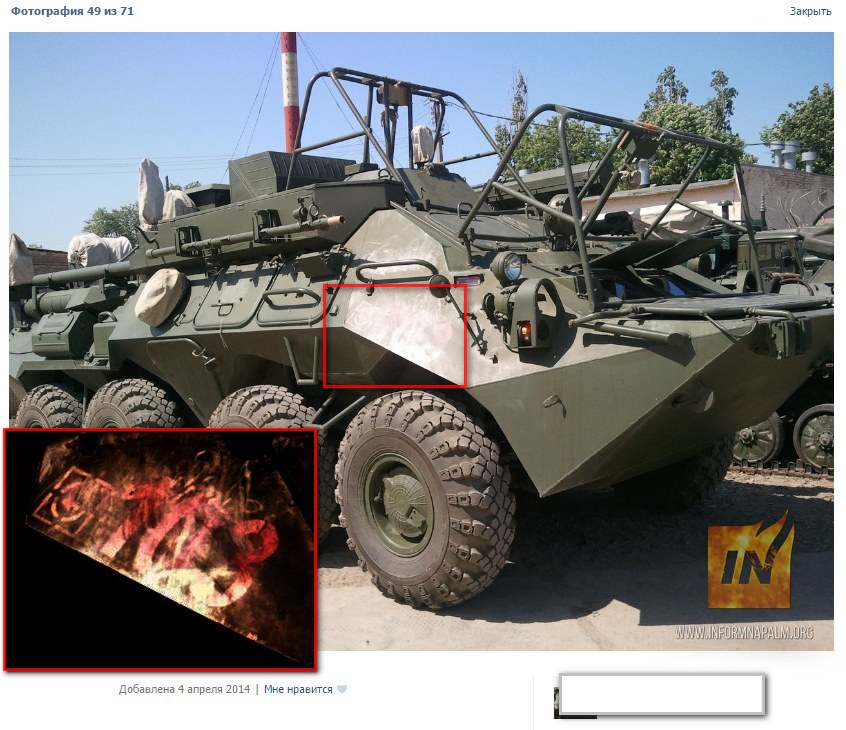 We have placed both photos next to each other to look into them better.

This location was identified as the of the BTR-80 armored vehicle bearing number 101 that had been parked in summer/autumn 2013 on the premises of military unit 45767 in Kamensk-Shakhtinskiy.

We identified unique features, such as joints as welded by the manufacturer and defects suffered in the course of the subsequent operation, while studying and comparing BTR-80 No. 101 as depicted in 2013 photographs from social networks and 2014 video frames. There is a scratch on the front right side in the bottom part of the armored vehicle. This scratch can be seen on many frames, and it is not an imaging defect.

Below, the scratch and the parts of the manufacturer’s welded joint are marked and can be compared easily.

No Responses to “Snizhne 2014: Armor of the 11th Engineering Brigade of Russia’s Armed Forces”