Terrorist War of the Russian Federation against Ukraine. Summary for September 15, 2014 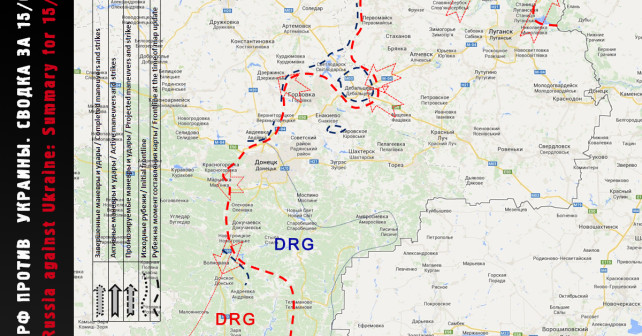 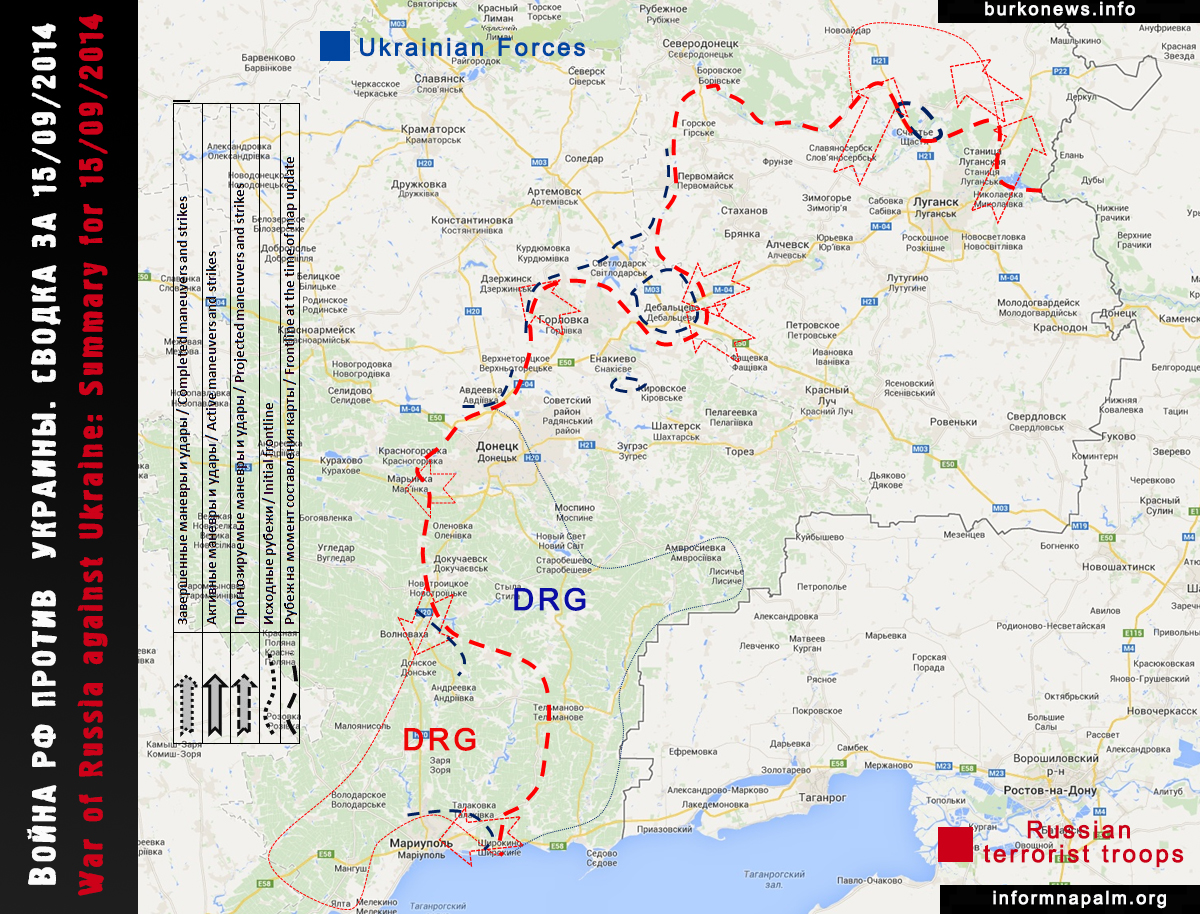 In spite of the “armistice” the Russian mercenaries continued shelling Donetsk airport over the past 24 hours using heavy artillery. Meanwhile the facility remains under Ukrainian control.

The enemy is also attempting to reach the airport from the north. For this reason they gather forces in Panteleimonivka. An attack from this areas allows them address to issues: their desire to straighten the front line by dislodging the Ukrainian military from Verkhnotoretske, and secondly to get complete control over the Horlivka-Donetsk highway.

For the airport shelling they use heavy guns (artillery) on tracked vehicles that we discussed in an earlier report. According to the preliminary data, over the last day and night the track assembly of one of the large-caliber guns has been removed from operation. The reasons are still being identified, but there is a chance of guerrillas’ action or that the Russian artillery team made a mistake and ran into Ukrainian response shelling. The Russians hide two other large caliber guns in Donetsk residential areas.

In addition large caliber mortar launchers of the type 2S4 “Tyulpan”, were noticed today in one of the Donetsk districts. These mortars are in operational service of the Russian Armed Forces. The large caliber 240-mm mobile mortars 2S4 “Tyulpan” belong to the reserve artillery of Supreme Commander in Chief of RF forces, and are designed to destroy fortified buildings and other tasks, which can not be completed by other types of artillery. The Russian forces smaller caliber artillery which was actively used by DPR militants have proved to be unable to break through the fortification held by the Ukrainian forces. It seems obvious that the “Tyulpans” have been brought in to continue the assault on the airport.

A second issue of significant concern is that these “Tyulpan” mortars are able to shell not only incendiary and guided projectiles, but chemical and neutron shells bearing index “Smola” and “Fata” and can also shoot such nuclear shells as 3B4 and 3B11 having a weight of 2 kt. Of course, using such type of weapons will be immediately recorded by satellite imaging. We are not saying the Russia intends using these types of shells, however such a possibility can never be excluded on the battlefield, especially considering the Kremlin’s growing appetites to test the world community. Recently the Ukrainian Minister of Defense Heletey stated that the RF was threatening to use tactical nuclear weapons against Ukraine.

Let’s remind that DPR terrorists in Donetsk also use an armored train with MRLS ‘Grad’ located on one of its platforms, which operates from the area of the Nitrogen plant and has also been shelling towards the airport. Why the tracks that the train runs on have not been as yet destroyed by ATO artillery or by other means remains a puzzle. Possibly ATO are being over passive with the “armistice”?

At the close of the day on the 15th ATO forces suffered casualties when a military convoy ran into an ambush on the way from Karlovka. Russian militants managed to destroy one Ukrainian armored vehicle.

Militants started offensive actions towards Debaltseve from the South and the East. The grouping of DPR forces that had concentrated in Zuevka was put in motion, as well as forces Bryanka. Let’s note that there is no “boiler” trap (encirclement) around Debaltseve so far, however DPR and their artillery systems work in that direction.

To the South of Donetsk the Russian and DPR maneuvering of their forces continues. It should be noted that according Zello channels, there is growing focus on the area nearby Volnovakha. Considering enemy actions in the area of Olenivka, we can expect further advances towards Mariupol with a purpose to create encirclement in the area of Starohnativka and Novoselivka. However, after the Ukrainian forces rather harshly dealt with the militants and regular armed units from Russia in the area of Shyrokyne, they have become much more cautious. At least, this was stated by people who live in Novoazovsk, who said that militants appear much more scared to advance. Most likely they did not expect such a reaction. This is likely one of the reasons behind the delay of the offense on Mariupol.

The militants in Horlivka continue to build up their forces in the western direction.

In the territory controlled by the terrorists we observe intestine clashes and confrontations with the aim to control cash flow. It is possible that soon we will see development of separatism among separatists themselves, or maybe we will even see “separatism cubed”. Stakhanov has become a pioneer in this scheme of development of small “feudal states”. The Stakhanov militants announced their disaffiliation with the “Luhansk People’s Republic” terrorist organization and proclaimed creation of their own territorial unit of “Cossacks of People’s Guard of Stakhanov”, not recognized by anyone else.

Provided that half-decay rates of the Donetsk and Luhansk People’s Republics remain the same, in the nearest future we will observe “Antratsyt Empire”, “Sverdlovsk Reich” or even “Krasnodon Quasipower”.

Oddly enough, the reason for the lack of unity among the insurgents is the policy of the Russian Federation: replacement of the warlords, direct centralization of control tied to the Kremlin, elimination of undesirable people by the Federal Security Service (FSB). All these things raise concerns of the local “kings” and they have to bite the “hand of the Kremlin” that feeds them (with weapons, ammunition, equipment, supplies). We see the classic principle of a snake that bites its own tail in the action.

Anticipating further developments, it is safe to say that the future escalation of the conflict with the intervention of the third parties is inevitable because the Russian Federation finds itself in the position of a cornered rat and is now forced to take the final shot. In this context, one should pay special attention to attempts of Russian secret services to destabilize the situation in Kharkiv and Zaporizhia. Orders to sew large parties of Zaporizhia and Kharkiv People’s Republics symbolics, emergence of agitators promoting separatist ideas and preparing the ground for new “unrecognized republics” — all these facts are alarming and require appropriate measures to be taken.

In this vein, not only the southern, but the Kharkiv direction as well, can serve as a base for the full scale outright invasion. Such development can only be prevented with efficient work of all law enforcement agencies and uniformed services.

The time has come to begin to talk about victories, which are achieved due to smooth interaction between “InformNapalm” volunteers and one of the units of the Armed Forces of Ukraine. The work of volunteers ans insiders of the team is often fraught with great risks to life and health and this is why we cannot disclose all the nuances. We just say that for the past day 2 armored personnel carriers and 3 guns of militants have been destroyed basing on the information and coordination supplied by our volunteers.

2 Responses to “Terrorist War of the Russian Federation against Ukraine. Summary for September 15, 2014”