Citizens from the Oblasts (regions) of Kherson and Zaporizhia have been volunteering to build new defenses against an expected Russian invasion.

In the Kherson Oblast volunteers worked on building defenses around the Kakhovka Hydro-electric station, along the main electrical substations, and along the North Crimean Canal. Major Vladimir Kovalenko advised journalists that this infrastructure is considered a strategic installation.

It was reported that approximately three kilometers of trenches had been dug by approximately 500 volunteers on the 7th and 8th September in order to defend the approaches to the town of Nova Kahkovka. It was reported that people are digging trenches, building dugouts and improving positions. Local people say that Russian occupants constantly spy at the actions of Ukrainian troopers – almost every day over the Chaplynka and Kalanchak villages they can see Russian helicopters and UAVs. 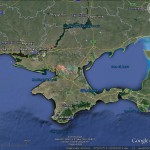 Channel 5 reported that the spokesperson of the Information Center of the National Security and Defense Council Andriy Lysenko said that Russian troops are improving checkpoints close to Strilkove village in the Kherson Oblast.

Journalists were also advised that work on improving defenses is also taking place on the Donetsk side of the Zaporizhia Oblast as well as on the Crimean side of the Oblast.

Translated by Eugenia Zlamanuk, summarized and edited by Larry Field