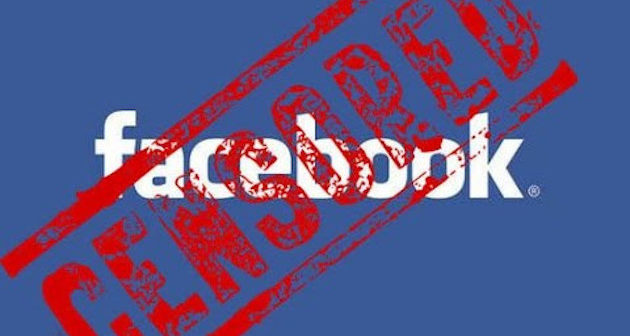 It’s a neverending story… It seems like we are trapped in an eternal FB-ban and Facebook admins do not even plan to take another look into the situation.

Precisely after five days upon my last 30-days ban my account has been blocked again. And once again, the reason was one of the “ban words” in a minor comment dated 2014…

It seems like the Russians have occupied Facebook – the Kremlin has already managed to pull the same scheme with Russian-language Wikipedia where no single article on military, historical or political topic contradicts the official “party line”.

We must not ignore these bans, their aim is obvious – and it is not about the bans themselves. The goal is to delete our accounts and wipe out all information since 2014 – the beginning of the Russo-Ukrainian war.

“There has been no war, how can you prove it?!” – this is what we will hear if we don’t put an end to this arbitrary treatment that denies one’s freedom to hold opinions.

No one will protect us unless we take action to protect ourselves.

This is the reason why I composed this petition to Facebook administration:

Dear Board of Directors, Supervisory Board and shareholders of Facebook,

Back in 2014, when the Kremlin started its war against Ukraine with not only boots on the ground but also through the use of massive disinformation, Facebook was the only channel for us to break through the web of Moskali-fabrications and reveal the truth about Ukraine to the world. And all of us are immensely grateful to Facebook for this fully free opportunity to distribute information among hundreds of thousands of people around the world.

The fact that the proofs of the crimes committed by Moskal-state can be gathered and shared on social networks – with no need to engage publishers, journalists, and other centuries-existing information institutions – has beсome a real game-changer in the information field. Not only has it forced journalists to adjust and reconsider their ways to presenting information, but it has also surprised the enemy unable to predict the rise of volunteer movement both at the real frontlines and on the Internet. All of a sudden the Kremlin found itself facing fierce resistance in the combat for people’s minds.

The balance of forces at the information front and in the field was about the same – we were a patchy, half-clothed bunch with a couple of handguns against best armed armadas like RT, RIA Novosti, and Russian Channel One with millions of audience and gazillions of dollars to spend on propaganda. We know that 10% of Facebook stocks also belong to DST Global investment company owned by the Russian billionaire Alisher Usmanov, Putin’s close friend and business partner, and a number of Usmanov’s Mail.ru ex-employees are now working as admins in Facebook Dublin office.

Apparently, Facebook does not take into account the fact that ‘Russian speaking’, by far, does not stand for ‘Russian citizen’. Due to the years of Russianization, mostly forceful, every former citizen of the USSR speaks Russian – it does not keep us from being adversaries of Russia, and we constitute almost 50 % of all Russian-speaking Facebook users. We know that you were getting and keep getting complaints from pro-Ukrainian users, not to mention the official note from Ukrainian government in 2015. The situation when moderators with Russian citizenship determine the “Facebook-fate” of Ukrainian and even Ukrainian-speaking users is absurd. We keep wondering why Facebook does not take any steps to fix this bias despite being well-informed about the infowar that Russia is waging against the entire civilized world, using Facebook as one of the battlegrounds.

We live in 2018. We already saw Kremlin’s interference into American elections in 2016, Russian hack of German Bundestag in 2017, and Kremlin’s cyber-attacks on government institutions of other Western countries, and yet, dozens of Ukrainian and pro-Ukrainian Facebook users who stand against Russian information war have been jumping from ban to ban for the third month in a row and cannot access their accounts, which robs them of the possibility to counter Russian propaganda. Moreover, they risk losing their accounts completely, which would mean the wipeout of 2014-2018 chronicle from the public domain… The known defects in Facebook banning scheme allow blocking activists’ accounts for the comments and posts made 2-4 years ago.

Facebook Support always names “incitement of ethnic hatred” as the primary reason for account deactivation. However, the grounds for such accusations are the same words that someone has put on the “ban list”, such as “москаль” (“moskal”), “кацап” (“katsap”) and “русня” (“rusnya”). You can find out more about the etymology and meaning of these words in the article “Москали”, или как алгоритм фейсбука блокирует пользователей на основании стоп-слов. To put the contents of the article in a nutshell, these words were not even invented by the Russians, they all come from the languages of the nations neighboring Russia, and two of these words are at least 2 hundred years old.

Facebook is an American company, and Freedom of Speech has always been one of the fundamentals of the American society guaranteed by the First Amendment to the U.S. Constitution.

Still, American legislation is not the only legislation that restricts prosecution for verbal expressions. In 2017 Hamburg Court issued a ruling stating that “in order to define the crime as the one referring to the article ‘Incitement of ethnic hatred’, the statements should be made about a group of people that significantly differs from the general mass of population”, therefore individuals cannot be prosecuted for the expressions about, let’s say, “all Germans”. This court ruling hardly plays into hands of Facebook administration that once again just recently blocked a pro-Ukrainian German for 30 days for one of the above-mentioned words in a comment dated 2014 (!).

Besides that, it is obvious that any particular word cannot promote ‘incitement’ – a word is always just a part of a wider context. It can be a part of a quote, sarcastic phrase, allegory – the word itself cannot be ‘prohibited’, if we are talking about free society, of course, with Facebook community being a part of it.

It comes to ridiculous cases when Facebook deletes short stories of Ukrainian writers published on Facebook – solely for the mention of one of these words in their texts. This reminds of book burning, and we all know too well who and when was burning literary works (and even then the books were not burned just for ONE SINGLE word). We are far from the idea that Facebook wants to claim the place next to the world’s top criminals.

Apart from all mentioned, there is a clear intention behind the blocking of our accounts:

All of this proves meticulous work of Kremlin’s shiftmen that strive for total annihilation of any alternative Russian-language (!) opinion on a worldwide social platform like Facebook.

Thereby we advocate for assigning several Russian- and Ukrainian-speaking administrators to audit and review all recent bans of popular Russian- and Ukrainian-speaking bloggers. We also request to revise the algorithm of applying Community Standards to specific cases, as far as the current process contradicts one of the fundamental principles of the democratic society – the Freedom of Speech. Rather on the contrary, the effective Facebook policy undermines our constitutional rights and currently is only beneficial to the Russian authoritarian regime.

We kindly thank you for your time and for the platform that has become a second home to many of us and made a huge contribution to countering of the Russian aggression. We strongly hope that Facebook will remain to be a platform for free, intelligent people that oppose any dictatorship trying to restrict their rights and freedoms.

This publication was prepared by Irina Schlegel specially for InformNapalmDeutsch; translated by Volodymyr Chernenko; edited by Christina Dobrovolska.

No Responses to “On banning of pro-Ukrainian Facebook users”