The 810th Brigade’s Marines in the Fields of Donbas 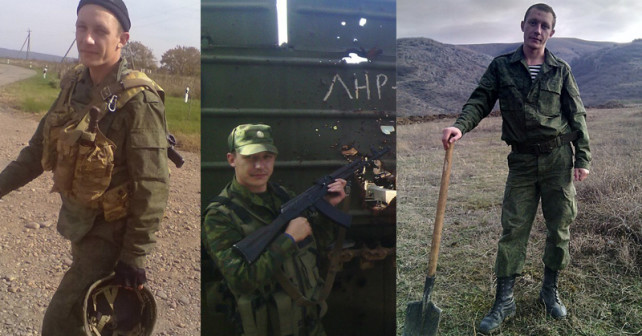 We continue the OSINT investigations of the Russian army participation in the war in Donbas. All the found facts are gathered in a summary database ‘Professional Russian Army in Ukraine. Database and Visualisation‘ which is periodically updated.

Aleksandr Sokolenko, a serviceman of the 810th separate marine brigade of the Black Sea Fleet (military unit No. 13140, Sevastopol, occupied Crimea) is in the spotlight of our new investigation.

Several facts prove that Aleksandr Sokolenko is both an active serviceman and the marine of Russia’s Black Sea Fleet. Looking through his photo album named ‘Nature of work – MARINES’ with the pictures from November of 2014 would be enough. Sokolenko’s friend list, besides ‘Novorossiya’ militants, includes also his brothers-in-arms from the 810th brigade with a renegade Yuri Oryabinsky among them (check out the photo album archive).

The most notable pictures from Sokolenko’s album which prove his belonging to the Russian army: 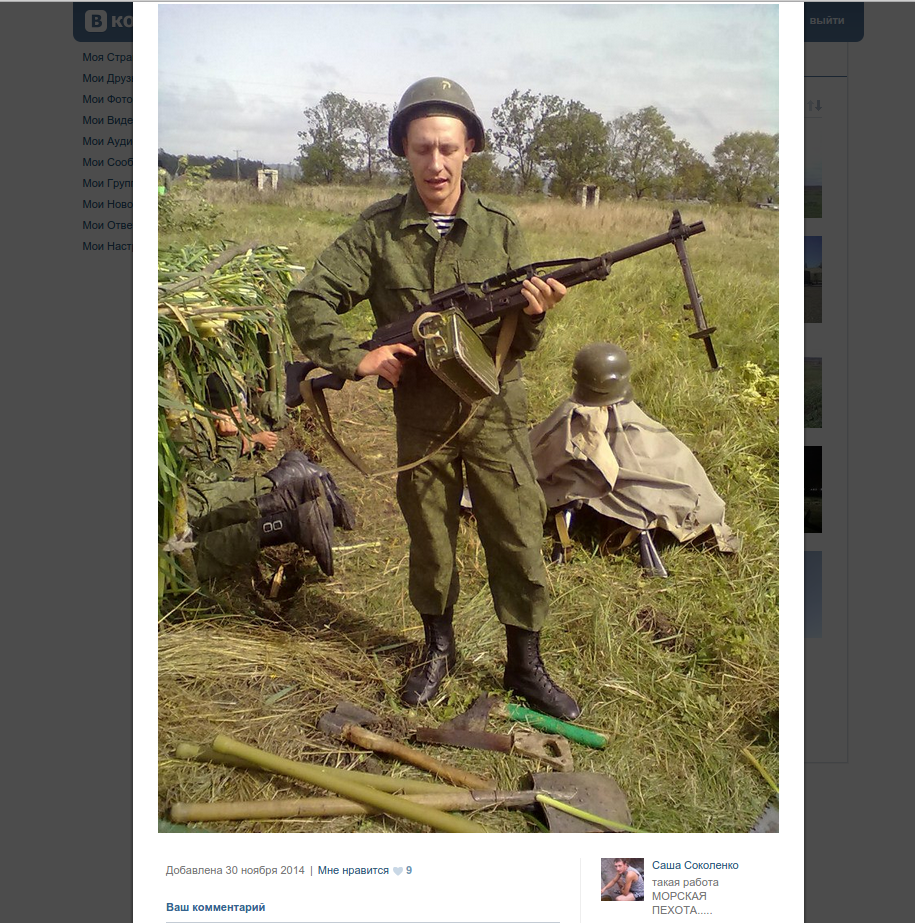 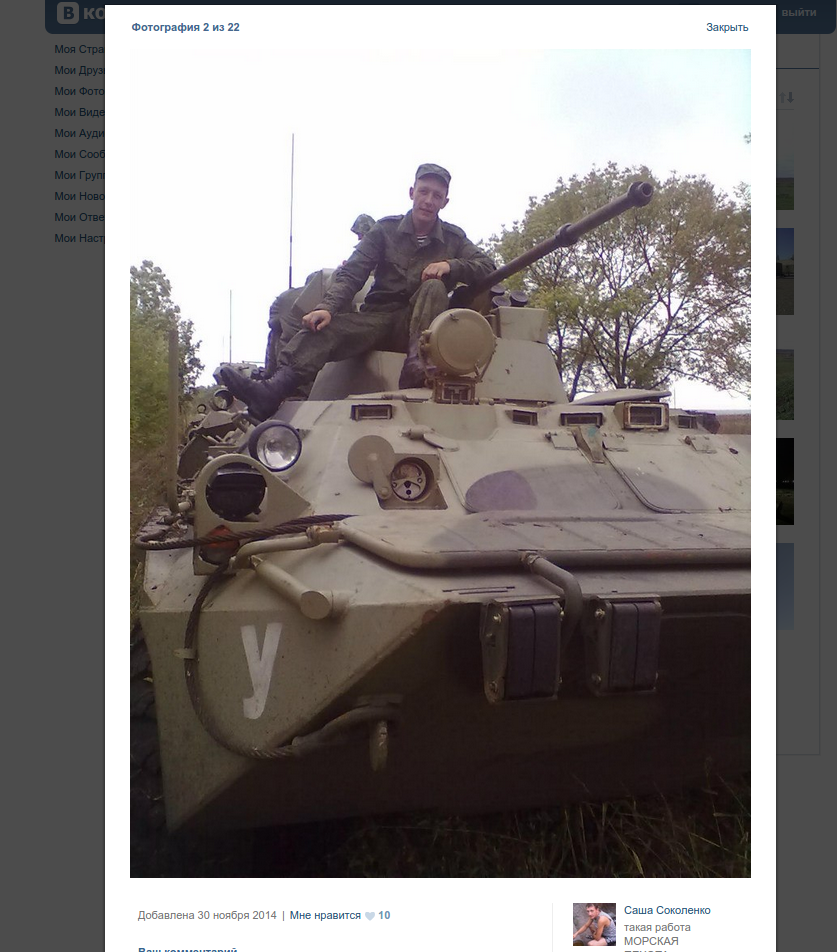 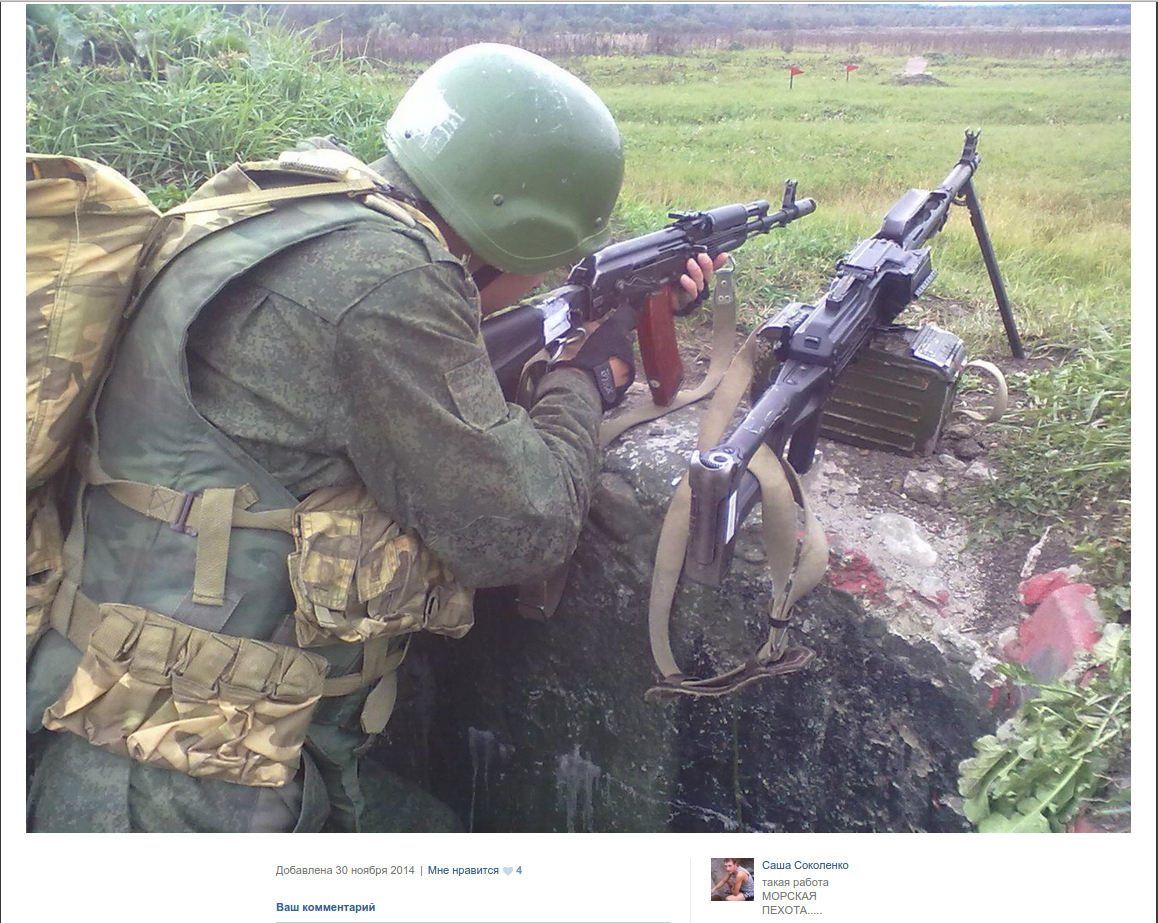 The pictures which appeared in Sokolenko’s album in 2015 developed the theme of the Russian army presence in Ukraine.

Aleksandr Sokolenko uploaded a photo with ‘Metallurgov ave., Alchevsk council‘ geotag on April 23, 2015. He wore an old t-shirt with the Russian army ‘Flora’ pattern and the red arm badge ‘On duty’. 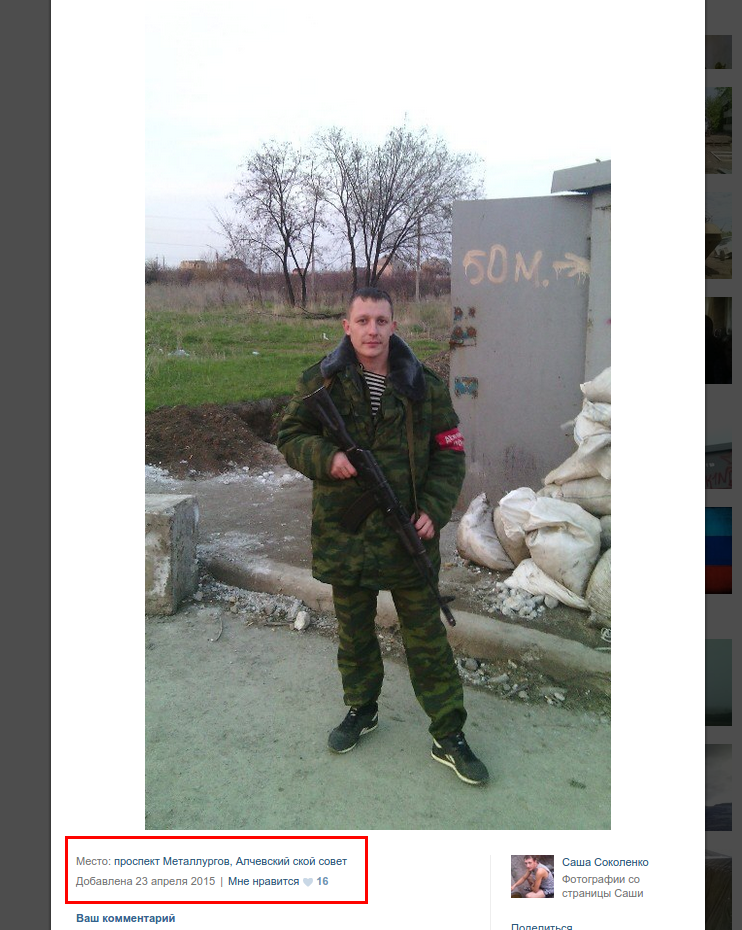 A little bit later, having celebrate the 9th of May [Victory day], Sokolenko adds a ‘heroic’ photo with the ‘Victory park, Alchevsk, Ukraine‘ geotag and the comment ‘Aviation is with us!!!’ 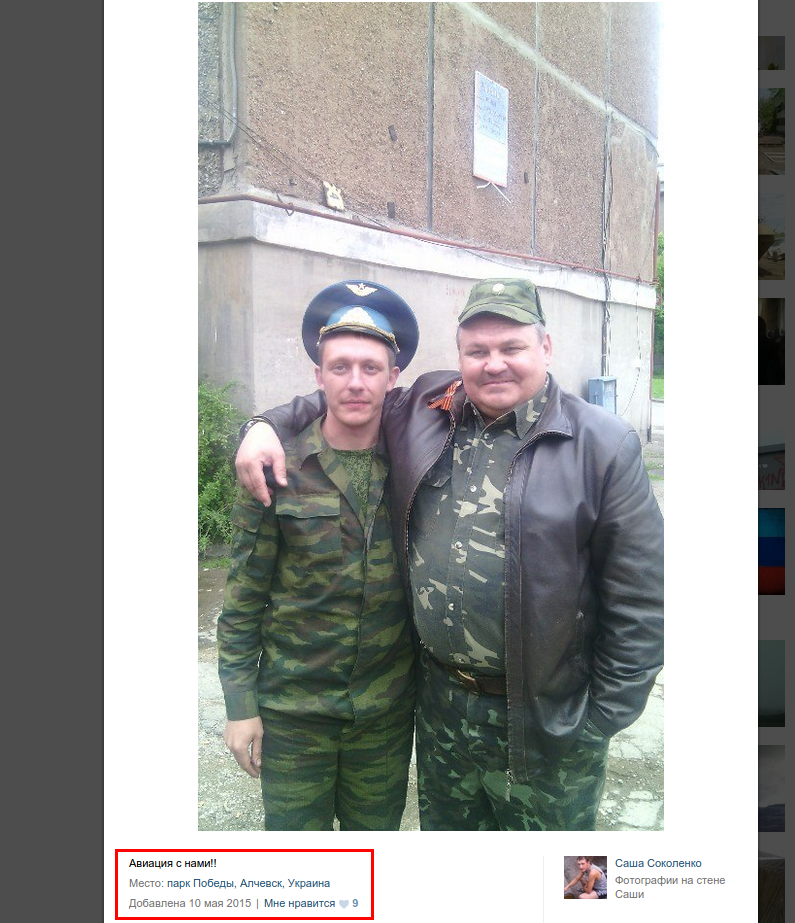 And closer to the end of his ‘Ukrainian assignment’, Sokolenko uploaded a set of photos in front of a burnt PTS-2 (medium amphibious transport vehicle) with ‘the village of Krasnodon, Ukraine‘ geotag on May 14, 2015.  The last picture of this PTS-2 was uploaded on August 29, 2015. 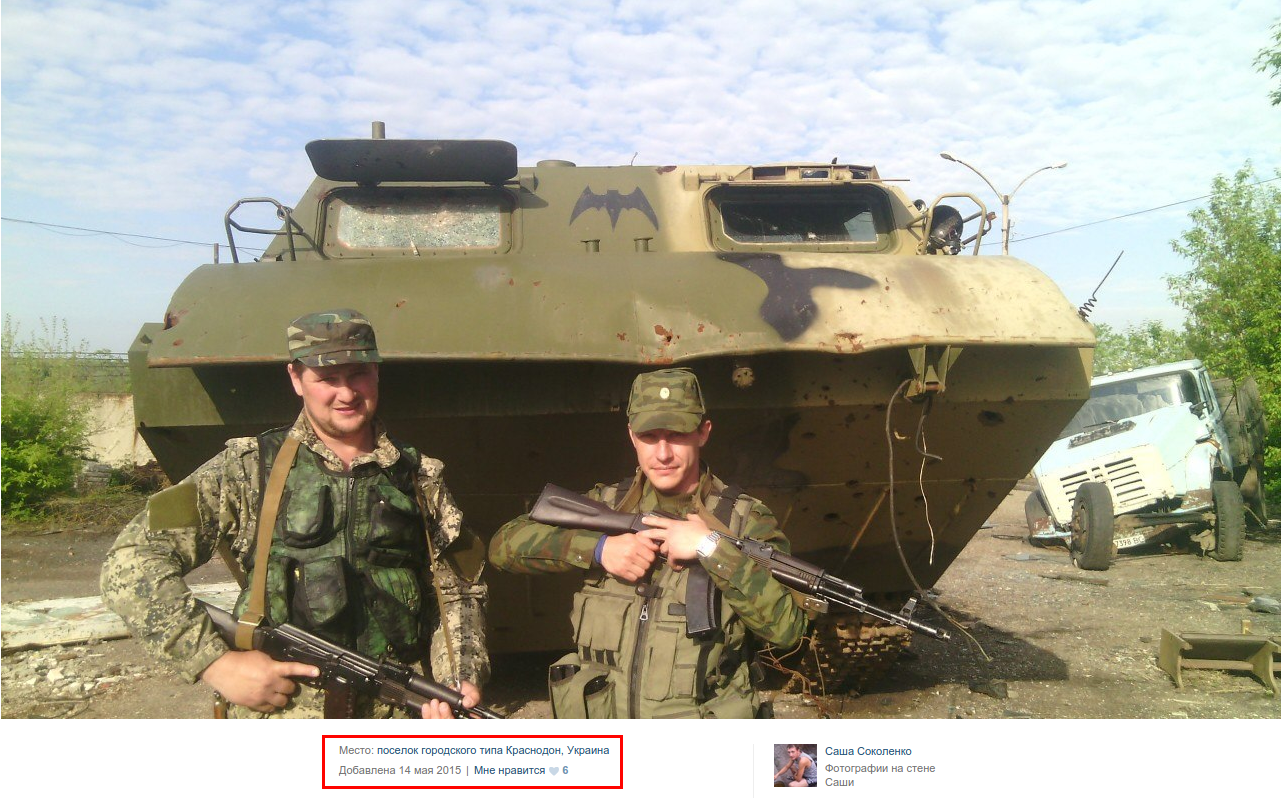 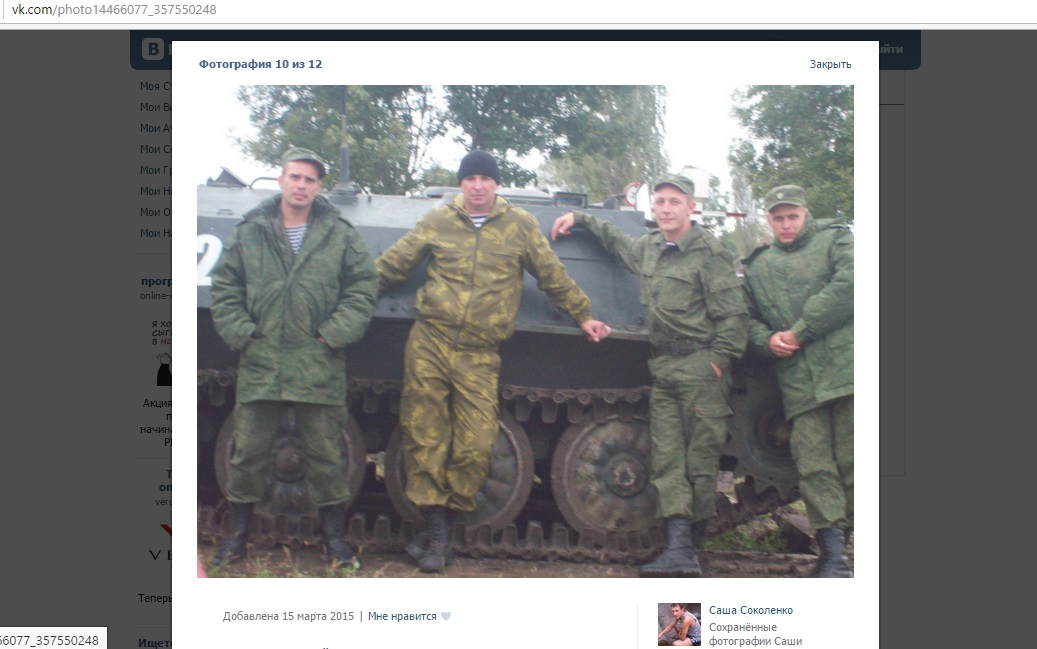 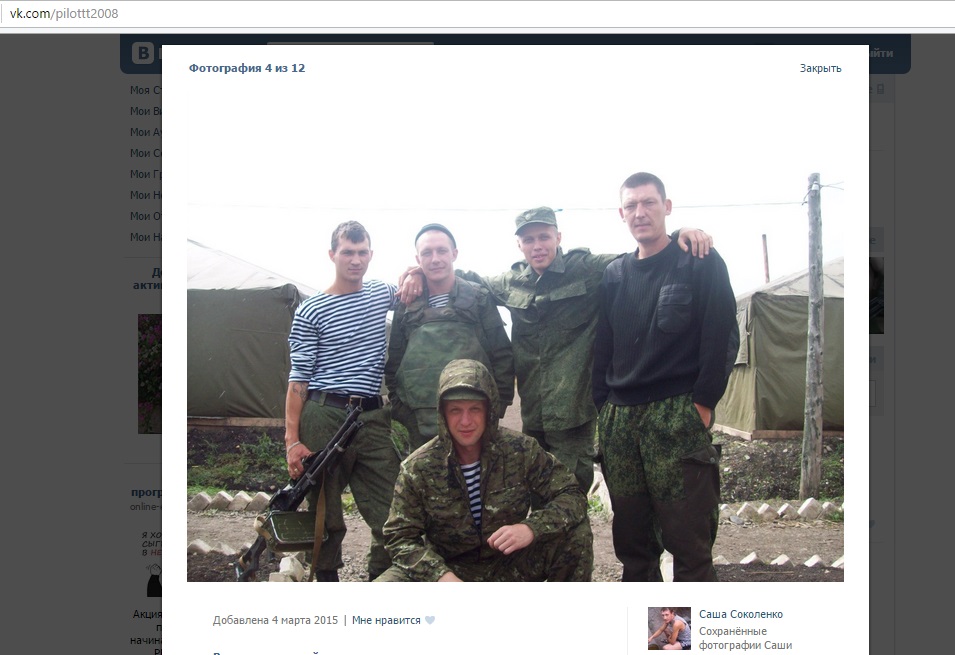 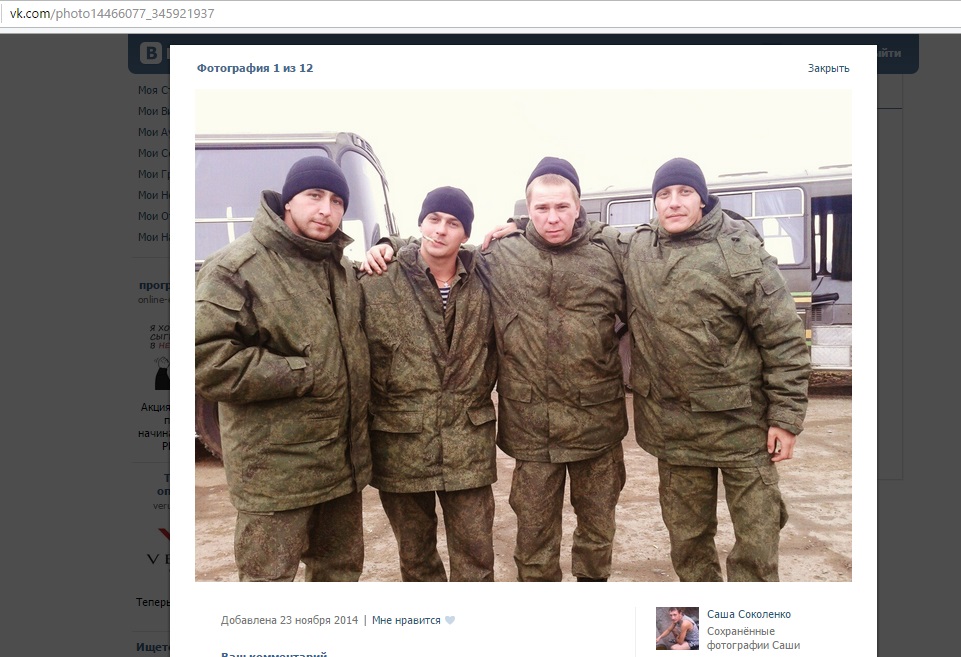 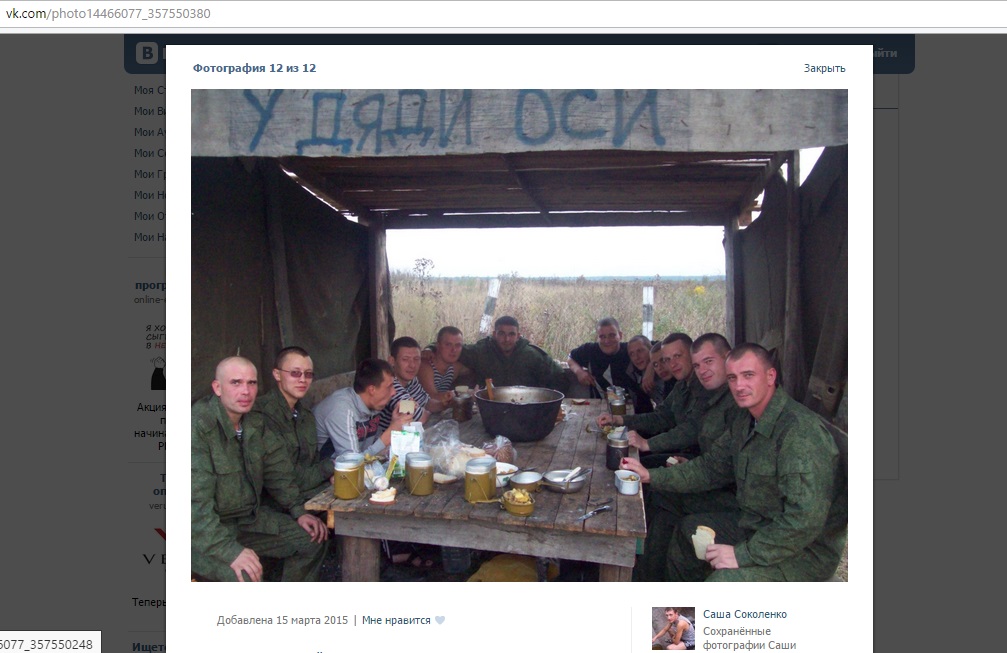 It is worth noting that this character has already come in view of OSINT investigators. But only now, having additional photos and profile data, we can prove that he is an active serviceman.

As you know lately the focus shifted from the Russian servicemen (the 810th brigade’s marines, in particular) participation in the war in Ukraine on their combat missions in Syria. It may happen that Aleksandr Sokolenko will visit that flash point as well. We are looking forward for new photo and video reports of this ‘soldier of fortune’ fixing Russia’s traces of crime.