Another Russian FLAG item: the “Pantsir-S1” Close Air-Defense System which is known to be in Ukraine 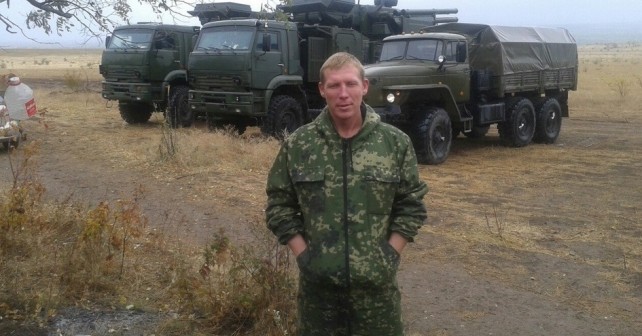 The Russian anti-aircraft missile and gun systems Pantsir-S1, shown in these photos, were observed in Kamensk-Shahtinsk district of Rostov region, near Donetsk, Russia, situated on the border with Ukraine. The photos were uploaded to the social network photo album of the Russian soldier known as “Paul” on December 10, but they were taken in late fall of this year. These anti-aircraft systems, similarly to other Russian military equipment deployed towards Ukraine, have no identification symbols or license plates. However it was possible to identify them as belonging to the Military Unit 61996 – 606th Air Defense Missile Regiment, based in Electrostal, Moscow Region. Photographs of these air defense systems attracted our attention for several reasons. Back in August the deployment of Pantsir-S1 to the Ukrainian border was reported in the media, and subsequent reports stated that these systems had been observed in Donbas. This was also confirmed by the US Ambassador in Ukraine, and was similarly recorded in the ARES report “Raising Red Flags” (FLAG items being weapons not used by Ukraine and being exclusive to the Russian military). During the same period, Ukrainian Air Force suffered heavy losses of helicopters and airplanes, which had some protection against MANPADS, but still appeared to be easy targets.

Unit overview: The 606th Air Defense Missile Regiment, Military Unit 61996 has been based in Elektrostal, Moscow Region since 2000. By 2010, the regiment had been reequipped with the S-400 Triumf anti-aircraft missile system, along with Pantsir-S1. The primary mission of the Air Defense Missile Regiment is protection of the objects of state and economic importance, as well as control of the airspace over the central industrial region near Moscow.

Weapon overview: The Pantsir-S1 is a Russian self-propelled anti-aircraft gun and missile complex based on the 8×8 truck chassis, designed for air defense of targets in close proximity, including long range air defense systems. It can also provide protection against ground or surface threats. The complex combines anti-aircraft missile and gun weapons. The main feature of the complex is its ability to quickly detect and eliminate any target: airplanes, helicopters, smart bombs, or ballistic missiles, as well as other ground and surface targets. The engagement zone of its missile component is 12 kilometers range and 8 kilometers altitude. 2 Responses to “Another Russian FLAG item: the “Pantsir-S1” Close Air-Defense System which is known to be in Ukraine”