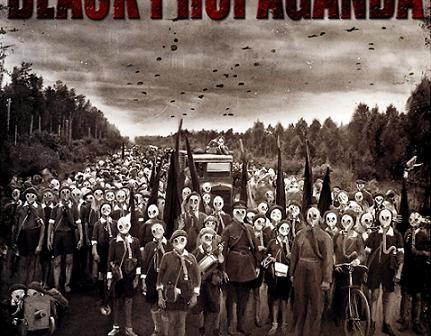 This is how they create a picture for the lying Russian television (March, 3): some clowns pretend they are drooping Ukrainian officers who leave their action stations in the Navy HQ. The other clowns play a role of a jubilant crowd that passes the “deserters” over the live passage without let or hindrance. This is all lies and a cheap spectacle. Judge for yourself: the gates of the military unit did not open, there were a lot of journalists with the professional equipment and lighting (look forward to the news with Kiselev); both the host with a megaphone and the spectators knew their roles in advance — you can see this by the accidentally slipped phrase “they are preparing”. Instead of the expected spontaneous aggression the participants of the meeting orderly moved aside and applauded. You can hear the Russian patriotic music from the speakers. The real HQ officers watched this show from the inside. Thanks to them, as well as operational work of Hromadske.TV conducting a live broadcast from the event, the deception was instantly revealed — before the spectators have a chance to see these made-to-order plots about surrender of the Ukraininan Navy on the Ruissian TV. We are very grateful to Bohdan Kutiepov, the reporter from Hromadske.TV, who courageously born the company of these “militant” actors. The officers asked to tell that the Ukrainian Navy remain true to the oath of allegiance to the Ukrainian people and will never go on about these fake militia and their foreign sponsors.