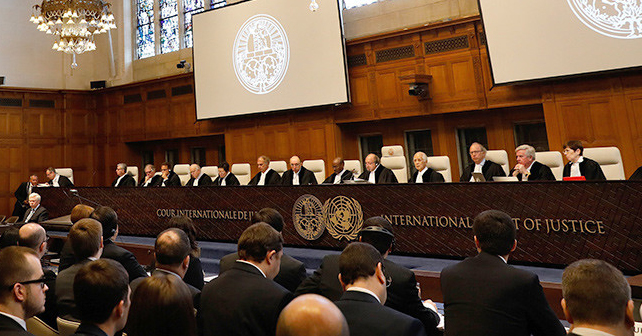 On March 7 during the hearings on Ukraine’s case against Russia in the International Court of Justice in The Hague Russian representative Ilya Rogachev stated: “The main source of weapons found by the rebels is the Soviet-era reserves that were on the territory of Ukraine. A large share of these reserves were left in the mines of Donbas, and were found by the rebels.” At the same time Rogachev refused to comment on the evidence indicating that Donbas militants use modern Russian weaponry and equipment that has never been supplied to Ukraine.

Volunteers of InformNapalm community closely followed the statements made by Russian representatives in ICJ and debunked their false statements on-the-fly during live twitter stream. Earlier InformNapalm published a report and a video presentation that detailed 30+ types of uncommon Russian weaponry spotted in the occupied areas of Donbas.

These presentations and other materials were demonstrated by Ukrainian delegation during the autumn PACE session and before the members of NATO Parliamentary Assembly.

Most of the items indicated in the report are relatively new types of military equipment that were passed into service of the Russian Army within the period of 2004-2015. This military hardware is not produced in Ukraine, most of these models have never been imported to Ukraine, and for this reason these pieces could not become a trophy of Donbas militants. It is worth noting that the latest models of military equipment require advanced maintenance and can only be operated by specially trained personnel, i.e. professional Russian Army servicemen.

InformNapalm’s database of Russian weaponry traced in Donbas keeps expanding. While in October 2016 it had 33 types of Russian military equipment, its most up-to-date version that was released in the end of January 2017 contains 41 items. Individual cases referring to Russian military hardware pieces are backed by detailed OSINT investigations with supporting photo and video evidence. This evidence suggests that the Russian Federation supplied on a regular basis and continues to supply anti-government paramilitary groups and Russian military servicemen in Donbas with latest military equipment.

Odd Russian statements in The Hague did not become a surprise for InformNapalm. Remarks about tanks that came to Donbas not from Russia, but rather appeared out of nowhere were made by Dmitry Peskov, Press Secretary of the Russian President Putin, in February 2017, and were also debunked by InformNapalm with the reference to the collected evidence.

InformNapalm community gives free access to all gathered data, translates investigations into many languages, and informs Ukrainian Embassies around the world about the most important findings. Still, this is not enough to exert strong political and diplomatic pressure on the Russian Federation. Massive media response can be much more effective with this respect, so we encourage journalists to spread the collected information and hold Russia accountable. It is time to remind Moscow it will not be able to hide behind false statements any more: The Hague Court has already opened its doors and the pay-off is coming.

Information was specially prepared for InformNapalm.org, an active link to the authors and our project is obligatory for any reprint or further use of the material.