The Battle of the Debaltsevo Bulge 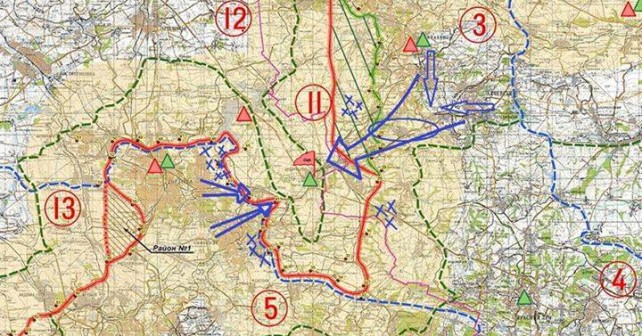 The Battle of the Debaltsevo Bulge is possibly the most fierce and wide-ranging battle of the Muscovite-Ukrainian war to date. The battle involved the full capabilities of modern mechanized forces, the interaction of intelligence, infantry, artillery and armored vehicles, artillery and means of electronic intelligence. The Ukrainian army, for the first time in its history, held a successful defensive operation on a broad front showing itself to be fully capable in battle. After 8 days of fighting Ukrainian troops successfully repelled the Muscovite assault. The Muscovite army of mercenaries had attempted to destroy the Ukrainian defense in the Donbas and dramatically change the course of the war. The enemy was unable to achieve this goal and suffered heavy, possibly crippling losses.

Debaltsevo is a highway and railway crossroad point in the middle of the occupied territory in Eastern Ukraine. Ukrainian forces had taken this city shortly after the tragic shoot down of flight MH17 by a Muscovite Surface to Air Missile. In fact, that Buk-M1 missile battery had travelled on a flatbed transporter through Debaltsevo on its way to Donetsk and then a location near Snizhne from where the fatal missile launch occurred. It was shortly after this that Ukrainian forces took Debaltsevo. When on July 28, they took the high ground of Saur Mohyla near the border with Muscovy they had actually cut the occupied territory in half, isolating the city of Donetsk. It took an invasion by a full Division-equivalent of regular Muscovite troops on Ukraine’s Independence Day (August 24) to ensure the survival of Putin’s planned aggression. The Debaltsevo Bulge is the remnant of the corridor that this Muscovite invasion crushed.

Debaltsevo is also of strategic importance as a potential launching point for the taking of Horlivka and eventually Donetsk itself. In the meantime it served as the base for the OSCE observer team that included, ironically enough, Muscovite General Alexandr Vyaznikov, the officer that had assembled the Muscovite “Peacekeeping” Force that was occupying this part of Ukraine, and would take part in the battle.

What happened in the Battle of the Debaltsevo Bulge?

The Muscovite command concentrated two strike groups on the flanks of the pocket and attempted to pinch off the Debaltsevo bulge at its neck. The nucleus of the so-called Horlivka Group on the West was the so called 3rd Brigade, the Oplot Brigade and the “Kalmius” Brigade. The nucleus of the so-called Brjankovska Group on the East was the 4th Brigade known as “Batman”. Also involved in the battles were the main forces of the “Prizrak” (Ghost) brigade, the best fighting unit of the “LNR” and DNR.

In fierce fighting on 23-24 January the enemy managed to seize the villages of Troitskoye and Svetlodarsk, posing a threat to the M-103 highway. Obviously, the goal was to completely surround the Debaltsevo group and take the road. However, the Ukrainian command was prepared for such enemy actions. A timely counterattack by Ukrainian armour allowed the Ukrainians to drive the enemy from Troitskoye and establish a reliable foothold there. Simultaneously the enemy was ejected from Svetlodarsk. In fact the enemy was repulsed along the entire line of defense – including Chernukhin, Redkodub, and Nikishin. The battle was waged from the very outset with unprecedented ferocity. The attack by the Muscovite mercenaries had been preceded by a powerful artillery barrage, including the use of heavy howitzers.

It should be noted that the efforts of the Muscovite special services to recruit mercenaries with combat experience, led to the formation in these occupied territories of what were in fact private armies. But the dramatically increased combat effectiveness and coherence of these mercenary bands, and the conversion of them into real military units – was the result of transferring a large number of Muscovy’s regular troops into Eastern Ukraine (the so-called “vacationers”). Thus the shock troops of the Muscovite command were mostly mercenaries with combat experience, and the proportion of Muscovites in such professional units, especially armour and artillery, reached 80-90% of the total personnel.

The key factor in repelling these attacks was the effective action of Ukrainian artillery. Their effective fire on enemy troop concentrations ensured the stability of the Ukrainian lines of defense. Artillery ammunition was being supplied around the clock. Artillery shelling on this scale was being employed by the Ukrainian army for the first time since the war began. This, clearly, was a surprise to the enemy.
The failure of their first attack did not cause the Muscovite command to abandon their goal of taking control of the road. The enemy was flexible, and tried to maintain the combat capability of their fighting formations. Faced with organized resistance, the enemy moved back and worked over the Ukrainian positions with artillery fire of their own while pulling back from Troitskoye and Svetlodarsk.

The Muscovite brigade of mercenaries regrouped and went on the attack again. Reassessing the strength of resistance in the neck of the Debaltsevo pocket the enemy struck south of Troitskoye and Svetlodarsk.

Their main forces were concentrated on the battlefield’s eastern perimeter. The enemy attempted to capture the ridge heights that control M103 between Troitskoye and Debaltsevo. The enemy occupied the village of Sanzharovka, and fierce fighting took place on ridge “307.9”, as well as in the settlement of Krasniy Pakhar.

Simultaneous with the changed direction of the attack along the eastern end of the bulge the enemy made a similar maneuver on the west end of the battlefield of the bulge. Not having sufficient armoured reserves, the Ukrainian command could not control the entire perimeter of their defense.

On January 29 they were attacked by a large force at Uhlehorsk, and this assault proved successful for the enemy. As a result of the diversion of Ukrainian forces to repulse attacks by Muscovite troops in other sectors, that town was defended by a small unit of Ukrainian soldiers from the 13th Chernihov Battalion (formerly a battalion of Self-defence) and the Ivano-Frankivsk Special Forces “Svityaz”. During the defense of the checkpoint at the entrance to Uglegorsk the Chernihov lads proved quite competent. Three Muscovite tanks were blown up by mines, but the fourth burst over the Ukrainian positions, crushing their trenches. However it was immediately destroyed by rocket-propelled grenades along with its crew. This was in fact later confirmed by a Muscovite video report.

The superior enemy forces were eventually able to capture this first checkpoint and most of the town. However, the checkpoint on the outskirts of the city held firm. The small garrison in the city began to act as spotters adjusting artillery fire on the advancing enemy. As a result the Horlivka group was unable to build on their early success.

Incidentally, the Ukrainian “Svityaz” company, contrary to many earlier reports, was not surrounded in Uhlehorsk. They remained undetected for two days on the northern outskirts of the city, and after checking for a safe escape route the soldiers retreated in good military order.

A Ukrainian counterattack was immediately organized deploying reserve units of the National Guard who, supported by Army tank units, successfully attacked the enemy on the eastern outskirts of Uhlehorsk. Ukrainian commanders need to act quickly. Having lost control of the town, it was necessary to counterattack to contain the enemy, otherwise the Horlivka group would be an unpredictable threat. Soldiers of the Kulchytskyy National Guard battalion and the tanks attacked immediately. It was a very important and timely decision. In addition the commander of the 25th mechanized infantry battalion “Kievan Rus”, on hearing the news of a breakthrough at Uhlehorsk also gathered his own battle group for a counterattack.

These attacks allowed the Ukrainian command to regroup and contain any possible assault through Uhlehorsk onto Debaltsevo, which is just 14 kilometers away. The eastern outskirts of the town became the main battlefield. But Ukrainian reconnaissance units even attacked the enemy in the town’s center. Ukrainian tanks engaged in stubborn battles with enemy tanks that were trying to advance out of Uhlehorsk onto Debaltsevo. The speed and determination of the counterattacks by Ukrainian units stopped the Muscovite advance.

On January 29 after a massive artillery barrage the enemy again struck at the Ukrainian defense perimeter. There were attacks on all positions along on the eastern side of the Debaltsevo bulge. After causing much damage by heavy artillery shelling on the fortifications of the enemy, Ukrainian units withdrew from Nikishin. The fighting in this village had lasted four months and was particularly fierce. The decision to withdraw was justified, as Ukrainian troops moved to occupy previously prepared rear positions.

By 2 February the intensity of the fighting had fallen off sharply. The enemy offensive on the Debaltsevo pocket had failed. For the first time, the Muscovite command recognized the immensity of their losses, and suspended their offensive.

3 Responses to “The Battle of the Debaltsevo Bulge”