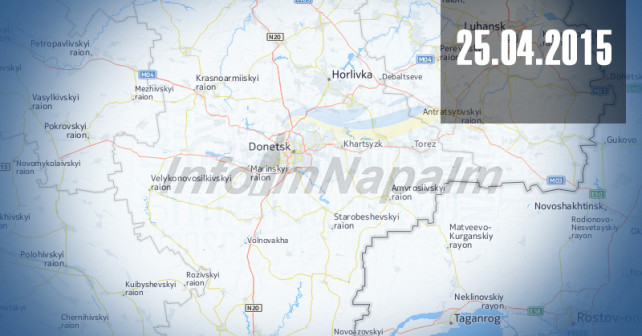 *unedited version of the article

Chronicle is prepared by InformNapalm team using information from our insiders on the occupied territories, as well as news from open sources.

Donetsk: Inhabitants heard shelling of MRLS in the night of 25.04, the sound of incomplete package shot was audible from Kalininskyi district.

At 08-35 Kyiv district – laud salvo fire of heavy artillery from the area near Donetsk airport (DAP) and several shots from Avdiivka direction.

After 10-00 pretty intense shelling from Donetsk started according to the inhabitants of Leninskyi district, Tekstil, from the side of the Toy factory. In the same time shooting was audible near DAP.

10-22 from Shchetinin street – shot of missilery and roar of heavy artillery.

From 10-00 to 14-00 the inhabitants described the sounds of shooting from heavy gunnery in Donetsk in different districts:  Proletarskyi district (interval 15-30 seconds), Kalininskyi district (salvo fire near DAP), Avtodrom of Azotnyi (paired salvo fire on long distance, the sound of landing was not audible), Kuibyshevskyi district, from Balka, Smolyanka and from the side of Khimzavod.

At 14-30 three self-proppelled artillery systems 2C9 “Nona” escorted by green jeep were driving from Azotnyi via Olimpieva street to the provincial hospital ( OTsKB). 14-35 on Illyich avenue shot tank was towed towards Makiivka.

After 16-40 heavy shots, mixed with rounds of automatic gunfire, renewed from the side of Smolyanka in Balka.

Also in Donetsk yesterday car accident happened on the cross of Ilyicha and Shakhtostroitelya streets, where militants and local inhabitants were involved.

After 19-00 militants started to shell from self-propelled howitzers (SAU) and tanks from Spartak (2 units); from DAP to Tochmash  (2 units) and Ukrsplav to DMPZ (1 unit). Inhabitants informed about combat near DAP with SAU and howitzers, also about intensive light weapons shooting.

Ringleader of DNR militants A. Zakharchenko yesterday made a statement to the German journal “Der Spiegel”, that DNR returned heavy weaponry on the previous positions and now the number of his militants is over 23 000 men, plus ca. 60 000 in reserve. Also he underlined, that DNR wants to occupy the whole territory of Donetsk oblast.

Interesting, that closer to the evening Zakharchenko has made one more claim, where he refused from aforementioned and accused the journalists of “Der Spiegel” in wrong interpretation of his words. The sense of his accusations was: he did not state that this happened, just speculated about probability.

After 20-00 the sounds of large caliber machine guns and tanks shots were to hear on the Yasynuvata check post of road police (DAI).

The intensity of the traffic of militants equipment somewhat decreased, from the whole traffic one could notice the movement of several convoys.

Inhabitants mentioned that this week the drills on the firing range of militants practically have been finished, but northern and north-western parts of the city are still restless.

Local militants got no salary, although their money was promised before Easter. This causes indignation in militant ranks and the discipline goes down. The cases were observed, when the militants were trying to sell cheap their personal uniforms parts because of lack on money for the cigarettes. Militants spread rumors that salary delays are caused by truce and they will get paid after active combat starts; therefore they want to fight by any means.

Approximately after 18-00 in Horlivka in the district 6/7 active combat started with use of mortars and light weapons. The inhabitants notice that in the area Mayorsk – 6/7 serious fights took place. After 19-40 the inhabitants of central city districts have heard the outgoing shots of militants heavy weaponry.

The inhabitants describe the situation as following: “They shoot severely from the area of Besarabka towards Kurdyumivka!  Mostly they shoot Kyrdyumivka block-post and Maiorsk, it also got a lot!”, ”In Horlivka the inhabitants hide in the basements: it is first time such a powerful open violation of “armistice”.

It is worth to mention, that cellular connection is down in this quadrant; in the morning in Luhansk and in neighbor area MTS stopped to work, in the evening Life also was down. In Lysychansk one of Internet providers does not work because of cut by militants cable on the uncontrolled territory.

We obtain the information about the thievery by the militants the summerhouses in the village Zhovte during last days; their belonging is transported away on the trucks.

Morning started at 09-00 with roar of tanks convoy (ca. 13 units) near Romashka. They went to Gagarina street and turned towards Borysivka. Around 14-00 the convoy returned part by part: first three tanks returned, after some time seven more, then three more, one of them was towed.

Today in Stakhanov the children concert from the art school took place. The inhabitants were surprised by the participation of Cossacks, who brought and showed the documentary, glorifying Don Cossacks army. Later somebody Zhelvakov had a long speech, thanking Cossacks for the rescue from “junta” and cheering the breadwinners. The inhabitants were perplexed and displeased with such interruption of children festival.

At 10-45 the inhabitants noticed the shots of heavy artillery towards Stanytsia Luhanska ans Shchastya. At 14-02 a significant smoke was observed near the oil depot.

It was noticed that even two weeks ago it was many of the Russian special operation forces in the town. Now they left and many other servicemen arrived, which buy all appliances and clothes in mass. Also, the movement of heavy equipment was observed towards Shchastya.

Retirement money was delivered to some Luhansk inhabitants, which is quite remarkable event. This money was paid with rubles printed in 1997.

At 09-00 the call center of linear department on the Popasna railway station  received a call from the workers about the explosion under shunt locomotive at 7-20 on the uncontrolled by Ukraine territory. Two railroad workers were injured. This happened during the movement of two shunt locomotives, one of them run off the track.

Around 12-00  a convoy of trucks on the exit from the “custom” of LNR militants was observed. As the witness reported, 46 trucks with Ukrainian plates crossed the border and went to RF. Apparently these trucks bring food and consumer goods from RF for the trade in LNR.

Another remarkable case on the Izvaryne  border point – the Russian custom servicemen treated brutally and tear into pieces a passport of one individual because of the stamp LNR. On the Russian checkpoint those documents are considered invalid.

Last night the militants shelled these settlements from MRLS “Grad”. According to the inhabitants, remote explosions of “Grad” cassettes were audible even in Volnovakha. “Grad” was shelling from the side of Telmanove (people from the village Karan’ saw that). “Grad” destroyed four houses, luckily with no people inside.

Since 06-25 the shelling started from heavy artillery, presumably cannons D-30 of 122-mm caliber, possibly also SAU. Shell from SAU exploded 5 meters away from the Ukrainian soldiers, all untouched.

Reinforcement from the Russian Federation is arrived. All of them are criminals, whom the early release was promised if they would fight in Ukraine as least 6 months. Those criminals were not amnestied yet, they were promised just an early release, so called UDO. According to the inhabitants, this is not the first time, such approach used to be practiced since long time ago.

The conclusions remain unchanged: militants constantly break the peace agreements and prepare to the new assaults.