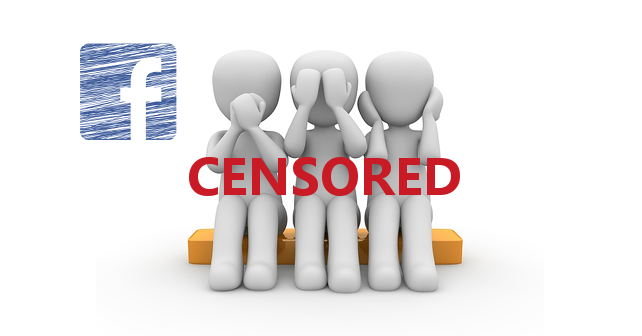 Facebook violates freedom of speech by selectively muting media voices. While Russian bot farms continue enjoying too much of a freedom, journalists, bloggers, and opinion leaders who criticize the Kremlin get blocked by Facebook admins for no reason.

The Chief Editor of InformNapalm Roman Burko was blocked by Facebook Administration for 3 days for the post that he made in August 2015. Essentially, Facebook accuses Roman of using hate speech and, thus, violation of Facebook Community Standards. While this may look fair to you at the first glance, this is not, because, in reality, Roman’s post was quite the opposite. In fact, in this post, he was revealing the cases of inter-ethnic conflicts and human rights violations of Ukrainian refugees in Russia. He was bringing the issue of persecution of Ukrainian minority to light.

This is an English translation of his post (originally made in Russian) with the link to the article on InformNapalm.org website attached:

Russians take their frustration out on refugees from Ukraine. Ethnic conflicts aimed at refugees from Ukraine are becoming common in Russia. Russians, frustrated by the crisis and sanctions, blame these problems on ethnic Ukrainians and take this frustration out on those who just recently were running from the war in a hope for peaceful life. Despite the fact that Russian Federal Migration Service constantly inflates the number of refugees from Ukraine, quite many people [from the war-torn part of Ukraine] believed Russian propaganda and in order to escape the war moved to Russia, hoping for “brotherly love” on the part of Russians. It appeared, however, that no one was anxious to see them there, rather, on the contrary, they are mostly perceived as the root of the problem. Obviously, in this situation, one can expect to see not only inter-ethnic squabbles but also ethnic riots against Ukrainians. https://informnapalm.org/11933-zlo-russia-bezhency/” 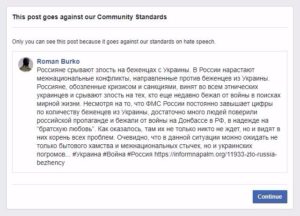 Frankly, our community does not know what to do now, after Facebook turned to blocking people for regular journalism. Not only this is a clear violation of the freedom of speech, but this is taking the shape of obstruction of media.

For quite some time InformNapalm has been writing about the issue of selective blocking on Facebook (e.g. here) and about, what we believe, is a targeted campaign of the Russian government-backed bot farms seeking to silence InformNapalm. Our journalist investigators have been jumping from one Facebook ban to another for months. It got to the point when we spend more time being blocked than being not blocked, and now we see this outright shame in dealing with Roman Burko’s post.

Our community is a thorn in Putin’s flesh, for we devoted 4 years to revealing Russian war crimes to the world. Now we are being punished for the mere fact that we were strong enough to say “No!” to the Russian aggression in Ukraine, Georgia, Syria, and other countries. We were brave enough to investigate the cases, to search for evidence, to shine the light on atrocities, to voice the names loudly, and to continue looking for justice no matter what. All of us are volunteers, we are not paid for that, the only wish we have is to hold Russian state accountable for the grief that it brought to people in different countries: for the killed, wounded, missing, repressed and desperate, for people that were forced out of their homes and those who live in fear.

If Facebook thinks that what we do is a violation of some sort of standards, then we don’t know where these policies will take all of us. To the world where everyone will pretend like there are no wars, no racial conflicts, no crimes, no injustice – only cats, flowers and funny stories? To the utopia where we will hold a spotless facade with all the rot hidden? Are we going to shove our true problems and turn the blind eye to the crimes? It THIS what are we looking for?

We write about the hybrid military operation to seize Crimea, Syrian chemical attacks, shelling of civilians in Donbas, the downing of MH17, repressions against Crimean Tatars, fakes and manipulations of Russian media, terrorism, and POWs. Do we have to stop this now?!

We, InformNapalm volunteers, are asking you to stand for media and for freedom of speech today. We are asking you to act. Show Facebook that this cannot continue this way. People cannot be blocked just because some government in the world is rich enough to make computer software and pay people that generate mass complaints and send them to Facebook Admins, who, in their turn, are reckless enough not to even get into details of the posts.

Please, support us in our struggle. Send your messages to Facebook Administration, write articles and posts – talk about it, do something. This is important! People are suffering and the world has the right to know about it. All of you have the right to know. Otherwise, someday we will all wake up in a fake world full of sweet nonsense on the outside, but unfair and deeply rotten on the inside.

Pass it on, if you believe in free media.