Future of Russia as Philosophical Paradigm of Putin’s Cynicism 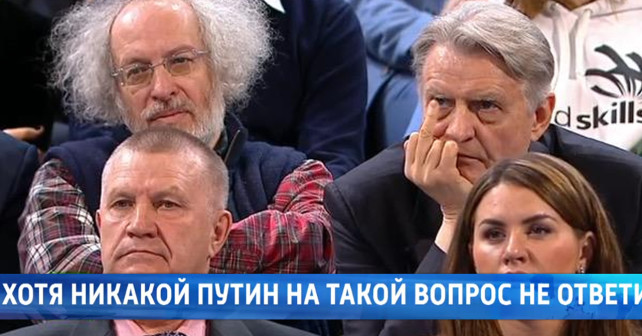 85% of Russians do not see any cynicism in Putin’s behavior.

Impressions of the live call-in show with Vladimir Putin on April 16, 2016.

I have a short break around 2 pm, so I go to a cafe to get a cup of coffee.  The TV is on, and it is showing Putin’s conversation with the people. John the farmer, a bearded American, who came to Russia in 1992, is talking. He has a farm of one thousand cows with each producing 10 thousand liters of milk per year. But he is on the verge of bankruptcy, because of the senseless tax policy and the greedy banks. He asks in Russian with an accent: “Vladimir Vladimirovich, your statistics says that everything is fine. Do you believe this? Perhaps, they are afraid to tell the truth? What kind of future can be in the country where there is no truth? ”

Putin’s answer: “How did you end up here? Cherchez la femme?”

The astonished Russian farmer John says that he does not speak French. Clearly, Putin “does”, so he graciously translates: “This means, look for the woman… Your wife is probably Russian?”

The American Russian is in shock: he has been married to a Russian woman for 23 years, but he asked Putin in front of the whole world about taxes, banks, cows, and prices, and not about wives, who, by the way, Putin does not have… The French and marital expert drops the nasty smirk and moves on to the boring to himself and incomprehensible to others explanation of Russian agriculture and pricing. But it is pointless: he has already said everything.

An American, who 25 years ago came to Russia to share the secrets of hard work, prosperity, and freedom, has received from the leader of the country the answer more appropriate for a local cop checking documents: “Why the hell are you here?” This is now the third eternal Russian question after “Who Is At Fault?” and “What Is To Be Done?”

I walk out, leaving behind my now lukewarm coffee.