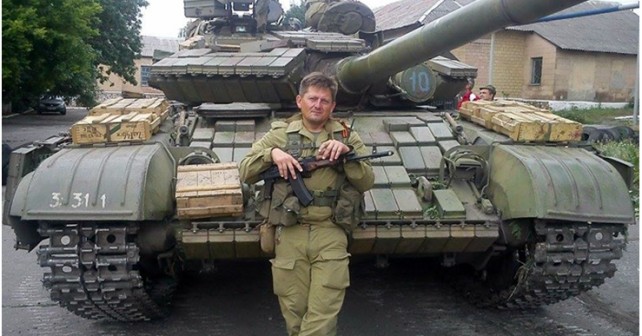 In this paper we will try to consolidate all current information on the T-64 tanks operating a variety of flags in Luhansk and Donetsk oblasts of Ukraine. We are interested primarily in the tanks serving the bandit formations rather than the machines of the Ukrainian army (it is its main fighting tank). Their showing up was pretty unexpected for all participants and observers of the events. The Russian side was in a hurry to use the surprise and labelled all T-64 tanks as trophies and items “confiscated” from the Ukrainian army. The behavior of the site Lostarmour.info is very characteristic in this regard. It divides all T-64 variants into only two categories: either Ukrainian or “militia” tanks. For Lostarmour, Russian tanks in Ukraine don’t exist. Therefore it was strange to find the link to such a very politicized Russian resource in the report on the weaponry from the ARES consulting company. More detailed about this report here: “Rising Red Flags” vol.3.)

So, the need to clear the situation with the mysterious T-64 on the occupied territories of Ukraine was pertinent for us as well. This sample became for me the first tank alleged to be “separatist weaponry”. 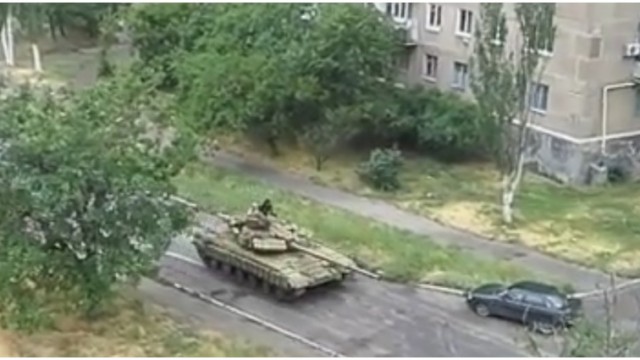 It is clear that this tank was immediately announced as “confiscated” although it had neither Ukrainian army labeling nor any traces of a fight. For example, I can show the samples of tanks captured in actuality.

As anyone can see, the appearance of a tank captured during fighting is pretty different from the “parade” appearance of the separatist’s tanks.

Now about propaganda. Is it necessary to mention how these tanks are marked in Lostarmour? For instance: 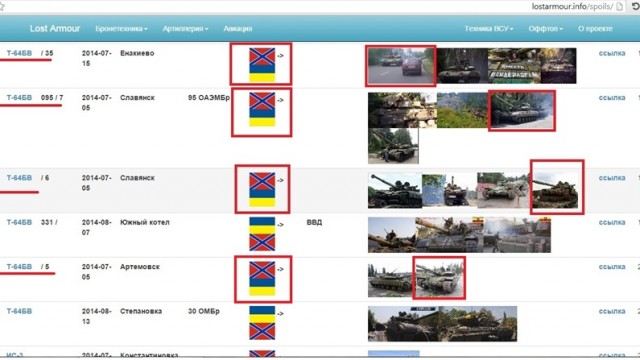 It is indicative to mention that the so called Novorussia is the first owner of this tank, as well as the tanks under the numbers 5, 7 and 35. In this way the audience gets acquainted with the idea that any suddenly-emerged territorial new growth can obtain combat army equipped with main battle tanks out of the blue. If this site also would point the source country of the tanks, the picture would become more visual and take onquite an opposite meaning. Then the statistical enlistment of destroyed and captured gear would turn from an instrument of terrorist propaganda into incontestable evidence of Russian aggression against Ukraine.

What is the problem?

The problem of the military use of Russian T-64s is the extended term of their conservation. It was difficult to find any machines among them capable of being used in a fight – therefore even tanks from Eastern Military District were put in charge. Russian authorities were ready to pay even though they should be delivered by plane. An IL-76 can carry one tank. According to information from livejournal http://sled-vzayt.livejournal.com, T-64s were transported by Il-76from Krasnoyarsk to Rostov Oblast in May 2014. What is even stranger, in October an An-124 was also brought in. It can carry 2-3 tanks at once, but aviation again was transporting tanks only one by one! On the other hand, each tank was transported in a “from the sky straight to the fight” mode. So calculate for yourself how much Russia paid for the opportunity to use it in Ukraine.And the fact that Krasnoyarsk tanks have been used in Ukraine is already proven.

Let us take the photograph of Ilya Artemyev made by him on the 2544th CBRT (Central Basis of Technical Reserve) of RF army. Although this picture is from 8 June 2014, it is quite possible that it was made sometime earlier. 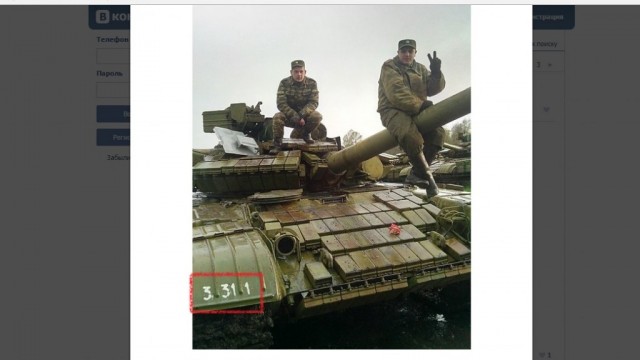 Who else wants to say that the Russian army is not participating in military actions in the east of Ukraine? 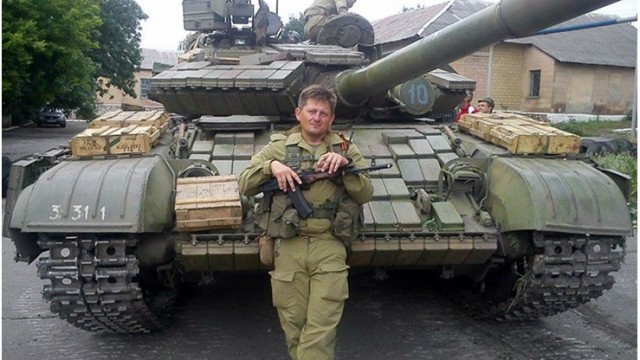 And here is a picture of another tank, also from Krasnoyarsk, but also with separatist markings and also in the ATO zone: 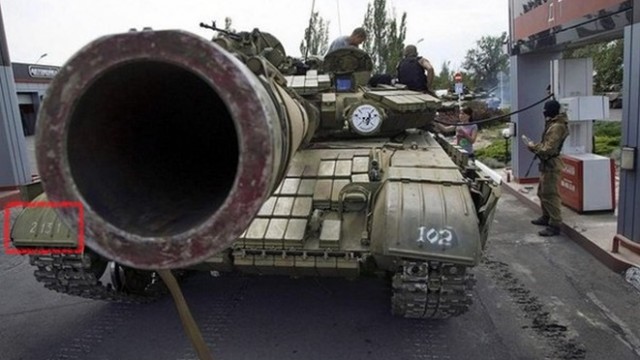 Look on the right side of the tank: “2131”. Four digit numbers are very specific for Soviet tanks; therefore the possibility of error is almost impossible.

But the storage bases of the Russian army are not only the source of supply for T-64 tanks in the ATO zone. Crimea also contributed. During the spring of 2014, the Russian army captured over 300 tanks of this type on the peninsula. 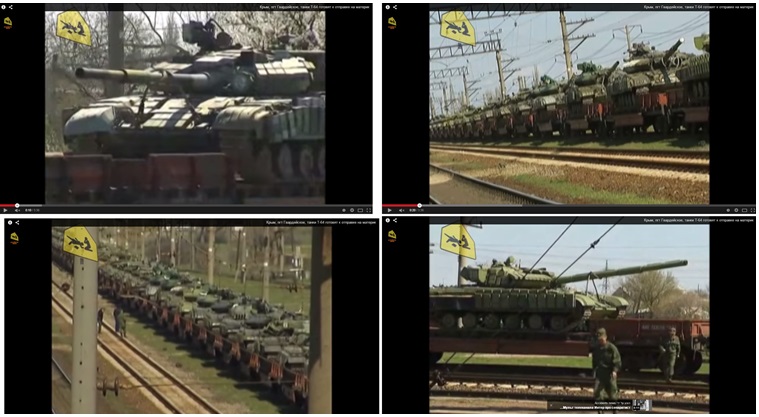 There are no doubts that the majority of these tanks are already fighting in Luhansk and Donetsk oblasts as the main weapon of Russian aggression.

Let us look at the tanks according to their serial numbers.

One very simple fact for the beginning. There are only two countries around the globe that have tanks of this model and are able to deliver them to the ATO zone: Ukraine (it uses these tanks mainly) and Russia (it has over 2000 tanks of this model in storage, though they are not officially enlisted). At first glance, even the absence of Ukrainian identification marks like standard tactical numbers and white strips might seem to be enough to determine that Russia is the real source of the illegal tanks. But there are also other, more solid proofs.

Tanks T-64 # 6, 7 and 8 were identified during their transportation across the Russian Federation as part of a military convoy on RF Ministry of Defense transports. 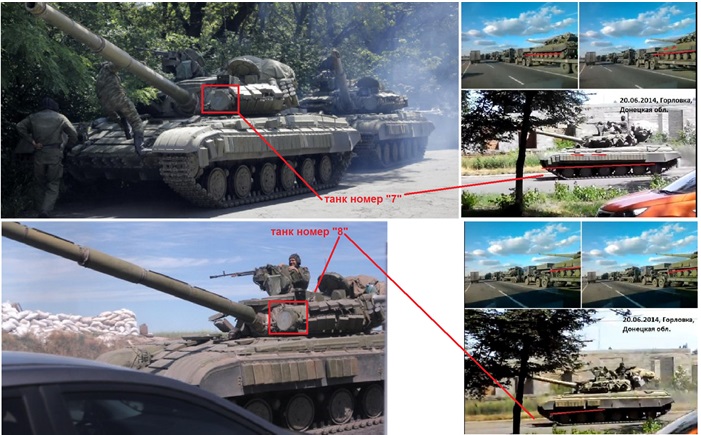 The very unusual mounting (vertical) of the dynamic armor blocks on the rubber screens makes the identification process very accurate. These two also belong to the same group of tanks of the Russian invasion forces:

Thus, all the tanks of bandit formations fighting in the Donbas with  vertically mounted dynamic armor blocks on the sides of the bodies are Russian tanks. But that’s not all.

Tank T-64 under board number 7 already has a separatist’s identification number on the lid of the infrared projector while being transported on a trailer travelling through Russian territory(!). Thus, once again, on the basis of photographic and video material, a very simple fact is proved: the distribution of numbers, and hence the distribution of tanks to DNR / LNR terrorist groups occurs in Russia. This means that the general management of the “Novorussia” project is carried out from Russia.

Specifically, for the whole group of T-64 tanks with blue numbers, it is possible to conclude: they unambiguously belong to the Russian Federation.

It falls to the “Legion of St. Isztvan” nationalist group from… Hungary?! To understand how far Russia is targeting, I just say that these “brothers” want the Trans Carpathian region of Ukraine. 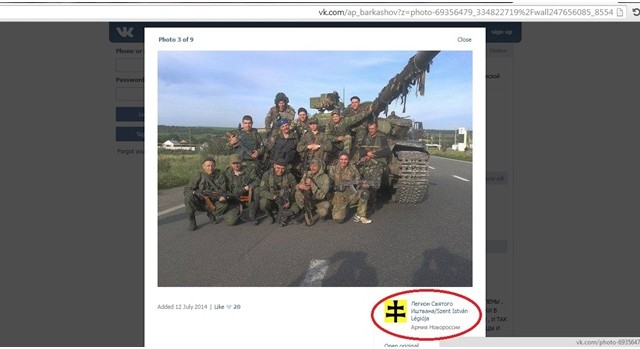 The participation of Hungarian Nazis in military actions in Ukraine is very symptomatic. Magyars were fighting once here, although with a different partner as part of Army Group South – not against fascism but for the victory of Nazi Germany. Therefore it was astonishing to see Hungarian nationalists (possibly the descendants of those first fighters) in the ranks of Russian “fighters against fascism”.  It is also unclear what Bezler (Bes) was doing there, but the blue cap in the middle of the picture belongs apparently to him. Russia is only country able to gather all these people.
The fate of this tank is unknown.

Tanks # 2, 3, 4 did not get in frame and possibly never will because of losses and damages.

It is possible that these numbers were never inserted, which is also not unusual for Russian gear in Ukraine. I would like to emphasize this fact for the reader’s attention: tanks without labelling that participate  in fights on the separatists’ side are also Russian. Army regulations in the Russian (and Soviet) army do not require the application of Russian symbols on military gear. Although T-64 tanks with blue numbers 2, 3 and 4 did not get in the picture, their loss is confirmed by the introduction of backups. T-72s with corresponding numbers appeared in the Mariupol direction at the end of summer, as well as # 5, which became a trophy of the Armed Forces of Ukraine. 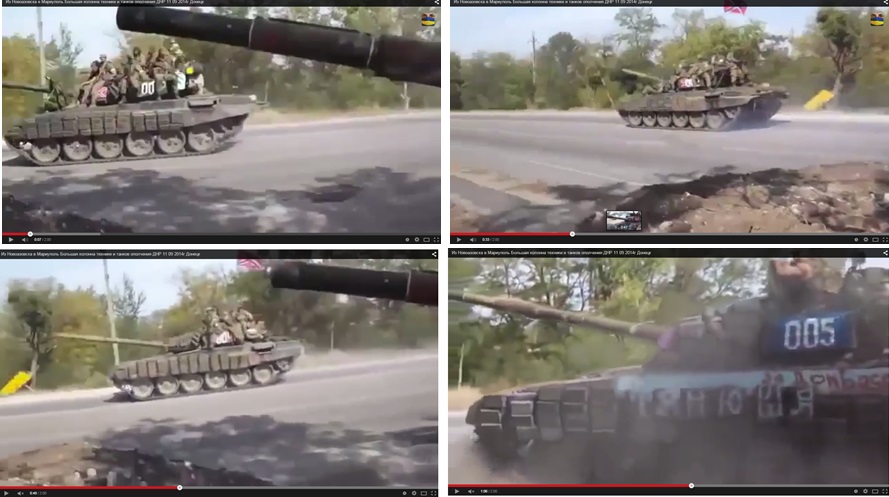 This is another important moment, indicating the centralized supply from Russian territory. Dropout (destroyed or captured) numbers are assigned to the next tanks. They might be T-72, as well as T-64.

These tanks did not participate in the battles, but did end up captured and demonstrated to the whole world during the exhibition of trophy weaponry in Kyiv.

But tank # 7 is even in running condition: 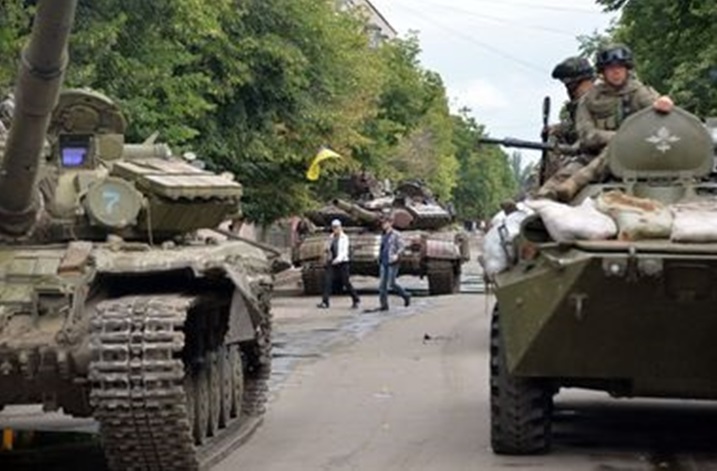 However, Russian military disposition could not do well without a lucky “seven”. And so, a white “7” in the picture. 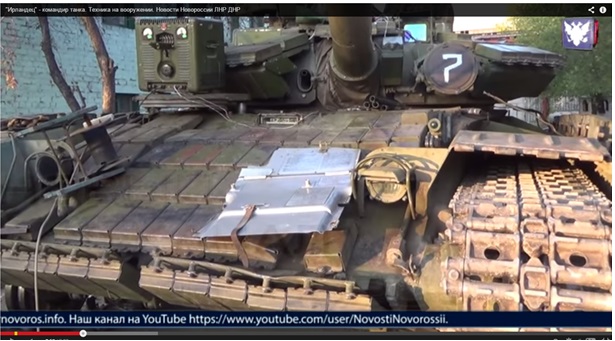 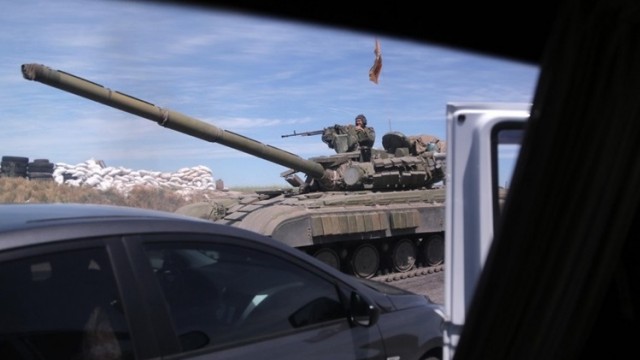 Apparently it was destroyed. Russia sent a T-72B in exchange, as it supposed to be: 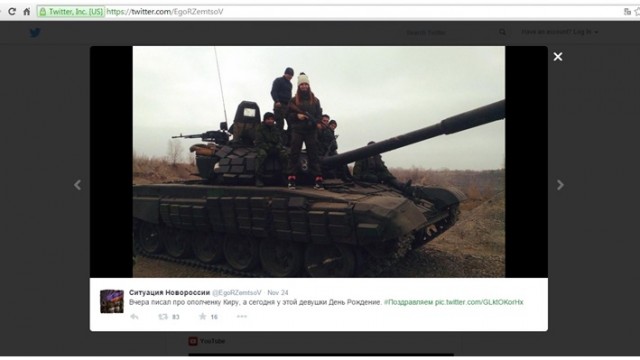 It is unknown what happened to blue # 9. But Russia has found a substitute, too: 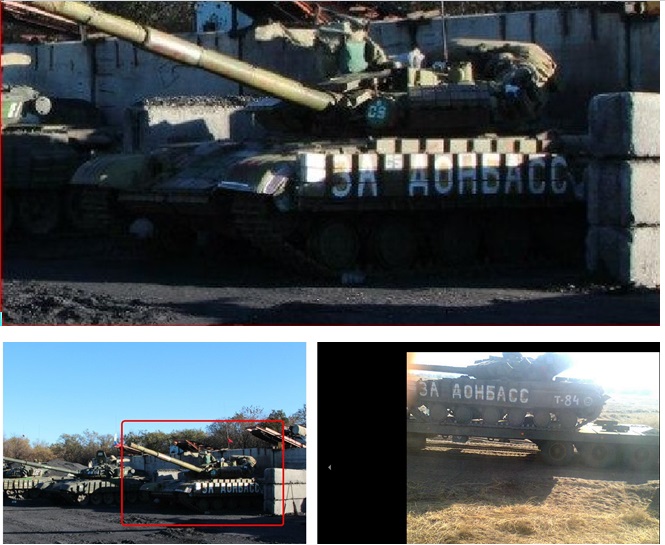 “I was preparing myself to the roaring of 600-horsepowered engines, clatter of tracks, creaking running gear, to anything… And here almost like the birds are singing! Aleksey Kotov, whom I was following to the repair bays, explained: it is storage base for armored vehicles here, not any frontier-zone unit on alert status. The latter have such noises in excess. The main functions of the Kozuli base are maintaining the battle readiness of reserve equipment and on-the-fly compliance with the orders of General Headquarters. In case of war, this unit is to prepare and send the needed number of tanks and other armored vehicles to where the senior officer will indicate within a strictly indicated period. Railways come up to concrete ramps of equipment bays. From here tanks, already filled with fuel, oil and lubricants, with new batteries, load themselves on the open train platforms and go from here anywhere. So, nobody canceled combat duty here.” (http://www.yarsk.ru/press/?i=100000091).

The study of the first ten separatist T-64 tanks leaves no doubts that there are not only separatists in the ATO zone, but rather the Russian army. The adventurism of the “Russian world”, codenamed “Novorussia”, is carried on the Russian citizens’ public dime. They pay for it not only with the fall of the ruble’s exchange value but also with empty shop shelves. The Russian government also will be responsible for the destruction of a neighboring country and the killing of Ukrainian citizens to the fullest extent of international law.

(с) This material was prepared by the videomonitoring specialist Al Gri exclusively for informnapalm.org. The active reference to the source is required when using this information.

One Response to “Guide to Russian T-64 tanks in Donbas: Part 1”