History of Ukraine: The Princes and the Kozaks 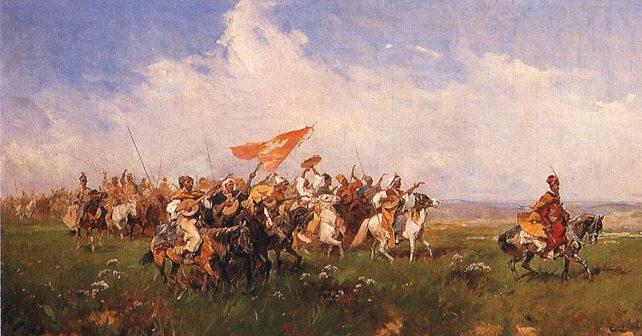 Some trivia about Ukraine on the 29th anniversary of country’s Independence by George V.Pinchuk. The Princes and the Kozaks, Part 2. In this feature, we are using the term “Kozak”, the transliteration of the original Ukrainian word, to distinguish the Zaporizhian, Sloboda and other Ukrainian hosts. Russian hosts from Don, Terek etc are called “Cossacks”.

In the 15th-16th centuries, most of what is now Ukraine belonged to the Polish-Lithuanian commonwealth (“The Republic”), but the life of the people depended to a very large extent on their local feudal lords, the Knyazi (“Princes”). Most of these lords were related to the house of Gedimin, spoke a language close to modern Belarusian and Ukrainian, and were Eastern Orthodox Christians. Yet, beginning from ~1569 (the year of the so-called Lublin Unia), these princes also swore allegiance to the Polish king, and were his vassals and courtiers. They corresponded in Latin, Polish, or their native “Old Ukrainian / Old Belarusian” Slavic language. Among them, perhaps the mightiest ruler was Prince Konstayntyn Vasyl Ostrozky. He was nicknamed “the un-crowned King of Rus,” and was, actually, offered the Polish crown several times, but refused because the kings of Poland were, traditionally, Catholics – and Prince Ostrozky wanted to remain Orthodox. He is famous for printing the first Gospels in his native language, and founding the Academy of Ostroh, a university that functions to this day.

In 1596, the so-called Brest Unia was signed, officially starting the Eastern Rite Catholic Church in Ukraine (a.k.a. the Greek Catholic Church). It was meant to reconcile the Orthodox Ukrainians with Rome, which was, of course, a step in the direction of more peace and prosperity. Unfortunately, at the beginning of the next, 17th, century, the secular powers began to close the traditional Orthodox parishes by force, which, of course, caused huge tensions and sparks of violence.

Also, during the 16th century, many thousands of men, mostly young, robust, and adventure-seeking guys from all over Ukraine, traveled to the lower Dnipro river, where the enormous rapids prevented the movement of battleships up from the Black Sea. These Kozaks warriors wanted to defend the Orthodox Christian Ukrainian lands from the attacks of the Ottoman Turks. They founded their own city and fortress, called Sich, on the island of Khortytsya in the middle of the Dnipro river. There, they gathered in summertime, trained, and raided the steppes, fighting the Turkish and the Tatar troops from the Crimea. They also built ships and made sea raids on Istanbul and on Crimean seaports, freeing Christian captives whom the Turks and the Tatars enslaved. In winter, the Kozaks dispersed and lived close to the Dnipro banks as independent owners of their hamlets. At the beginning of the 17th century, the Kozaks became a formidable military force and a kind of a self-governing state with their own elected leaders and laws.

In the 16th and the early 17th century the Kozak’s leaders (Hetmans) were loyal to the Polish crown and participated in the wars of the Great Duchy of Lithuania and the kingdom of Poland against Muscovy. Hetman Petro Konashevych Sahaydachny (1582-1622) nearly took Moscow in 1618. He also was an outstanding mecenate who donated to Orthodox monasteries and schools, of which the so-called Bratska Shkola (“Brotherhood School”) later grew into a huge and famous institution of higher learning, the Kyiv Mohyla Academy, which now functions as a top-ranking Ukrainian liberal arts university.

In 1648, a Kozak leader called Zinoviy Bohdan Khmelnytsky (Polish transliteration, Chmielnicki) started a war on the Polish crown. Initially, it was his own personal vendetta on a Polish landlord who stole his land, but very soon it grew into a colossal uprising of the Kozaks and Ukrainian peasants against their Polish landlords. The people fought (the way they knew how) against the feudal oppression, as well as against forced Catholicization and Polonization of Ukraine. Unfortunately, it turned into a fratricide. The main adversary of Khmelnytsky was Prince Yarema (Jeremiah) Korybut-Vyshnevetsky, a Rusyn-Ukrainian, a noble valiant knight and a great statesman who, nonetheless, kept his allegiance to the Polish king (whom he personally hated, but could not break his knight’s oath of loyalty). Both sides resorted to unspeakable cruelties. Most tragically, Khmelnysky, a brave warrior as he was, turned out to be a horribly short-sighted politician. In January 1654, he essentially surrendered Ukraine to Muscovy, approving what he thought was a temporary military union against the Republic but turned out to be the beginning of the “Russian” (actually Muscovite) occupation of Ukraine.

By 1659, the two outstanding sons of Ukraine, a Kozak general Ivan Vyhovsky and an eccentric scholar-nobleman Yuriy Nemyrych conceived what became known as the Unia of Hadyach. It was a unique document, which, essentially, argued in favor of the Polish-Lithuanian Commonwealth transforming into the commonwealth of Poland, Lithuania, and Ukraine. Vyhovsky and Nemyrych proposed to establish a Great Principality of Ukraine on par with the Kingdom of Poland and the Great Duchy of Lithuania. And it was a unique historical moment, because in July 1659 the Ukrainian troops won a huge battle against the Muscovite army near the city of Konotop, totally crushing the Muscovites and proving that Ukraine did not need the “friendship” of the tyrannic Tzars. If the Hadyach Unia were approved by the Sejm of the Republic, Ukraine would perhaps remain a European country and would progressively move toward full independence. Again, tragically, it did not happen. Nemyrych was killed at a duel, and Vyhovsky forced to resign by populists who hated him because of his aristocratic blood and his alleged (rather than actual) love of things Polish. Without these two luminaries, the Sejm did not even bother to convene for discussions on the Hadyach Unia, making it into a useless piece of paper. It was later “adopted,” but in such a distorted version that it excluded its main point, the creation of the Ukrainian state.

By the end of the 17th century, the newly forming Russian Empire under Tzar Peter I established its reign over the Ukrainian lands to the east of the Dnipro river, ceding the western part of Ukraine to the Republic (which, in turn, evolved more and more into the Polish monarchy rather than the Polish-Lithuanian Commonwealth of the old days). In 1702, a great son of Ukraine, a giant of military strategy, diplomacy, and statesmanship, Ivan Mazepa, being the Kozak leader of the eastern part of Ukraine, suppressed the uprising of Paliy on the other (Western) side of the Dnipro and added huge parts of the country to his control. It was a big step toward the unification and freedom of Ukraine. Moreover, in 1709 Mazepa joined his forces with the Swedish king Charles XII against Tzar Peter, hoping to rid his dear mother Ukraine from slavery in the captivity of the Tzars. And again… tragically, Mazepa managed to gather less manpower than he hoped to gather, because the populist agitators slandered him in their massive propaganda campaign (no doubt, directed from Muscovy), portraying him in the eyes of the Ukrainian Kozaks as a rich aristocrat who cares nothing about the “simple people,” a clandestine Catholic (or Protestant), and overall “not really Ukrainian.” (This tragedy will repeat itself in 1918 and in 2019.) Mazepa’s loyalists were defeated together with the Swedes, and Ukraine lost her historical chance for yet another time.

History of Ukraine: The Beginnings

(for illustration used a reproduction of “Powitanie stepu”, oil painting by Jzef Brandt, 1878-79)

No Responses to “History of Ukraine: The Princes and the Kozaks”