Ukraine on the pages of Neue Zürcher Zeitung. Analysis of Swiss press archives of 18th and 19th centuries 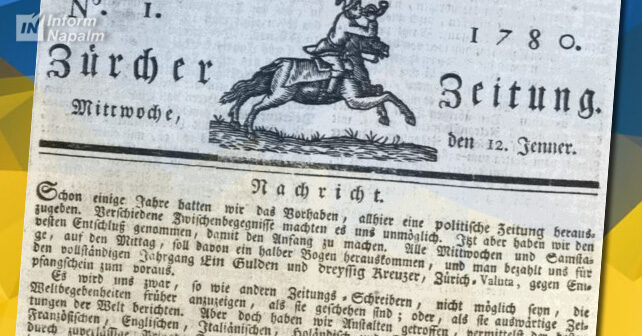 Anton Pavlushko, a journalist and analyst of InformNapalm international intelligence community, volunteer and OSINT investigator of Ukrainian origin from Germany, prepared for our readers an interesting analysis of the digitized archives of a top Swiss newspaper Neue Zürcher Zeitung. Anton became interested in the mentions of Ukraine in this newspaper starting from 1780. This material may become a source of inspiration not only for Ukrainian historians, but also for everyone interested in the history of Europe in the 18th and 19th centuries.

In January 2020, one of the leading Swiss newspapers Neue Zürcher Zeitung (NZZ) celebrated its 240th anniversary. As part of the celebration, the newspaper decided to hand over its archives to the Swiss National Library and the Zurich Central Library. By the end of 2021, it is planned to make the whole archive publicly available online. Notably, all the issues make 1.9 million pages of text (visit Neue Zürcher Zeitung newspaper here ; read the article on opening the archive; visit the archive here).

The newspaper was initially published twice a week, in 1821 it was issued three times a week, and in 1843 it became a daily. Later, the flow of news grew so much that it started publishing twice a day in 1869, and even three times in 1894! In 1974, NZZ became daily again and ever since, it has been coming out once a day.

In recent years, the newspaper has been actively developing the online format and has played a leading role in the media market in Switzerland and Germany. NZZ today is the oldest newspaper in Switzerland and one of the leading media not only in this country, but also throughout the German-speaking world.

The first issue was printed on January 12, 1780. What was the world like in those days? There was still the American War of Independence between the United States and Great Britain, which controlled half of the planet. Napoleon Bonaparte was just 11 and only six years later he was to begin serving in the royal French army of Louis XVI. Germany as a country did not yet exist, and the Holy Roman Empire lived in its final years on that territory instead. Sweden was still an empire, although it was already losing importance on the world stage.

But let’s be transported to Ukraine. In 1775 the Zaporizhian Sich was finally destroyed. The last hetman of the Zaporizhian Kozak Host, Kirill Razumovsky, was still alive, and the last Koshovyi Otaman, Petro Kalnyshevsky, was to live next 23 long years in exile in Solovki. The Russian empire was gradually absorbing Ukraine.

At the first stage, the newspaper was digitized up to 1914, which makes about 260 thousand pages of text. All materials are in the public domain. So let’s search the archive by the word “Ukraine”. From 1780 to 1914, Ukraine was mentioned 218 times. Most often – in the first decade of the newspaper’s existence, from 1780 to 1789 (68 times). In the next years, the interest to Ukraine alternately decreases and increases.

The least it was mentioned in the last decade preceding the World War I (1900-1909) – only four times. Interestingly, one of the publications is the news from Austria-Hungary from February 22, 1906 about the start of the Ukrainische Rundschau magazine. The deputy of the Reichstag, the knight Wassil Ritter von Jaworski planned to publish it; in fact, he was the Galician lawyer Vikentiy Yavorsky.

This new magazine was to continue the line of the Ruthenische Revue newspaper, but instead of Ruthenia, Yavorsky wanted to advertise “Ukraine” and “Ukrainians” in Western Europe to remind about his homeland and its real name – Ukraine, not the Russian term “Malorossiya”, or “Little Russia”. Interestingly, the latter term is rarely used in NZZ – only 48 times, a third of which falls on the same turbulent decade before the World War I. 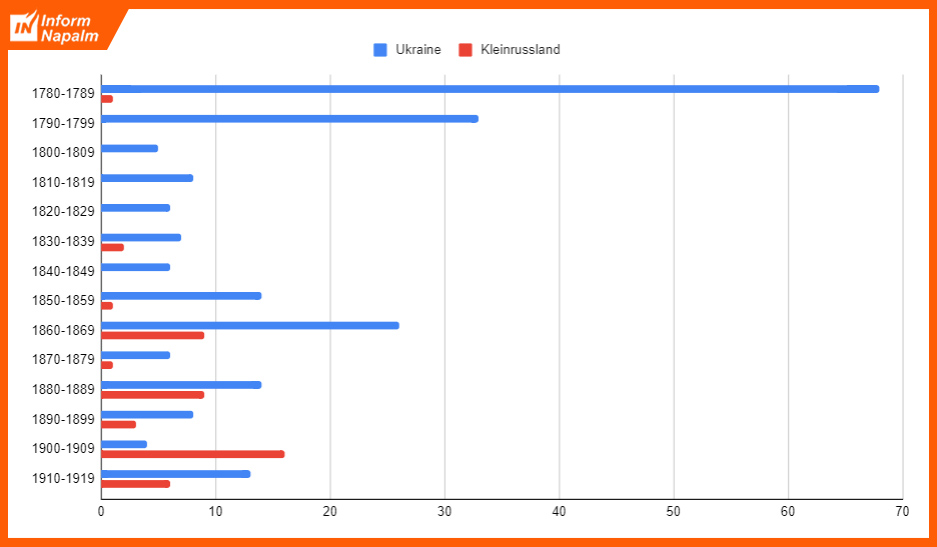 But what was Ukraine like for the Swiss in those years? In the fifth issue of the NZZ, dated January 18, 1786, the authors mention Ukraine in an article about Poland and add a remark for readers: “Ukraine is a country located on the border of Russia, Poland, Tartaria Minor and Turkey. It is divided between Poland and Russia” (see the article here). 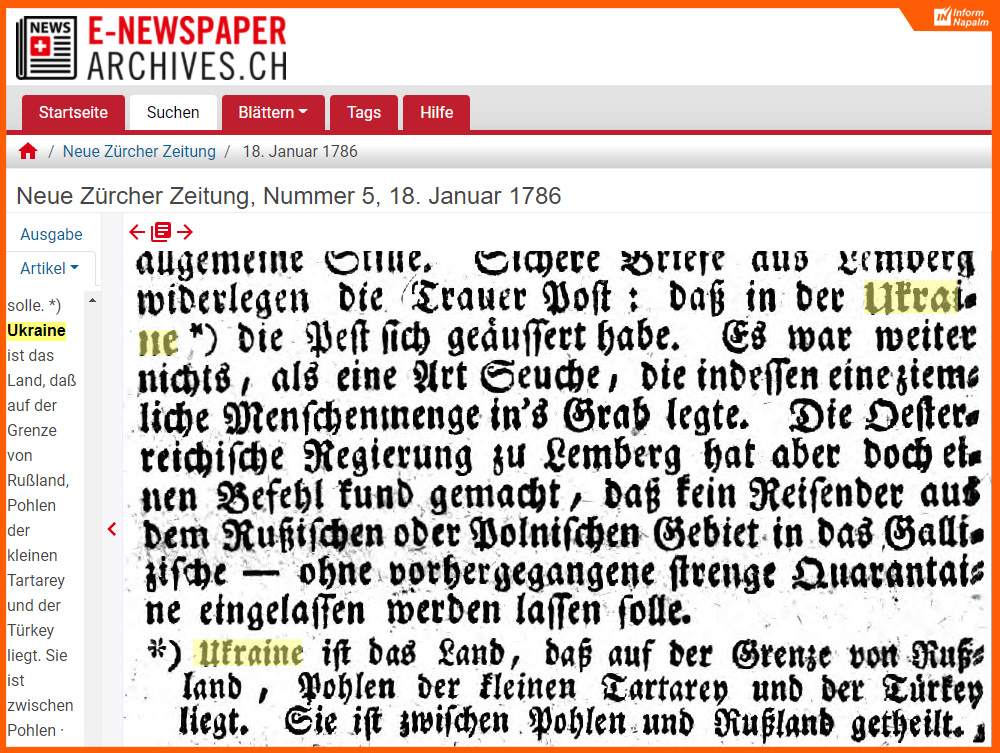 For the first time, NZZ writes about Ukraine in the first year of its existence, in issue No. 46 from June 17, 1780. We read news from Poland about the Lithuanian prince Karol Radziwill and his retinue being attacked on their way back from a hunt – the prince was wounded in the arm. Then come reports about plans to create an educational institution under the auspices of the Russian tsars with the help of Jesuits from France.

“Letters from Galicia” inform us that Field Marshal Count Romantsov accompanies the monarch, who plans to spend several days in Kyiv (Kiow), where he is going to visit underground burial caves.

NZZ writes: “They say that His Majesty liked the whole road to Kiow; as well as Ukraine itself as one of the most beautiful and fertile provinces.”

It is curious that the Swiss write the name of Kyiv in their own way – “Kiow”. This spelling is most actively used in the first decade of the newspaper’s existence (1780-1789) – in total 28 references out of 39. This is not the Polish “Kijow”, and not yet the Russian “Kiew”. Occasionally the names “Kijew” or “Kijow” are used in NZZ. 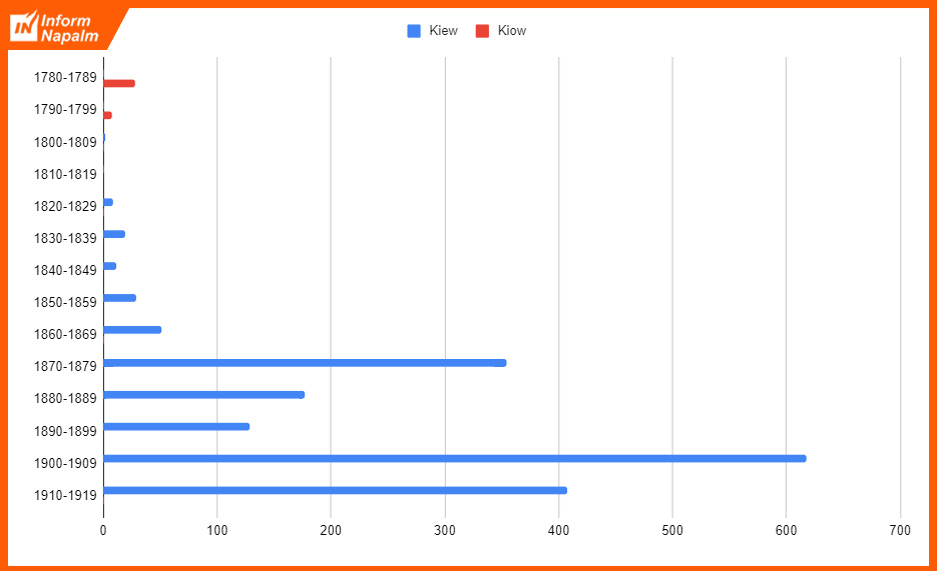 Kyiv has been actively mentioned since the second half of the 19th century. First, the city gets into the weather forecasts along with other large European cities (it is interesting that the weather was then predicted not in Celsius degrees, but in the barometric reading). But gradually the weather heading in NZZ was redesigned, and Kyiv started to be mentioned more often as well, because something always happened there.

Often, Ukraine or Ukrainians are mentioned in passing, in the news about other events: Mikhail Mikeshin (artist and sculptor, author of the monument to Bohdan Khmelnitsky in Kyiv) dies, and the newspaper writes that Mikeshin’s last work were illustrations for the seminal Kobzar by Taras Shevchenko (issue # 44 dated 13.02.1896).

Kobzar was mentioned for the first time back in 1880 in an article about literary novelties, without the name of the author. They say that readers can get acquainted with Russian literature, however “Little Russians are almost as rich in lyrical songs and folk epic as the Great Russians. Antonovych and Dragomanov created a very good collection of epic works (Kyiv 1874/75)” (№164 of 12.06.1880).

In the article dedicated to the 100th jubilee of Nikolai Gogol (No. 90 of 03/31/1909), readers are reminded of his Ukrainian origin and that the writer’s grandfather was “one of the warlike Kozaks of the Zaporizhian Host” (see the article about Gogol here). 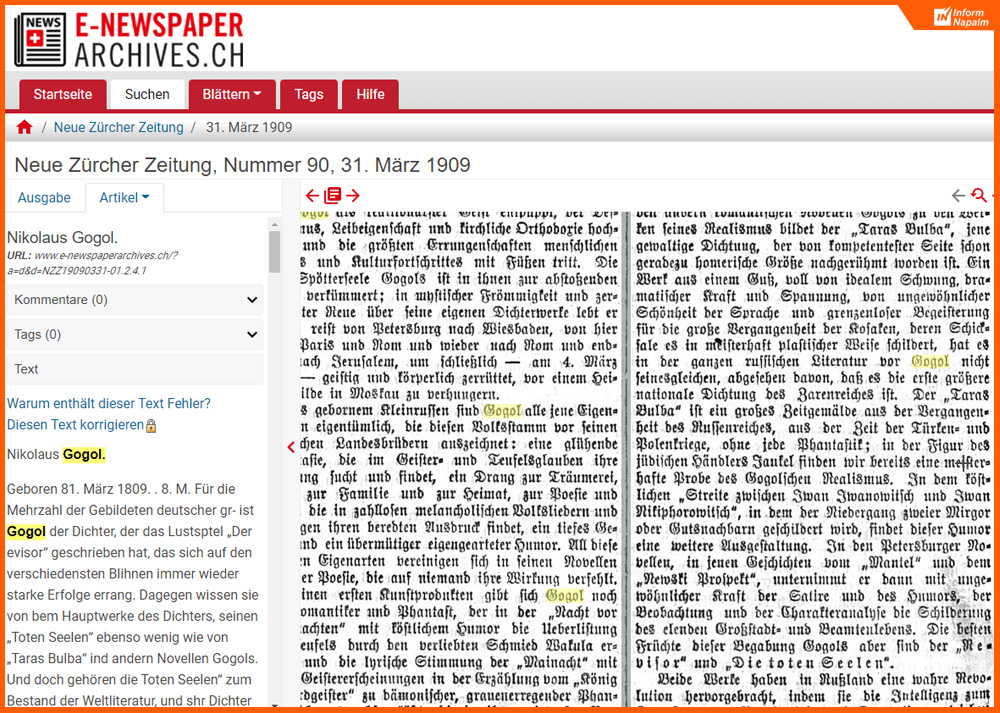 Or, for example, the article from No. 350 dated 12/18/1901, entitled “The Misfortune of the Ruthenian People” (Das Elend des ruthenischen Volkes), actually retells the history of Ukraine and the Kozaks, Hetmans, Khmelnitsky, the Orthodox faith and the “Little Russians”… But at the same time, the name “Ukraine” is never mentioned (see the article here).

At the same time, publications about Poland often mention Ruthenia – especially in the last decades before the outbreak of the World War I. On the one hand, the newspaper writes about the constant problems in the Polish-“Ruthenian” relations. On the other hand, it is mentioned that some of the “Ruthenians” live in the Russian Empire. NZZ published several analytical articles about this in a row. The question of independence of the Ukrainians-Ruthenians seems to be in the air in Switzerland.

Ukrainian cities in the NZZ

Now let’s focus on the Ukrainian cities that are most often mentioned on the pages of NZZ (the number of mentions is indicated next to the names of the cities):

It is interesting that Simferopol (42) and Sevastopol (44) are mentioned with approximately the same frequency, while the Swiss write about the Crimean Yalta (147) much more often. Moreover, they use two different spellings: “Jalta” (59) and “Yalta” (88).

Ternopil / Tarnopol often got into weather forecasts (76). However, the mythical Russian term “Novorossiya” (Neurussland, 18 mentions) did not catch on in the newspaper at all, even then almost unknown port of Mariupol / Mariupol was mentioned more often (20 times).

The open digitized archives of the NZZ present interesting material for Ukrainian historians that can become another source of knowledge about Ukraine. So far, the NZZ archive has been digitized up to 1914. In fact, there is still the entire twentieth century ahead for those who are eager to research the Ukrainian history through the NZZ publications. And for all the German speakers, this archive is a wonderful material for studying the history of Western Europe in the 18th and19th centuries.

By Anton Pavlushko specially for InformNapalm. Translated by Julia Ponomarenko, edited by Artem Velichko. Distribution and reprint with active link to the source is welcome!

No Responses to “Ukraine on the pages of Neue Zürcher Zeitung. Analysis of Swiss press archives of 18th and 19th centuries”