Homeless officers: vanishing hopes for housing of the Russian servicemen The practices in the Russian army dedicated to staff support for officers and veterans do not have the good substance claimed by the Kremlin propaganda.  Hundreds of staff officers, currently or formerly in service, have been betrayed and risk losing their housing. The situation also effects many candidates for service in the new 150th Motorized Rifle Division deployed in Ukraine. Let’s take a look at several recent examples demonstrating the treatment by Russian authorities given to officers who committed many years of service to their homeland.

On June 18, an online petition has been posted, addressed to the Russian President and Minister of Defense, in which residents of the dormitory for military families located in the city of Rostov (32 Oganov St.) discuss the plan, initiated by authorities at Ministry of Defense, to withdraw housing from the current and former service members and their families, in order to transfer the land for commercial real estate development. The initiative group behind  the petition reportedly brought up the issue to the hotline of the President Putin, yet no response was returned. At this time, the residence is providing accommodation for 39 families, including veterans of combat operations and officers retired from military service. The building was disconnected from municipal electric grid, thus forcing residents to switch to the power station of the nearby garden and cottage community (source, archive).

In Ekaterinburg, the toll of betrayal is effecting former service members of the Internal Troops at the Ministry of Internal Affairs. Construction of the residential complex ‘Scherbakova 20’ was frozen 2 years ago; as result, individual investors have undertaken series of one-person protests near the residence of the Russian Presidential envoy in the Ural Federal District.  The protesters demand for a solution to finish the project and change the legal action against the developer to a more serious grade. Participating investors deem solutions proposed by authorities as unfavorable, since the scheme to join in the housing association would cause transfer of legal rights from protection of federal jurisdiction and create additional costs.

One of the protesters, a reserve colonel, Chernov, who served in Chechnya during 2003 – 2008, earlier came to media attention for his one-person protests dressed in uniform with a poster signed ‘Homeless combat veteran for 3.6 million rubles (source, archive). 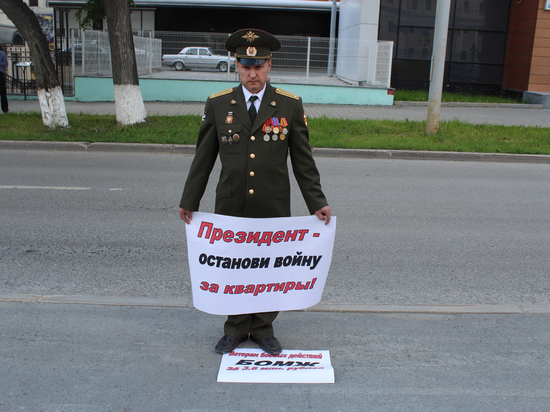 In this context, some Russian media issued information about possible extension of service duration from 20 to 25 years for personnel of the military, defense and law enforcement agencies. According to authors of the draft law, such measures would create annual savings of several hundred billion rubles.

This case study may be further completed with some observations gathered by the InformNapalm community. Based on information obtained, unfulfilled promises have become a regular experience for  the current and former servicemen, as well as candidates for the Russian military service. There is ongoing active recruitment campaign for officers and contract personnel in the new 150th Motorized Rifle Division of the Southern Military District, oriented toward the south-western direction, deployed in several cities of Rostov region. In order to produce a favorable troops staffing report, a range of creative tools is applied, drawing an appealing offer for enrollment in the division, such as good remuneration, housing, social support package and others. The reality of situation is quite different from conditions described at the military offices. For instance, the salary provided to contract servicemen turns out to be lower than promised, at 25,000 rubles; housing for soldiers on extended term is not provided, they have to share accommodation with regular conscript soldiers in module barracks, often incomplete, or tents. For officers with families and contract based servicemen, reimbursement of rental costs is not provided, unless special off-the-books transactions are arranged. It is not surprising that the 150th Division experiences high level of staff turnover. Most servicemen arriving on location and facing harsh reality of present conditions, seek to escape hoping for a different service place with more sustainable conditions. No Responses to “Homeless officers: vanishing hopes for housing of the Russian servicemen”