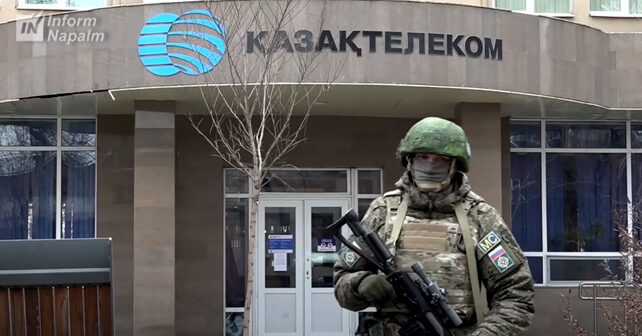 Russia is urged to withdraw troops from Kazakhstan within 10 days. But the Russian military continues to report about taking control of infrastructure facilities and telecommunications centers against the backdrop of statements in the Russian media that allegedly a “Russophobe and nationalist” has been appointed Minister of Information in Kazakhstan.

On January 11, President of Kazakhstan Kassym-Jomart Tokayev announced that the CSTO forces led by the Russian Federation will start their withdrawal from Kazakhstan on January 13 and foreign troops should leave the country within 10 days. On the same day, Spokesperson for the US State Department Ned Price said that the United States welcomes such a statement and is closely monitoring that the foreign military contingent does not violate human rights and promptly complies with the requirements of the head of Kazakhstan to leave the country.

The reaction of Russian propagandists

It seems that Tokayev’s statements came as a complete surprise to Russian propagandists. Since January 6, Russian Telegram channels have presented the actions of the CSTO and personally the decision of Vladimir Putin as a “brilliant operation” that will provide Russia with complete control over Kazakhstan. But starting January 11, publications began to appear in the Russian media about Tokayev’s unfriendly gesture towards Russia. The propagandists paid special attention to the fact that Askar Umarov was appointed Minister of Information and Social Development of Kazakhstan. Russians call him a “nationalist and Russophobe” responsible for the liquidation of Russian media in Kazakhstan in recent years. After victorious reports that have prevailed in Russian Telegram channels in recent days, beginning January 11, a new question has been increasingly heard from political analysts: “Was it worth it for Russia to save Kazakhstan?” And aggressive Russian propagandists began to circulate materials that Tokayev’s actions are “a series of demonstrative spitting at Russia” (archive).

Russian special forces under the guise of “peacekeepers“

It is still unknown how Russia will behave in this situation, whether it will fulfill the requirements of the President of Kazakhstan and curtail the CSTO forces as soon as possible, or whether it will delay the process of withdrawing troops as much as possible in order to activate the occupation plan. It is interesting that the basis of the CSTO forces deployed to Kazakhstan, according to InformNapalm international intelligence community, are units of the Airborne Forces and special forces of the Russian Federation which took an active part in the occupation of Crimea and aggression against Ukraine in the Donbas.

For its deployment, Russia has used its entire fleet of serviceable military transport aircraft. At the same time, it unintentionally disclosed to analysts and military experts all its capabilities for deploying an air assault brigade by landing method.

Interestingly, on January 12, even after Kassym-Jomart Tokayev’s statements about the withdrawal of the CSTO forces from Kazakhstan starting January 13, the Russian Defense Ministry continued to distribute new videos with footage of infrastructure facilities that they had taken under their control. These are Almaty international airport, three power plants, bakeries, city water pumping stations, three telecommunications centers Almaty-Telecom, and other facilities.

It is noteworthy that the video of the Russian Ministry of Defense from Almaty airport showed demonstration footage with Russian military equipment – Typhoon-K armored vehicle and BTR-82A which defiantly drove in front of a Turkish Airlines passenger plane. One can wonder if this segment of the video is an aggressive hint to the Turkish side from the Russians or it is just a coincidence. 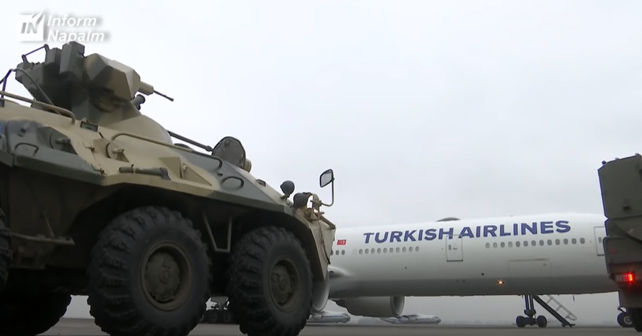 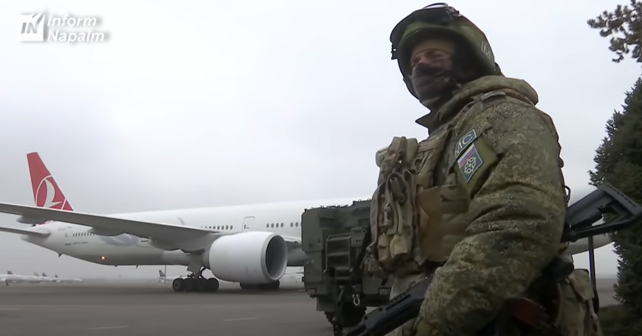 Recall that earlier InformNapalm reported that the Russia plans to deploy new Pantsir-S1 air defense systems to the Donbas to hunt the Bayraktar combat drones.

Analogies with the occupation of Crimea

Although this time the Russian “little green men” have insignia and identification marks, the video footage from Kazakhstan is reminiscent of the beginning of the occupation of Crimea when the seizure of telecommunications facilities was also a priority for Russian troops.

Analysts of the Prometheus Center in their book Crimea Behind the Curtain. Guide to the Occupied Zone  noted how the Russian operation began: “The occupation forces of the Russian Federation quickly established control over civilian facilities in Crimea: government institutions, seaports and airports, telecommunications systems, and strategic enterprises.”

Interestingly, the Russian media, just like in 2014, quickly found “nationalists and Russophobes” in the neighboring country. But whether they will announce this as a pretext for new aggression, or, taking into account the Crimean experience and subsequent sanctions, they will decide to withdraw their forces, is still an open question.

By Andrii Lisitcin specially for InformNapalm. Translated by Svitlana Kemblowski. Distribution and reprint with reference to InformNapalm is welcome! (Creative Commons — Attribution 4.0 International — CC BY 4.0)