How Many Tanks Does the August Terrorist Battalion Have? 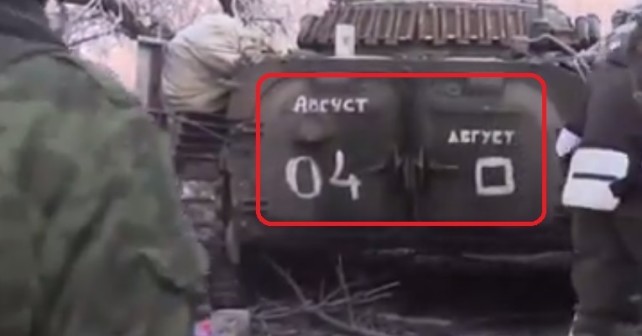 The August separate motorized battalion is a fairly new unit, and Russian propaganda is trying very hard to present it as a unit of separatist militia. Is it really the case? Let’s study the video and photo materials and make our own objective conclusion.

Our estimates of the quantity of August’s armored vehicles will be based on the fact that all its vehicles are marked with a white square. 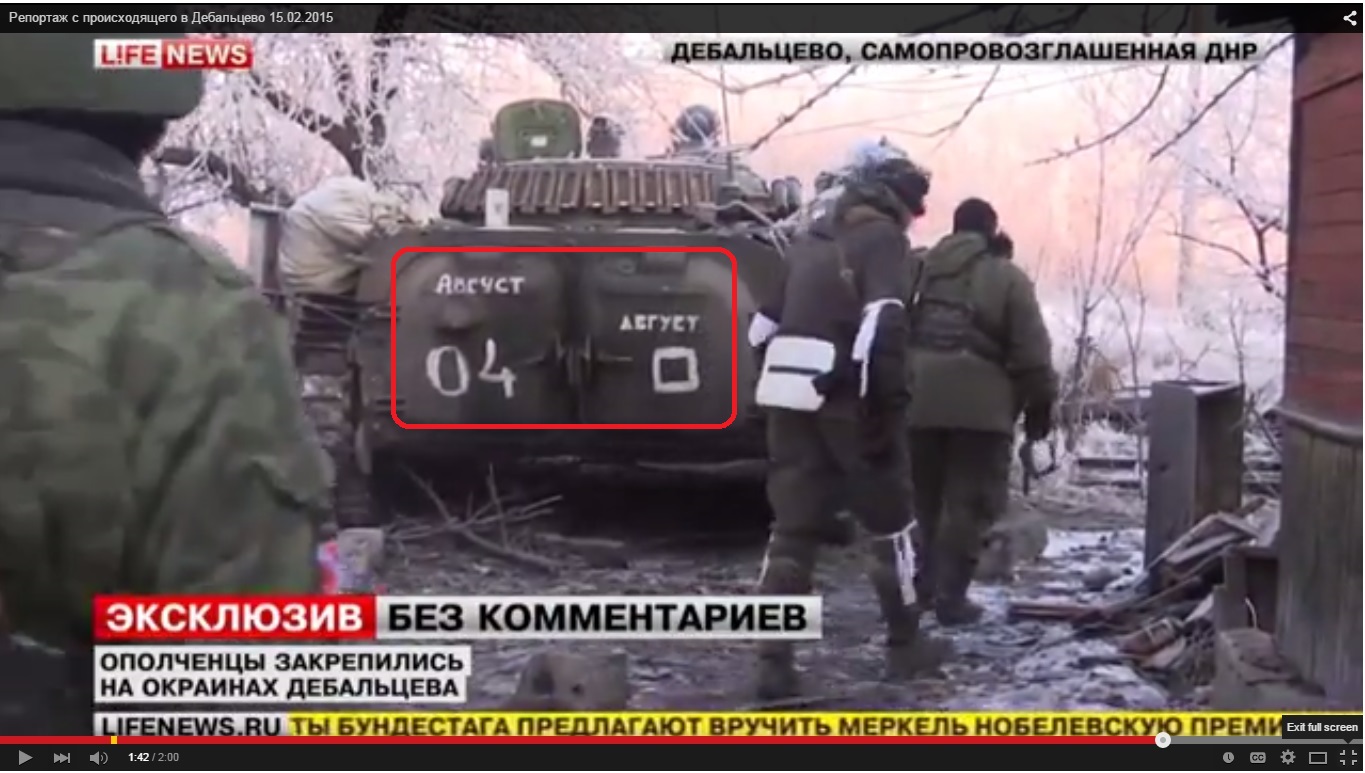 We will note right away that besides the huge number of decrepit APCs, August also has a clearly Russian-sourced BTR-80M, which was discussed in previous reports. 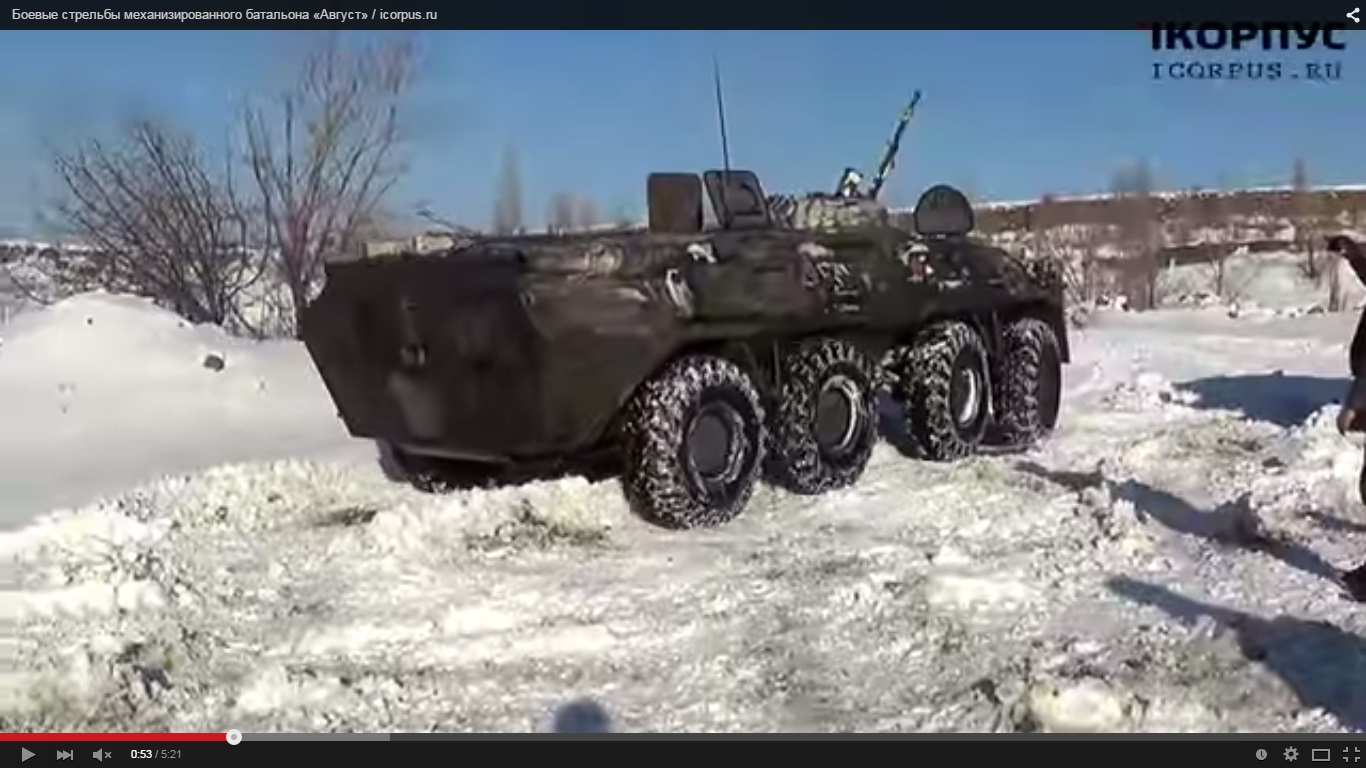 That’s why the assurances of the Russian side, voiced by Churkin at the UN meetings, that the militants’ equipment had been seized from the Armed Forces of Ukraine, need some additional confirmation. Until now, the impression has been that there had been no militants at all, only the Russian army, presented in two forms: regular military personnel and volunteers.

So, how many tanks can a self-proclaimed battalion of a non-existing state with no economy afford? If we look at the August battalion, this number should be significant. To be more precise, approximately 30-40 tanks. Sounds like too many? Let’s look at the evidence. 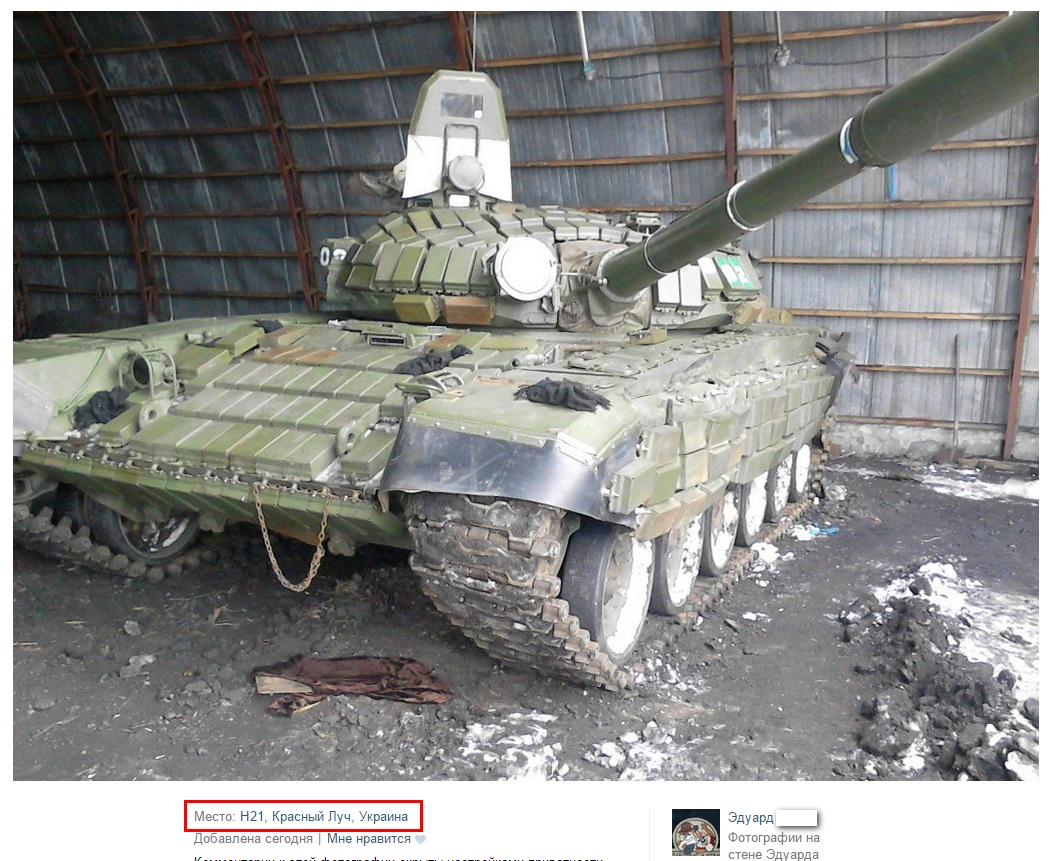 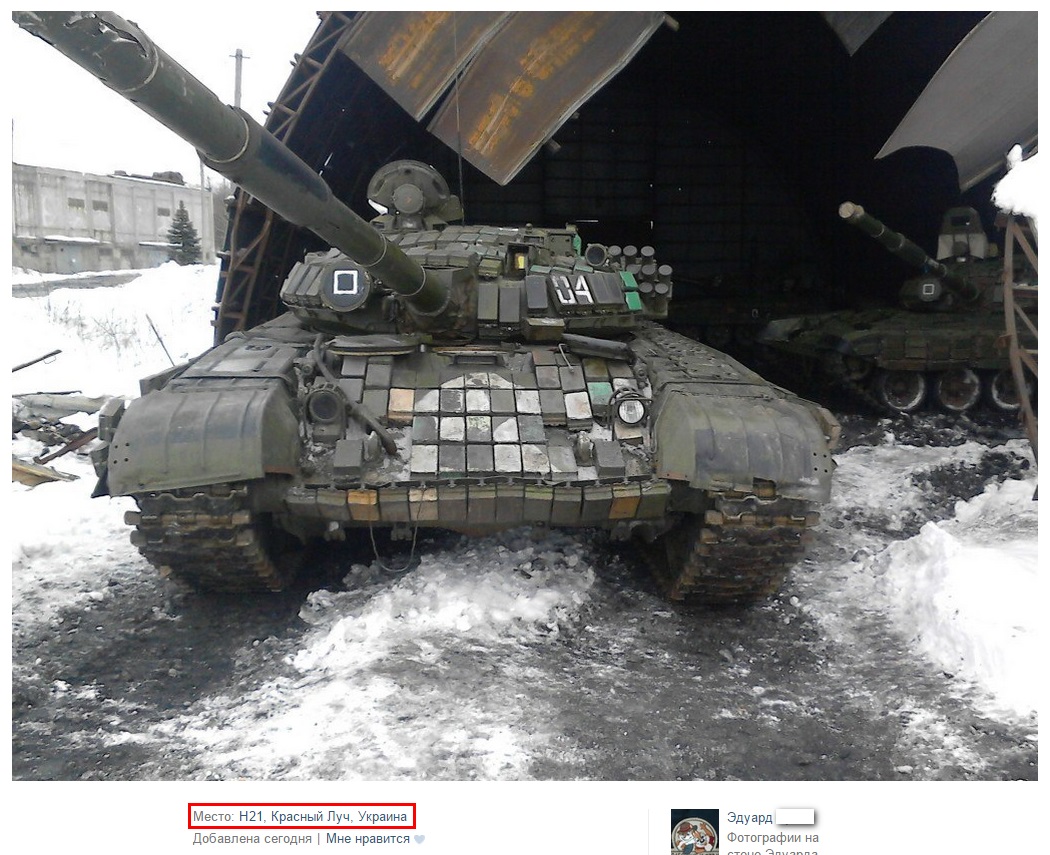 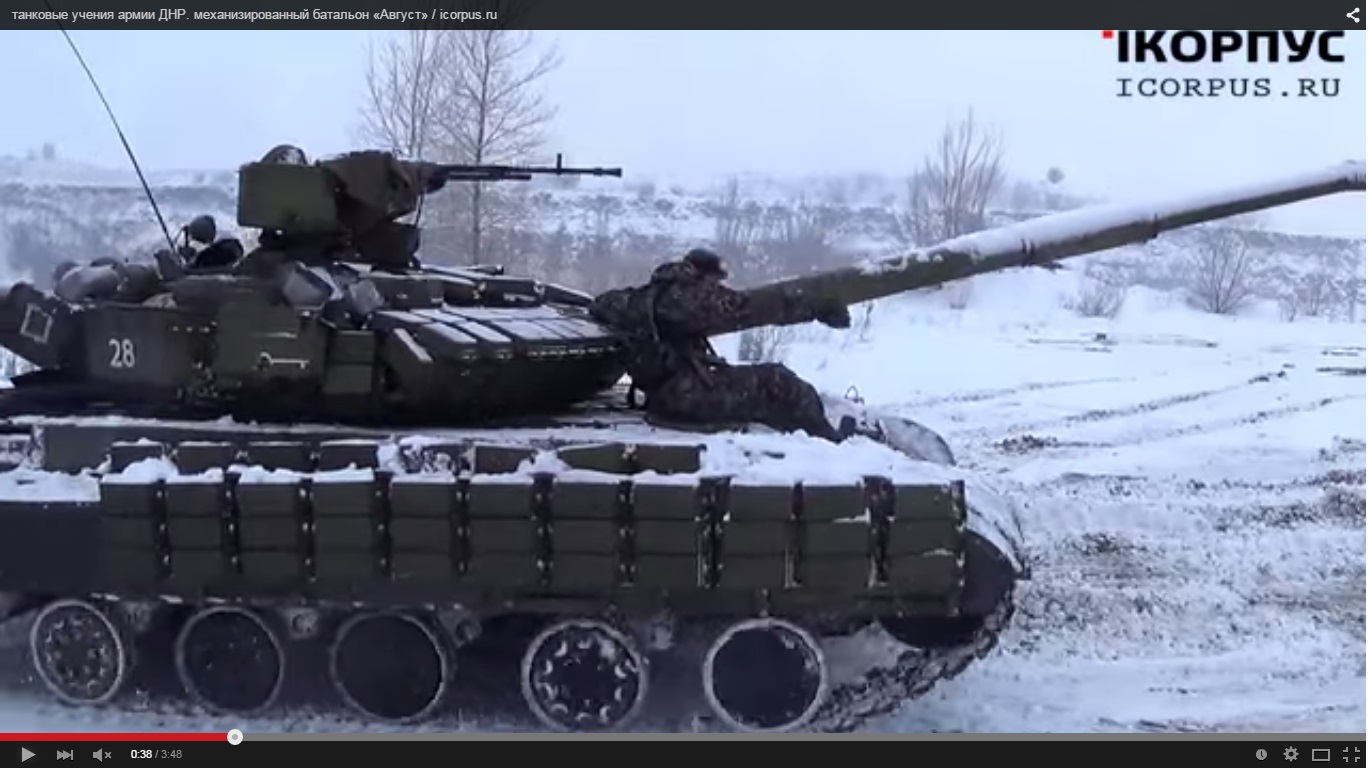 Regarding the models of the tanks, no Western army can currently afford to maintain two types of main battle tanks within a single battalion, for economic reasons. But this is the norm for Russia and the so-called “Novorossia”. Because there is no economy that cannot be used by Kremlin against its own people. And it’s worth noting that August’s T-64 tanks, which in principle could be of Ukrainian origin, in fact bear the transportation clearance markings typical for Russian tanks: N-1200 and N-0200.

T-72B tanks alone can already serve as evidence of Russian presence, and together with earlier presented details they can outweigh any lie. Lithuanian or Ukrainian tanks can not have the commander cupola of the new type and white strips on the rollers, but these features can be present on Russian tanks. 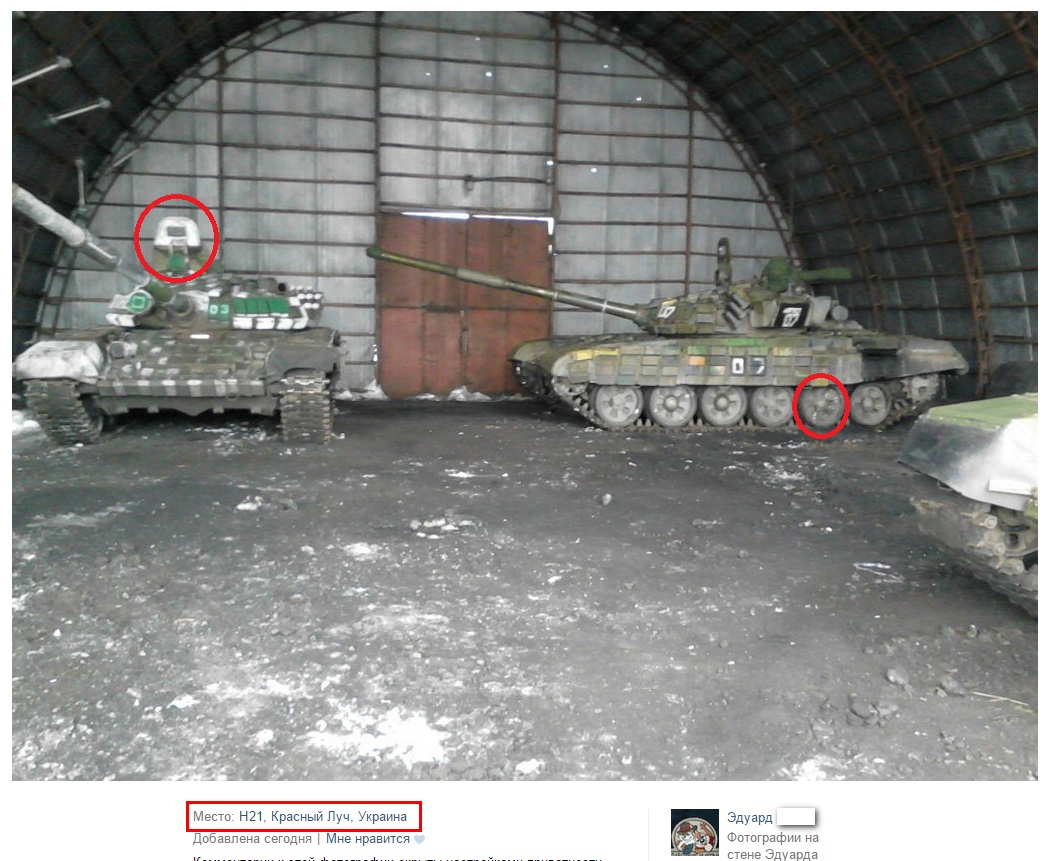 Picture 7. The cupola and the strips.

Also, the tanks belonging to August have green spots. Somebody in Russia did not want Russian tanks to be identified. However, the stupidity of Russian soldiers made those attempts useless. The real number of this tank could be seen on its ammunition box: 557. There is also the number of the nearby tank on the helmet of that tank’s crewmember: the number is 559. 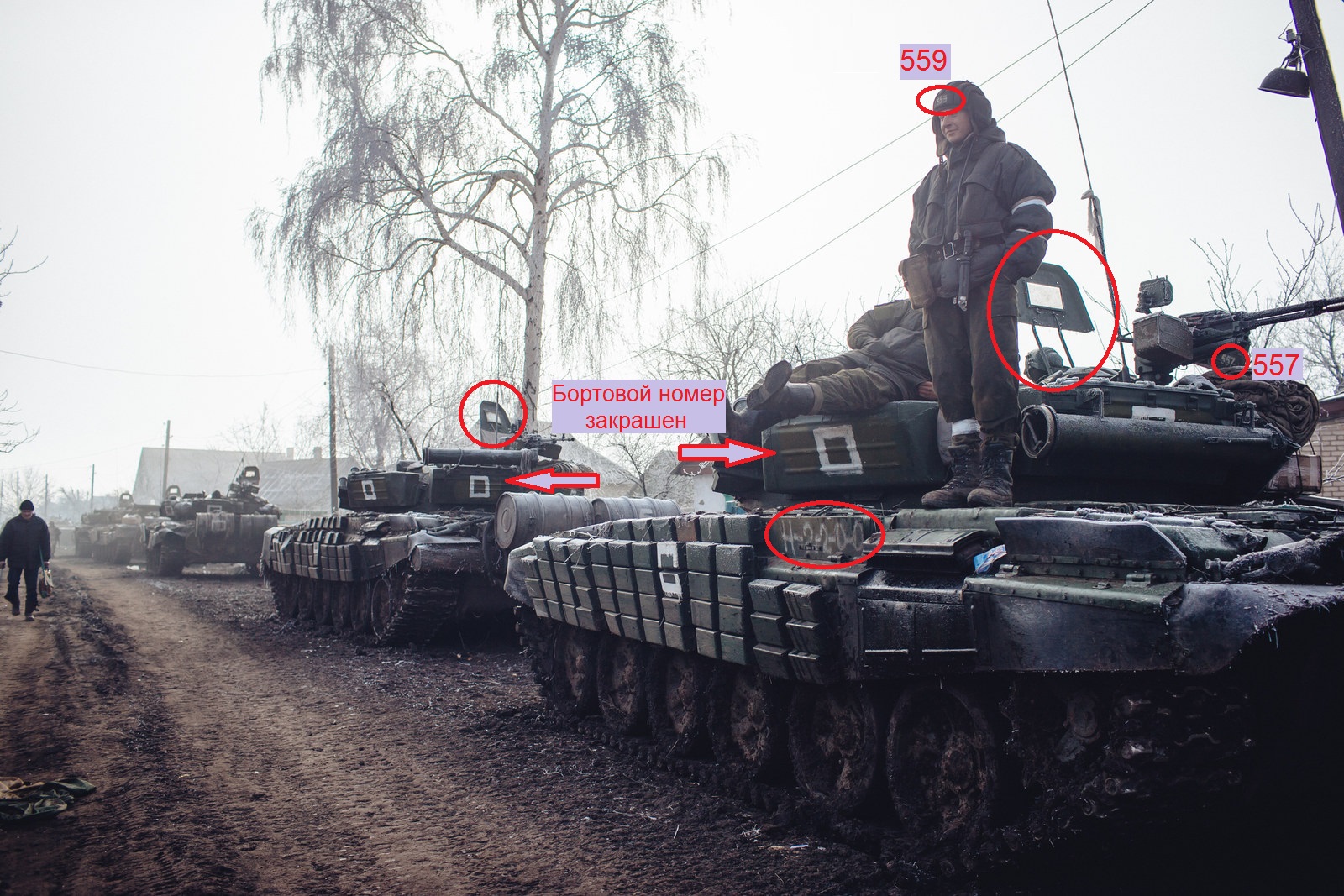 So, how many tanks are there in the August battalion? First, note that the tanks of the August battalion have two digit numbers, which is not army standard. At the same time, the numbers that were painted over had three digits. And that is a standard for Russian and Soviet armies. There is no point in hiding Soviet numbers since USSR does not exist any more. However, it is against Kremlin’s interests to disclose Russian numbers. That’s why the soldiers were trying so hard – to the extent of their abilities, of course.

Identification numbers were not the last drop of honey in this tar barrel. The most surprising thing is that no one in Russia cared that they were again sending to Ukraine the T-72BM tanks with their unique active armor on the turret and track skirts that only Russia possesses. 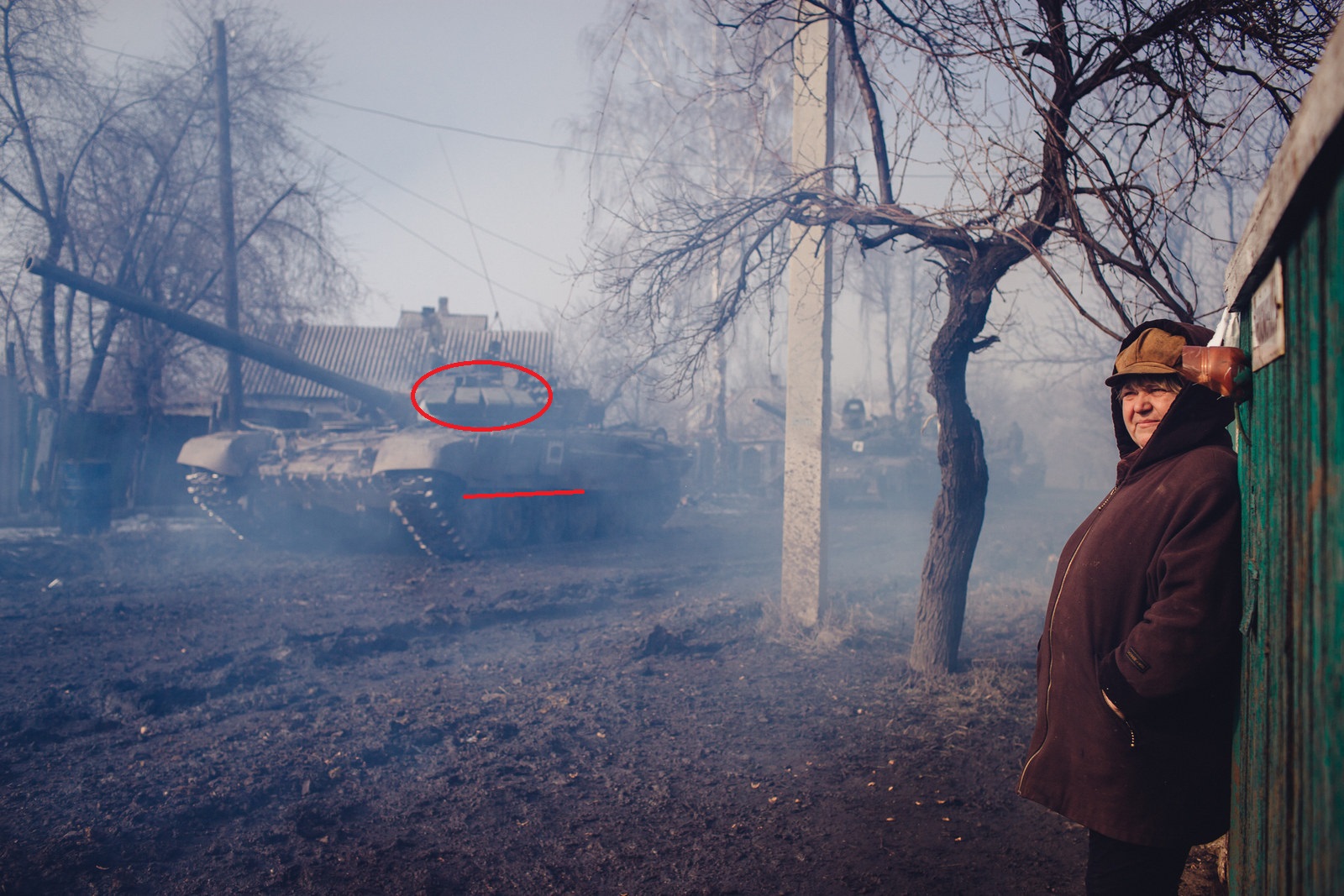 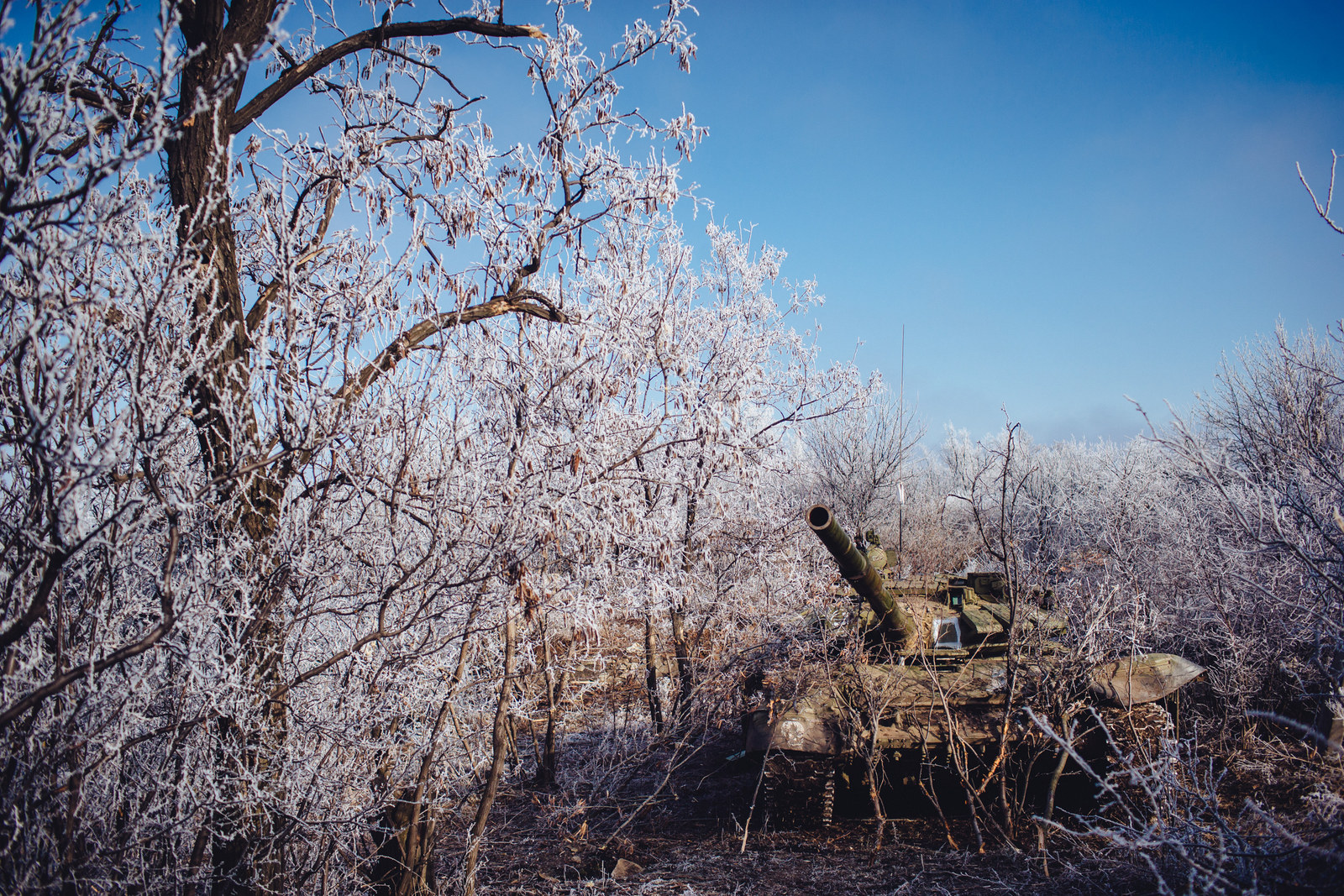 Picture 9a. In an ambush.

And that is what makes everything look so bad for the so-called “militants”. Why do Russian army tanks have the markings of the illegal armed formation August, operating outside the Russian territory? Not according to international law, that is for sure! Nevertheless, it is the international law that should be applied in prosecuting Russian authorities and participants of the aggression against Ukraine! Specifically, the prosecution should follow the war crime laws.

Finally, look at those who operate these vehicles. Why do they look so different from real Ukrainian citizens? 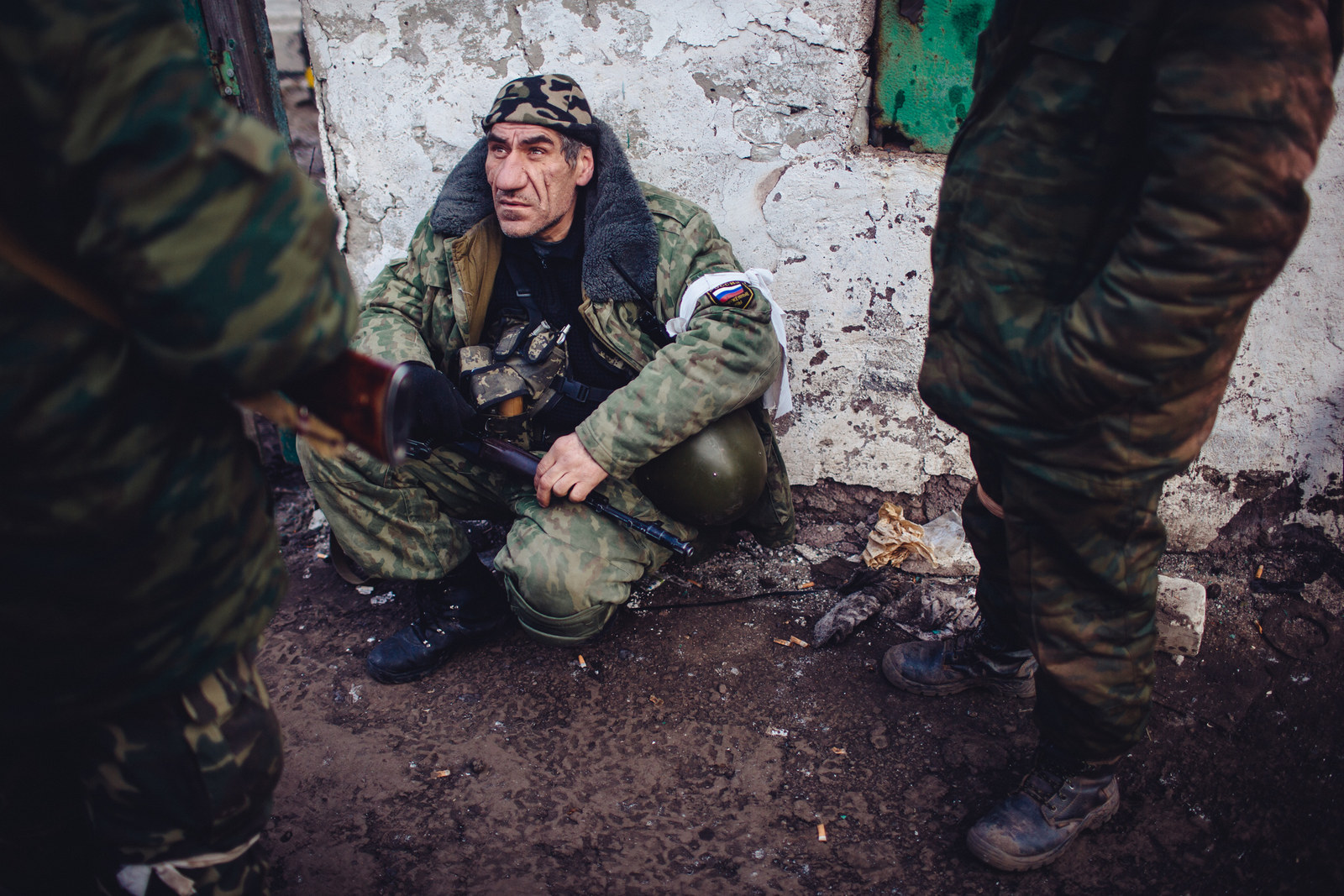 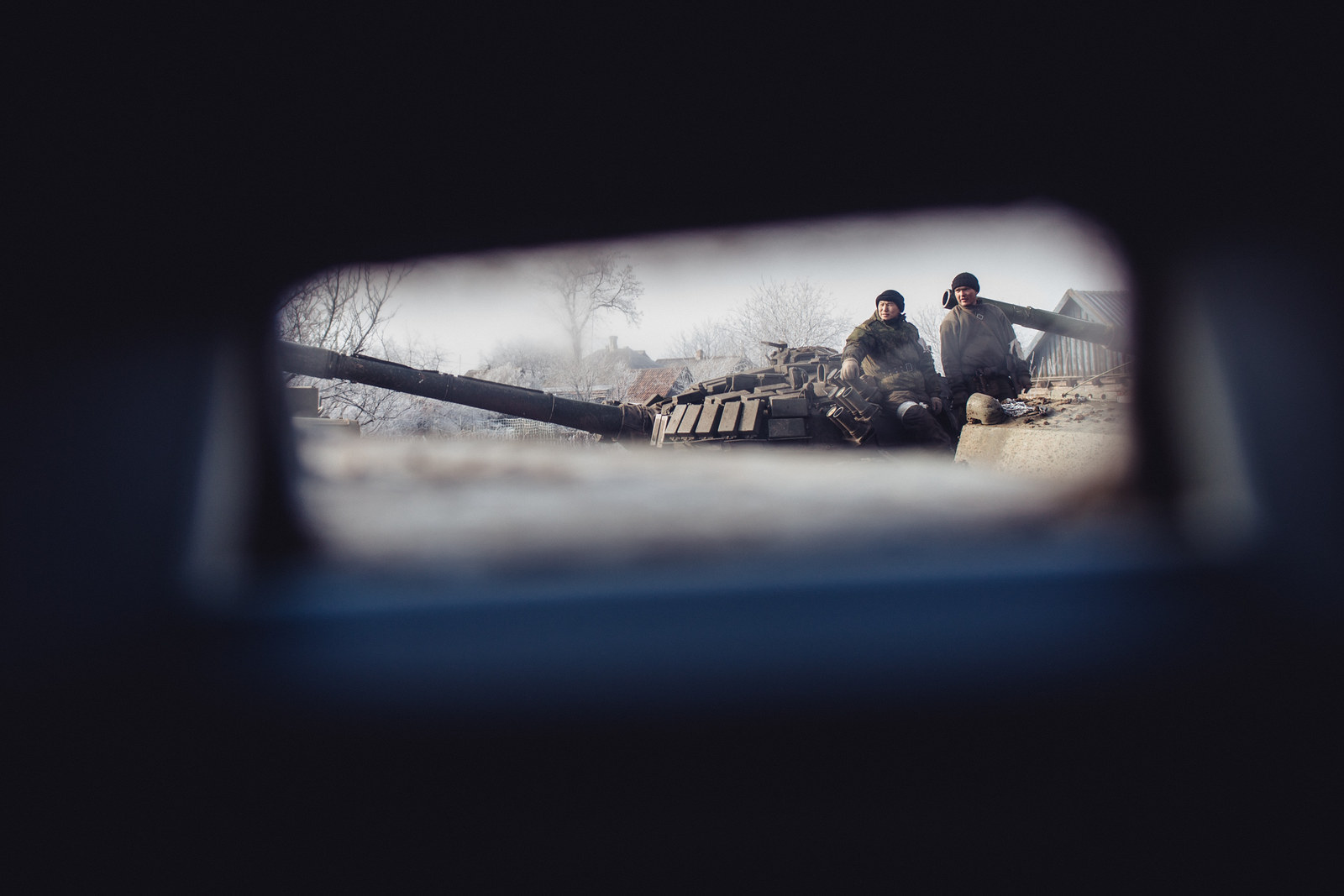 N.B.The number of tanks in a complement of a battalion of Russian Armed Forces is 31 vehicles, if the battalion is a part of a tank regiment or a brigade. Tank battalions included in motorized regiments or brigades have up to 40 combat vehicles.

One Response to “How Many Tanks Does the August Terrorist Battalion Have?”