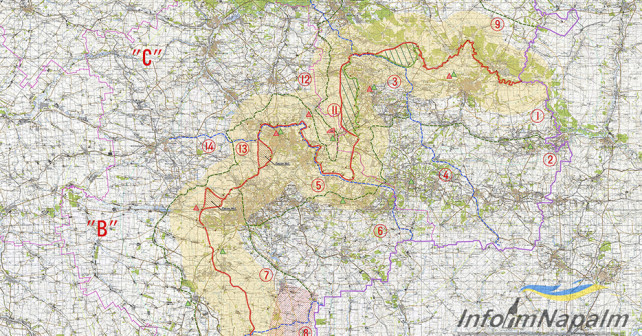 The offensive of illegal armed groups (IAG) of the so-called “Novorossia” to close the Debaltseve pocket, launched while everyone’s attention was on the intensive fighting in the Donetsk Airport, failed on January 25th, 2015. [Note: during the unsteady truce period of the Minsk Agreement, bandit groups of the so-called Luhansk and Donetsk People’s Republics managed to create a likeness of the armed forces under the patronage of the Russian Federation.]

The blitzkrieg did not work, although the idea was interesting. Probably, the pre-emptive strike on Stakhanov before the offensive played its role, resulting in the elimination of a part of the enemy’s strike force. The results of these strikes were the reason why the terrorists had to take an unprepared unit (the “August” battalion) and throw it into the battle near Sanzharivka.

A similar situation occurred in Horlivka, where a part of the terrorists’ strike forces was also destroyed. Their task was to distract the Armed Forces of Ukraine from the main directions (Horlivka-Artemivsk and Yenakiieve-Vuhlehirsk-Debaltseve) with an attack on Dzerzhynsk. According to rumors, in the area of Shevelevka mine a battalion tactical group of the enemy was destroyed while preparing for an attack towards Horlivka-Artemivsk; strike forces in Balka Skotova were destroyed as well. That allowed to maintain the positions between Horlivka and Dzerzhynsk.

As for Ozeryanivka, the illegal armed groups of the so-called Novorossia did achieve some success there. However, the deployment of their reinforcements to the settlement of Mykhailivka fell short of expectations. The enemy’s convoy was located, and that fact was reported to journalists, whose articles managed to spread fear among enemy personnel. This kept the convoy in the village during the period from January 24th to 28th. Perhaps it was a propaganda operation of some kind, though unfortunately it did not last.

During the current period, force redeployment has been observed in the areas of Yenakiieve, Pervomaisk, Zorynsk. Perhaps there will be attempts to close the pocket with converging strikes towards the area of the bridge over the Myronivske reservoir (M03 highway). Such undisguised actions by the terrorists leave many questions open. It is most likely that Russian military acting as the leaders of IAGs understand that the original concept of encirclement has already been uncovered by the ATO headquarters, and all the necessary countermeasures have been taken. In this regard, the continued attempts to close the “cauldron” while incurring heavy losses would appear unreasonable. Nevertheless, the probability of attacks on Myronivske as well as on Artemivsk from Pervomaisk and Horlivka remains quite high, especially considering the announced activities of diversionary reconnaissance groups in the rear of Ukrainian military along the M03 highway.

The attempts of IAGs to press the advance in the direction of Lysychansk should be noted separately. These activities have not been successful yet, although Lysychansk has a declarative value for IAGs, as we mentioned before. It would allow to create the appearance of control over the Severskyi Donets river crossings with subsequent deployment of forces across the border from Russia and the creation of a pocket near Shchastya.

In Donetsk, after Ukrainian Army lost control over the airport (a prosecutor will be required to establish the responsibility in this case), IAGs have not achieved any substantial advantage in the area of Pisky and Avdiivka. However, they now have the option to attack from the south and the north-east, bypassing Avdiivka (recall the convoy in Mykhalivka and the presence of terrorists in Ozeryanivka), aiming to gain control over the Donetsk-Kostyantynivka route. If the offensive proceeds successfully, the terrorists could attempt to outflank Dzerzhynsk from the west, approach Kostyantynivka, and then proceed to attack Artemivsk from the rear (!).

The evaluation of the situation and the progress of possible attacks should take into consideration the recent significant losses suffered by IAGs. Additional deployment of auxiliary forces of the Russian Army from St. Petersburg to Rostov indirectly confirms these losses.

The western outskirts of Donetsk require special attention. Over the past several days, we have observed increased terrorist activity there: they have built a checkpoint near the settlement of the Trudivs’ka mine. The pop-stars of the so-called Novorossia, “Motorolla” and “Givi” have been seen there.

It is possible that the terrorists would attempt an attack towards Donetsk-Kurakhove. We previously reported on the deployment of military equipment and ammunition to the western suburbs of Petrivskyi district; it should be noted that a part of this equipment was destroyed by Ukrainian artillery on January 27th.

The increased terrorist activity near Olenivka, Dokuchajevsk, Komsomolske, and Styla also suggests the high probability of such an attack. Also, an armored vehicle convoy of considerable size arrived from the Russian Federation near Novoazovsk and moved towards Telmanove on January 25th and 26th.

Initially we considered Dokuchayevsk-Styla-Volnovakha as the most probable attack direction, allowing access to the northern outskirts of Mariupol. However, after the unsuccessful shelling of the city from MLRS BM-21 “Grad”, the group of the Russian military will not take risks there because too much attention is currently directed there. However, the Styla-Dokuchayevsk-Vuhledar direction, with the flank covered by a simultaneous attack on Donetsk-Kurakhove, appears to be the most attractive one. It could provide the terrorists with a chance to reach the objectives stated by the IAG leader Zakharchenko – administrative borders of Donetsk region – near Velyka Novosilka.

The high probability of actions by the terrorists in the south and south-east directions is indirectly confirmed by the destruction of the railway bridge near Rozivka; this considerably limited the mobility of Ukrainian army.

Everything we’ve said here should not be taken as a dogma, because IAGs suffered substantial losses trying to implement their original plan, and it’s likely that at the moment they don’t have sufficient resources to proceed with it. Still, it is worth remembering that these resources could be provided by the Russian Army forces concentrated along the borders of Ukraine.

Obviously, the enemy could resort to non-standard solutions.

After heavy advertisement by the IAGs of aircraft and helicopters in their possession, Ukrainian artillery delivered pre-emptive strikes on the places of concentration of the military equipment in Luhansk, with the aim to stop the speculations on the subject of aviation. Well, we have seen the airplanes, we should now turn our attention to helicopters that could be used by the terrorists for attacks. Recall that in September 2014 we demonstrated photo evidence of the concentration of the Russian Ka-52 combat helicopters in Rostov region near the Ukrainian border.

Remember that no matter how daring and cunning the actions of the enemy are, the noose around its neck inevitably tightens. And remember that the truth is on our side, and truth is a strong ally…

One Response to “InformNapalm Team’s Summary Assessment as of January 28, 2015”