Involuntarily Military Service: How Russia Conscripts Imposed with a Contract and a Trip to Rostov 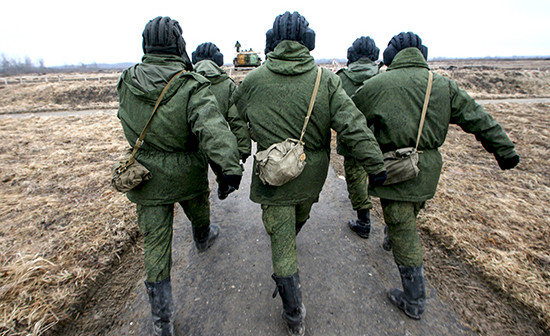 Human rights activists record growth in the number of complaints from conscripts who have been persuaded to sign contracts that require service in Rostov Oblast. Conscripts face pressure when they try to terminate the contracts, but they fear doing military service on the border with Ukraine.

Two soldiers from the 7th military base of the Russian Defense Ministry stationed in Abkhazia [in the past the 131st Maykop Brigade] came back from a mission in Rostov oblast at the end of 2014. They appealed to the military prosecutor of the Southern Military District to provide assistance in terminating their military contracts (copy of the application is available in Russian at RBC Information Systems). These two solders, who asked not to mention their names, told RBC that they do not want to continue military service after the last mission. Upon returning to base, they took a vacation until mid-February, from which they have no plans to return. Now, as they claim, their commanders are threatening their parents with criminal charges of desertion.

RBC correspondent met with the two soldiers in a southern Russian city, where they left from Abkhazia. They are hiding from their commanders while waiting for the response from the prosecutor’s office.

The two young men were called up for military service in December 2013. In August of 2014 the commander of an artillery battalion, according to them, persuaded them among other rocket batteries conscripts to sign a two-year contract. Their battery has BM-21 “Grad” multiple rocket launchers in its arsenal. At the same time commander promised verbally to them that they will be released from the service in December 2014, as planned before, even though the contract would formally expire only in 2016. He promised that they would be sent on military exercises in Crimea, and in return they would be discharged without any problems in December, with contract payments for participating in the military exercise.

Now the soldiers claim that the contracts were signed in violation of the law. “Before we signed the contracts we had neither the physical fitness test nor additional medical examination. We have not received any salary since the contract was signed. In fact we stayed conscripts,” one of the soldiers interviewed by RBC said.

The soldiers had to spend several months in Rostov Oblast instead of Crimea. What the need for their presence in the region was, the artillery soldiers did not tell. “We have signed a non-disclosure agreement,” the soldiers said.
However, RBC was able to find pictures of some soldiers and their commanders of the rocket battery of the 7th base collected from Russian social networks by Ukrainian volunteers from the team of Informnapalm webpage. On those pictures the soldiers and their commanders pose in front of the loaded Grad rocket launchers near the border with Ukraine (based on the geolocation mark). Among others we have found the two soldiers who were interviewed. 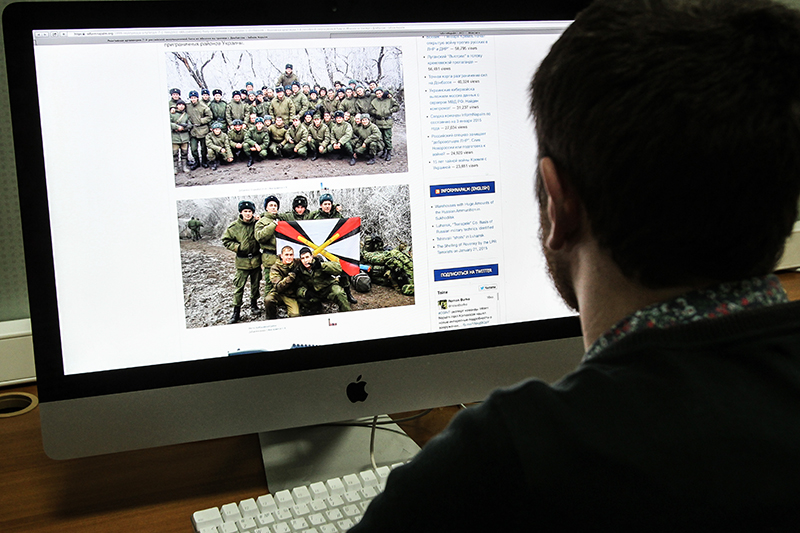 The RBC reporter found the soldiers who he interviewed in the pictures of Russian artillery soldiers on the border with Ukraine. Photo: Yekaterina Kuzmina / RBC

Photos are dated from the beginning of November 2014. Two months earlier, on the border with Ukraine, Anatoly Terekhov, a 7th-base contract soldier from Astrakhan Oblast was killed. It was reported first by Anatoly Salin, an expert from the Astrakhan Committee of Soldiers’ Mothers and later confirmed by local media.

Forcing soldiers to sign a two-year contract with a transfer to Rostov oblast for military exercises and an informal promise of early dismissal (which does not always happen) has also occurred in other combat units, according to the Organization of Soldiers’ Mothers from different regions.

“Our son has been told that the contract is just a formality. It is required because the conscripts can be sent to military exercises for only a month, and Rostov oblast military exercises require three months,” the father of one of the soldiers from the 138th Motorized Brigade (stationed in Leningrad Oblast) told the RBC journalist.

His son received not just a verbal promise of discharge at the time when conscription ends, but also a corresponding certificate. The same certificate was also given to his colleague: “The command of the military unit is obliged to dismiss a soldier who signed a two-year contract at his own request at the end of the conscription period (copy of the certificate signed by the Chief of Staff is available at RBC)”.

Vladimir Trignin, Chairman of the Military Collegium of Advocates, sees no difference between contractors and conscripts when participating in military exercises. Both conscript soldiers (if he has served at least 4 months) and contract soldiers can be sent to the conflict zone, said Trignin. “Most likely, for individual commanders it is necessary to recruit contract soldiers because they don’t have enough conscripts. It is convenient to sign a contract with conscript soldiers since after 3 months of service they have passed sufficient training, know how to use a weapon, and have obtained a military specialization” states Trignin.

According to the lawyer, the commander’s promises and certificates will have a negligible effect when soldiers try to challenge the contract. In the garrison court, where they should go, an argument could be evidence that they were forced to sign the contract or the lack of wages payment, he said.

“However, the key argument for the court will be a signature on the contract,” said Trignin. According to the “Regulations of military service” and the Federal Law “About Military Duty” , the contract shall be considered valid after signing by both parties: namely, the soldier and the person authorized by the unit commander.

By signing the contracts at the military unit location, the command violates the order of the Minister of Defense “About the approval of the Interim model provision of paragraph ( Selection for military contract service)”, insists Natalia Zhukova, the chairman of the Nizhny Novgorod Committee of Soldiers’ Mothers. She sad that according to the law, at first people willing do a contract service should sign a draft of the contract to prepare the command that will make it official.

Since April 2014 she has regularly received requests from parents with similar stories. After receiving a request she sends another request to the military prosecutor’s office and to the higher command. Zhukova was able to help 18 conscripts according to the record in the registration journal. Among them are soldiers from the 9th Motorized Rifle Brigade (Nizhny Novgorod Oblast) and the 6th Armored Brigade from Mulino (Nizhny Novgorod Oblast).

“There are a lot of reasons for parents to be concerned,” said Zhukova. “We know about the death of Armen Davoyan and Alexander Voronov during the military exercise. They were contract soldiers of the 9th brigade.” We also know that Peter Khokhlov, a private from the same brigade, was captured by the Ukrainian military. He signed the contract at the time when he was a conscript in 2014. In the fall of 2014, private Khokhlov was exchanged for captured Ukrainians and handed over to the pro-Russian militia. A more detailed investigation of this story was made by RBC in October 2014.

On January 26th, 2015, Zhukova sent a statement to the prosecutor’s office about two university alumni who were persuaded to sign a military contract for two years instead of conscript service. As a result, instead of a training unit they were sent to the 6th Tank Brigade – permanent combat readiness unit. They were promised by the junior command officers to be soon sent to Ukraine. After intervention by their parents and soldiers rights defenders they were left in the unit. The investigation, with the participation of higher military authorities, is still going on, Zhukova said.

The Soldiers’ Mothers Committee also succeeded in a motion with the garrison prosecutor’s office of military command from the 36th Independent Motorized Rifle Brigade in Borzya (Zabaykalsky Krai, Russia) (document available at RBC) for the untimely dismissal of five soldiers.

These soldiers were conscripts before the summer of 2014. After that they were persuaded to sign a two-year contract, with a promise of possible dismissal in November 2014. However, that did not happen. The prosecutor’s office acknowledged that their conscript service had to end in November 2014 but at the same time did not find violations in the act of signing the contract.

Peredruk also told RBC about the situation regarding a soldier drafted from Perm Oblast to serve in the 51st Airborne Regiment, Tula, who was forced to sign a contract in August 2014. A statement on the webpage of the Perm Ombudsman reports that human rights defenders managed to get the court and prosecutors office to recognize that the actions of military command were illegal.

Requests for help are also coming to Murmansk human rights activist Irina Paykacheva from conscripts who signed contracts in the 200th Independent Motor Rifle Brigade of the Russian Ground Forces based at Pechenga in Murmansk Oblast. According to her, some of the requests are coming from soldiers who returned from Rostov Oblast and were trying to terminate their contracts.

Excesses on the ground

In cases of possible pressure on conscripts during the signing of the contract it is most likely to be a result of “excesses on the ground” or even false statements of soldiers, parents and human rights defenders that pursuing personal goals, a defense ministry employee explained to RBC. The army is interested solely in a voluntary decision on the admission of the service contract, insists the source. If there are any violations during the signing of the contracts the soldiers must appeal to the military prosecutor’s office.

Melnikova received an answer from Victor Goremykin, the Chief of the Ministry of Defense main human resources command, on a request about a similar situation: “The commanders of military units are not empowered to enlist conscripts for contract military service. All enlisting process is carried out through the recruitment offices (contract military service selection) located at the military registration and enlistment offices,” said an explanation from Goremykin dated by September 16, 2014.

Unit commanders just do not have the required number of contract soldiers for the rotation of Rostov army group, explains Melnikova. “I think they are trying to comply with the requirement that only contract soldiers should participate in this secret operation,” says the human rights activist.

It is possible that there is a lack of contract soldiers in military units, confirmed military expert Alexander Goltz. “In the process of the military reform was an idea to form 10-15 constant readiness units with dominantly contract soldiers,” says Goltz. “These forces would be sufficient to win a quick victory over any enemy in the Commonwealth of Independent States (CIS), but were designed for a rapid conflict, such as defense from Taliban invasion in Central Asia. Problems arose when the current operation in Rostov oblast was delayed by almost six months that requires regular rotation”.

No Responses to “Involuntarily Military Service: How Russia Conscripts Imposed with a Contract and a Trip to Rostov”