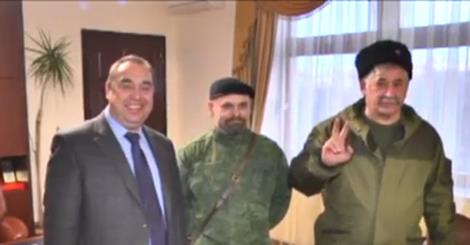 Article updated on December 31, 2014 with additional quotes and explanatory notes for English speaking readers provided by the author and translated by Eugenia Zlamanuk.

In a recent interview, the Minister of Internal Affairs of Ukraine, Arsen Avakov, called the “New Maidan” a project of the Russian Federal Security Service (FSB). I am more than confident that the Minister had the right to say so. He seems to know what he is doing. But there is another project of the FSB I am interested in, which has been around for almost 25 years, exists in the eyes of the world, and, unlike the Ukrainian Maidan, is quite bloodthirsty. The project is called “the Don Cossacks” (after the Don river in Russia).

The subject of my research is a man named Nicolai Kozitsin. He can be called an Angel of Death. Wherever he appears, blood runs and people die, cancerous tumors of “independent republics” pop up in the territories of the former Soviet republics.

The first conflict was in Transnistria. This was the debut of Mr. Kozitsin and his Cossacks. Or rather those that are called “cossacks” in Russia today. They are quite a strange group of people who operate throughout the entire territory of the former Soviet Union, have unlimited access to all kind of weapons in any quantity, and operate with impunity. In Transnistria, where the practice of independent wars only started to work out, they had to operate under the supervision of the active military troops (14th Army of the USSR, and later of the Russian Federation). The result of this first war was a new territorial entity known now as the Pridnestrovian Moldavian Republic (PMR).

Within a year after the end of the conflict, another tragedy happened in the territory of the former USSR — the Georgian-Abkhaz conflict. The situation here was most favorable for the FSB because, as a result of the armed coup, a former KGB operative and former member of the political Bureau of the Communist Party of the Soviet Union came to the power in Georgia. It was, perhaps, the only conflict, in which agents of the FSB directed both sides. Of special interest are the supporters of the Abkhaz independence. Among these “socialist philanthropists” are the following emblematic figures: the leader of Don Cossacks Kozitsin, head of the Chechen “volunteers” Shamil Basayev, Commander of the Russian Emergency Situations Ministry Sergei Shoigu, who supplied both the Cossacks and Chechens (and what he supplied them with is a separate subject).

If we have become accustomed with Kozitsin, the emergence of Basayev in the ranks of pro-Russian militia not only looks strange but even suspicious. A year earlier, the Chechens supposedly had entered into a confrontation with the Russian authorities and achieved the complete withdrawal of Russian troops from Chechen territory. So, under the guise of self-determination, an armed force was established in the north Caucasus that could influence events that were objectionable for Moscow.

Mr. Kozitsin had developed a warm friendship with a Chechen leader named Dzhokhar Dudayev, which he continues to brag about even now days. This friendship resulted in the signing of the Treaty of Friendship and Cooperation between the Great Don Host and the Chechen Republic of Ichkeria on August 24, 1994. As a result, participation of the Cossacks in the Chechen events was reduced to zero. These “heroes” nobly closed their eyes to the crimes committed in Chechnya against Russian-speaking citizens by unknown forces (it is possible that these forces have acted under the KGB/FSB).

The Cossacks didn’t go to fight in Chechnya, limiting their efforts by helping with the release of Russian prisoners of war. The first Cossack unit sent to Chechnya was established by the Defense Ministry of the Russian Federation only in 1996. And these were the Terek Cossacks, not Kozitsin’s! Perhaps, not without the help of Mr. Kozitsin, this unit suffered heavy losses and was disbanded. But after the first Chechen war ended and was seen as a defeat for Russia, Mr. Kozitsin and his troops stayed away from this tragedy. They had chosen to participate in another, this time international project, in Yugoslavia.

Here again, Mr. Kozitsin is a Royal friend, but now of Slobodan Milošević. Mr. Milošević, like Mr. Dudayev, as is well known, finished poorly. Which cannot be said about Mr. Kozitsin. He is now a “peacemaker”! But it’s time for him to return to Russia: the Chechen conflict is to be continued. It only needs an excuse to go from passive to an active phase. A wave of bombings of apartment buildings rolled throughout Russia. Followed by an attack in Dagestan, these explosions turned sentiment in Russian society toward a military resolution of the Chechen conflict.

So, the machine of the Second Chechen War was started. Dropping the subject of rumors of FSB’s tricks in Ryazan, I want to draw attention to developments related to the terrorist attack in the city of Volgodonsk. Vladimir Zhirinovsky best described the explosion in this city at the meeting of the State Duma.

Vladimir Zhirinovsky, Leader of the Liberal Democratic party of Russia:

… Remember, Gennadiy Nikolaevich, You claimed on Monday that an apartment building in Volgodonsk was blasted. It was three days before the explosion itself. It can be considered a provocation: the State Duma is notified that an apartment building was allegedly blasted on Monday, yet it explodes on Thursday. (…) How could it happen: your people report to you that at 11AM Monday apartment building explodes, yet Rostov region administration knows nothing of this report? Everyone is waiting for something. In three days blast happens and then the measures are taken.

An excerpt from the transcript of the Russian State Duma morning plenary meeting on September 17, 1999.

If the explosions in Moscow can be explained by the desire to achieve a propaganda effect, the choice of Volgodonsk might seem somewhat strange, if you do not take into account one circumstance. This city is located in the Rostov region, that is, the region of the Great Don Host. In view of the fact that Volgodonsk was founded in the Soviet era, unlike Novocherkassk and Rostov-on-Don, has no relation to the Don Cossack history, Mr. Kozitsin’s part in the selection of the object for the attack can be considered a speculation that  deserves serious attention. What if the attack was not only planned but also executed by Kozitsin’s Cossacks? Especially when you consider that the most important result of these explosions and the Second Chechen War was the coming to power of the current “Liberator of the Nations” Vladimir Putin.

Mr. Kozitsin’s merit was greatly appreciated by the Russian national security agencies. In 2002, he received the Russian State G.K.Zhukov Award! This award was established in 1995 by Federal law “On the perpetuation of the victory of the Soviet people in the Great Patriotic war of 1941-1945”. It is awarded by decree of the President of the Russian Federation in three categories: for achievements in military science, creating new models of weapons and military equipment, and for the best works of literature and art. In accordance with the Decree, the inter-ministerial commission for the Marshal G. K. Zhukov Award of the Russian Federation was established; it is composed of 35 persons and chaired by the Chief of the General Staff of the Armed Forces of the Russian Federation.

What has Kozitsin received this award for? Not for literature after all, and not for the creation of new models of weapons. Which leaves us only the achievements in military science. I would love to see the presentation of his nomination; how many dark pages of Russian history could be revealed! Also, it would be nice to know, for what services Kozitsin was awarded not only the Order of the Red Star, but also a combat order of the Red Banner. But this is not all. In 2007, the head of the FSB Mr. Patrushev awarded Mr. Kozitsin a commendation and a commemorative knife! Where did this love between the organization responsible for the almost total extermination of the Don Cossacks, and a chief and friend of the victims of this organization come from?

Oh yes, Kozitsin is associated with the FSB!

The possibility of a nuclear accident on the banks of the two biggest rivers in European Russia did not worry Ataman Kozitsin. He, like his leaders from Moscow, is far more concerned with the possibility that Ukraine will decide its own fate. And here Ataman Kozitsin with his Cossacks again goes to war, this time against “ukro-fascists”. But why does he fool himself?  After all, among his friends, are…. international terrorists. His Cossacks took part in the Russian National Unity demonstrations! Now, in Ukraine, they are next to you. One can see such nonsense on the website of their Orthodox Army:

“Having a common Aryan root, Great Russians, Little Russians, Belarusians, and Cossacks lived side by side, and walked together on the path of historical development. But while each of the first three races, despite general similarities of cultures, has not been denied their own language, only the Cossacks have been denied that right.  Because the only “fault” of these freedom-loving people is that no Cossacks ever distanced themselves from Russia, serving its ancient function of being a guarding shield of the Aryan community!”

After all Arsen Avakov, you are right, with one little amendment. The Third Maidan is not a project of the FSB, it is only one little item in the huge plan. This plan is complex and long; that’s why a lot of blood and tears will be shed if the world is going to look at its implementation indifferently. Already one can definitely say that after Ukraine, Karabakh will be set on fire; and then, before you know it, the Russian Cossack “peacekeepers” will remember about “harassment of the Russian-speaking population” in Kazakhstan. A similar performance in the Baltic States could be orchestrated easily. So, leaders of the developed world democracies will have to unequivocally choose sides in the current conflict.