Luhansk “Shot” in the Head of Kremlin Propaganda 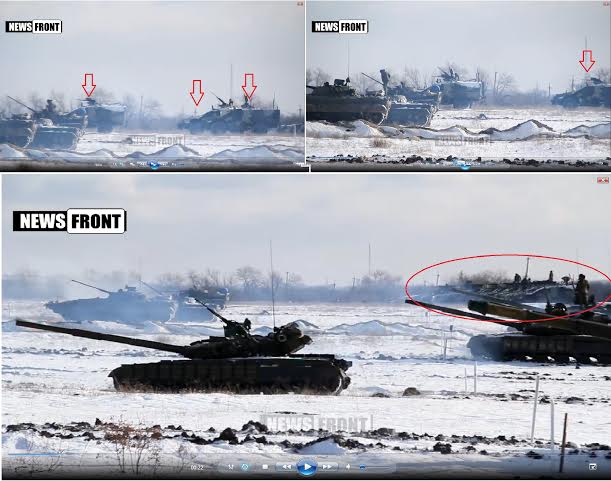 A new fatal mistake of the Kremlin propaganda has drawn the attention of the InformNapalm team. Once again, it allowed us to document the facts of invasion of Russian troops and providing the terrorist groups with technical assistance, and destabilizing the situation in eastern Ukraine.

This time, Russian light-armored vehicles based on the KAMAZ-43269 have been filmed in Ukraine. They are manufactured in several models under different names: BPM-97, “Dozor” (Russian for “Watch”), and “Vystrel” (“Shot”).

One can see about 10 vehicles of this type on the video of yet another “military exercise” in Luhansk on December 12, 2014, originally showed by the LPR/DPR propaganda TV channel News Front and then picked up by the Russian TV channel Vesti.

The fact of appearance of these vehicles on the exercise in the Luhansk Oblast can be compared to the emergence of the Russian T-72B3 tank supposedly taken by terrorists from the Ukrainian army.

By now, about 150 of these vehicles have been produced. They have never been delivered to Ukraine before. Therefore, the only way they could get to the Luhansk Oblast was with the Russian army.

When the video of the military exercise using KAMAZ-43269 in Luhansk was first shown on the local channel, it could have been mistaken for a subtle hoax because it could not have been true. The origin of the vehicle is all-too-obvious. The original video is very clear: you can see all the details of the vehicles. An error in identification is not possible, as are impossible the purchase of it “in a local supermarket” or the production by Luhansk “craftsmen”.

However, when a part of the video was reported by the Russian channel Vesti, it became clear that it was a fatal error of the Russian propaganda. 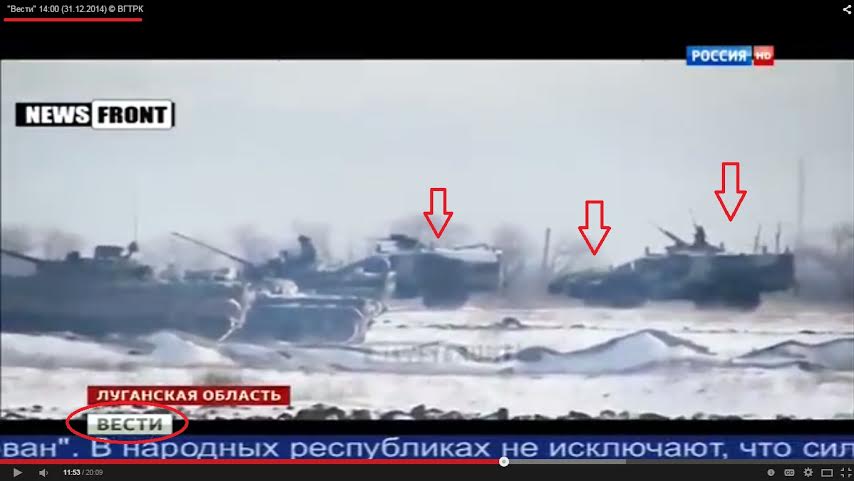 But this is not the only miscalculation of the Russian propagandists. They have managed to leave their tracks in Wikipedia. In the article describing BPM-97, they added a line about a combat use of it with a description of the Luhansk exercise, without thinking that it proves once again that Russia sponsors the terrorists. 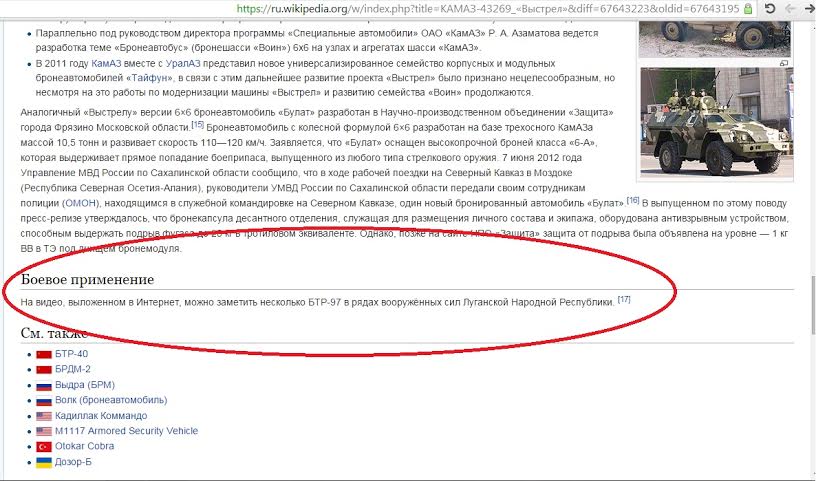 Translation: Combat use: On the video posted in the Internet, one can see several BPM-97 of the armed forces of the Luhansk People’s Republic.

The material was published in Wikipedia on the morning of January 1, 2015. The very next day, not only the mention of the combat use of BPM-97 disappeared from the Russian page, but the page itself was renamed. The reason was stated as “incorrect name of the KAMAZ plant”.

However, Wikipedia keeps a complete history of edits and changes which can detect these errors:

It’s worth of mentioning that the English Wikipedia article on BPM-97 listed Luhansk People’s Republic as one of the users of this vehicle (http://en.wikipedia.org/wiki/BPM-97) but that line was removed on January 15, 2015.

It is not a secret for the most people in Ukraine that the Russian armed forces and security services take an active part in the conflict in Donbas. Since the occupation of Crimea and the beginning of the undeclared war with Russia, the InformNapalm team has been providing a whole array of facts as evidence of the Russian military aggression. Many of them are obtained through open sources intelligence (OSINT) information.

This material was prepared by Al Gri and Roman Burko specially for InformNapalm.org and translated by Sveta Kemblowski.

3 Responses to “Luhansk “Shot” in the Head of Kremlin Propaganda”