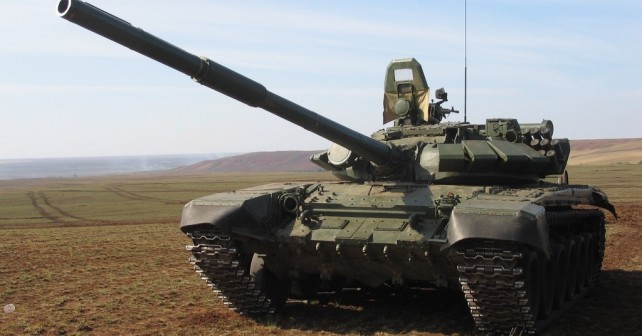 Ukrainian military sources and various international military experts have all pointed to the fact that the separatists are using T72 tanks that are of Russian military origin. The Russians, as usual, vehemently deny this arguing that these tanks must come from Ukrainian military stores. However the main battle tank of the Ukrainian military is the T64. The primary reason Ukraine adopted the T64 over the T72 upon independence from Russia was that Ukraine inherited the T64 production factory in Kharkiv. 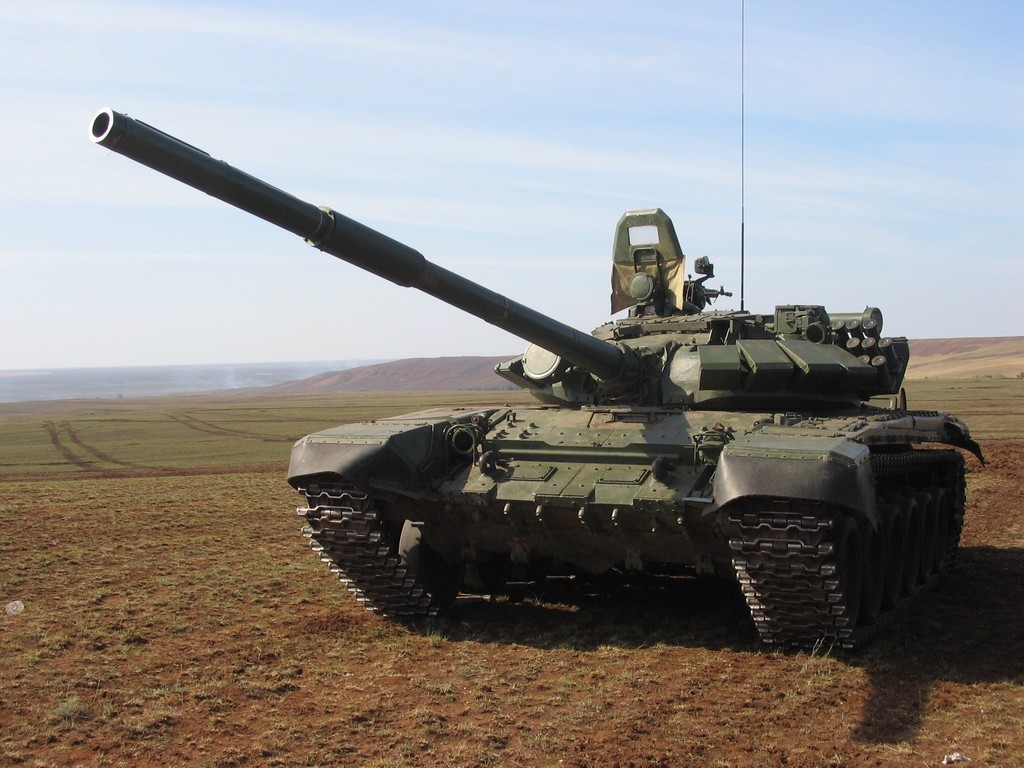 However, while the Ukrainian military has based its tank forces around the T64 (now heavily upgraded) it certainly must still possess T72 model tanks in its stores, despite selling large quantities of these on the international market.

Russia on the other hand continued to use the T72 and has applied a large number of modifications and upgrades to this tank. After the collapse of the Soviet Union and during the first years of this tumultuous period the differences between the tanks of different Soviet Republics were trivial or entirely absent. However, after time passed, the approach towards the upgrading of these tanks started to vary from country to country. Russia itself realized its T-90 program was too expensive to meet the needs of all its forces and it therefore started modernizing the T72. These numerous modifications make identification more confusing, but also allow for the identification of the origins of certain models, due the fact that these models were never used by Ukraine, and in some cases never exported out of Russia.

So what is the Russian argument about the origins of the T72s in Ukraine?

Here is a statement from a news article quoting the `Independent Military Survey’ on the T72.

“The DNR and LNR know how to repair damaged military equipment and restore equipment they discovered in warehouses. At the end of June, militia occupied the tank base in Artemivsk. Ukrainian T-64 and T-72 tanks were kept there. Subsequently, military units of Novorossiya were kicked out of Artemivsk by the Ukrainian army. Yet the militia managed to start up some machines from the base and took these tanks with them. Also some tanks from the Artemivsk base were transported by trailers deep into DNR territory. Therefore the T-72 in Donbas should not be a surprise”. (http://nvo.ng.ru/realty/2014-11-14/1_phobia.html)

If this was true one would expect two things. One, that the tanks would have been taken to Donetsk to where the DNR has set up a repair factory for armored vehicles, and not be seen driving, or loaded on transporters in military columns coming from the Russian/Ukrainian border regions. Secondly, that the Ukrainian T72s would be repaired (as quickly as possible) and put into service. They would therefore largely look like unmodified (original model) T72s from the old Ukrainian stockpiles. They would certainly not have been converted with specialist Russian components, that requires time, skills, huge finances, and access to the technology. Finally, with the pressure of war (remember until Russian intervention in August the DNR and LNR were beginning to collapse on the battlefield) one would also expect that the tanks would look like they had been standing and rusting in the open for decades. You can see this clearly on many re-commissioned Ukrainian armoured vehicles, particularly in the period leading up to the Minsk ceasefire when the Ukrainian armed forces was rushing vehicles from its stores to the front line.

When one inspects the tanks in question, based on available photographic and video evidence,the argument that the heavily upgraded, well maintained, separatist T72s are tanks that have been stored in Ukrainian depots since the early 1990s, therefore begins to look very shaky indeed. 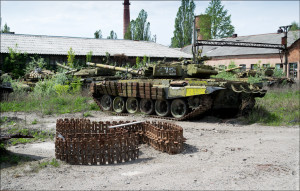 The T-72, entered production in 1971, was first seen in public in 1977. Although there are similarities in appearance between the T64 and T72 this tank was not an upgrade of the T64 but was rather a new design.Below is a survey of the different T72 tank models that have been identified in Ukraine and an explanation as to the characteristics of the models. A full list of the many different variants of the tank can be found on Wikipedia (http://en.wikipedia.org/wiki/T-72_operators_and_variants)

This is one of the most modern T72 tanks available. According to Wikipedia it is equipped with a new fire control system, new ballistic computer to reduce crew firing calculations and improve accuracy, and new thermal sight to provide night/day all weather combat capabilities. The main means of identification includet: explosive-reactive armor Kontakt-5, Sosna-U gunner’s sight installed on the turret, and the infrared lamp portside is missing. This model was first delivered to the Russian 20th Field Army in summer 2013 and its Armored Guards Brigade in October 2013.

The modernization of a T-72B into T-72B3 at Uralvagonzavod costs 50 million rubles. The question of how a separatist movement could afford such modernization costs on a large scale, let alone the cost of establishing such a modernization plant, is purely rhetorical. The AREDS report further states that the T72B3 was never exported from Russia. 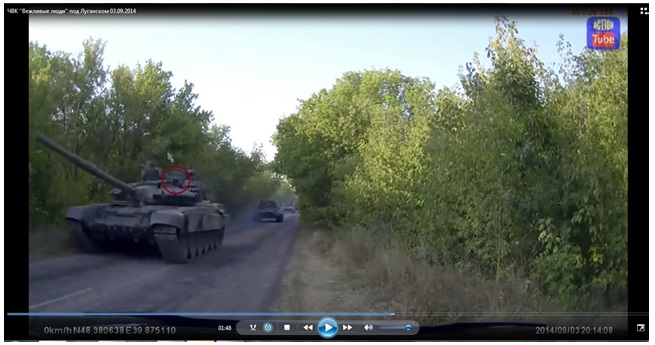 There are some important visual differences between the T-72BA, T-72BM and T-72B3.

The T-72BA and T-72BM are cheaper modernization options compared to T-72B3. They don’t have Sosna-U gunner’s sight. The T-72BA has only wind indicator, while the T-72BM does not have even this improvement. These tanks can have additional explosive armor, but they don’t have advanced night vision system. That is why they have an infrared lamp on the turret. The infrared lamp can be seen on the right hand side of the gun. Both modifications can be considered transition model from T-72B to T-72B3. Below are images of these models in ATO zone. 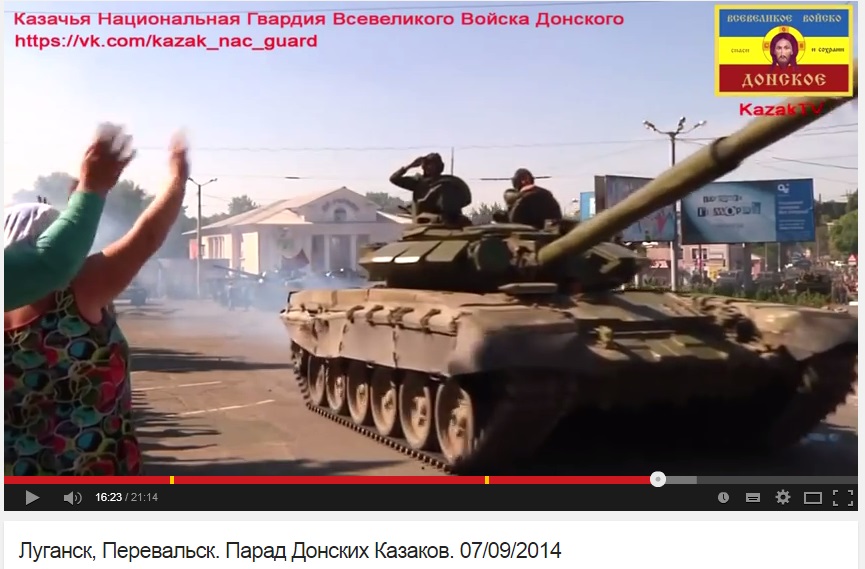 This modification is difficult to spot. That is why it is the most interesting. Kontakt-1 explosive armour was installed on all these tanks back in 1980s.

This version of the T-72 tank’s equipment can be attributed to the 1986—1989 experience from the Soviet Invasion of Afghanistan. The designs attempted to improve the protection of the tank through the `commander’s Plate’. However the quality of the plate was dubious, and when hit the plate frequently disintegrated from the tank. The original export modifications of T-72A and T-72C (as well as simplified T-72B) were not equipped with these plates at all. As with most modification progresses there were long delays and it was well after the war in Afghanistan that these tanks were upgraded with the commander’s plate. The medication programme never reached Ukraine before the break-up of the Soviet Union. 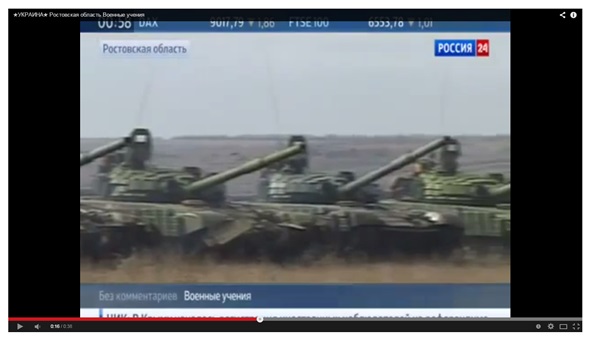 Now let’s look at photo of T-72 tanks with the `commander’s plate’, participating in Russian aggression against Ukraine:

All videos were made in ATO zone (i.e. within the territory of Ukraine). They have been at least 20 sightings of different T-72B tanks, fighting for separatists. They all are Russian modification of T-72 and they clearly demonstrate deceitfulness of the «tank base in Artemivsk» theory.

This marking is visual evidence that the tank belongs to the Russian Army. It allows one to identify the tank’s origin even when other differentiators cannot be sighted. It is believed that this marking relates to the  railway bulkiness index, notifying that dimensions of this tank exceed different clearance limits of standard railway platforms. Indeed, this sign can be sighted only on very large equipment (T-72,152-mm 2S3 Akatsiya and 2S19 Msta-S SPGs, 9K37 Buk missile systems). Yet Russian railways have denied this, stating that RZD have no authority to mark military equipment. 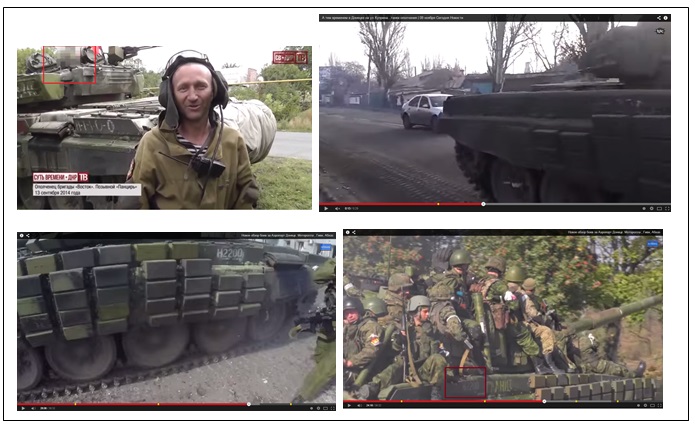 Taking into account the existence of different versions of this marking (H1100, H0200, H2200, H2300) we can assume this is some kind of tactical sign of Russian Army. Yet, the most important point is that it always appears on Russian equipment and never appears on Ukrainian tanks. Most importantly, this marking has been noted on Russian military equipment before the war in Eastern Ukraine started.

These are tanks which are openly transported by Russian heavy vehicle transporters. Please have a look at the track rolls. 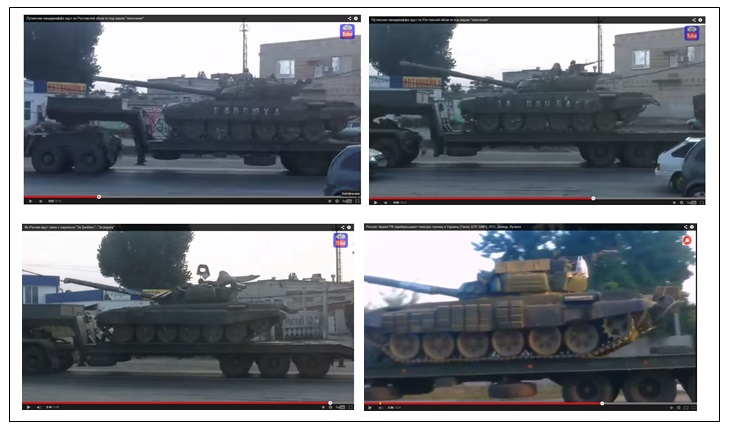 Now please have a look at this photo, made (ironically) during military training exercise in Rostov oblast. 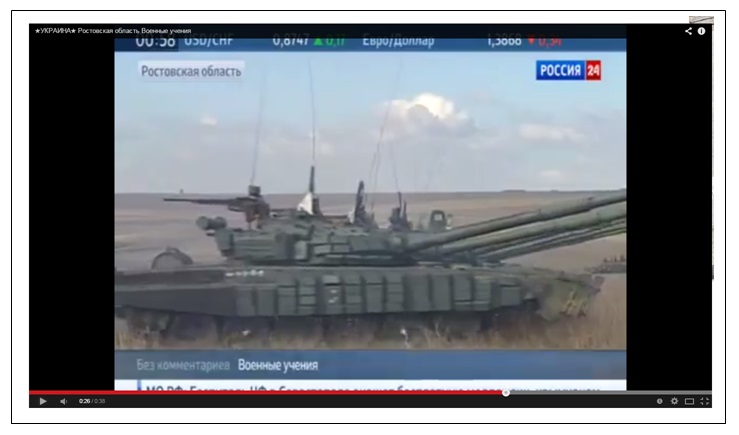 As we see above the Russian T-72B has all the identifiers we mentioned above and, in addition, part of the track wheels have white paint stains. Many of the Russian T-72Bs we analysed above have the same stains. Now let’s have a look at tanks marked with separatist insignia. 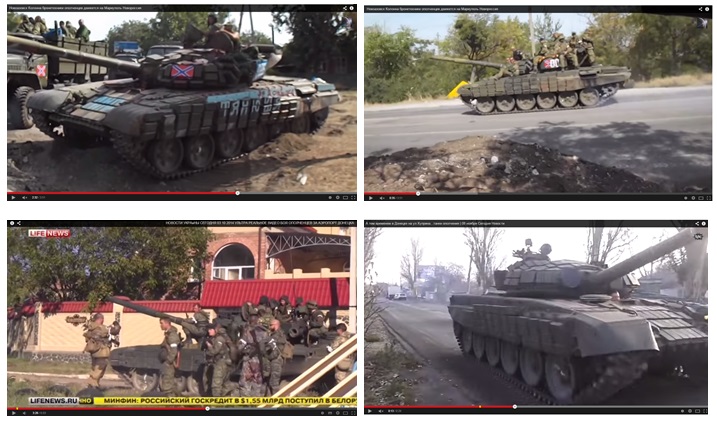 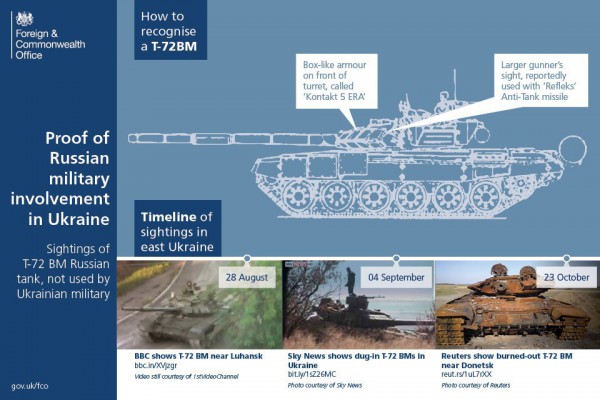 Therefore, there is no phobia as Russian journalists claim, but an unfortunate reality.

Original article in Russian by Al Gri, translated by Gennadiy Kornev, and adapted by Christopher Garfield for informnapalm.org/en