Operational Summary for October 29 by the InformNapalm Team 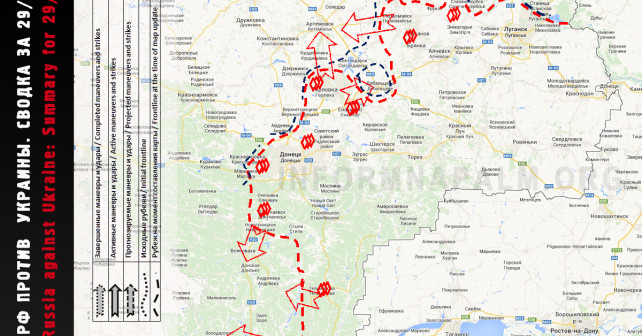 October, 30 may be the turning point in the slow conflict in the South-East of Ukraine. The ceasefire has allowed the terrorists to regroup their forces. Russian “military shops” resumed their work of providing combat equipment with increasing intensity. For the past two days alone, more than 300 vehicles were transferred from Russia to Ukraine. The main direction of movement goes via Antratsyt to Donetsk and towards Smila village and via Marynivka to Telmanove and Komsomolske. Transfer of military equipment was also noticed in the direction of Olenivka and Horlivka. 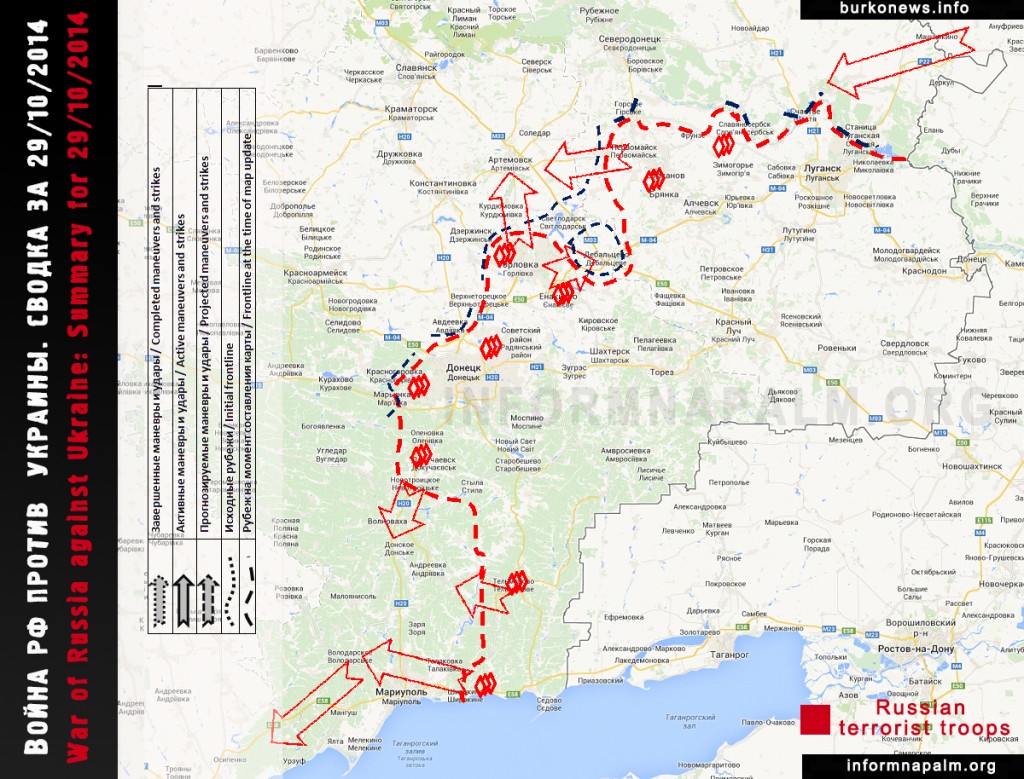 In addition, many insiders of the InformNapalm team reported the change of personnel of militant groupings: unreliable local terrorists were replaced by newcomers, “experts” from the Russian Federation. For example, in Petrovskyi district of Donetsk the following reshuffle took place: terrorists at Cargill (a factory in Donetsk) were moved to Staromykhailivka area, and many solders of the Russian Armed Forces arrived at Cargill. A similar situation has occured in Horlivka, where the locals noticed a lot of new troops with discipline and military bearing, which differ from the usual terrorist groups. Also our observers reported on the establishment of an air defense system in the area of Donetsk, Horlivka, and Snizhne (presumably S-300 system). The aviation at the Russian airfields located close to the crisis region is in the highest degree of tactical alertness.

Thus is seems that Russia is ready for a full-scale attack under the guise of the “DPR army”. The only question is where they will attack?

Considering the on-going shelling of emplacements of the Ukrainian Armed Forces in the past two days, the militants activity had decreased. But then, in the evening of October 29, a thorough preliminary bombardment began in northern Luhansk. Hirske was heavily shelled. It is most likely that this happened because Mozgovoy’s grouping wants to take back Lysychansk. This contributed to the loss of the checkpoint #32 in the area of Smilе (Smeloe). Mozgovoy’s grouping is attempting to close its right flank with Severskiy Donets River and align the front. For the same reason they are trying to cut the pocket near Debaltseve and capture Artemivsk. Otherwise, Mozgovoy is at risk to expose his forces into a `neck’, which could be cut down from the direction of Artemivsk. In the near future we can expect attacks from Horlivka and Pervomaisk to Artemivsk, and the Yenakijeve grouping will attempt to solve the issue of the pocket.

As for Shchastya, Severskiy Donets helps to keep back the militants from the south. However, the Russian Federation may take a risk to attack from Russia from the area of Voloshino. We do hope that this is not going to happen.

A lot is said about the potential assault on Mariupol. However, we think that this is not going to take place, at least initially, because it just does not make military sense. It is much easier to attack in the direction of Bezimenne — Talakivka ­— Volodarske with access to Berdyansk. Outflanking the city from the north will cut off supply routes and then the city will fall sooner or later.

K-300P Bastion-P mobile coastal defense missile systems are deployed in the north-eastern area of Crimea to prevent supplies of Mariupol by sea. However, in case of an attack towards Berdyansk, we should expect an attack from Crimea via Chongar as well. Otherwise, they will fail to gain control over the overland route to Crimea. Our sources from Sevastopol report about a call for the unplanned repair of several landing ships. This is an indirect sign of organization of preparation to possible support from the sea for breaching a land corridor.

Skeptics will argue that the ATO forces in the area of Starohnativka will not let outflank the city from the north. That is correct. However, these forces will experience difficulties with the attack group, which will attack Volnovakha from Olenivka (we wrote about transfer of large number of military equipment to Olenivka). Besides, Starohnativka will be tied by actions of battalion tactical groups based in Telmanove. That is why the Russian-terrorists forces have a chance to create a new pocket.

As at 21:00 (on the 29th October), while this summary was being prepared, terrorists started powerful preliminary bombardment in all directions we specified…

The summary was prepared by the military analyst of the InformNapalm team Artem Vasylenko and the coordinator, military journalist Roman Burko. Translated by Victoria Field and Aksana Dymchenko.