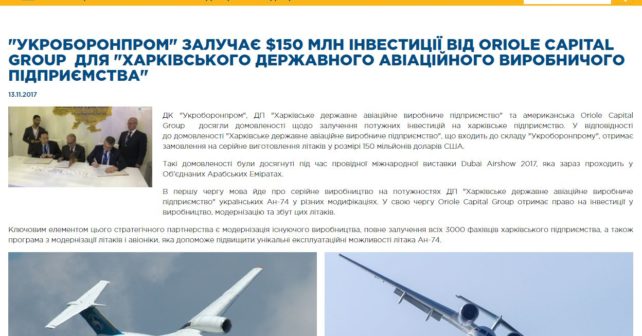 State defence industry association UkrOboronProm published a news story about a potential $150-million investment coming from the American company Oriole Capital Group into one of its enterprises. According to the agreement, the Kharkiv State Aircraft Manufacturing Company, will receive an order for a serial production of An-74 aircraft.

According to Roman Romanov, General Director of UkrOboronProm, this arrangement means that “For the first time, the aircraft manufacturing company of our country has a powerful international investor who plans to provide consistent investments over a number of years”.

The article refers to the representative of the American side Hossein Musavi, the CEO of the Oriole Capital Group. The company itself is described as “founded by executives from Wamar International, a diverse manufacturing and services company engaged in armored vehicle manufacturing, gas turbine manufacturing, and aviation optimization technologies, and Aero-Pioneer Group, an airborne logistics company that owns and operates aircraft in austere environments on behalf of large NGOs and international organizations”.

However, there is very little information on Oriole Capital Group on the Internet. It is mentioned for the first time in connection to the $150 million investment into the Kharkiv factory. 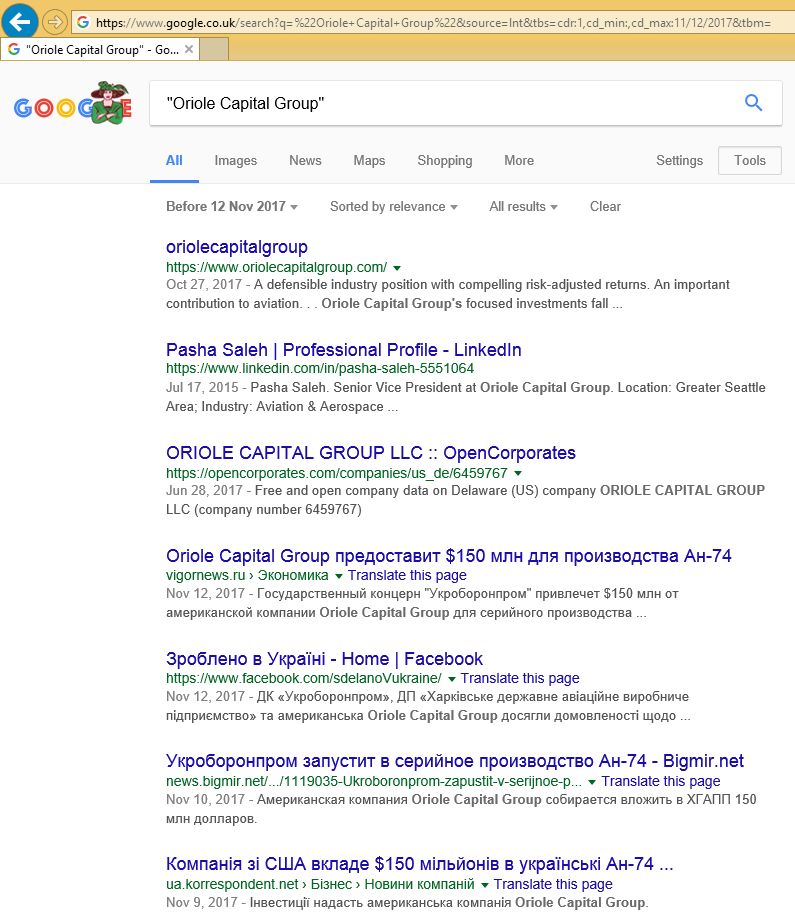 One of the first mentions about this company in this context appears in the investment climate quarterly report of UkraineInvest for the second quarter of 2017 (June 30, 2017), where this company is mentioned as one of the potential investors in the innovation sector. 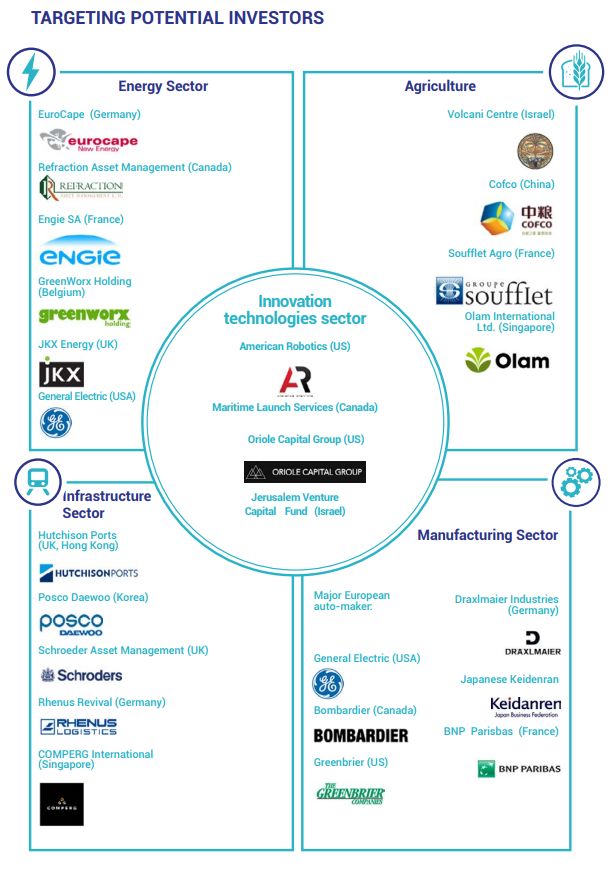 A company with the matching name, Oriole Capital Group LLC, was registered on June 28, 2017 under Delaware jurisdiction, i.e. in the US offshore zone. 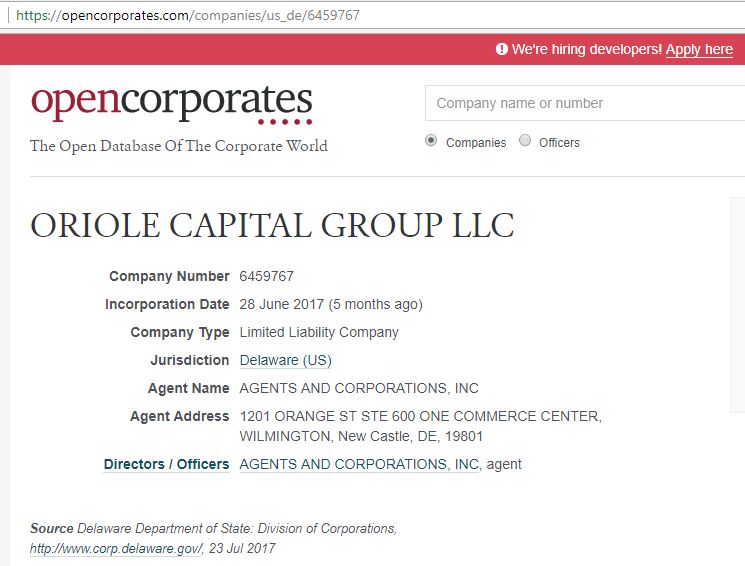 There is also a web site of a company with this name. The oriolecapitalgroup.com domain (web site archive) was registered on May 16, 2017 through GoDaddy. The data of the registrant was hidden through Domains By Proxy, the provider’s special service allowing to hide contact information of the domain owner.

There is no record of this site on Web Archive until November 13, when the news about the company’s investment in Ukraine was widely distributed for the first time [Ed.: however, the web administrator can remove the old pages of the site on special request].

Judging by the site code, design and content management, it was “powered by” Wix.com, an online service offering web site templates. The Investment firm template was slightly modified and supplemented with some aviation-related content.

It is interesting that the SSL certificate of this domain was issued just the day before the publication of the news on the UkrOboronProm website, on November 12.

The SSL certificate itself is valid until February 10, 2018. Which means, it is a free three-month certificate from Let’s Encrypt. It is possible to trace the history of the certificate renewal. It was first registered on May 16, on the day of the domain registration, and then renewed every three months. But the day before the news about the $150-million investment into the Ukrainian aircraft industry, the certificate was renewed once again. It is surprising, that such a wealthy company cannot afford a paid website certificate.

As for the content itself, it does not mention any names of executives or employees. Only the company headquarters address is listed as:

However, thousands of other companies can be found at this “Suite 203”, which means that it is just a mailbox for offshore companies. 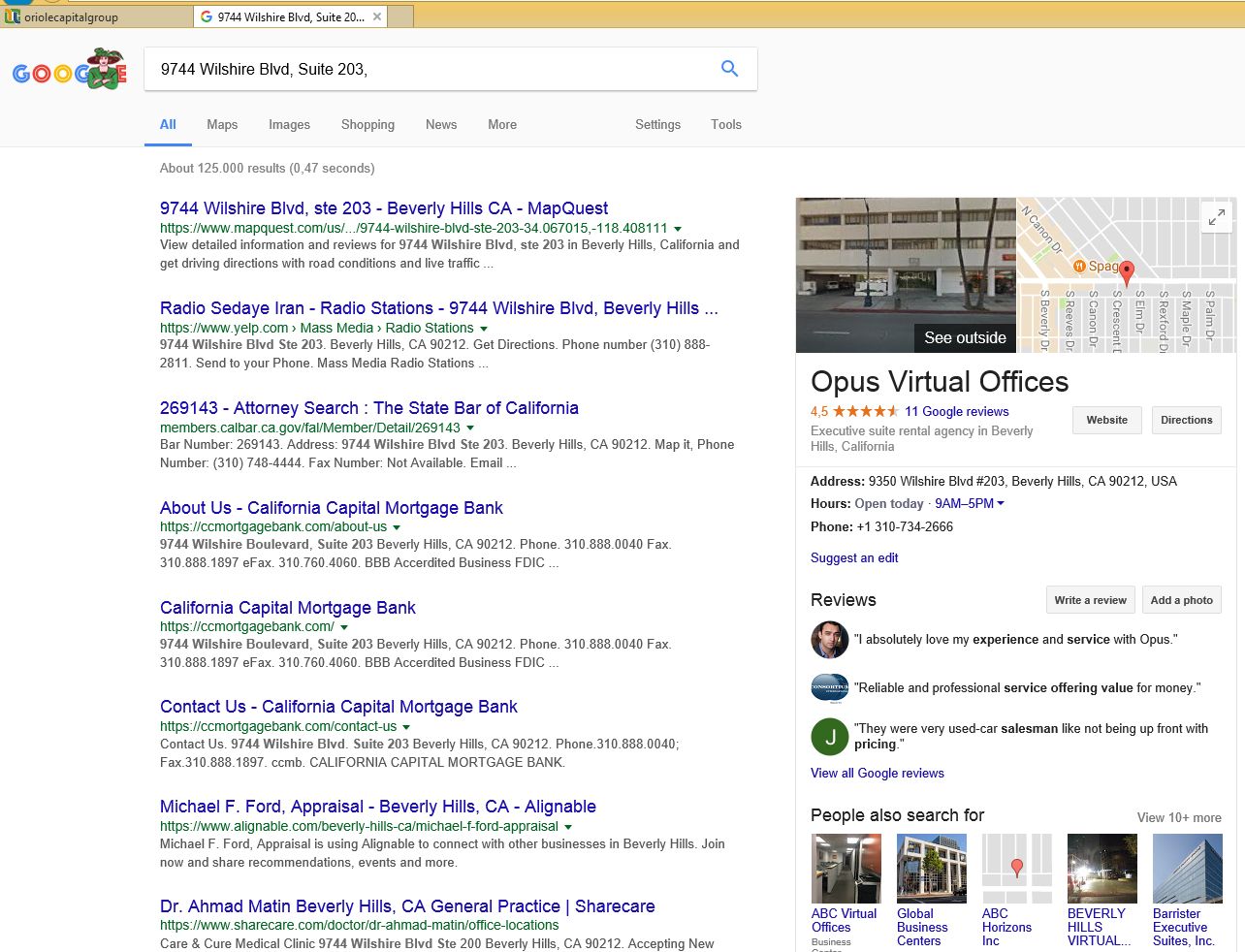 The parent company Wamar International, referred to in the article on the UkrOboronProm website, also does not appear to be the flagship of the aviation industry. The structure of registrants ([1], [2]) and press releases raise even more questions. What is the origin of the money and who is really behind this company? What does Hossein Mousavi have in common with investments in Ukrainian aircraft production? Who is Wamar’s registrant Nabil Barakat? What about Pasha Saleh, an Alaska Airlines pilot, calling himself “Senior Vice President at Oriole Capital Group”? Why do the names of American investors sound so Middle Eastern?

There have been episodes in Ukrainian history when multi-million-dollar contracts were signed by some Spanish ski instructors. Then they had to be chased around the world with an international wanted notice. Are we now witnessing an attempt by some murky American or Middle Eastern investors to carve a stake in Antonov? In Ukraine, anything is possible. However, in order not to answer uncomfortable questions later on, the state authorities should proactively inform themselves and the citizens of the beneficial owners of those “major” investors into Ukrainian state-owned enterprises.

This publication was prepared by Anton Pavlushko specially for InformNapalm.

No Responses to “Oriole Capital Group, a strange partner of the Ukrainian military-industrial complex”