Déjà vu – Russia declares another withdrawal of troops from Syria 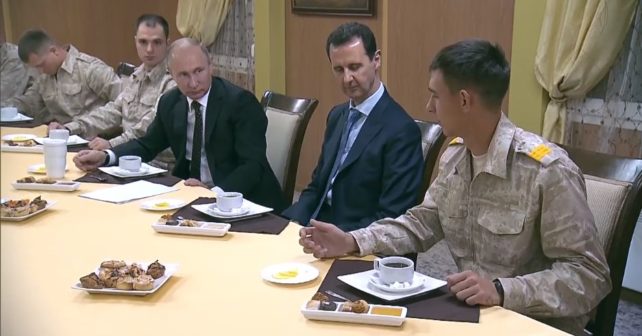 The presidential campaign of Vladimir Putin is well under way. Russian TV shows more and more staged reports about the president meeting with some factory workers or just grateful citizens. And on December 11, Putin paid an official visit to Syria. Under the sights of state-run television channels’ cameras, he reviewed the parade at the Khmeimim airbase and thanked the servicemen for their service. The media once again faithfully retransmitted his statements about the withdrawal of Russian troops from Syria, but you need to read carefully between the lines of these messages.

For example, the news headline on the official website of the Russian President says about the withdrawal of troops:

The Commander-in-Chief ordered the Defense Minister and the Chief of the General Staff to begin withdrawal of the Russian military group from Syria to their permanent bases.

However, the text below mentions only the military pilots in the context of withdrawal:

Vladimir Putin separately thanked the Russian military pilots who had to return to their homeland.

And in his speech, Putin hints that, in addition to the pilots, in Syria there were also:

It looks like, the Russian military is set to remain in Syria until Russia gets tired of funding and maintaining its military bases.

Timeline of Russia’s participation in the war in Syria

Let us remind you that Russia has been involved in the war in Syria since the first days, but persists in denying this: “Russian Foreign Minister Sergei Lavrov at the press conference in Moscow refuted information, that appeared in a number of media, that Russian special forces had arrived in Syria” (RBC , March 20, 2012).

June 25, 2012: “Russia does not have to justify itself for helicopters for Syria” (BBC)

Deliveries of weapons took place under the guise of previously signed contracts. But over the years the cover legend lost all credibility.

Ultimately, on September 30, 2015, Russia officially deployed its troops to Syria. However, Russia had been preparing for this since the beginning of the year, second-hand bulkers were purchased on the market to carry military cargoes.

Soon after the operation began, Putin signed a decree on the withdrawal of troops from Syria. On March 14, 2016, the Russian media wrote about this: “I believe that the task put before the defense ministry and Russian armed forces has, on the whole, been fulfilled. I am therefore ordering the defense minister, from tomorrow, to start the withdrawal of the main part of our military contingent from the Syrian Arab Republic’ – the head of state said at a meeting with Foreign Minister Sergei Lavrov and Defense Minister Sergei Shoygu.” 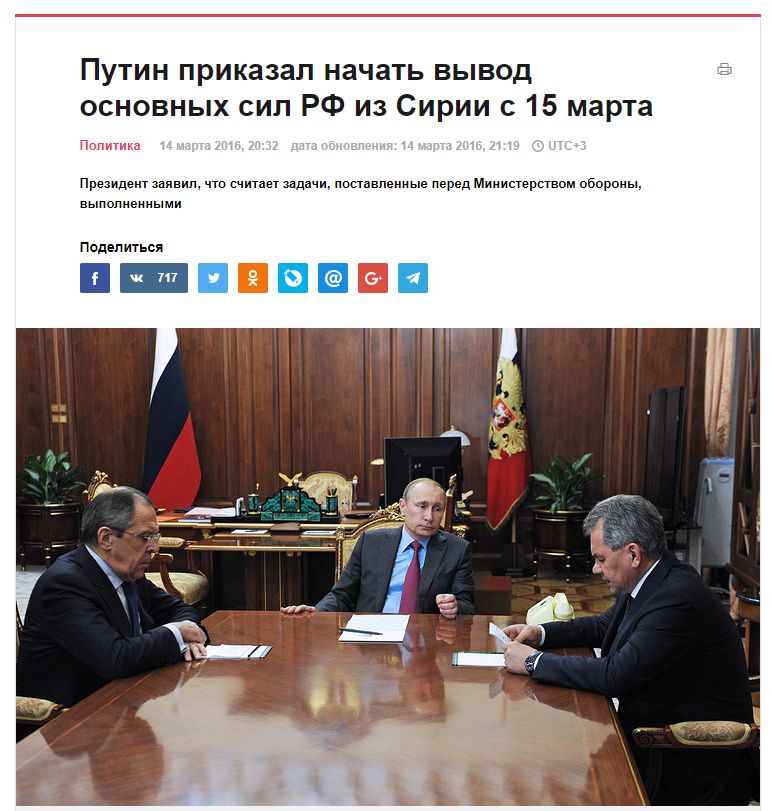 At the end of 2016, Shoygu at a meeting with Putin once again said that “necessary conditions have been created for the reduction of the Russian military presence on Syrian territory.”

Indeed, in January 2017, the Russian military began reporting on the gradual reduction of its force in Syria.

And in December 2017, Putin again declares about the next reduction of the Russian military force.

Historical parallels with the USSR

The Soviet Union began the war in Afghanistan in 1979, and in June 1980, the Politburo of the CPSU Central Committee decided to withdraw “some armored, missile and anti-aircraft missile units.”

Already in 1983, an eight-month program was developed to withdraw troops from Afghanistan. And in February 1986, Mikhail Gorbachev proposed a program for the withdrawal of troops at the 27th Congress of the CPSU.

But the actual withdrawal of Soviet troops began only in May 1988 and lasted until February 1989. A small victorious war stretched out for 10 years, and Syria starts to look like a sequel for the Russians.

This publication was prepared by Anton Pavlushko specially for InformNapalm.
(Creative Commons — Attribution 4.0 International — CC BY 4.0)