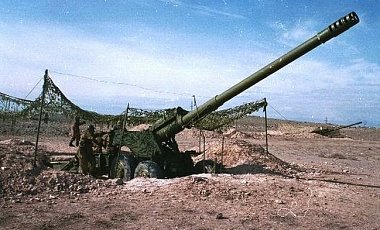 According to the report of the head of the Crimean media center of the Ukrainian Ministry of Defence on his page on Facebook, a column of Russian military equipment (5 trucks of “KAMAZ” type with boxes of ammunition on board, a few trucks of “GASEL” type) including large-caliber guns passes Kerch (the Crimea). Some equipment is clearly indicated as “military unit 64670”. Social network VKontakte contains a page, dedicated to this unit of the Russian Army. The following data is given there: military unit 64670, located in the Republic of Ingushetia (Russia), Sunzha district, village Trinity. Towed gun of caliber 152- mm refers to heavy artillery. It is designed to suppress and destroy manpower, firepower and combat materiel on the march, in the areas of high concentration and on bases. This morning an echelon with Russian military equipment passed Kerch and went in the deep of the peninsula. 14 “C-300” ( anti-aircraft missile system ), four APCs, 5 trucks of “KAMAZ” type, four trucks of the “URAL” type with hardtops, 4 tilt truck of “URAL” type are now on railway platforms. Military echelons equipped with systems of salvo fire “Uragan” and “Grad” are moving from Kerch to Djankoi now. Gun of type “Giatsint”.