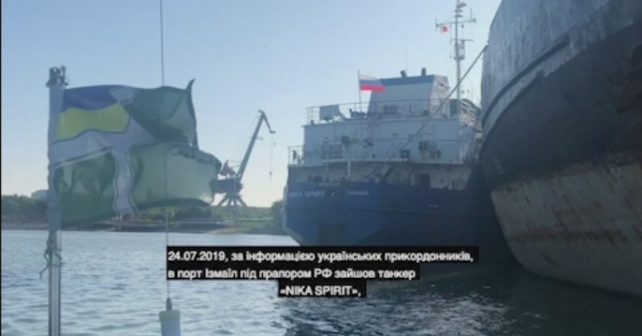 The Security Service of Ukraine (SSU) together with the Ukrainian Military Prosecutor’s Office (UMPO) have detained a Russian tanker “NEYMA,” which had been blocking the Ukrainian military ships in the Kerch Straight.

During a preliminary investigation it was revealed that representatives of the Border Patrol Service of the Federal Security Bureau (FSB) of the Russian Federation committed an act of armed aggression against the Ukrainian “Nikopol” and “Berdyansk” warships, and against the Ukrainian “Yany Kapu” tug boat in the Kerch Straight.

Acting against the norms of the international maritime law, the servicemen of the Border Patrol troops of the FSB RF have illegally, with the use of their weapons, blocked the movement of the Ukrainian warships during their passage through the Kerch-Enikalsk channel of the Kerch Straight with the help of a tanker “NEYMA” (IMO 8895528, MMSI 273347000, flag of the RF).These illegal actions helped the RF border control personnel to stop and cease the Ukrainian warships with 24 crew members in a violent fashion and under the threat of firearms.

The SSU investigators and their procedural guides from the UMPO have initiated and are conducting a pre-trial investigation of the fact of blocking of the Kerch-Enikalsk channel by the the “NEYMA” tanker.

Fifteen high-ranked servicemen from the top leadership of the RF military have been indicted in absentia, including one Rear Admiral, two Admirals, and one Lieutenant General.

According to the report of the Ukrainian border patrol servicemen, a tanker carrying an RF flag and the name “NIKA SPIRIT” has on July 24, 2019 entered the port of Izmail. It was identified by the international EQUASIS system as the above-mentioned tanker “NEYMA” with the IMO number 8895528, the ship that had been used to block the Kerch Straight.

The investigators have revealed that the name of the tanker had been changed from “NEYMA” to “NIKA SPIRIT” by its Russian owners in order to conceal the role of the ship in the illegal activities and in the act of aggression of November 25, 2018.

At this time, a team of SSU investigators, military prosecutors, and border patrol agents has finished the activities sanctioned by the Ukrainian court. These include a search aimed at establishing the factual circumstances of the incident, a confiscation of the relevant documents from the ship, such as audio tapes of the radio communication during the incident and routing onboard log books. The members of the crew have been interrogated and the documents needed for establishing the truth have been ceased.

The above-mentioned ship is qualified as a material evidence. An appeal to the court, asking to arrest the ship, is in preparation.

On the initiative of the UMPO, the National Council of Ukraine’s Security and Defense made a decision, signed into law by the President of Ukraine under the number 82/2019 on March 19, 2019 to be valid for 3 years, imposing special economic sanctions and other measures against the enterprise known as TOV YUVAS TRANS, namely, blocking the enterprise’s assets, limiting its trade transactions, preventing the import and forbidding the privatization of the state property etc. The TOV YUVAS TRANS was, prior to the moment of blocking of the Kerch-Enikalsk channel, the owner of the Kerch ship repair plant where the “NEYMA” tanker was stationed. Also, it performed the pilotage of sea-faring ships in the above-mentioned channel.

The Security Service of Ukraine

No Responses to “Security Service of Ukraine (SSU): Russian tanker NEYMA is detained in port of Izmail”