Russian Commander Sent to the LPR is Afraid of Assassination 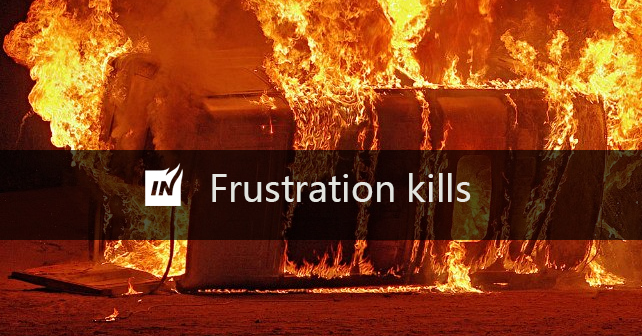 ­InformNapalm analysts recently obtained quite interesting information on one of the Russian officers. The information was provided by our sources inside of the so-called Luhansk People’s Republic (LPR). Additional video and photo materials would be required to prove the initial evidence. Because further investigation of the whole topic is very important, we would kindly ask our readers to share with us anything they might know about Russian Lieutenant Colonel Orlov.

Numerous crimes have been committed by Russian military servicemen in occupied Donbas. Often crimes are covered up because the official Kremlin’s position is “theyarenotthere” (it has already become an internet meme). Though, it is possible to get a pretty clear picture by gathering and putting together little peices of information coming from insiders in the occupied territories.

At the end of July 2016, Rostov district of the Russian military prosecution service opened a case against a Russian active duty officer who had been sent on “a business trip” to Ukrainian Donbas. He has been charged based on the following articles of the Russian Criminal Code: #335 Violations of the rules which regulate relationships between servicemen without subordination, #336 Insult of a serviceman, and #112 Deliberate infliction of moderate bodily injuries. This officer is Yevgeniy Vladimirovich Orlov, born in 1985, an officer of the Russian military Forces with the rank of lieutenant colonel. He was accused of the beating that resulted in multiple injuries of one of his subordinates who complained to the military prosecution service after the incident. It’s quite possible that punishment for Orlov can be a mere call to a disciplinary commission and a “severe reprimand” or “incomplete professional conformity”.

Our source informed us that Yevgeniy V. Orlov (call sign Orel) has arrived in the LPR to lead a special reconnaissance battalion (military unit #L55055, Luhansk) of “the 2nd LPR Army Corp of the People’s Militia”. 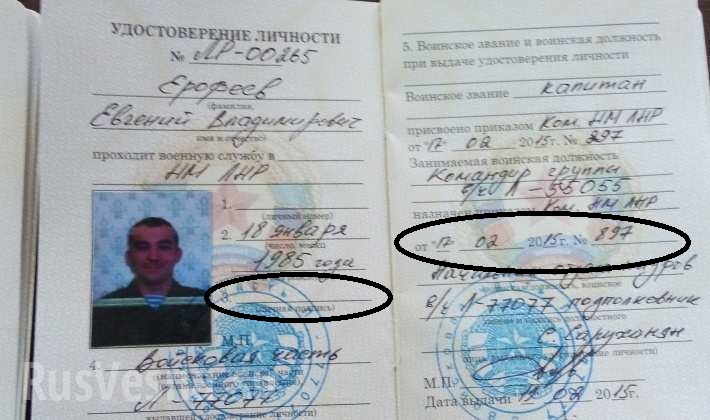 We want to remind you about the captured Russian special operations servicemen – Captain Yerofeev and Sergeant Aleksandrov. A few days after their capture, the LPR militants presented photos of their fake IDs according to which they were “members of the LPR people’s militia” (military unit #L55055, Luhansk). Then experts quickly uncovered the forgery pointing out the errors and inaccuracies in the documents.

­Additional investigation established that Orlov graduated from the Novosibirsk Military Command Academy, majoring in military intelligence units activities. He is married, has a child.

His father is a Russian army general. Orlov-junior has arrived in the LPR as a part of a plan to enroll in the Russian Military Academy of the General Staff of the Armed Forces. Potential students and those officers who would like to be promoted are required to participate in military actions. The currently occupied and controlled by Russia LPR and DPR (so-called Donetsk People’s Republic) serve as a perfect opportunity.  So, Lieutenant Colonel Orlov, dreaming about a general rank, decided to join fighters for “the Russian World”.

The insiders also provided information about the psychological profile of Orlov-junior: “He demonstrates vengeful characteristics and could be considered a coward, and vindictive individual. He tries to escape any dangerous situations while serving. Neither subordinates, nor colleagues have any respect for him. Many of his subordinates have been forced to leave or get transferred to other units.”

Witnesses pointed out that lately Orlov has been experiencing panic attacks after the death of his close friend Colonel Aleksander Bushuev (call sign Zarya). Like Orlov, Bushuev was a Russian active duty officer sent to lead the 7th Brigade of “the LPR Army Corp of the People’s Militia”. On July 3, 2016, he was blown up in a car. That assassination had changed Orlov’s behavior: he fell into depression and started binge drinking. He became unpredictable. He started beating and abusing his subordinates. Finally, one of his victims became brave enough to report the crime to a military prosecutor. Most likely, a single complaint will not prevent future abuse of other soldiers. Considering that the presence of Russian servicemen in the LPR/DPR is illegal and not admitted by the Kremlin, then another possible car explosion with a Russian lieutenant colonel in it in the occupied Donbas might go unnoticed in Moscow.

Another reminder: on August 6, 2016, an assassination attempt against Igor Plotnitsky, a puppet LPR leader, occurred. His vehicle was blown up. Exploding cars of leaders and militant commanders have became a common practice of internal cleansing in the fight for spheres of influence between the Russian Federal Intelligence Service (FSB) and the Main Intelligence Directorate (GRU). Each of these groups has its economic interests and aspirations to control financial resources, which can be seen in the placing of the “proper figures” in the appropriate positions or the “replacement” of the competitors’ figures.

Information was collected and delivered by the insiders specially for the further publication on the InformNapalm international volunteer community website.