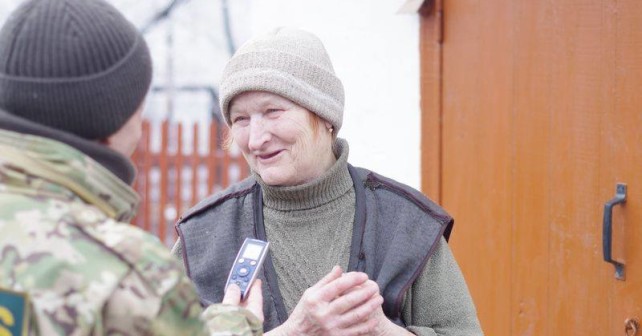 We were driving to that village to write an article about the National Guard servicemen, but the check point commander listened to our request and unexpectedly said: “You better tell a story about a local woman. She is a stationmaster. She helps us like the most restless and active volunteers do. Her name is Halyna Panasivna, but we call her simply Grandma Halya. She works at the railroad. She has worked at the nearby railway station her whole life.”

‘Take us to her,” – we were sincerely surprised to hear about such a patriotic resident, because we had heard different stories about  pro-Russian minded locals.

Halyna Panasìvna’s modest farmhouse surprised us with the exceptional order and cleanness of the yard. A smiling woman came out to meet us.

“What are you going to write about me? You should write about them,” she said pointing at the National Guard servicemen in the yard of her house. ‘They are the real heroes and the real men!”

“But it’s they who asked us to write about you,” – we replied.

“Did they?” – asked Grandma Halya. “Well, then I can’t refuse. Ask your questions!”

“How did it happen that you basically gave away your house to the fighters from the National Guard to stay in it?”

“The guys have been staying in my house since fall. As you can see, the house is not very big, but I couldn’t leave them to live outdoors. The tents and trenches are not as comfortable as a warm house!”

“And how do you live together?”

“We live well. They help me with everything: on the farm and with a kind word. And I try to help the guys, as much as I can. I help to cook, to clean, to do laundry. By the way, you don’t believe me, but they know how to cook even better than me!

“Though, for Christmas holidays, they asked me to cook kutia [editor’s note: a traditional sweet grain pudding]. I made a large pot of it according to all the rules: with honey, poppy seeds,  and nuts. We celebrated Christmas together, and New Year too.

“It’s easier for the boys to live in the house. I have a lot of pots and pans. I told them they didn’t need to spend their own money to buy all of it, they could use mine.

“Yesterday, those separatists, while shooting here, damaged a pipeline in a nearby village, so many villages were left without natural gas. So, the guys came up and said: “Grandma Halya, you are not going to be hungry!” They lit a fire and cooked everything. They are men of gold!

We said: “Halyna Panasivna, many locals have fled to other parts of Ukraine, and those who have remained, as we were told, sometimes are even hostile to our army…”

“Oh, guys, this is war, a real war… This is very bad. We lived here without Russians just fine:  Western Ukraine, and Eastern… Now, these “neighbors” have come down on us. Who needs them here?

“You know, I remember the second world war. I was a little girl then. Today, the Russians have come here like the Nazis in 1941. Although, the Germans sometimes were even more humane than the terrorists. Now, the whole country must resist them” hand in hand”! We need peace, we need help from the world. Let the Russians live by themselves like they want, but without us.”

“Are you going to miss the guys whom you have provided with a roof above their heads when it’s all over?”

“Of course, I am going to miss them! You know, the guys that stayed here in the first rotation left for [the town of] Severodonetsk. But recently, I looked and saw them coming to greet me. It turned out, they were going home and came over to visit me. I remembered every one of them. It was so nice to see them!

“You know, I’ve seen a lot in my life and I can tell you: there are good men in Ukraine, they are   real defenders, they are kind and sensitive.

“On New Year’s day, just imagine it, our Guardsmen put together and brought to a local school presents for every child. Whatever they got from their own families and volunteers, they gave to the children.

“As I watched it, my eyes were full of tears. I thought: how is it so? These men have two or three children of their own, and they are here to protect the country, to help the locals, and even to give gifts to somebody else’s children.

“Lord, we just need freedom, and with such men we will rebuild the country, trust me!” 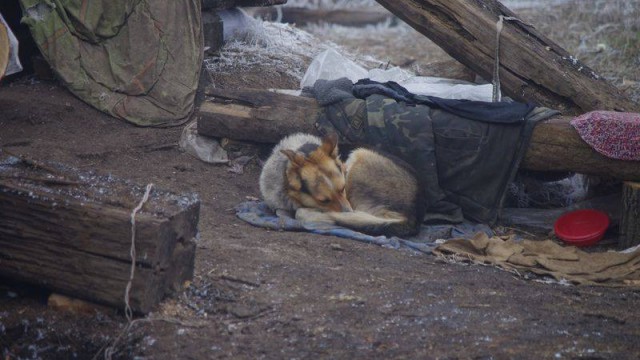 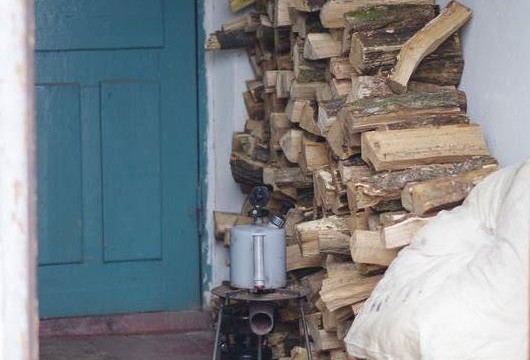