State Security Service of Ukraine (SBU): Militants Are Looking for the Ways to Quit 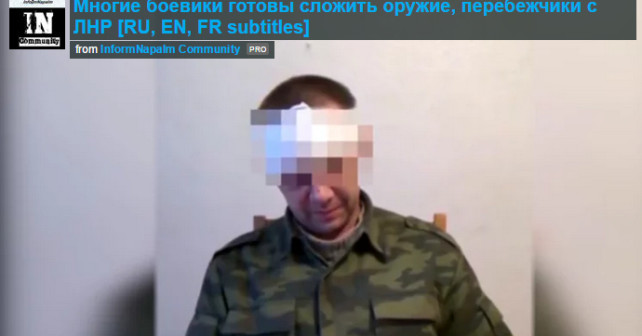 Many terrorists in illegal armed groups are ready to lay down their weapons and move to the territory controlled by Ukraine. They are now looking for the ways to do this according to the State Security Service of Ukraine (SBU), quoting two terrorists who were captured recently. These ‘defectors’ escaped from their dons and were looking for protection. They surrendered to Ukrainian servicemen on a block-post in Luhansk oblast.

While doing a background check SBU investigators have found criminal history of both escapees, a situation which is quite usual for the militants of the so-called ‘Army of South-East’. 26 y.o. resident of the town of Bryanka was sentenced for theft twice. 46 y.o. resident of Sverdlovsk, Luhansk oblast, served 11 years in jail for a willful murder.

The older militant confirmed being taught by Russian instructors in Yeysk, Krasnodar Krai, Russian Federation. Regular officers of the Russian army trained him to use complex military equipment. In ten days he obtained the qualification of the operating commander of Strela-10M ground-to-air anti-aircraft missile system. Such GTAMs were supplied to the terrorists by the Russian government.

Detainees also told about the humiliation and beatings by the leaders of the illegal armed groups. To punish one of the former militants for any fault, the ‘drunk soldiers and commanders’ beat him for a day and a half and then made him spent a night in a metal cage.

SBU reminds those hesitating to leave the criminal gangs of ‘Novorossiya’, that according to Article 258-3 of the Criminal Code of Ukraine: a person who willingly informed authorities of the terrorist activities it was participating in and facilitated termination of these crimes, is exempt from criminal liability if it was not involved in other crimes.

One Response to “State Security Service of Ukraine (SBU): Militants Are Looking for the Ways to Quit”