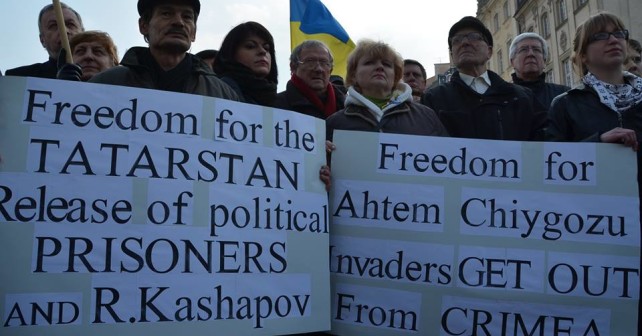 Dmitry Berezhkov, former vice-president of the Association of Indigenous Peoples of the North, Siberia and the Russian Far East (Tromso, Norway)

On December 28, 2014, the Federal Security Service (FSB) of the Russian Federation detained the Head of the Tatar Public Center Rafis Kashapov in Naberezhnye Chelny, Tatarstan. From January 19 to February 6 Rafis Kashapov was on a hunger strike.

Kashapov was charged with violation of Article 282, Paragraph 1 of the Criminal Code of the Russian Federation (Incitement of National, Racial or Religious Enmity) for publishing a series of posts in the social networks that criticized the activity of the Russian government in Crimea and Donbas. These are the image “Where Russia [is], there are tears and death” published on July 6, and texts “[Let us] Defend Ukraine and the Whole Turkic World!” (November 23), “Yesterday [there was] Hitler and Danzig, today [there is] Putin and Donetsk!” (November 26), and “Crimea and Ukraine Will Be Free from the Invaders!” (December 1).

The experts of the Information and Analysis Center Sova, Russian human rights organization, declared that “there are no signs of incitement of hatred on the national basis in those materials” and pointed out to numerous procedural violations in Kashapov’s criminal prosecution. Amnesty International published a call for immediate release of Rafis Kashapov.

Unfortunately, the illegal detention of Rafis Kashapov is not a single incident but rather a part of the systematic policy of the current Russian government. During the past year, the courts convicted several other activists of the national movements from the indigenous communities of the Russian Federation.

In particular, in 2014 they condemned President of the Assembly of Peoples of the Caucasus Ruslan Kutaev, Chairman of Milli Mejlis of the Kazan Tatars Fauzia Bairamova, Circassian activist Andzor Akhokhov, Editor-in-Chief of the Chuvash newspaper named ‘Vzyatka’ [the Bribe] Eduard Mochalov. Deputy Chairman of the Executive Committee of The World Qoroltai of the Bashkirs Fanzil Akhmetshin and Chairman of the Organizing Committee of the Congress of the Ingush people Iles Tatiev continue to serve their prison terms.

There are Kuban, Kaliningrad, and Don regionalists, Crimean Tatar activists and Ukrainian activists of Crimea in detention as well.

The circumstances of each of those cases leave no doubt that the persecution of these individuals is related to their activism. Persecution of some other activists continues. More information on these cases can be found in the reference attached to this Statement.

We demand to stop the persecution of activists of the national movements of the peoples of Russia and to ensure immediate release of the political prisoners Rafis Kashapov, Fanzil Akhmetshin, Ruslan Kutaev, and Iles Tatiev.

We also call on international organizations to pay attention to the above-mentioned cases of persecution of activists and facilitate the release of the political prisoners.

Fanzil Akhmetshin was detained on November 29, 2011 at the airport in the city of Ufa, when he returned from a trip with the Bashkir humanitarian mission to help African refugees. Allegedly, drugs were found in his luggage, but before arriving to Ufa Mr. Akhmetshin passed the aviation security checks in several international airports. On March 28, 2013, the politician was sentenced to four years and six months and the “incitement of a religious hatred” was added to the charges against him.

Persecution of Bairamova, Kashapov, and Mochalov is evidently related to their activism. The cases of Akhokhov, Kutaev, Akhmetshin, and Tatiev are linked to their participation in the national movements of the indigenous communities. Yet these activists are charged criminally for other alleged activities with evidence apparently fabricated.