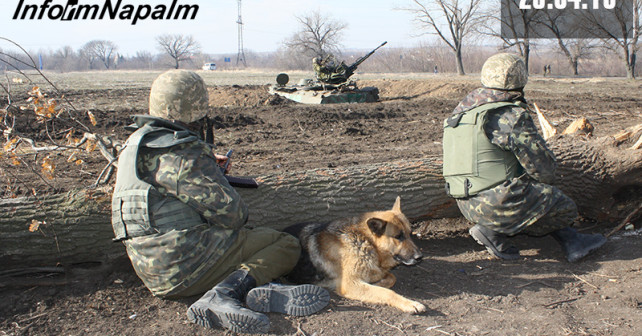 Over the last 24 hours, active hostilities continued in the area of Peski – Avdiivka – Opytne – the Butovka mine. Small arms and automatic grenade launchers were used by both sides. The militants also used heavy artillery and tanks.

08:30 – Kirovskyi district – several explosions and small arms fire were heard from the direction of Peski.

15:20 – 5 trucks with generators and field kitchens passed along Ilyich Avenue toward Makiivka. Military KAMAZ and Ural trucks started active movement in different directions during the second half of the day. At 16:00, a convoy of 10 covered Ural trucks went from the direction of Makiivka westward. They moved slowly, apparently they were overloaded. The trucks were escorted by the militants’ cars. Several minutes later, 6 more KAMAZ trucks went in the same direction westward.

17:00 – The same convoy that was spotted in the morning, 2 trucks and 3 APCs, passed on Tkachenko Street and Leninskyi Avenue toward the Zolotoe Koltso shopping center. We notice that this movement repeats daily.

17:44 – Several outgoing rounds of a self propelled gun were heard from the area of Tochmash factory. A strong explosion occurred at 18:30 in the area of Putilovka or the airport. A plume of smoke appeared in the area of Spartak. Witnesses claim that they heard sporadic booms similar to ammunition explosions 15 minutes after the first explosion.

At approximately 20:00, civilians from Avdiivka reported serious clashes in the area of Peski – Opytne. Tanks, small arms, machine guns, and artillery were involved. The fighting was over by 21:20.

Periodic firefgihts occurred in Donetsk between 21:30 and midnight.

21:30 – loud shots and many tracers in Kyivskyi district;

21:31 – militants shot at a UAV for 30 minutes in the area of the roofed market, tracers going into the sky were seen near the bus station;

22:40 – massive explosions from the direction of the airport;

23:40 – in the area of the Topaz factory continuous shooting with tracers in the direction of the airport;

The intensity of the traffic did not increase in this sector, the militants’ trucks move in small groups of one or two vehicles. But the movement is regular. Its directions are eastward and toward Torez and Donetsk.

Civilians observed the following equipment during the day at the Motodrom: one GAZ-66, two ZIL-131 with 2 antennas near each vehicle, two covered KAMAZ trucks and one BMP IFV.

The night before there was an interesting incident observed by local civilians in the café ‘Artsakh’ in the downtown. Militants drinking there put up a fight with shooting. As a result, two of them and a girl were killed. The café closed immediately and all circumstances of the accident were classified. The funeral of the girl was on April 27.

The checkpoint between Horlivka and Yenakiieve is being dismantled very quickly, community services are involved. At the same time there was a lot of military equipment parked this morning on the canal road in the area of Bessarabka. At 15:00, a military tanker truck came to the area of the restaurant “Barnsli” where the militants keep their vehicles.

The militants actively used heavy artillery between 19:40 and 21:00. Tank activity was observed in the area of the Holmivskyi village near the cemetery.

New checkpoints have appeared. Local civilians mark an even greater increase in the number of militants who settle in abandoned houses left by the residents of the village. They choose the best ones and pillage all metal parts from damaged and destroyed houses.

Militants performed mortar shelling of the Troitske village at 05:00. Approximately five mortar shots were fired from the direction of the Kalinovo village occupied by militants. Mines exploded near the village administration building, fortunately, no one was hurt. Shelling happened also in the Krymske village (near the TB clinic) and Stanytsia Luhanska, small arms were used. The militants shot an ATGM rocket at Trokhizbenka village but they did not hit the Ukrainian Army positions.

In the village of Krasnyi Yar opposite Stanytiaa Luhanska across the Siversky Donets river, the militants are removing all irrigation systems for scrap metal. They excavate the large diameter pipes using military equipment and take them in an unknown direction. Militants, who could not find their way in the area were spotted in the city of Kirovsk. They asked local civilians how to get to the Donetskyi village, and they moved by cars and an ambulance type vehicle.

The city was shelled from occupied territories at 18:25. The shells hit residential buildings (Gagarina St, 10A), and several buildings were hit by shrapnel. A transformer unit on Pryozerna Street caught fire. A shell fell in the territory of a kindergarten.

A convoy of vehicles comprising 7 BMP IFVs and 2 trucks with mounted AA guns passed through the village.

5 KAMAZ trucks with armed militants passed between 16:00 and 18:00 from the direction of Perevalsk to the road leading to Luhansk. Also, several KAMAZ trucks with painted over license plates arrived there. Terrorists use them for ammunition deliveries.

A convoy of vehicles comprising 3 self propelled guns and 5 covered Ural trucks passed at 19:20 on Lenin St. They moved very slowly, with their head lights on.

Militants started shooting at ATO positions with small arms at 05:45. Later, at 07:00, shelling by 82 and 120 mm mortars resumed. Shelling by tanks started at 07:10. After successful counter fire by ATO mortars, DNR representatives requested ceasefire at 07:46.

Active firefights from the direction of Shyrokyne were heard in Mariupol between 15:00 and 20:00. In Shyrokyne, artillery shelling from the militants’ side continued at 16:20. Guns of a caliber larger than 100 mm were used.

Starting at 17:17 , thick black smoke stretched from Shyrokyne almost to the Lebedynske village. The explosions were heard until 21:00, then it became quiet.

SUMMARY:
Over the last 24 hours, the militants continued active shelling of Ukrainian servicemen and civilians on liberated territories. They used not only small arms, but also MLRS and artillery systems and mortars of calibers forbidden by the Minsk Agreements. At the same time, the militants continue building up their strength and delivering ammunition to the territory controlled by them.

(с) This material was prepared exclusively for InformNapalm, a reference to the source is required when using the information.