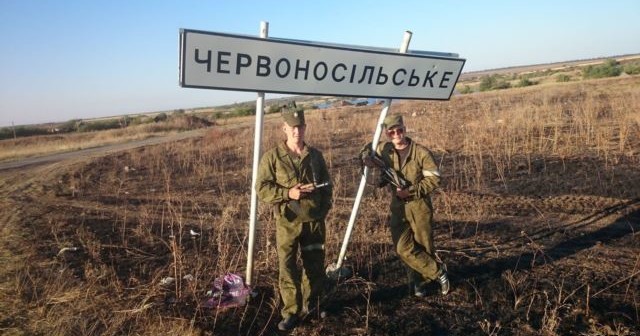 By Dmitry Volchek and Claire Bigg

Since conflict broke out in eastern Ukraine a year ago, Russia has adamantly denied any involvement in the bloody standoff pitting Ukrainian government forces against separatist rebels.

President Vladimir Putin has dismissed as “nonsense” claims that Russia is fomenting unrest in the region by sending soldiers to back the insurgents.

In Ukraine, however, a motley crew of investigative bloggers is hard at work to debunk what they denounce as a brazen Kremlin lie.

“The official stance of people in Russia is: ‘We’re not there but we’ll be victorious,'” says blogger Anton Pavlushko. “The task of Ukrainian bloggers is to prove there are Russians in Ukraine.”

By Russians, Pavlushko means Russian soldiers — not volunteers or soldiers on leave, as Moscow has portrayed them, but bona fide Russian servicemen on active duty.

Pavlushko, a mathematician by education, works as an IT specialist.

In his free time, he trawls through Russian-language social-networking sites such as Vkontakte or Odnoklassniki, searching for evidence of Russian soldiers in Ukraine.

“This takes a lot of time — it probably takes a big chunk of one’s life,” he says. “Sometimes you need to study profiles for hours. Sometimes you spend months tracing a soldier and following his activities. But it’s all worth it.”

Despite Moscow’s insistence it has no troops in Ukraine, evidence of Russian involvement is mounting.

In March, NATO Deputy Secretary-General Alexander Vershbow told a conference in Latvia that “Russian leaders are less and less able to conceal the fact that Russian soldiers are fighting, and dying, in large numbers in eastern Ukraine.”

And Washington think tank Atlantic Council this week issued a report citing“irrefutable evidence” that the conflict in eastern Ukraine is “a Kremlin-manufactured war — fueled by Russian-made military equipment, fought by Russian soldiers, and supported by Mr. Putin.”

Pavlushko says Russian soldiers often leave a trail of photos and comments documenting their stay in eastern Ukraine, where the conflict has killed more than 6,000 people since April 2014.

This carelessness has allowed digital activists to track down dozens of Russian servicemen, shed light on their activities in Ukraine, and identify their unit and military equipment, he adds.

Among the purported Russian soldiers exposed by Pavlushko is Ilfat Mubarakzyanov, apparently a member of the 23rd Guards Motor Rifle Brigade.

Mubarakzyanov appears to have taken numerous snapshots while in Ukraine, including pictures in which he can be seen posing with a rifle outside a Ukrainian grocery shop, a Ukrainian electronics shop, and the entrance sign to the eastern Ukrainian city of Krasnodon.

“Some of the pictures of this person show him as an enlisted soldier in the Russian army,” says Pavlushko. “Then you see a series of photos from Krasnodon. He takes pictures of everything, literally of every Ukrainian signs he sees. Then you see him again in the Russian army. So this raises the question: In what capacity was this person in Ukraine?”

Pavlushko and his fellow bloggers also helped identify two alleged Russian servicemen captured earlier this month in Shchastya, a government-controlled town near the rebel stronghold of Luhansk, in eastern Ukraine.

Ukrainian authorities have said the two men, named as Aleksander Aleksandrov and Yevgeny Yerofeyev, will be tried on terrorism charges.

If convicted, they could reportedly face life in prison.

In a YouTube video published by Ukrainian lawmaker Anton Gerashchenko, Aleksandrov admits serving in the Third Brigade of Russian special forces, based in the central Russian city of Tolyatti.

Speaking to interrogators from a hospital bed, he says he was deployed in March to fight Ukrainian troops and names other men from his unit.

Russia’s Defense Ministry denies the claims, saying Aleksandrov and Yerofeyev have served in the military but were not enlisted at the time of their detention.

While the capture is a major coup for Ukrainian authorities, Pavlushko says Kyiv has done far too little to prove to the world that Russia is actively backing militants in eastern Ukraine.

Pavlushko estimates that tens of thousands of servicemen could have been dispatched to Ukraine over the past year — a guess based on official Ukrainian figures according which 50,000 people have taken part so far in Ukraine’s “anti-terrorism” operation in the east.

The vast majority of Russian soldiers thought to be fighting in eastern Ukraine will most likely remain unidentified.

Nonetheless, Pavlushko firmly believes that even the handful of cases uncovered by Ukrainian bloggers will help his country hold Russia to account when the time comes.

“Later, when the war is over, when Putin’s regime ends and perhaps someone more liberal succeeds him, all of this will have to be answered for, each one of these picture taken in Ukraine,” he says. “And no one will be able to say that Russia wasn’t there.”