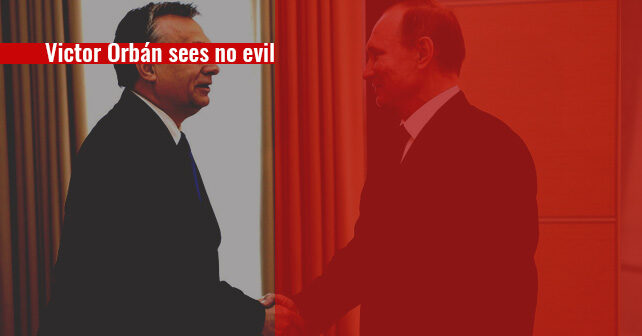 Following russian invasion of Ukraine even the most pragmatic and cautious EU leaders have come to terms with the fact that democracy, freedom, respect of life and human rights – the very basic principles on which their societies are built on should prevail over prices of petrol and gas. Still, there is someone among them who thinks otherwise.

Last month Prime minister of Hungary Mr. Viktor Orbán was listed as a supporter of russian invasion to Ukraine in the MYROTVORETS database, which is Ukrainian Center for Research of Signs of Crimes against the National Security. While MYROTVORETS is the NGO and it can’t officially represent Ukrainian political stance, it was still an important proclamation that shows the current mood in Ukraine-Hungary relationship. It concluded that after numerous efforts by Orbán to obstruct diplomatic and military aid to Ukraine, continuous declarations, which mirror russian propaganda as well as stubborn and unjustified refusal to sanction russia by Orbán’s government – Ukraine has all the rights for suspecting Mr. Orbán to be very cooperative with russian foreign policy, to say the least.

Following this decision many people around the world may wonder what the use of such a step is and whether it is appropriate at all to accuse the leader of another nation for his unwillingness to provide aid. Even more so, Victor Orban constantly emphasizes that his choices for not providing and even impending appropriate help to Ukraine were made in the name of the Hungarian people. Paraphrasing him: they are not part of this war and as such should not suffer any form of consequences because of it.

Indeed, based on the principles of international affairs where most things are determined by benefits and gains, you cannot simply expect another nation to bear part of your own hardship and difficulties just out of goodwill. And like any other politician who has made his career through populism and manipulations of social opinion Mr. Orbán has very skillfully mastered his expertise – every questionable decision to directly or indirectly support russia on the international stage can be justified by ending it with the phrase “for the Hungarian people”. 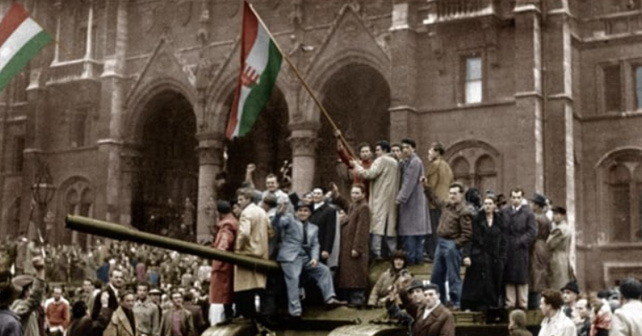 While those statements sound as patriotic as they may, upon closer look, however, many of such political resolutions and declarations raise a lot of questions and call for fact checking. For starters, at the beginning of the war Viktor Orbán had prohibited not only any form of military aid to Ukraine but even military aid of other countries to have their logistic ways pass through Hungary. It was explained as a precaution of Hungary territory being targeted by russian missiles. Simple logical reasoning, though, can show that in case russia would be insane enough to attack a NATO country, they will firstly do it against much closer Poland, Estonia, Latvia, Lithuania, who have both courage and resolution to stand against unprovoked aggression despite their close proximity to russia. In this apocalyptic scenario it wouldn’t matter what help Hungary provided or didn’t to Ukraine, since it will be involved in any case as a NATO member.

Another and obviously most important argument for Orbán’s strangely friendly behavior towards world condemned russia is that Hungary needs russian cheap oil and gas “to not freeze in the winter” and “to fuel economy”. Such dependence on the energy resources of a single supplier proved to be a dangerous policy. Especially if the supplying country is russia – incredibly unreliable and unpredictable partner, which has zero respect for the international laws and agreements. More than possible scenario in which putin can shut down the energy pipe whenever he wants and as Orbán says – “devastate the economy of country” effectively means that Hungary is already in position of certain vassal dependence from russia. And instead of looking for alternative or at least extra sources of import to guarantee energy security, like the rest of Europe is now doing, Orbán is trying to please the tyrant, which has never had a good ending. Recent veto by Hungary on the oil embargo only further proves that there is something really wrong with either – economic system of the country or political will by government, because while Hungary is only average consumer of russian energy resources in EU, it is the only country that declares its categorial inability for gradual transition to other suppliers.

Overall current pro-russian policy by Orbán is very dubious because it is simply not worth for Hungary to antagonize the rest of Europe, Ukraine, US and democratic world for the sake of crazed totalitarian russia. From any long-term perspective: economic, political, national image – it will bring enormous harm and little profit to the Hungarian national interests that mister Orbán speaks so much about.

The list of those inconsistencies can go on further – with more in-depth analysis, real data, digits and statistics. But before debating on any of those profit-based topics, it is necessary to address something more fundamental than this year’s GDP and scarier than a possible period of recession due transition to other oil and gas suppliers. 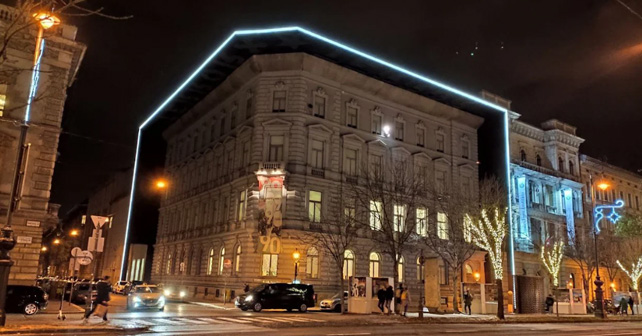 House of Terror is a museum located on Andrássy street in Budapest. It is set up to commemorate victims of fascist and communist regimes in 20th-century Hungary. As the self-explanatory name implies, it contains testaments of what those two regimes have brought to the country – terror! Most incomprehensible thing is that this museum was initiated under government of Victor Orbán – the same Orbán who calls today’s russia a strategic partner, and the same Orbán who hinders joint EU efforts to stop the ongoing war. A devastative, bloody, cruel war against neighboring peace-loving country.

Just think about it! Modern russia for several decades has been glorifying soviet regime and its war crimes. They openly declared aspirations for the restoration of Soviet Empire through the invasions of neighboring countries. And now it’s pretty much obvious that russia has inherited and already adopted many distinguishing traits of both fascist and communist regimes, like war propaganda, cult of the leader, total censorship, militarism, forcible suppression of opposition, ideology based on the hatred for the external “enemies”, and, of course, repressions and terror as the main pillars for own sustainment.

The worst thing about those disgusting regimes is that they can’t be confined within borders of the states that gave them birth. They will always expand and bring terror and misery to their weaker neighbors and whomever they can reach until someone else will stop them. This is exactly what is happening now in Ukraine. By starting biggest European war since World War II russia has brought back to the Europe all that terror, cruelty and devastation that has so deeply harmed millions of people worldwide in previous century.

Terror of being indiscriminately killed by missile, artillery shell or aerial bomb. Terror of your city being invaded, your freedom stripped, your home ruined, and your belongings robbed. Terror of being deprived of basic necessities like water, food, shelter or medicine. Terror of your kids being kidnapped and deported to far away hostile lands. Terror of being subjected to any possible kind of atrocity including raping, torturing and arbitrary executions. Terror of never seeing your family member again…

And as if it was not enough to satisfy russian inhuman regime, all those horrendous and unthinkable war crimes are accompanied by blatant and abominable lies. In the russian mass media and their official statements they accuse Ukrainians of massacring their own families and shelling their own homes, destroying schools where their kids were studying and hospitals where their relatives were staying.

Russian propagandists are constantly putting efforts to rob even the dead of their right to find final justice. They portray civilian building as military bases, innocent victims as crazy nazis. Effectively, after killing Ukrainian people russian occupiers by the means of propaganda are trying to deny the whole lives of their victims by saying: “if they die by our weapons – it means they are fascists”. This sums up the extent of their justification for this war, which they repeat every time after shelling hospitals, schools, railway stations, residential buildings, churches, theaters.

Fortunately, no one in the world believes russian propaganda anymore. Well, no one except such dictators as Alexander Lukashenko, Isaias Afwerki, Kim Jong-un, Bashar al-Assad and unexpectedly… Prime minister of Hungary Viktor Orbán. According to many sources it was the latter who tried to adopt russian rhetoric about Bucha massacre being a put-up affair but didn’t have courage to arrive on site and confirm it first-hand. Just let’s imagine what would Hungarians feel if they were told that those horrendous, tragic events that they had experienced during communist reign in the previous century were faked, blown out of proportion or need more proof to be valid. The answer is simple – it is utterly offending and immoral. This is how Ukrainians feel about Hungarian Prime Minister, who never ceased to present his indifference to the growing death toll in Ukraine as some diplomatic win. For instance – on how Hungarians can exclusively enjoy stable petrol and gas prices amid growing prices in the EU. All they need to do is to pretend that nothing unusual is happening across their eastern border.

Returning to the subject of historical museums, one of their main purposes is to provide lessons to future generations. Just like House of Terror is created so that tragic stories of those who were persecuted, tortured or killed should be always remembered, it also warns against any attempts to establish and support communist, fascist and alike regimes. Alas, so far we see only hypocrisy from Viktor Orbán in this regard as well – despite his assistance in opening of the museum, it looks like he never shared its purpose.

All in all, whether it is really Hungary that has no alternatives beside russian oil and gas or Victor Orban himself who has no alternatives but rubles to satisfy his greed and power addiction – it will be determined later by experts in economy, political scientists and regular Hungarian people in the first place.

As for us, Ukrainians, it is imperative that after we win this war our people will definitely set up our own grand memorial. There we will gather chronicles of the heroic deeds of our warriors, rescuers, medical personnel and volunteers. Collect thousands of stories depicting lives of the refugees, who were forced to flee their ancestor lands, and compatriots, who had suffered russian terror during occupation. By all means we will document as many testaments to war crimes, committed by the russians, as we will be able to find – crimes against women and children, against innocent civilians, against captive Ukrainian soldiers and against all the martyrs who have lost their lives by the hands of rashism – this new terrible form of social cancer. Finally, a special place in our memorial will be dedicated to the countries, communities and even individuals, who have sincerely helped us in the time of our great need. 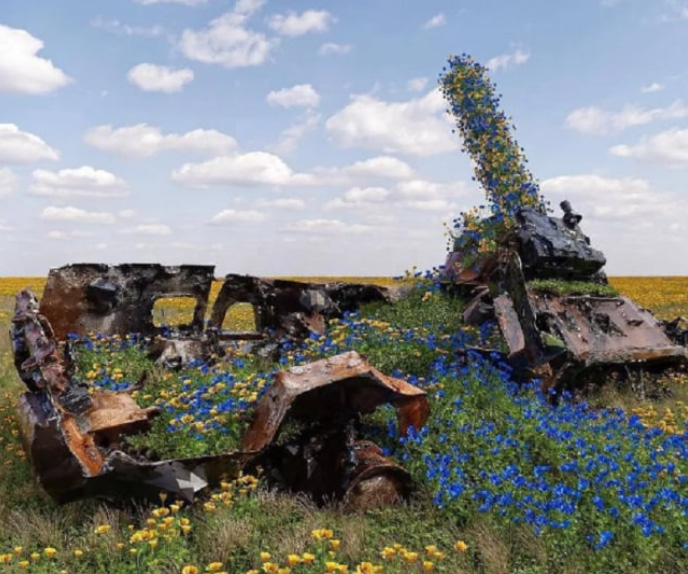 But for now, amid our daily fighting for survival, we hope that Ukrainians of the future will not forget this historical lesson. We should believe in them to not invert right and wrong, good and evil for some immediate gain or benefit, to never betray all the sacrifices that are being paid right now for their future. And we need to pray that, unlike today’s russian sympathizers, in the times of great national dilemmas future Ukrainian authorities and society will always make their decisions prioritizing honor and justice, virtue and compassion.

No Responses to “Victor Orbán sees no evil”