History of Ukraine: The Russian Captivity. 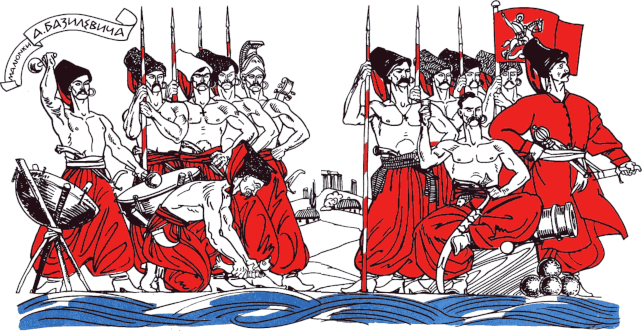 Some trivia about Ukraine on the 29th anniversary of country’s Independence by George V.Pinchuk. The Russian Captivity. Part 3.

After Mazepa’s defeat of 1709, Tzar Peter I of Russia hit very hard on the remnant of Ukrainian freedoms. The power of Cossack leaders was suspended. The tyrant subjected the eastern half of Ukraine to the so-called Small Russia Collegium, which was presided by general Veliaminov and did not even include ethnic Ukrainians. With the help of this puppet “government” and his so-called Synod (an assembly of ultra-loyal Orthodox bishops), Peter introduced some truly draconian laws. They were aimed, first of all, at the education and spiritual life of the Ukrainian people. All parishes and monasteries were thoroughly searched, and any manuscript or printed volume from their libraries that contained discrepancies in the language compared to the books published in Muscovy was burned. Thus, the language of the Church very formally remained the same Old Church Slavonic, but now it was completely rid of any trace of the local influence on the vocabulary and pronunciation. For the Ukrainian masses, it became a gobbledygook. Many Ukrainian bishops were transferred to remote parts of Russia (Siberia, the Ural Mountains) or to the city of Moscow, and the Ukrainian bishoprics and parishes were manned by the clergy from Russia-Muscovy. This meant that the entire education in Ukraine, both clerical and secular, was rid of the modern vernacular Ukrainian and profoundly Russified (“Muscovized”) – something that Ukraine feels even to this day. In parallel, Cossack regiments were put under the command of Muscovite military officers, and the people en masse were driven to Russia to build roads and fortifications. At least 100,000 Ukrainian Kozaks and peasants died of overwork and malaria building the new capital of the Russian Empire, Saint Petersburg.

After the death of the monstrous Peter I (1725) and his widow and heiress, empress Catherine I (1727), things became, paradoxically, somewhat better for Ukrainians. In the 1730s – 1760s the Ukrainian lands to the east of the Dnipro river became, again, self-governed, even though they were incorporated into the Russian Empire. Their top administrator, the Hetman of the Kozaks, reported only directly to the Russian monarch (in fact, doing whatever he pleased most of the time). The land was divided into parts according to the dislocation of the Kozaks regiments, where the local administrators were Hetman’s appointees in the rank of Colonels (полковники). This arrangement, called Hetmanshchyna (or Hetmanate), included also the city of Kyiv and a few small towns adjacent to its territory, even though they were, geographically, on the right (western) bank of the Dnipro. The Hetmanate era was marked by a huge revival of the Ukrainian culture, arts, literature, and scholarship. The Baroque architecture flourished. The Ukrainian baroque music was dominated by the three giants, Maxym Berezovsky, Dmytro Bortnyansky (Skurat), and Artemiy Vedel. The humanities received a big impact by a vagabond philosopher, theologian, and poet Hryhoriy Skovoroda.

Things became tough again during the reign of Catherine II (1762-1796). Naturally gifted, extremely intelligent, and playing “liberal” (corresponded with Voltaire!), this woman in her heart of hearts was a typical absolutist monarch. She feared and hated any dissent, any actual or even potential autonomy within her realm. Catherine finalized the process of “serfization” of the peasantry, making rural dwellers little more than slaves of their landlords. The serfs had no right to move to other places, could be bought and sold, and were forced to work for their landlords up to 6 days a week, excluding only church holidays. The Ukrainian Kozaks with their ages-old liberties infuriated Catherine. In 1764, she made her first devilish move. The Hetman of Ukraine at the time was Cyril (Kyrylo) Razumovsky, a younger brother of Alexei (Oleksiy) Razumovsky, the morganatic husband of the late Empress Elizabeth I (Elisaveta Petrovna, a daughter of Peter I). Catherine offered Cyril a deal: he had to abdicate as the Hetman, instead acquiring the title of a Count of the Russian Empire and remaining the (nominal) President of the Russian Academy of Sciences (bwahaha). Razumovsky understood that it was an offer he could not refuse. When he stepped down, Catherine simply abolished the Hetmanate and divided Ukraine into governorates (губернії), not any different from the governorates of Russia-Muscovy.

That same year (1764) the Polish throne went to Stanisław August Poniatowsky, who used to be Catherine’s lover and the father of two of her illegitimate children. Apparently, Poniatowsky still worshiped her and remained under her thumb. He allowed Catherine to become the “Protectoress” of the Polish-Lithuanian Commonwealth and to establish the so-called Permanent Council, which made the king almost a figurehead. Thus, the infamous partitions of Poland began. By the end of Catherine’s reign, in 1795, the Commonwealth, the Rzeczpospolita, the Republic, was no more. A huge part of it, including the capital, Warsaw, became merely a territory of the Russian Empire. Smaller (southern and western) parts of it went to Prussia (Silesia, Pomerania), and to Austria (Halychyna, the Carpathian Mountains and Transcarpathia).

To Ukrainians who lived west of the Dnipro river, the partitions of Poland did not bring any freedom or national revival. If anything, the situation for them became even worse. In the words of the great Ukrainian poet Taras Shevchenko, “Poland fell, and squashed us.” Yet, in 1848, serfdom in the Austrian Empire was abolished. The Ukrainian peasants were still poor and oppressed as a national minority, but at least they could now move freely and have some time and opportunity for themselves. In the “Russian” part of Ukraine, serfdom was abolished only in 1861, and in Prussia it remained legal till even later.

In 1775, Catherine ordered the Sich (the main fortress of the Zaporizhzhya Kozaks) to be destroyed. The last independent Kozaks leader, Petro Kalnyshevsky, was imprisoned, and the fortress was demolished.

The first half of the 19th century in the “Russian” part of Ukraine was a rather grim time of massive de-Ukrainization. Kozaks regiments were made into regular Russian imperial army troops. The Church was entirely Russified. There were no Ukrainian schools. The Ukrainian nobility spoke mostly French, as it was the custom among the Russian nobility whom they parroted. It is a wonder, a miracle that the Ukrainian language and the Ukrainian historical memory survived at all. The Ukrainian village became the center and the savior of pretty much everything Ukrainian. Peasantry continued to speak Ukrainian, and regard the Russians, or the Moskali, as foreigners. Here are the opening lines of the poem, titled “Kateryna,” by Taras Shevchenko:

But not with the Moskali.

Because the Moskali are alien people,

They cause you grief.

A Moskal cannot love except jokingly,

And he will abandon you with yet another joke.

He will go to his Muscovy,

And the [Ukrainian] girl is finished.”

And it is really a miracle that in 1798, Ivan Kotlyarevsky, a nobleman from the Ukrainian city of Poltava, working as a tutor for the rural Ukrainian gentry, wrote a comical (“mock-heroic”) poem, titled “The Eneida” (Енеїда). The poem is not a translation of Virgil but, rather, a very funny, very comical re-telling of the ancient Latin story, where the heroes retain the Latin names of the original “Aeneid” (Aeneas, Dido, Venus, Hebe etc.), but the story is entirely IN MODERN UKRAINIAN! It is THE Ukrainian language we learned at schools, THE language of the mainstream Ukrainian literature, theater, radio and television. Essentially, it is THE Ukrainian language spoken even today.

Moreover, the heroes of Kotlyarevsky’s “Eneida” have distinctively Ukrainian features. Aeneas is pictured as a “quick-witted lad and a Kozak through and through.” His fellow Trojans are dressed in Kozak clothes, cut their hair Kozak-style, and smoke pipes. Dido, Venus, and Hebe are typical quarrelsome rural Ukrainian wives. Jupiter drinks homemade moonshine and eats herrings…

And then, under a bit more careful consideration: the Kotlyarevsky story is, actually, the story of the ruined Sich and the fate of the Ukrainian Kozaks, who had to go through many trials and tribulations before “re-inventing themselves,” just like the Trojans in the original poem by Virgil.

No Responses to “History of Ukraine: The Russian Captivity.”