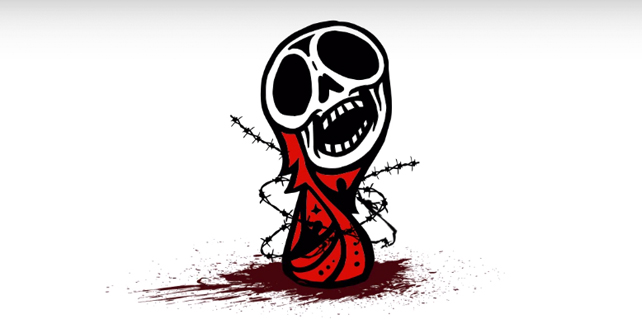 On June 10, InformNapalm volunteers posted a 30-second animated video calling to boycott the finals of the 2018 FIFA World Cup which will take place from June 14 to July 15, 2018 in Russia. If the video hits 100,000 views in the first 3 days it will  get to top trending on YouTube right before the start of the World Cup.

The video was created by Andrey Garin based on a series of posters by the famous Ukrainian artist and illustrator Andriy Yermolenko , one of the top advocates of the World Cup boycott.

We urge you to join our promo campaign. Share posters, videos and other content that will inform potential World Cup visitors of the true threat that Russia poses for the free world. International community must understand that Russia is an aggressor country and not an appropriate place to host international sports tournaments.

The Russian Federation bears responsibility for killing of many thousands of people in Syria and Ukraine. Millions of people keep suffering from Russia’s military aggression: their cities and villages are bombed and shelled, they are forced from their homes, they lose their  loved ones.

The world should also not forget about the appalling terrorist attack carried out by the Russian army in Donbas on July 17, 2014, when Russian military crew shot down Malaysia Airlines MH17 flight, killing 298 people, including 80 children, 3 of whom were infants. It is cynical to hold the final game of the World Cup in Moscow on July 15, and then, 2 days later, to commemorate MH17 victims killed by the Russian army.