Another Russian Orlan-10 drone shot down by Ukrainian military. Facts of Russian invasion 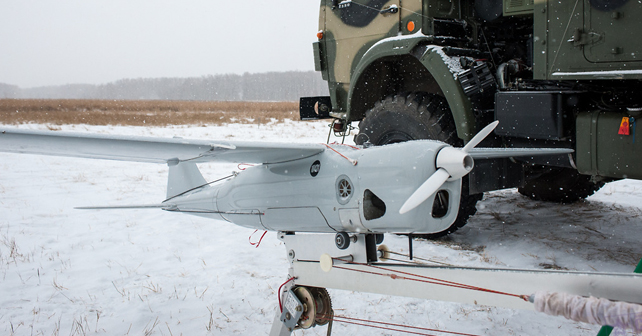 In the morning of December 29, the press center of the Antiterrorist Operation (ATO) Command reported in its daily update that on December 28, around 22:00, Ukrainian soldiers shot down a Russian unmanned aerial vehicle (UAV) near the village of Kurdyumovka (Donetsk Oblast). The drone is the centerpiece of the multipurpose unmanned aerial system Orlan-10. InformNapalm volunteer intelligence community collected numerous facts of Russia’s use of this type of military equipment in Donbas.

From 2014 to 2017, InformNapalm volunteers collected information and evidence on the use by the Russian Federation of at least 7 types of military UAVs against Ukraine. Among them are: Granat-1, Granat-2, Forpost, Eleron-3SV, Zastava, Tachyon and Orlan-10. The Orlan-10 type features the most on the evidence list, as the capabilities of this Russian multi-functional system are quite wide. Apart from the classical aerial reconnaissance, it can also work as part of the RB-341V Leer-3 system which is operated by the Russian Armed Forces and is used to jam ground radio communications. This system has also been repeatedly spotted in the occupied territory of Donbas.

Read more on the destruction and spotting of Russian UAVs of the Orlan-10 type in Donbas in the exclusive investigations of the InformNapalm community.

Based on the results of its own OSINT investigations conducted during from 2014 to 2017, the InformNapalm community formed a database of Russian weapons and equipment that was recorded or destroyed in the Donbas. At the moment, the list includes 44 types of Russian military equipment, which could not have been captured from the Ukrainian Army. Therefore it could only have been supplied by Russia to the illegal armed groups in Donbas. Permanent link: RuWeaponryDonbasEN

No Responses to “Another Russian Orlan-10 drone shot down by Ukrainian military. Facts of Russian invasion”