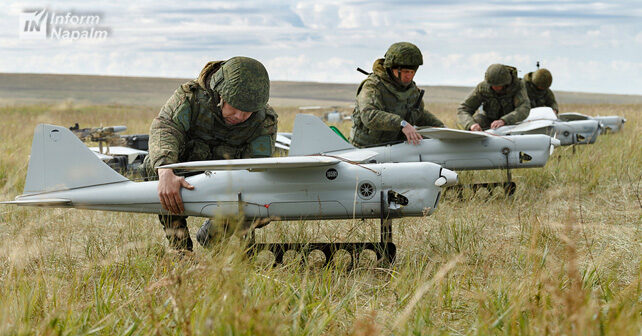 “In the area of the village of Maryinka, an enemy unmanned aerial vehicle of the Orlan-10 type was spotted overflying the contact line. The enemy’s UAV was promptly jammed by electronic warfare assets,” the Ministry of Defense of Ukraine reported in its daily situation update from the area of the Joint Forces Operation (JFO) for June 22, 2021.

Since 2014 throughout the Russian military aggression against Ukraine, Russians have lost at least 20 Orlan-10 UAVs in the combat zone, according to open sources. InformNapalm volunteer intelligence community has documented more than 15 facts of the loss of this type of UAV in Luhansk and Donetsk regions. Of these, five wrecks occurred through system failures caused by the Ukrainian EW operations, and ten Orlan-10 drones were shot down with small arms and air defense systems.

In 2017, InformNapalm community published several investigations documenting the deployment of Orlan-10 UAV systems by Russian servicemen on the territory of Ukraine. The analysis was carried out on the basis of documents obtained by the hacktivists of the Ukrainian Cyber Alliance from the computer of the reconnaissance commander of the so-called 2nd Army Corps of the Russian occupation forces in the Luhansk Oblast. Russian Orlan-10 drones were also repeatedly shot down in Syria.

Up to three Orlan-10 UAVs also make part of the Russian electronic warfare system RB-341V Leer-3, which has been repeatedly seen on the occupied territory of Luhansk and Donetsk Oblasts of Ukraine. Within this system, Orlan-10 drones are used for jamming of radio channels, among other things. In 2017, German tabloid Bild published a detailed feature on this topic with reference to InformNapalm investigations.

Also, UAVs have been used for psyops and information attacks in the JFO zone. Russian specialists carried out mass SMS mailings with the help of this system. Associated Press news agency also wrote about this in detail with reference to InformNapalm.

Manufacturers of Orlan-10 UAVs should be sanctioned

Since 2018, InformNapalm volunteers have been drawing the attention of foreign journalists, diplomats, politicians and experts to the weaknesses of this Russian technology. Subject to sufficient political willpower, the production of the Orlan-10 mutirole UAV systems, which are actively used by the Russian army in hostilities against Ukraine, could be blocked by appropriate sanctions.

According to open sources, the system was developed by the Russian radio technology company Special Technological Center (ООО Специальный Технологический Центр). This company takes part in the Russian development effort for the unified tactical command and control system within the concept of network-centric warfare. However, as it turned out during the study of a downed Russian UAV, only the body of the drone and the MNP-M7 navigation receiver were manufactured in Russia. And even the receiver is based on the ADSP-BF534 chip produced by the American company Analog Devices. Other components: GPS tracker, starter generator, engine, ignition module, flight controller, telemetry transmission module and GPS module were produced in the USA, Germany, Japan, China and other countries. These components are dual-use goods, which Russia purchases to apply for military purposes.

By Roman Burko specially for InformNapalm. Translated by Artem Velichko. Distribution and reprint with reference to the source is welcome! (Creative Commons — Attribution 4.0 International — CC BY 4.0) InformNapalm social media pages: