The Anti-Terrorist Operation in Ukraine: Summary for August 13, 2014 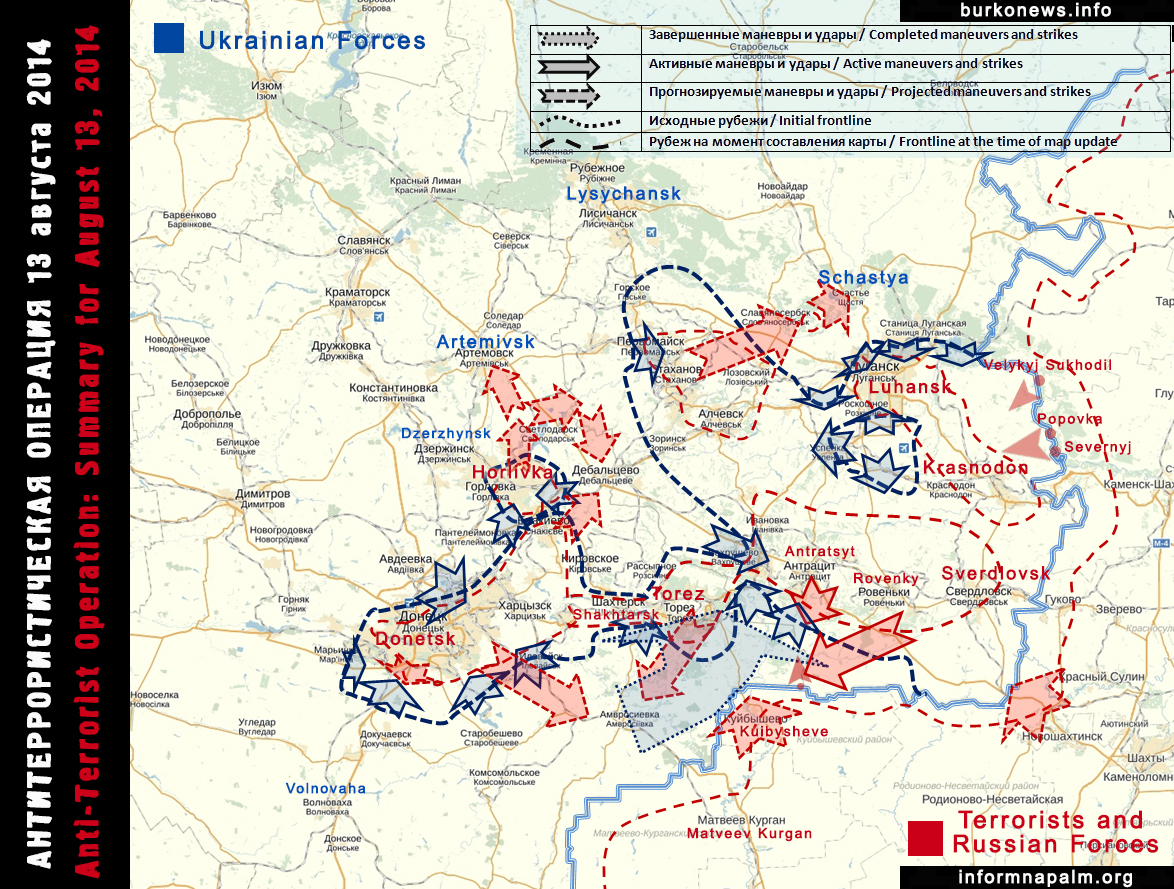 Situation in the ATO Zone Deteriorates

On August 13 the situation at the fronts has significantly deteriorated due to the increasing build-up of reinforcements from Russia. Last night the terrorists shelled the ATO forces in the area of Vuhlehirsk thus thwarting the attack of the Ukrainian troops on Horlivka and Makiivka. It is interesting that DPR in their summaries presented this shelling as a punitive operation by the “junta”. Such manipulations of information by pro-Russian terrorists in their attempts to brainwash the civilians cause bewilderment: why does their press center work faster and smoother than the ATO press center?

According to yet unconfirmed reports, a part of the ATO forces were encircled in the area of Ilovaisk. This information is being verified; however, we cannot rule out its authenticity because the situation in that area is extremely critical.

We are skeptical about reports that the terrorists are preparing to break out of Horlivka towards Donetsk. This is of no use for them given that in the past days a lot of weapons (including multiple rocket launchers) were transferred to Horlivka. Instead, they may want to counter-attack on Kramatorsk and Druzhkivka. The terrorists are also preparing a secret attack in the area of Debaltseve and are planning to encircle the group of Ukrainian troops advancing upon Horlivka from the east, along with an attack from Horlivka.

Last night there was an artillery duel near Slovyanoserbsk. The ATO forces attacked the place of deployment of BM-21 “Grad” systems of the terrorists with multiple rocket launchers. However, judging by the fact that those Grads continued to attack towards the ATO grouping in the north of Luhansk, they have failed to destroy them.

The terrorists began a counter-attack towards Miusynsk and Savur-Mohyla. They also performed contact reconnaissance. Using four armored vehicles they perform an exploratory attack towards Savur-Mohyla from the direction of Antratsyt and Rovenky. The main forces of the terrorists will likely go from Snizhne via Manuilivka and Petrivske. We made this conclusion after receiving information about arrival of reinforcement in the form of manpower and armored vehicles to Snizhne. According to operational information up to 40 KAMAZes of terrorists arrived to the city.

As for Miusynsk, the terrorists managed to take the center of the city under their control and continue to fight the ATO forces at the southern outskirts. The attack on Krasnyi Luch from the north-west could solve the problem of Krasnyi Luch and Miusynsk but it has not succeeded yet.

Approximately at 16:00 we received additional information that the convoy of over 100 units of Russian military equipment entered Ukraine via Dubrovka (near Kuybyshevo). The convoy moved towards Snizhne. In the first half of the day there was complete lack of communication in Snizhne and Torez. It is possible that communication was jammed in order to cover the transfer of significant forces of militants towards Snizhne. It should be noted that the convoy of the vehicles in Snizhne was attacked by the Air Forces of Ukraine; as a result, 1 APC and 2 Urals of militants were destroyed. In response, the terrorists fired the aircraft from MANPADS but the aircraft released flares and departed safely. The tactics of destruction of convoys by aircraft gives positive results but is currently rarely used by the ATO forces.

According to our forecasts, the group of Ukrainian troops in Miusynsk gets in a very difficult position. In this situation it is extremely important to successfully complete the attack upon Krasnyi Luch to save our forces.

With regard to the attack upon Donetsk: after unsuccessful attempts to take Ilovaisk the ATO forces had to regroup.

Judging by the activity of terrorists in Mospyne they planning some action from this area. Perhaps this will be a breach towards the Russian Federation, or maybe an attack which together with the attack from Snizhne would allow the terrorists to cope with the ATO group in Mala and Velyka Shyshivka.

To summarize, the offensive initiative of the ATO command is lost now. We want to believe that all possible counter-attacks the terrorists may perform have been analyzed by the ATO General Staff and there are responses to all actions that the terrorists may take.

Throughout the day we repeatedly drew attention to the possible provocations with the “humanitarian” convoy. Closer to the evening Russian curators of the terrorists were ready to implement disinformation operations.

At around 19:30-20:00 the majority of the information channels of the Russian terrorists (groups in social media, forums, Zello channels) started cranking out disinformation en masse. According to the false message, the Ukrainian troops allegedly broke out of the Luhansk airport by battle and are fighting with tanks in the village of Novosvitlivka, located on the key highway M04, connecting Luhansk with Russia.

The site “Russian Spring”, a mouthpiece of the terrorists, went on to say “This maneuver is explained not only by tactical but also political motives. It is from this direction that the entrance of the Russian humanitarian column onto the territory of Novorossiya would have appeared the most logical”. 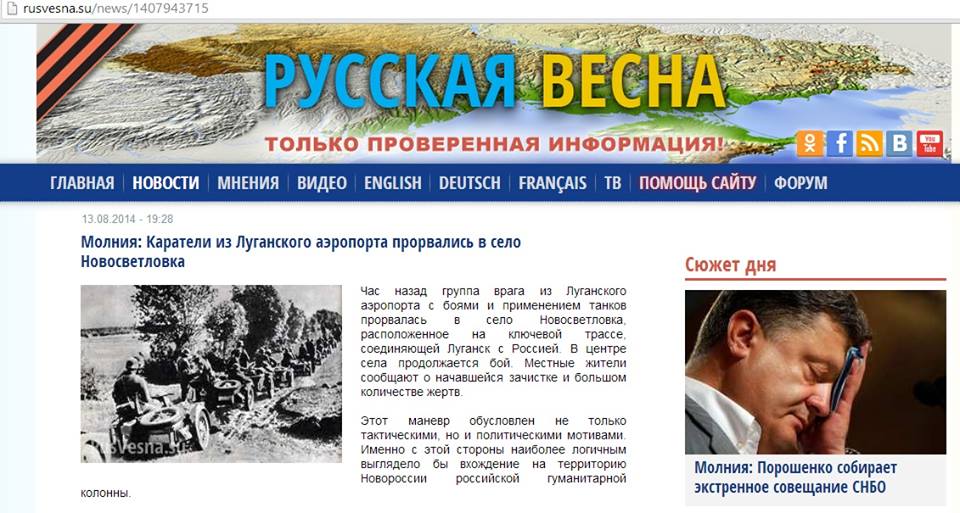 We checked this information and contacted the Ukrainian security officials at the airport. The ATO had not carried out these maneuvers. From this it follows that Russia is organizing media support for a provocation with the entrance of the “humanitarian convoy” from the direction of Izvaryne. It is most likely that there is a plan by the Russian special forces to shell the convoy pretending to be “Ukrainian punishers” somewhere near Novosvitlivka.

4 Responses to “The Anti-Terrorist Operation in Ukraine: Summary for August 13, 2014”