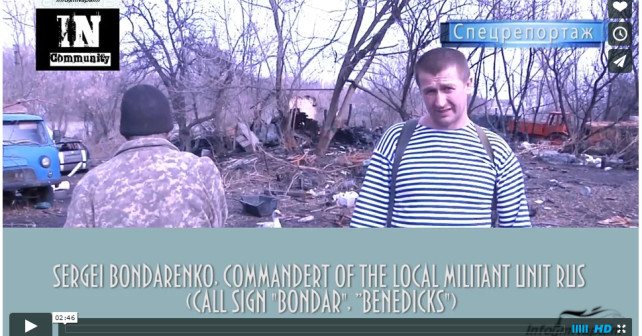 Infighting continues among the pro-Russian terrorists and criminals.

On March 6 in Antratsyt (Luhansk oblast) there was an explosion of a powerful radio-controlled explosive device. This explosion was associated with the assassination attempt on Sergey Bondarenko (also known as “Bondar” and “Bendiks”), the leader of Rus, a local militant unit. According to various estimates, this unit consists of more than 200 fighters.

The epicenter of the explosion was on the shoulder of the Rostov highway (Rostovskaya Street) across the street from the Russia department store, next to the store’s service access road and a gas station controlled by Bondar. There was no damage, except for a destroyed spruce tree.

It is noteworthy that this act of intimidation is also associated with the recent arrest of a local businessman, who was locked into the basement used by Bondar. This arrest upset the leadership of the LNR.

As for the basement dungeons beneath the local court building, according to various sources, about 10 people, mostly elderly, are being kept there.

A few days after the assassination, the situation in the city remains unstable. Local residents are spreading the rumors that LNR will soon remove Bondar – Bendiks, as well as many other poorly controlled warlords.

Bondarenko himself has been behaving erratically over the last several days; it seems that he has been under the influence of alcohol or drugs.

It is him who is still the only influential figure in Antratsyt. Almost nothing has been heard of the Cossack Commandant; the LNR Commandant is also avoiding an open conflict with Bondar, though Bondar himself is probably expecting his conflict with LNR to continue. To protect his residence at the car wash near the location of the explosion, he set up numerous defenses near the gas station on Petrovsky Street and at the central street intersection. In addition, a BRDM has been placed in the car wash lot and a BMP is now on the corner with Petrovsky Street. The Cossacks located in Antratsyt government building didn’t waste time either. They equipped themselves with a road barrier, by knocking down a light pole and blocking the entrance to the parking lot, and deployed extra armed guards. So the cold war of Antratsyt gangs continues.

It is worth noting that Bondar’s armored SUV is owned by a local businessman named Vladimir Sbitnev, born in 1956, residing at School Street, 27, Zelenyi Gai village, Antratsyt district. That house has been the main residence of Bondar’s group since last summer.

It is interesting that Sbitnev himself is a co-founder of an Antratsyt-based TEMP LTD-A company, which is now registered in Kramatorsk. Its business is metal and coal, It controls private mines, actively cooperates with the separatists and, in particular, with Bondar. All cars that belong to Temp have warnings that the property is under the protection of Rus.

This shows us how large and small businesses of Donbass establish economic ties with terrorist groups.