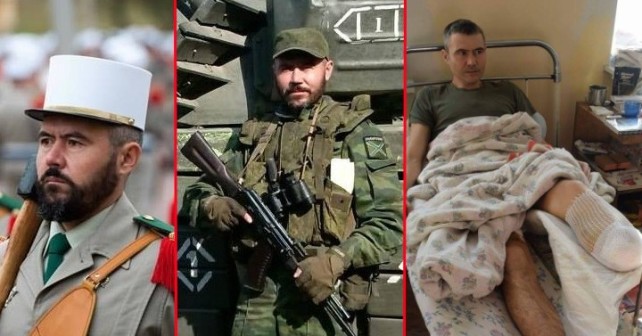 The European Union finally got seriously worried about the Russian propaganda. At the end of January, 2016, the Reuters agency reported that NATO even plans to create a separate division to counter the Russian propaganda. The new unit, as noted, will act taking into account the tactics of the enemy, which he uses for aggressive influence on the target audience.

The Russian propaganda has long gone beyond the sphere of television and Internet, it is deeply rooted in the lives of the Europeans. A huge number of adepts of the ‘Russian world’ with the support of right-wing parties openly hold rallies and conventions, where they tell about the ‘pernicious influence’ of the United States and ‘the Civil War and Fascism’ in Ukraine using the Kremlin’s phrases. 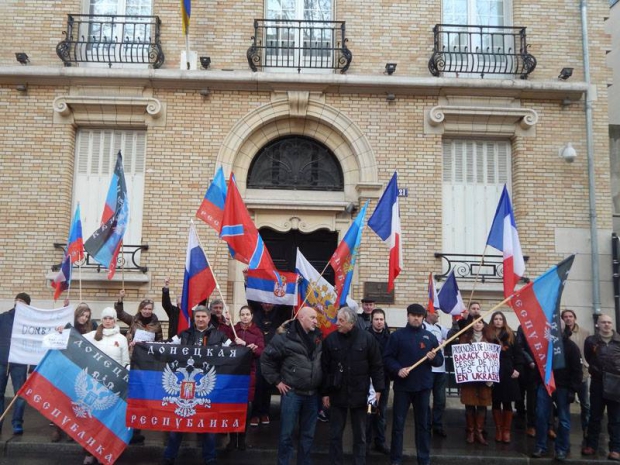 Thus, a meeting of the French non-governmental organization ‘Novopole’ is scheduled on February 27, 2016. It will be held in Strasbourg, in the building of the Serbian Orthodox Church of St. George (Donona str., 2A). This organization positions itself as a ‘representative of Free Novorossiya in France’. 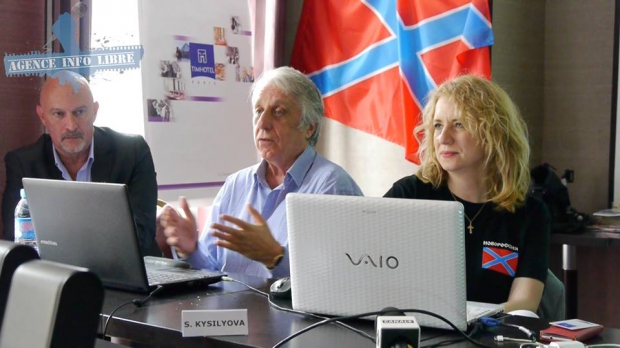 In the left of the photo you can see one of the creators of ‘Novopole’, André Michel Chancl, who is an activist of the so-called ‘French antimaidan’, participant of all Paris rallies against the Ukrainian government and the EU’s position about Ukraine, follower of Russia and Putin.

The person in the middle is another creator of ‘Novopole’ – Alain Benajam, who is a close friend of ‘Novorossiya’ leaders. Svetlana Kissileva, the president of ‘Novopole’ is in the right.

We have already published the list of pro-Russian websites in the French information field.

But let us return to the speakers of the upcoming meeting, based on the advertising poster. 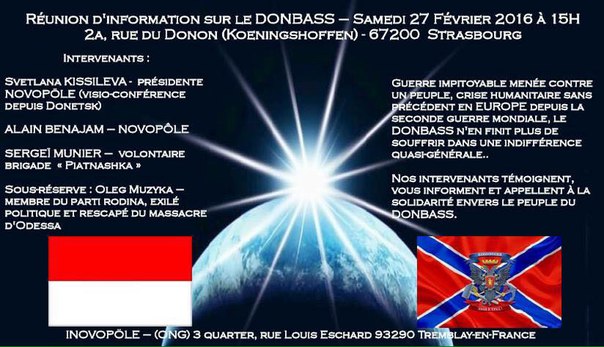 One of them is Sergei Munier (VK profile), a French ‘volunteer’ of the so-called ‘DPR’, who serves in ‘Piatnashka’ international brigade. He was even once mentioned by ‘Novorossia Today’ website. Archives of VKontakte, Facebook, Instagram, album and contacts.

From an interview to the well-known Russian propaganda websites it became known that Sergei was born in Luhansk in 1992 and left for France in the age of 10 together with his mother. He served there in the ‘1er régiment de spahis’. The photos from Sergei’s album confirm the information about his military career. Thanks to our friends from France, we also know that Sergei served in the 6th light armored brigade, to which the 1st cavalry foreign regiment is assigned. The servicemen from this detachment have taken part in numerous operations: Afghanistan, Lebanon, Chad, Ivory Coast, Yugoslavia… 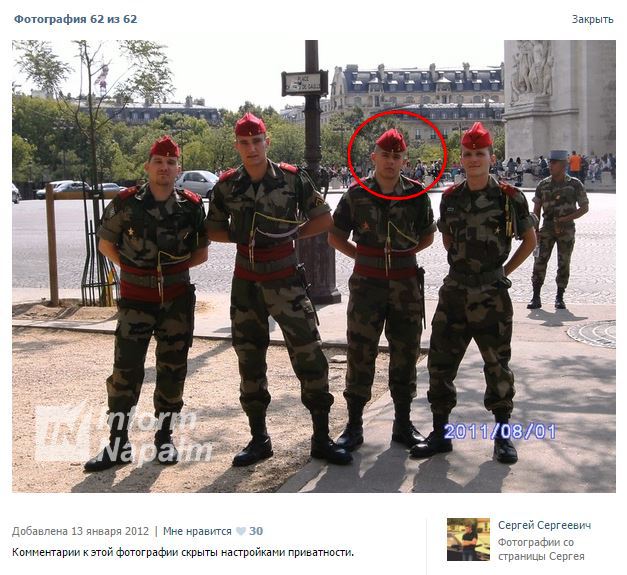 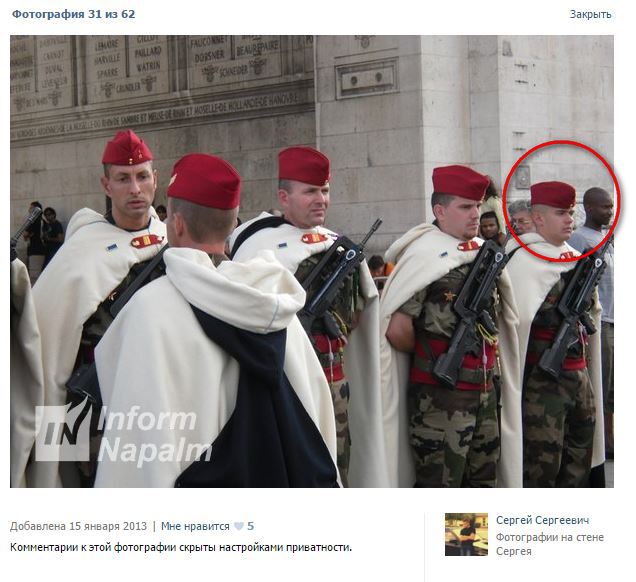 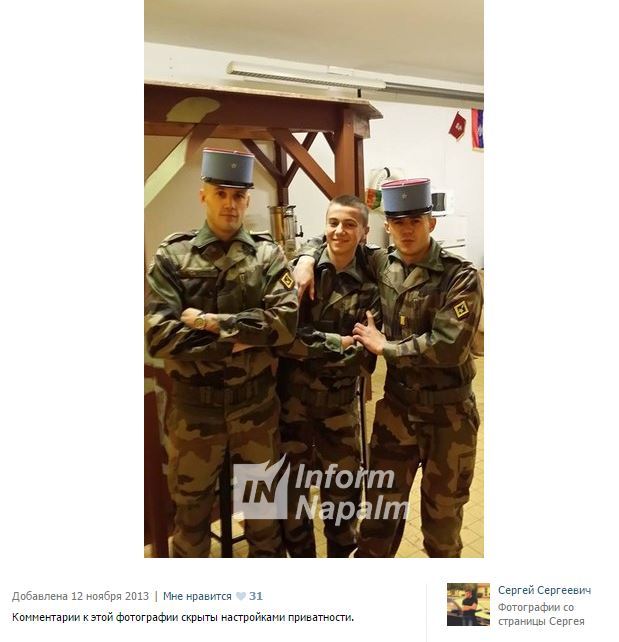 According to the interview, Sergei Munier has been to Donbas twice. The first time – as a militant of the ‘Vostok’ battalion in June-August, 2014; the second time – in the period between April and September of 2015. Since Sergei had some battle experience, he initially was an instructor, but later he ‘sharpen his skills’ in the ranks of ‘Piatnashka’ brigade during the attempt to seize Marinka in July, 2015. 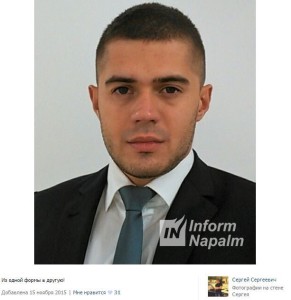 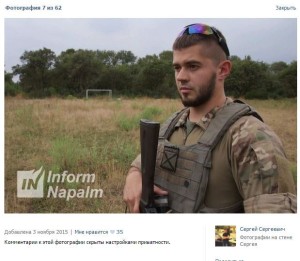 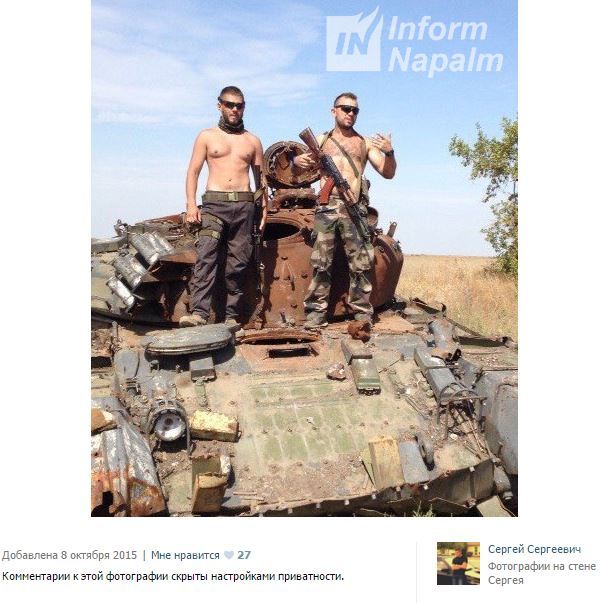 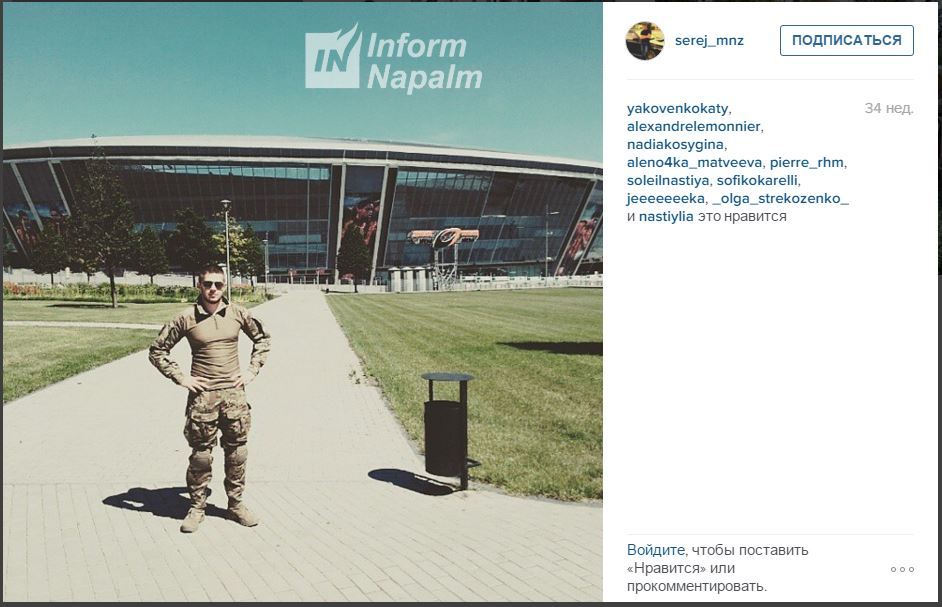 But despite all his rich experience in fighting on the side of militants in Donbas, it did not prevent him from visiting foreign countries, moreover it also allowed him hold agitation campaigns on the pro-Russian congresses of France.

This excessively tolerant attitude of the French authorities to mercenaries fighting on the side of pro-Russian terrorists in Donbas raises many questions. We know that mercenarism is punished in Europe. InformNapalm reported about such sentenced participants of the war in Donbas in one of the previous publications – so in this case everything depends on the awareness and the desire of the French secret services to stop subversive activities of the Russian agents.

But Sergei Munier was not the only Frenchman, who drew our attention in the context of the war in Donbas.

Sergei Zavdoveyev (known as ‘Frenchman’), a minister of the so-called ‘DPR’ and concurrently commander of the ‘Legion’ detachment, has long been on everyone’s lips. Sergei Zavdoveyev misrepresents himself as a former ‘French legionnaire’. Thanks to our sources in France, we got to know that the story about his serving in the French Foreign Legion was just a fairy tale. Besides that, the people who served in the Legion between 1984 and 2004 have not heard of him too. 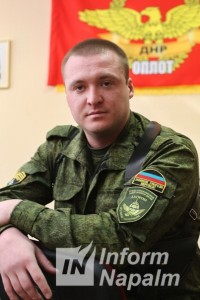 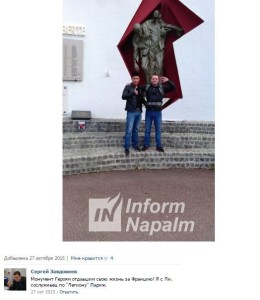 Another representative of the French crimson berets who fought in the ranks of ‘DPR’ is Aleksandre Nabiev (VK profile), a former servicemen of the regular French army. Here are the links to the archives of his VK account, Facebook, album and contacts. Aleksandr served in the 1st company of the 2nd airborne foreign regiment (2е R.E.P.). The 2nd airborne regiment is the most trained detachment of the Foreign Legion and has a great history. 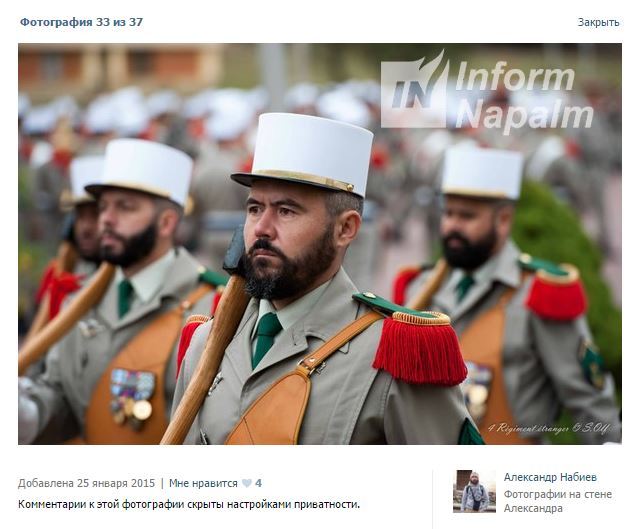 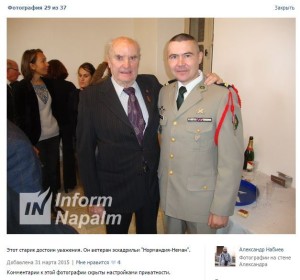 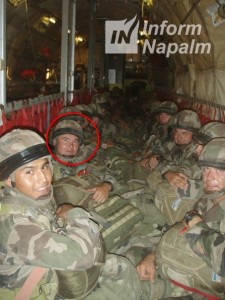 As a legionnaire, Nabiev has one assignment with combat actions under his belt. He retired as noncommissioned officer (sergeant), demoted because of the alcohol addiction. For the last 5 year Aleksandr worked in the orderly room. He fights in Donbas since the fall of 2014 and is currently undergoing treatment for the loss of the limb. 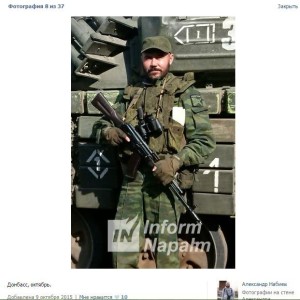 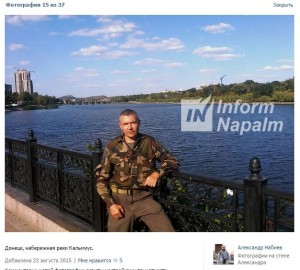 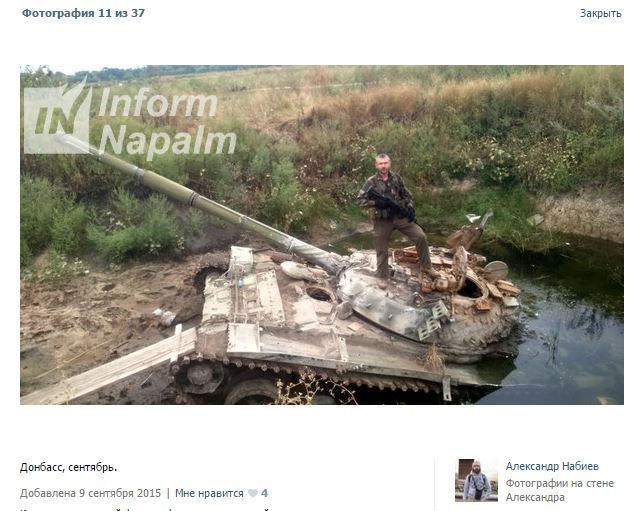 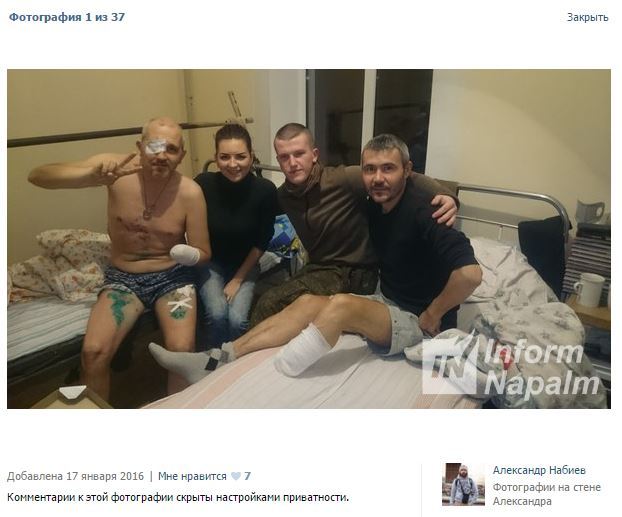 Another Nabiev’s brother-in-arms, a militant from ‘Piatnashki’ detachment, CASTEL Erwan Jean François (VK profile) was spotted in a group photo. These are the archives of VK profile, FB profile, album, contacts. 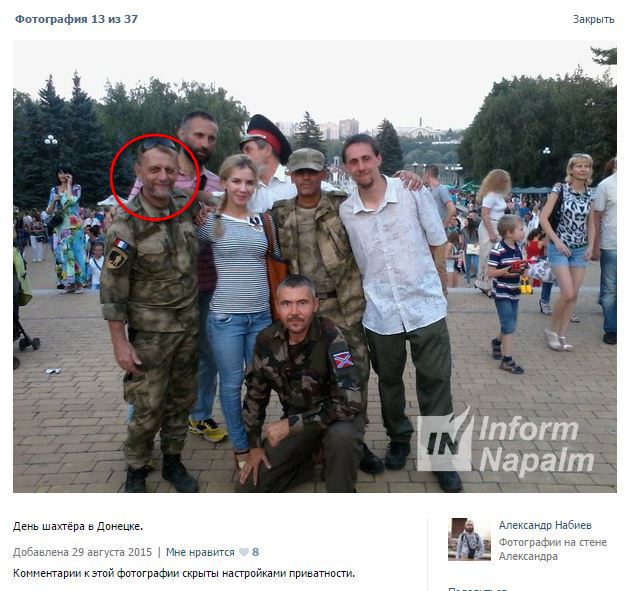 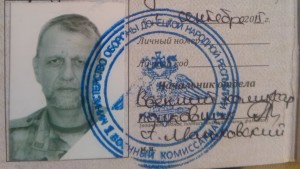 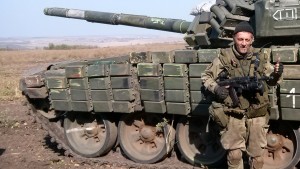 There are plenty of videos with him in the net. 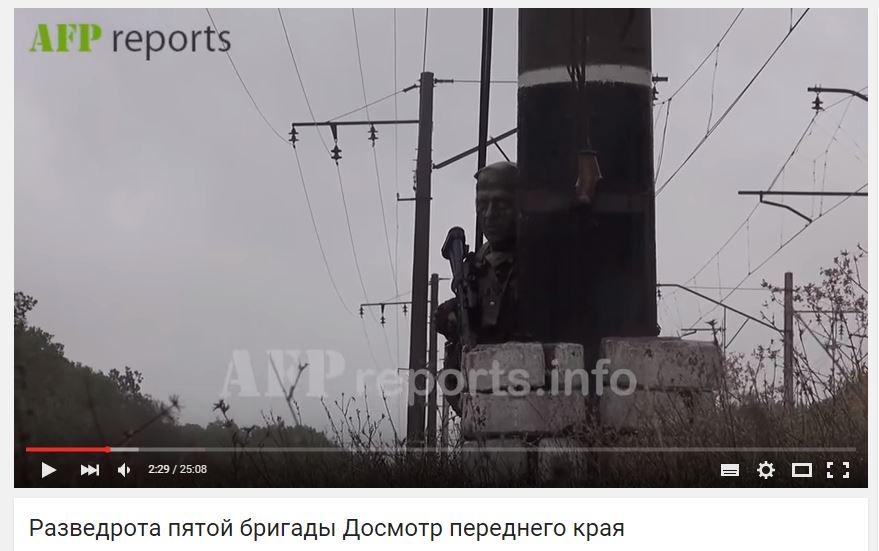 Erwan Castel states that he came to Donbas ‘to stop advance of NATO to the East and prevent the confrontation between the US and Russia in Europe’. For now he is luckier than Nabiev. During the visit of the Marie Le Pen’s party’s delegation to Donetsk, on the press conference which took place on January 16, 2016, Erwan told about the ‘business trips’ of the French to Donbas. 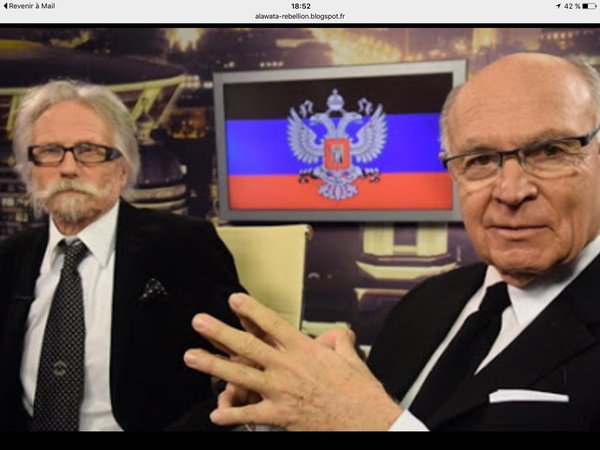 Lawyer Josy-Jean Bousquet is in the left, politician Jacques Clostermann is in the right. The photo was taken during the visit to Donbas

According to him, the total number of the French citizens that have passed through the combat actions in Donbas is 25-30 people. When asked about the consequences of their presence in Donbas and the possibility of providing the necessary legal aid in connection with the emergence of problems on the facts of the mercenarism, Jacques Klostermann, the president of ‘My country is France’ association included in the coalition of Marine Le Pen, said that the French media had no information about such ‘volunteers’.

Interesting details of lives of Josee Jean Bousquet and Jacques Klostermanne, the ‘peace ambassadors’ in ‘DPR’, can be found here. 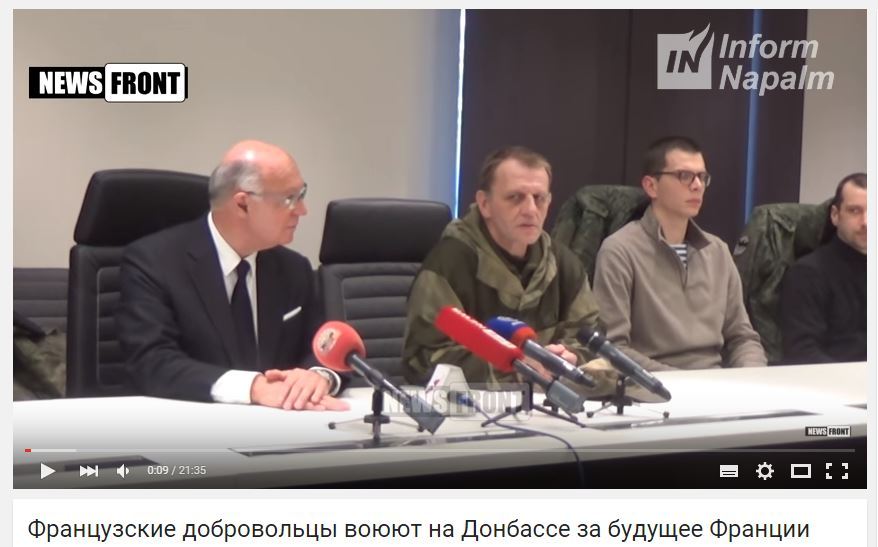 The video shows also other French besides Castel. We will try to provide you with more details about them in our next publications.

The InformNapalm international volunteer community’s publication tries to draw attention of the French citizens, the media and politicians to the facts of participation of the French residents in the illegal activities against Ukraine. The Russian agents that lately liven up in the light of the war in Donbas also aggressively carry on propaganda in France, using all the methods of the Russian information machine, including defamation, manipulation of facts and introducing of outright misinformation about the events in the east of Ukraine.

The upcoming conference of the ‘Russian world’ adepts, which is planned to be held in Strasbourg on February 27, will be in fact an event where the French citizens (including the former military and reservists) will be enrolled to fight in Donbas.

We urge the French Foreign Ministry and other official structures to pay attention to the provided facts in order to prevent impunity of citizens who took an active part in the hostilities on the side of gangs of the so-called ‘DPR/LPR’.
Through such pro-Russian agents of influence who have been ideologically and militarily tested in flash points, the ‘Russian Spring’ can come to the streets of the French cities, so it is important to suppress the development of ‘hybrid war’ tumor in its beginning.

2 Responses to “‘Russian World’ in France”