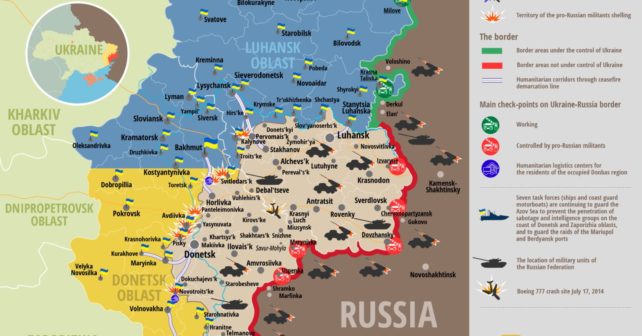 From the time 00:00 July 14, the enemy has violated the ceasefire regime 8 times.

The armed units of the Russian Federation Armed Forces opened fire on the positions of our troops using weapons forbidden by the Minsk Agreements, namely 82-mm caliber mortars. They also used grenade launchers of the various systems, weapons carried by armored vehicles of the infantry, large caliber machine guns, and small arms.
In the area of responsibility of the operative-tactical group “EAST,” the adversary opened fore on the Joint Forces positions 4 times:

Twice near SHYROKYNE, from the direction of SAKHANKA – using small arms;

Near NOVOTROYITSKE, from the direction of DOKUCHAYEVSKE – using a tripod-mounted anti-tank grenade launcher, a large-caliber machine gun, and small arms;

In the vicinity of BOHDANIVKA, from the direction of PETRIVSKE – using grenade launchers of the various systems, a large-caliber machine gun, and small arms.
In the area of responsibility of the operative-tactical group “NORTH,” the adversary opened fore on the Joint Forces positions 4 times:

Near KRYMSKE, from the direction of SMILE – using an 82-mm caliber mortar, a portable anti-tank grenade launcher, weapons carried by armored vehicles of the infantry, a large-caliber machine gun, and small arms;

Near the village of ZAITSEVE, from the direction of ZAITSEVE – using an automated grenade launcher, and small arms;

Twice near NOVOLUHANSKE, from the direction of DOLOMITNE – using 82-mm caliber mortars and automated grenade launchers.

There were no casualties on our side in spite of the enemy fire. Our units have responded adequately to each case of fire opened by the Russian Federation troops. The adversary’s casualties are being investigated.

Over July 13, the armed units of the Russian Federation Armed Forces have violated the ceasefire regime 15 times; of these, four times the fire was opened using weapons forbidden by the Minsk Agreements, namely, 122-mm caliber artillery systems, 120-mm and 82-mm caliber mortars. They also fired on our defenders using grenade launchers of the miscellaneous systems, large-caliber machine guns, and small arms.

On July 13, the representatives of the National Police and the National Guard of Ukraine acting as parts of the Joint Forces have uncovered 1 murder, 1 robbery, 4 thefts, 2 cases of fraud, 4 cases of illegal narcotics possession, and one case of service-related infraction. Four persons were arrested on suspicion of their participation in the activities of the Russian Federation Armed Forces. Twenty-three misdemeanors were documented.

The military and civilian administrative and judicial organs in the area of the Joint Forces operation worked according to their routine schedules. The social, political, and humanitarian situation remains under the control of the Joint Forces.