Cossacks LNR recorded an angry appeal to Putin and Plotnitsky 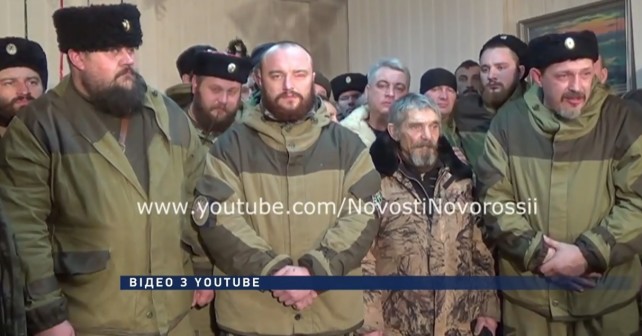 In the end of Desember, 2014  the cossacks of LNR recorded an angry appeal to Putin and Plotnitsky:

Today we would like to address the world community, and personally Vladimir Vladimirovich Putin, and tell what is going on in the so called Luhansk People’s Republic. Your protégés, Mr. Plotnitsky, steals wagon loads of coal every day. I have personally counted 164 of such wagon loads today. There are documents that prove all of this. Each of us was fighting to make the life of people easier. Here you see people who entered the Security Service of Ukraine building and who said the word “Russia”. I would like to ask Russia – how long will Mr. Plotnitsky and those strange Jews be robbing us? I will tell you, who Mr. Plotnitsky is – he is a protégé of Natalia Korolevskaya. Right now there are people of Mr. Yefremov who are in the Regional State Administration building. We would like to ask whether we were entering the building to get this? Whether “Bars” and all others were dying for this?

We wanted an easier life for people.  From all the 10 so called humanitarian convoys only one has reached people. All other goods have been sold. I would like to ask: who will hold accountable? Mr. Plotnitsky and all the others? I understand, many people would say that we have elected him. I will tell you how these elections were conducted!

No more lies! We have risen for freedom and we are free people! Mr. Plotnitsky said in Brianka that we are extremists. So, dear Ihor Venediktovich, you are thief! You are thief of people’s trust. You have implemented social cards: if a person does not come to the elections, he or she does not get a pension.  There was no such intimidation anywhere else in the world. There was no such intimidation even in fascist Ukraine. You are worse than they are. We demand your retirement. We, the first cossack regiment of Platov, demand your retirement! And the Whole Luhansk region will rise together with us! They see how their resources are being stolen, how you steal everything possible and not possible every day; how those minion fighters, who were included in brigades, take apartments and live there. Because they “have a right for this”!

Why haven’t we stolen anything? We were fighting in Severodonetsk, Lisichansk, Pervomaysk, we have taken villages of Frunze and Donetski etc. And where were you? Were you sitting in the Regional State Administration building? Ask each of them what have they got from this war; only ruins and pain. And let’s see what you have got. So I would like to know, when you visited Brianka, why didn’t you work up the courage to visit us? Is it because we have such piles of documents that show what you have stolen?

You together with Mr. Bolotov were cutting wagons into pieces in Sentianovka. And what were we doing, we who were stealing those wagons from Popasna and bringing them in order to leave them for the Republic. And now you say that you have nothing to transport the coal with. So why do you taking this coal away? Where are real social payments? Where is at least one law from your fucking parliament? Where are they? What do we need you for?

You talk about a Cossack republic. No, we are for the LNR, but without you. Without Ihor Plotnitsky, without Koriakin, and all that trash which sits there. We want one thing: not show but actions.

Excuse me, when you bring 35 presents to the children’s foster home once in half a year, “thank you very much”, Mr. Koriakin. You are sucking a dick Liosha. We are all waiting for you in Stakhanov. Come to us. Here is an online salute to Mr. Tambov. You know about a flash drive which is in my pocket. If in the next few days something happens to any of these people, the information on this flash drive will be spread to all servers in the world. And then we will play for completely other resources.

All those people here have risen for Russia. Do not destroy that belief in them. Who gave you a right to decide for the whole large country? Each of them, or at least most of them, were born in the Soviet Union. And we remember it unlike you. You want only collecting and stealing. Learn how to live! Learn to live as people live! Each of you steals or “solves problems”. I will give you an example: Luhansk Teplovos has sent three locomotives, where are they? An address of destination is the town of Rivne. Where does the coal go? I will tell you: to the same place, to Western Ukraine.

You went to Minsk and made that fucking peace agreement. Who was it peaceful for? I ask you a question: who was this agreement peaceful for? Come to Pervomaysk and look how glad we were for your peace. You thought that we would be happy when a new manning table of a regiment comes and we get new ranks of colonels. Each of us is glad to be sergeant or staff-sergeant. We are glad to have a lot of brothers and not because we get new ranks, money etc! If you think that you bought some drunkards, brought them here and they will do everything for you, no – this is our land. And we will do everything here. And do not shout here about Cossacks. There is another talk here: this is our land, we were born and raised here, we lived here and, if God helps, we will die here when we are old. We have risen for freedom and not for you giving us social cards, or any gifts. We do not need your cheap gifts. There is a good saying: “If you want to feed a hungry man with fish, give him a rod, not a fish”.

So, Vladimir Vladimirovich, we ask you to give us a rod, and not to feed us with fish! Look what is really going on. When we were telling you that Mr. Surkov is a thief, you did not hear us. Yes, we know that you’ve dismissed Mr. Surkov, but this did not change anything. There are the same people everywhere. A regional prosecutor is a former regional prosecutor. The Deputy-Head of the Ministry of Internal affairs used to be an assistant of the ATO Head of Ukraine 2 weeks ago! One question: did anything change?

What were we losing friends for? We will do more for you. We will film a parade of a whole regiment for you tomorrow. It will consist of 1500 people and everybody who will join it. You know, we are not afraid of any threats that we will be killed. We were killed many times and we are still alive. And yes, happy new year to everyone!