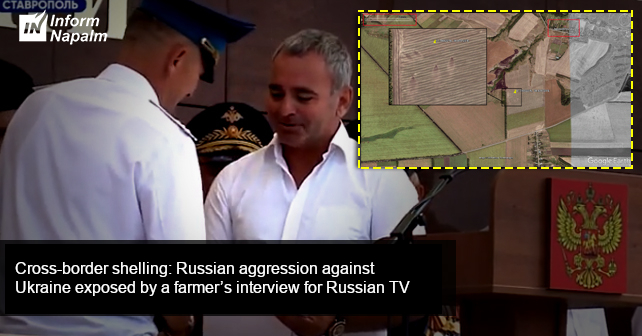 At the beginning of August 2019, a report was published in the regional media about a Russian farmer Sergey Avakian arriving to celebrate the 89th anniversary of the airborne troops in Stavropol and awarding soldiers of the 247th Air Assault Regiment (military unit 54801) of the Russian army. They were awarded for alleged “protection his fields from land mines and fires during the harvest”. InformNapalm volunteers investigated what the Russian military really did on these fields near the border with Ukraine in July-August 2014. 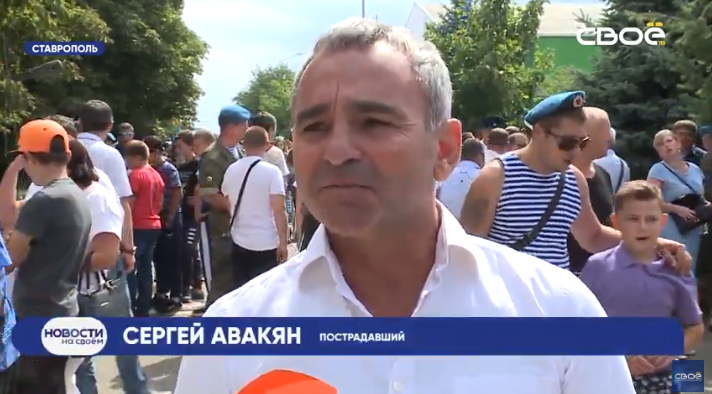 We thank the blogger Necro Mancer, who highlighted this video on Twitter and prompted the volunteers of InformNapalm to further explore the issue.

Judging by the data from the public rgistry (archive), Sergey Avakyan has farming land in the Novool’khovskiy village in Kuybyshevsky District of the Rostov Region of Russia.. 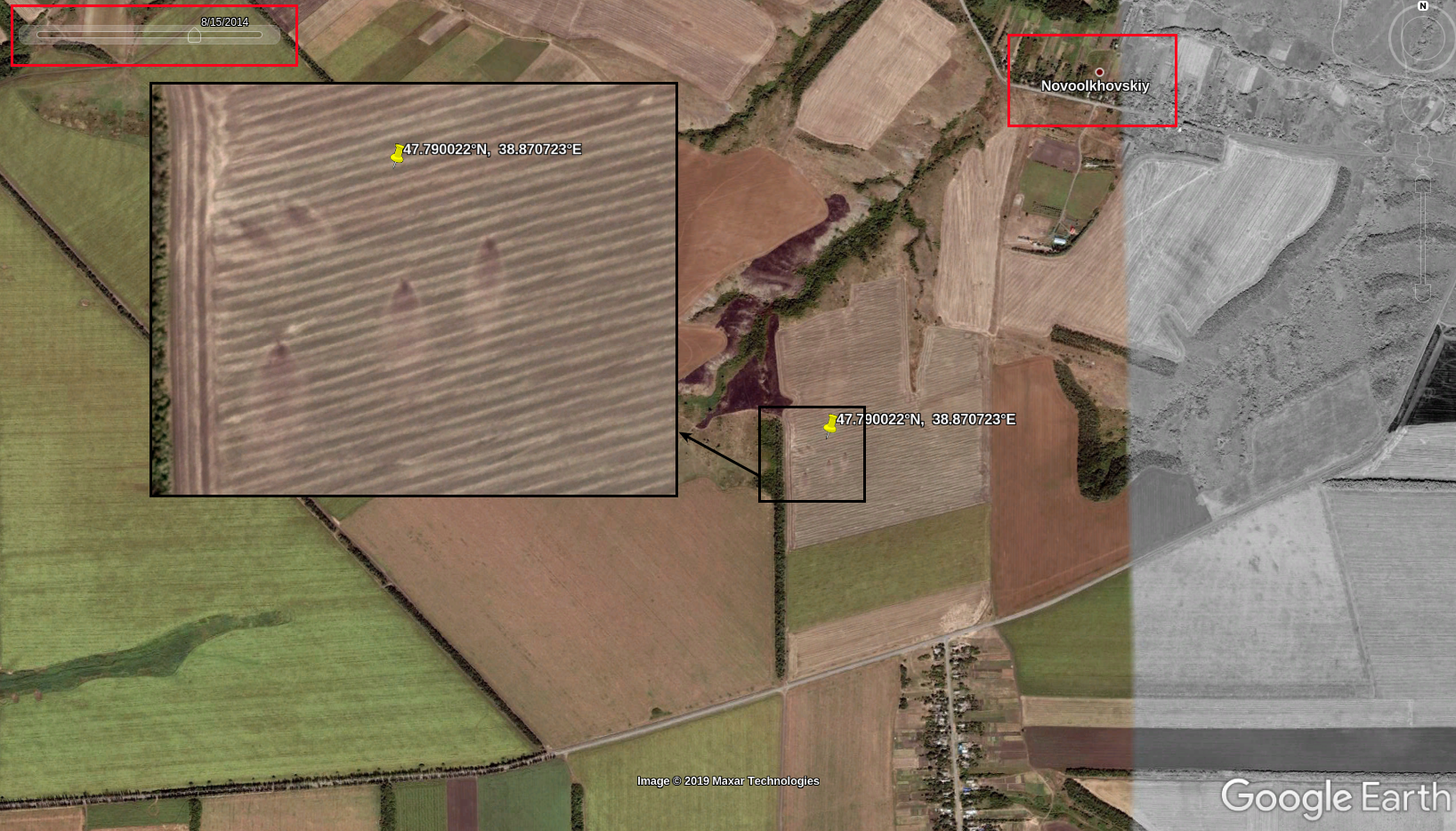 Moreover, in Russian police reported in August 2014 that they located unexploded ordnance on 3 occasions in the Kuibyshevsky District.

All this fits well into the general picture of the war crimes of the Russian troops. It was established that the Russian MLRS shot in two series from this field belonging to farmer Avakian. The first series of shelling was carried out in a north-western direction in the period from from July 16 to July 20, 2014. And the second – to the north in the period from August 02 to August 15, 2014. InformNapalm volunteers found craters from rocket explosions located in the firing direction, 16 km from the launch site. Coordinates: 47.935026, 38.881195 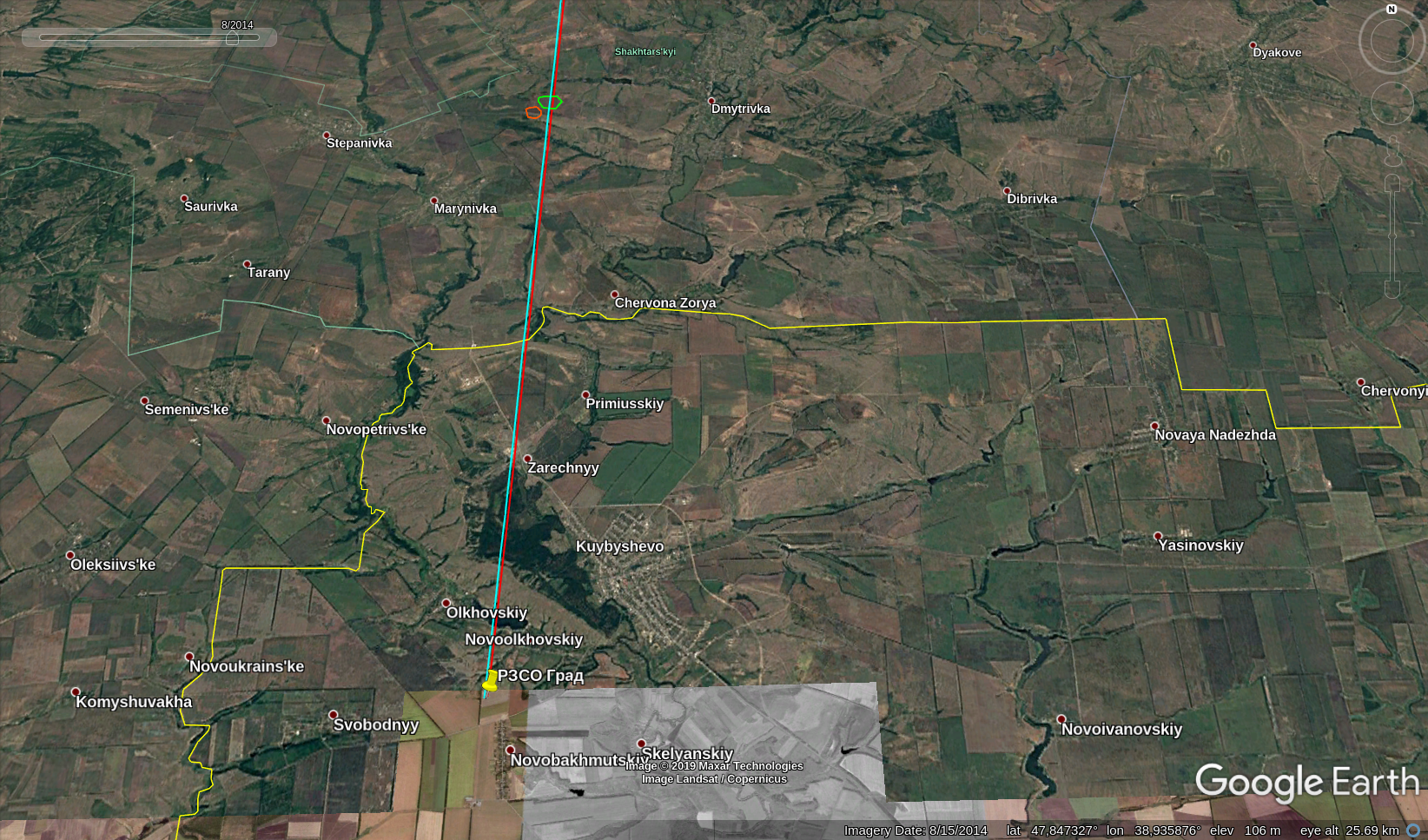 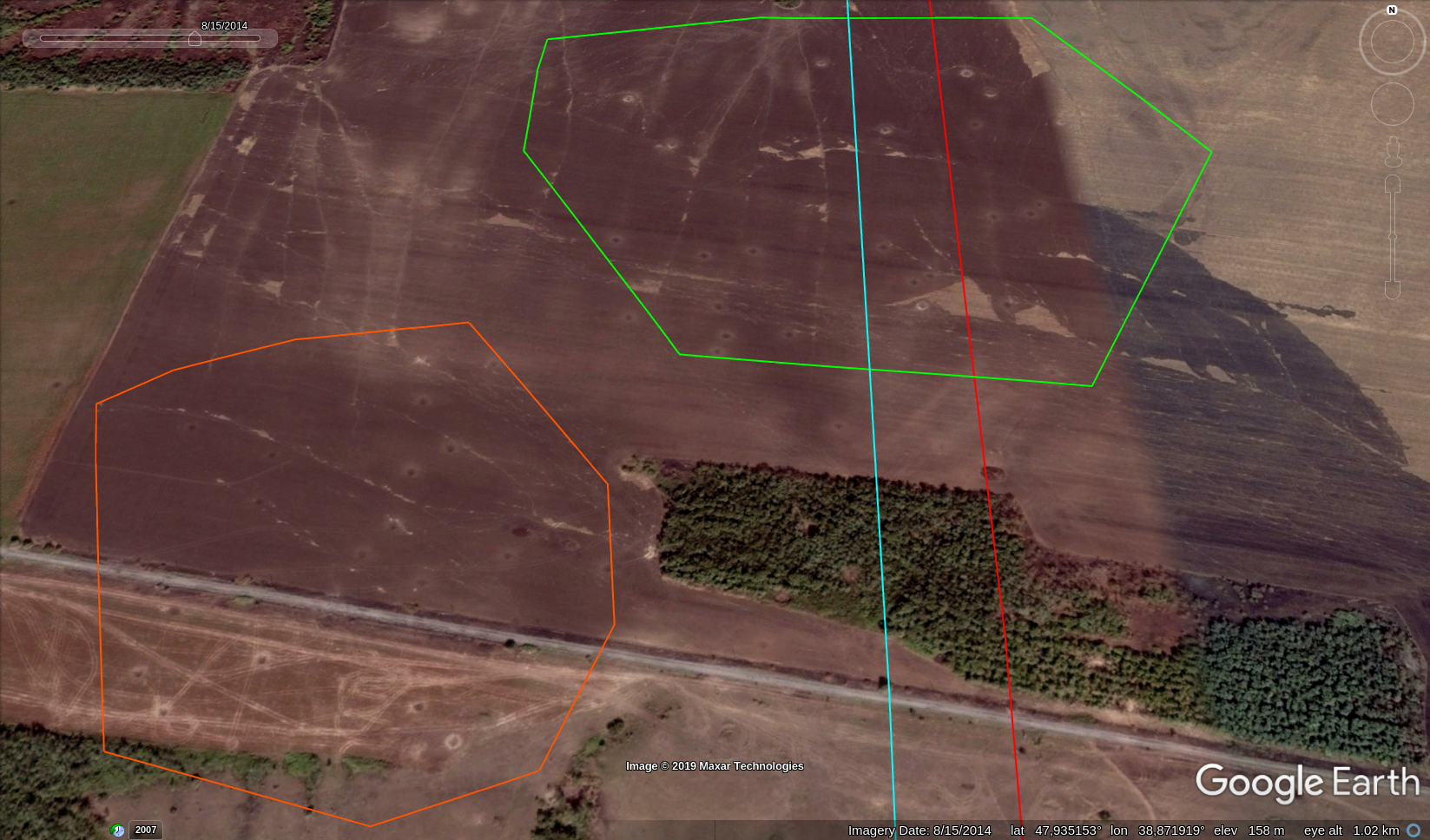 The official map of anti-terrorist operation of Ukraine (ATO) for August 05, 2014 confirms that the area near Dmytrivka village was shelled with Grad MLRS. 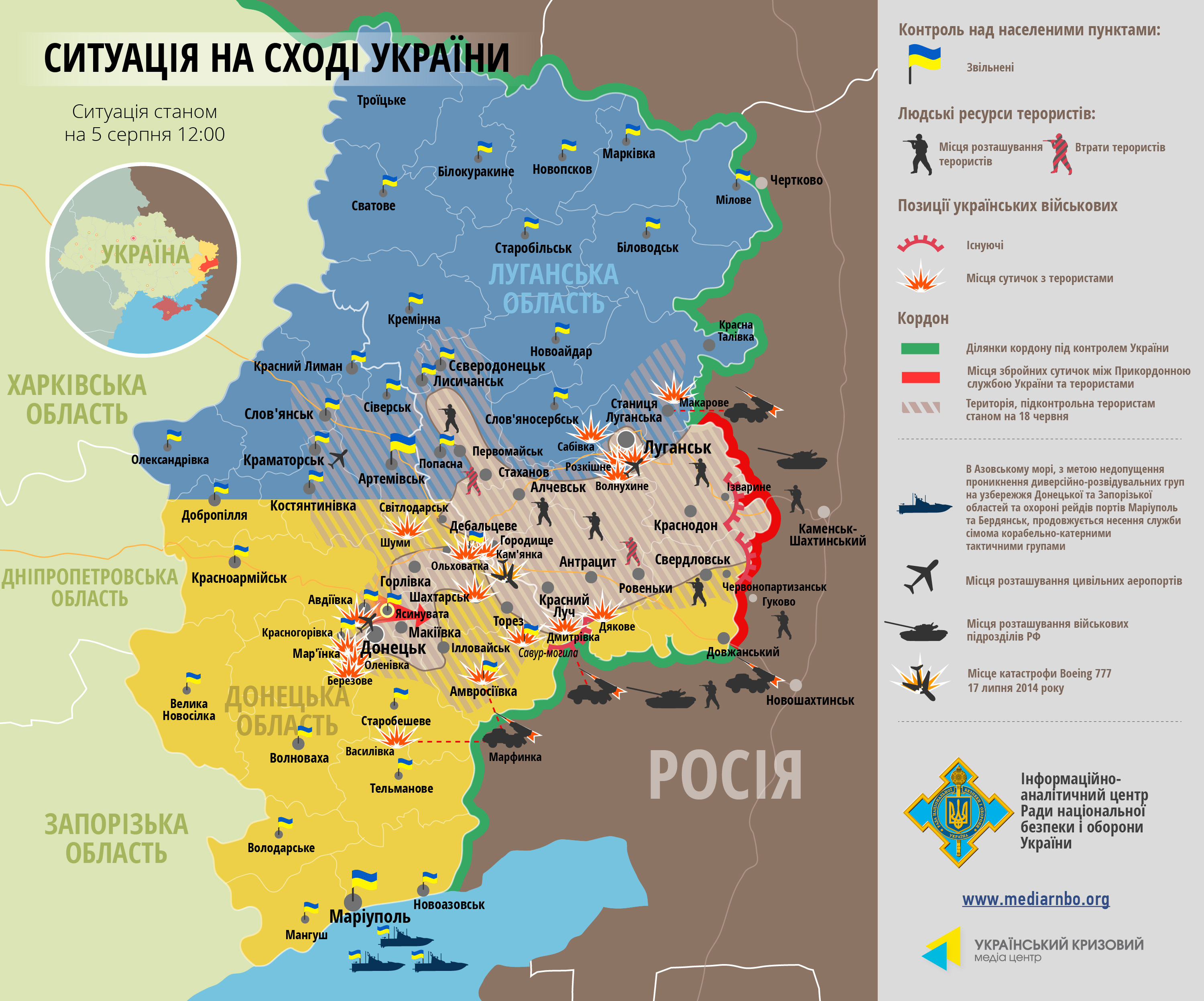 In August 2014, 95th Airmobile Brigade and 30 Mechanized Infantry Brigade of Ukraine carried out an operation in the region to unblock Ukrainian troops surrounded near Izvaryne (Luhansk Oblast). This operation is known as the “Raid of the 95th Brigade.”
In addition, according to the Lostarmor website, on August 15, 2014, a T-64BV tank with a side number “095” was destroyed near the area of the detected Grad craters. Interestingly, this tank had been captured by Ukrainian troops near Slovyansk from Russian militants, its old side number was “7”. Apparently, the Russians fired from their territory aiming at the soldiers form 95th and 30th Brigades of the Armed Forces of Ukraine. This version is also corroborated by the fact that 10 Ukrainian servicemen from the 30th Mechanized Infantry Brigade were killed in action on August 13, 2014 near the village of Stepanivka.

Of course, shelling of the territory of Ukraine was carried out not by paratroopers, but by the artillery assets of other military units of the Russian Armed Forces. However, this Russian propaganda video and the interview of the farmer, which he gave in August 2019, helped expose another war crime of the Russian army against Ukraine. Let us recall that in 2016, InformNapalm published photographic evidence of the participation of the MLRS of the 18-й Motorized Rifle Brigade of the Russian Armed Forces in cross-border artillery attacks on Ukraine form the Rostov Region of Russia.

Read more about the participation of the Russian Army in the aggression against Ukraine:

This publication was prepared by InformNapalm Mikhail Kuznetsov specially for InformNapalm volunteer intelligence community. Distribution and reprint with reference to the source are welcome! (Creative Commons — Attribution 4.0 International — CC BY 4.0) Follow InformNapalm on
Facebook / Twitter / Telegram Contact us and get updates about new investigations. Repost and share with friends!

No Responses to “Cross-border shelling: Russian aggression against Ukraine exposed by a farmer’s interview for Russian TV”