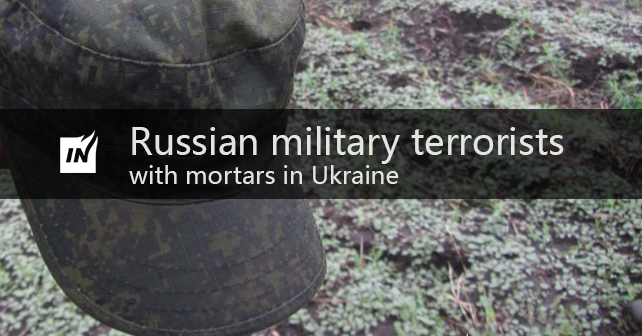 The kidnapping by the Russian Federal Security Service (FSB) of Yevgej Panov, a former employee of Zaporizhia Nuclear Power Plant, and the accusations against him of preparing terrorist acts on the territory of the occupied Crimea, gained enormous international public resonance. A number of politicians and public figures from around the world saw this Russian propaganda operation as an artificial casus belli, and even compared it with the Gleiwitz incident that led to the Second World War. But if Russia artificially creates propaganda stories in order to accuse Ukraine of sabotage acts, Ukraine, for its part, can offer hundreds of instances of Russian aggression, including examples with Russian terrorists crossing the border armed with mortars to attack the positions of Ukrainian Army. This report covers one of such incidents.

It is based on the materials obtained from Lieutenant Viktor Mikhailyuk, the commander of the radiochemical and bacteriological reconnaissance platoon of the 79th Airmobile Brigade. It reveals the details of mortar attacks on Ukrainian troops by Russian Army raiding groups. The report includes photos that establish the locations of mortar teams, which crossed into the Ukrainian territory from Russia.

The first mortar attack on a command post of the 79th Brigade by Russian troops was carried out on the night of July, 1, 2014. That night the Russians fired fifteen 82 mm mortar shells at the post near Height 214.7 (coordinates 47.887803, 39.152806; marked on the diagram as A). After the attack, a mobile team was sent to search for enemy mortars. During the raid, they were located at the intersection of two windbreak lines (coordinates 47.877537, 39.186252; marked on the diagram as Z). It was on the territory of Ukraine, 2.5 km away from the brigade’s command post. The group also tracked the routes used by the Russian mortar units to cross the state border and return after the attack (marked with red and blue lines). Additionally, the locations B and C on the diagram specify the areas of mortar strikes, photographed that day by Viktor. 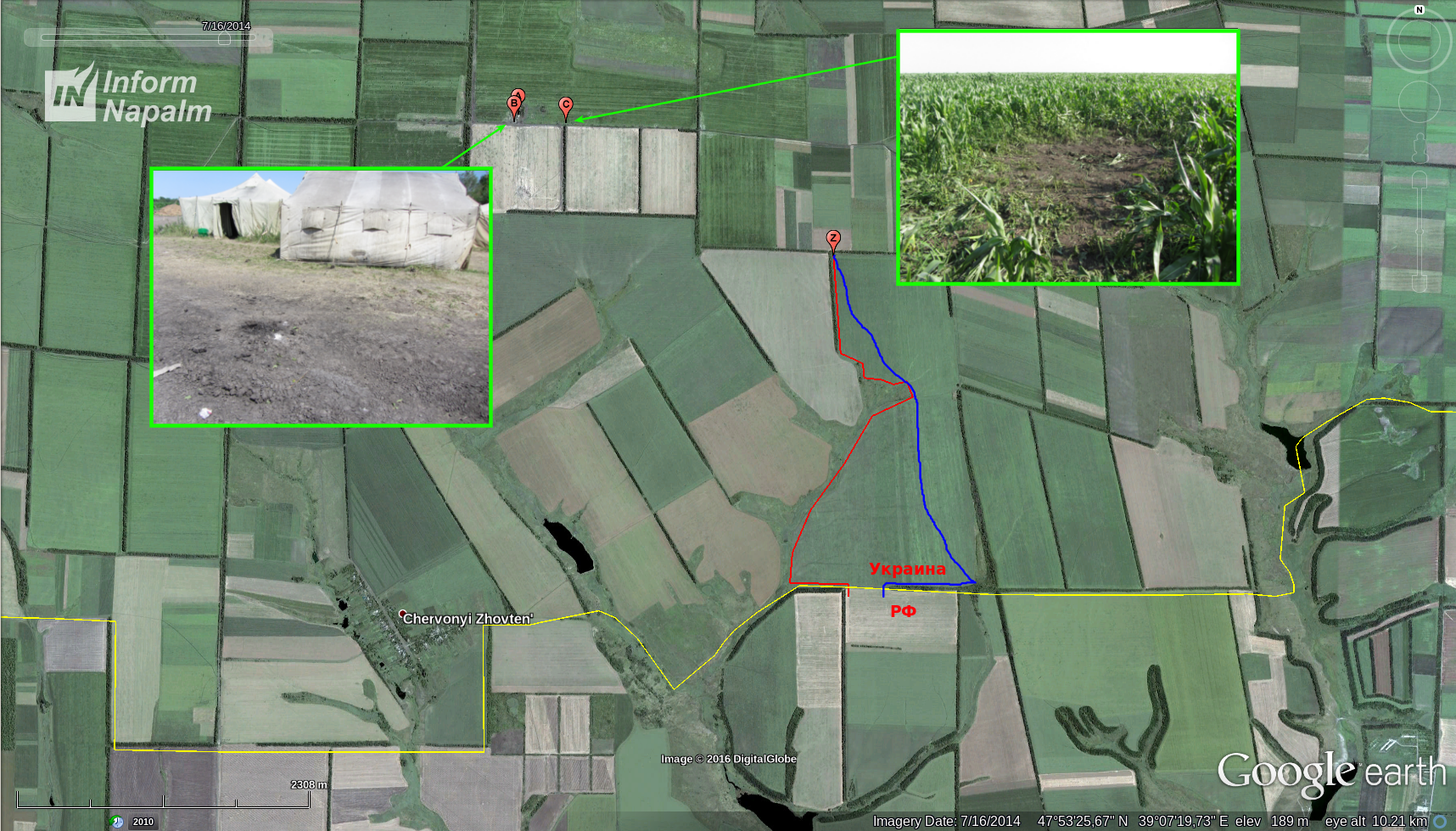 After the incident, additional secret posts were set up around the perimeter of the camp, at the distance of 3.5-4 km from the brigade’s command post. Viktor was a senior duty officer at one of them. The secret post was set up at the intersection of windbreaks (coordinates 47.877593, 39.197845; marked on the diagram below as A) and allowed for visual observation of the state border with Russia.

At the start of his shift on July 7, Viktor took several daytime pictures. When observing vehicle headlights at night, they could help him with location estimates. At about 01:00 on the morning of July 8, an observer noticed flashes of mortar fire. Viktor passed the information to the camp and received permission to return fire on the position of the Russian mortar unit (coordinates 47.856943, 39.195502; in the diagram below shown as Z). An AGS-17 automatic grenade launcher was used to fire at the enemy. Since its maximum range is 1,700 meters, and the distance to the mortar position was just over 2,000 meters, grenades fell in front of the enemy unit. This caused the Russian soldiers to cease the firing and start their hurried retreat back to Russia. Victor called for an artillery strike, but attacking the right location was impossible because of its close proximity to the Russian border (400 m). The shells could land in the Russian territory, which would be considered as an act of aggression by Ukraine. 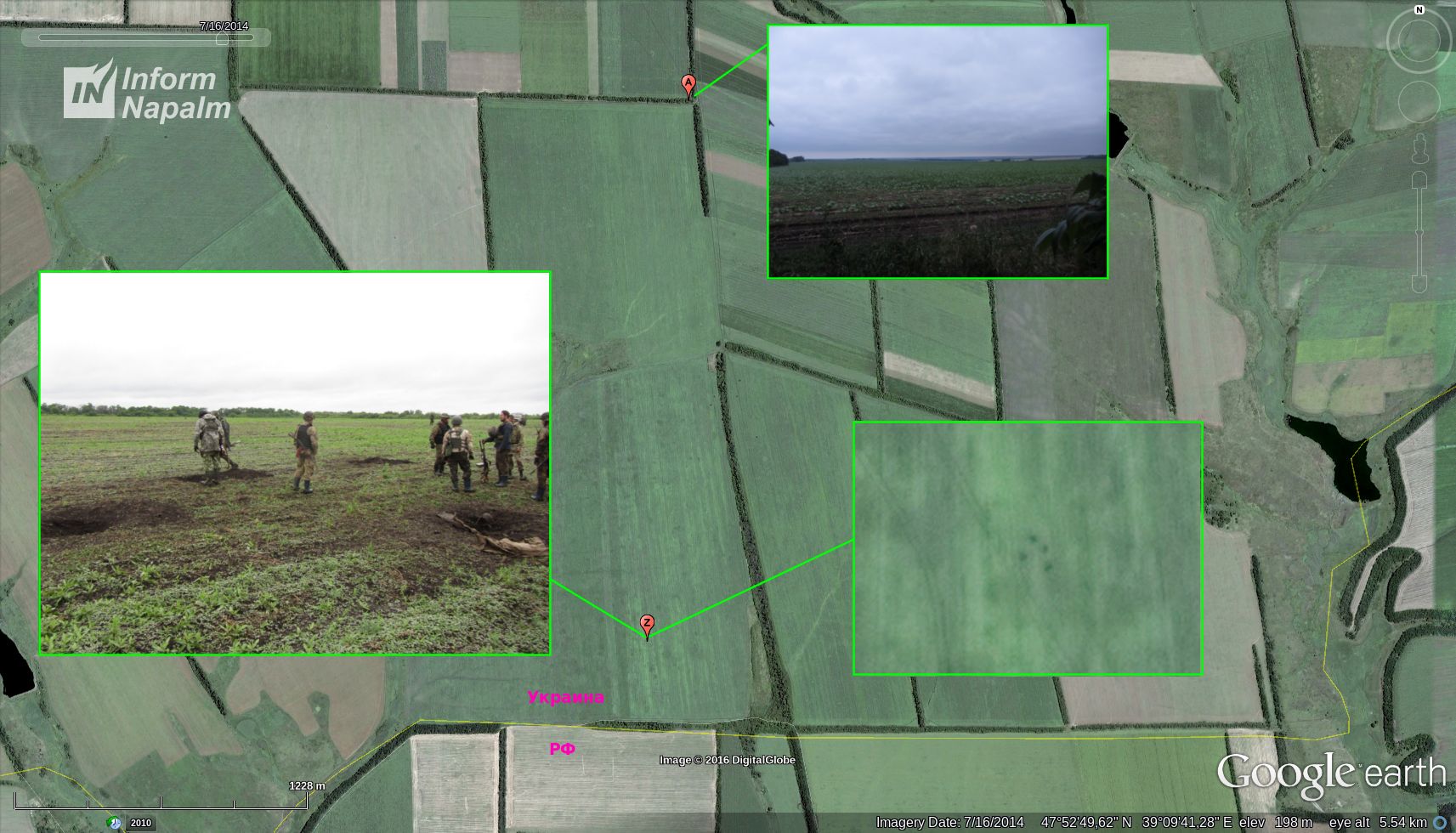 On the morning of July 8, the soldiers of the 79th Brigade on two BTRs and an UAZ SUV moved to the Russian position and found the traces of four 120-mm mortars. At the site they also found: a 120mm mortar plate (with painted number 8697) with army tent stakes attached to it for carrying, some personal belongings, shelter-halves, a pair of belts, covers with “flora” pattern, a cap with Russian camouflage pattern without a badge and a civilian rifle scope POSP3-9X42. 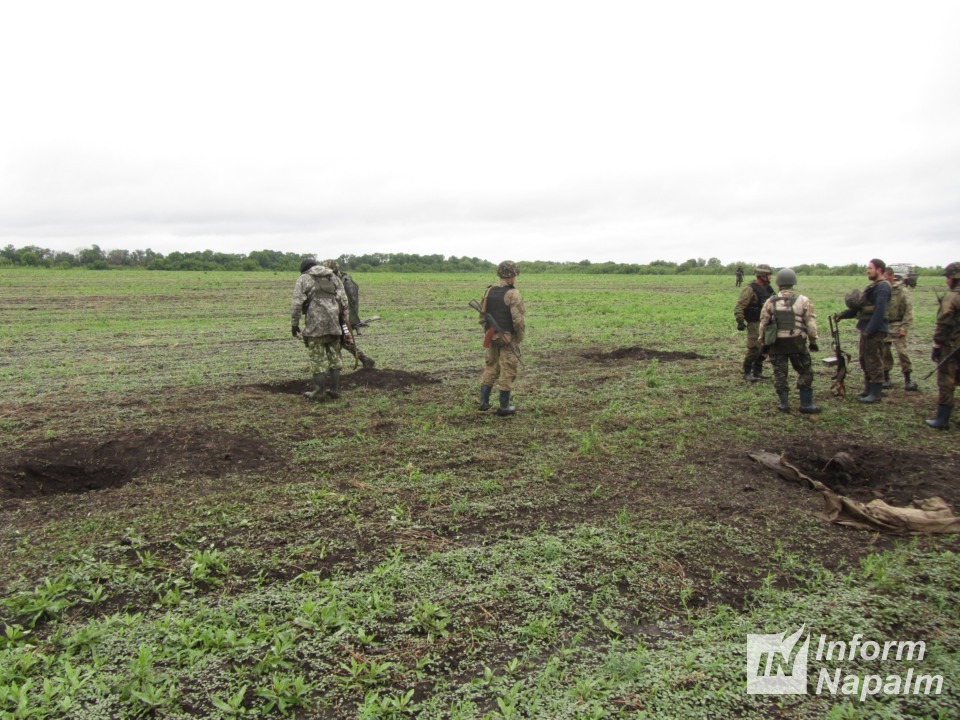 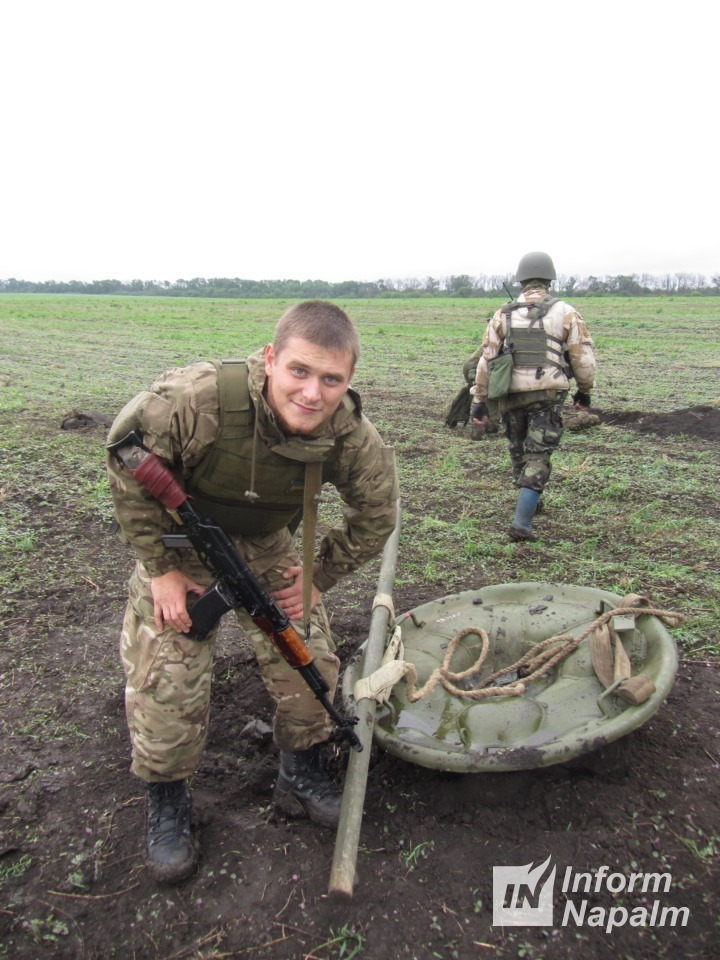 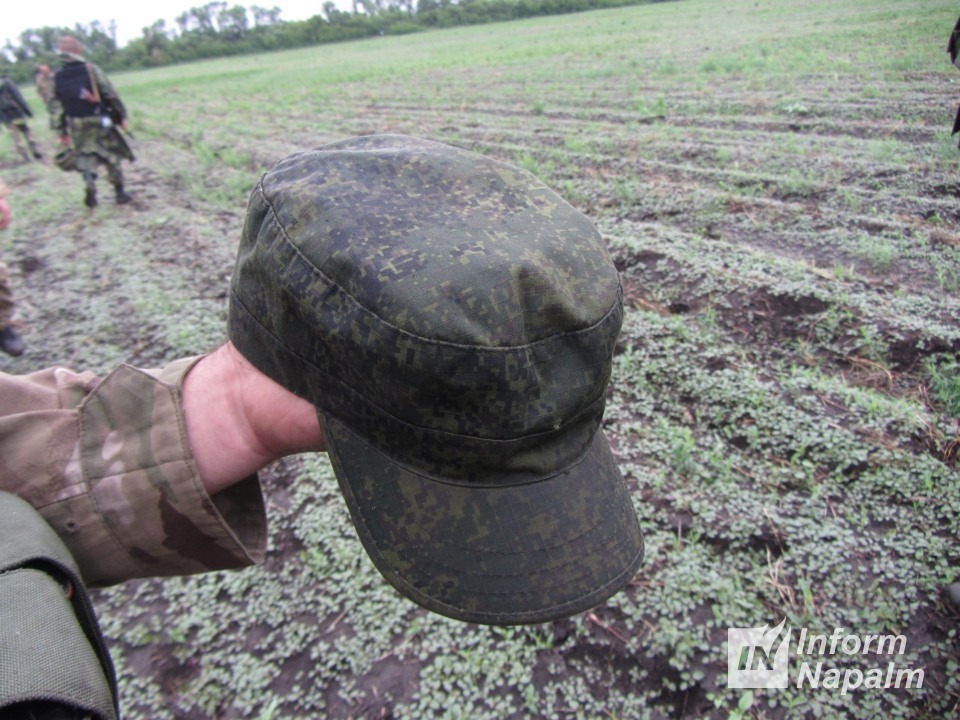 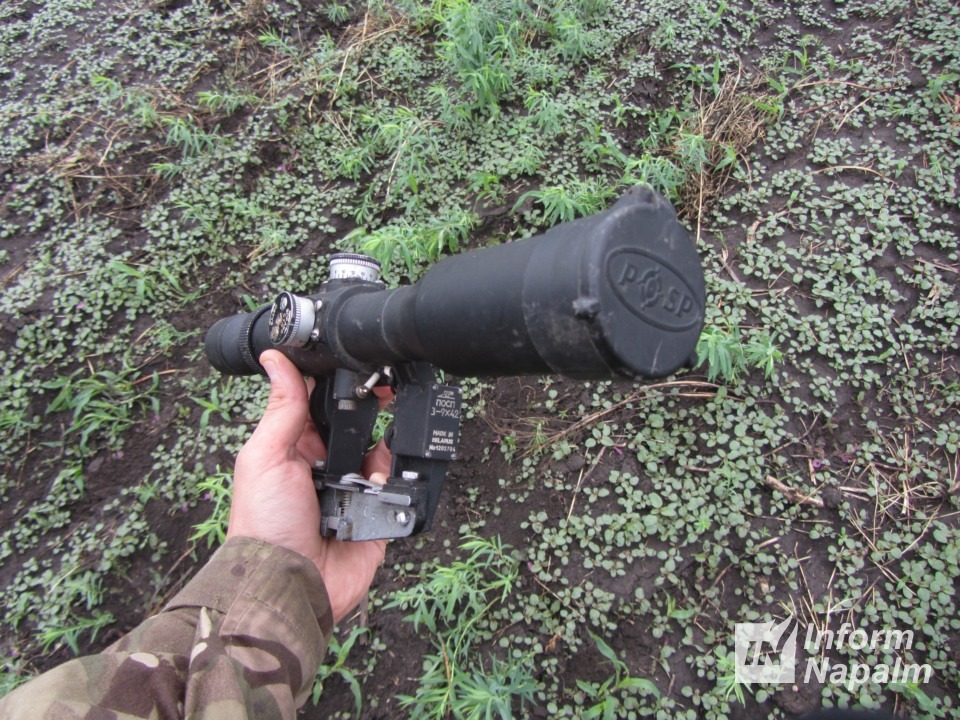 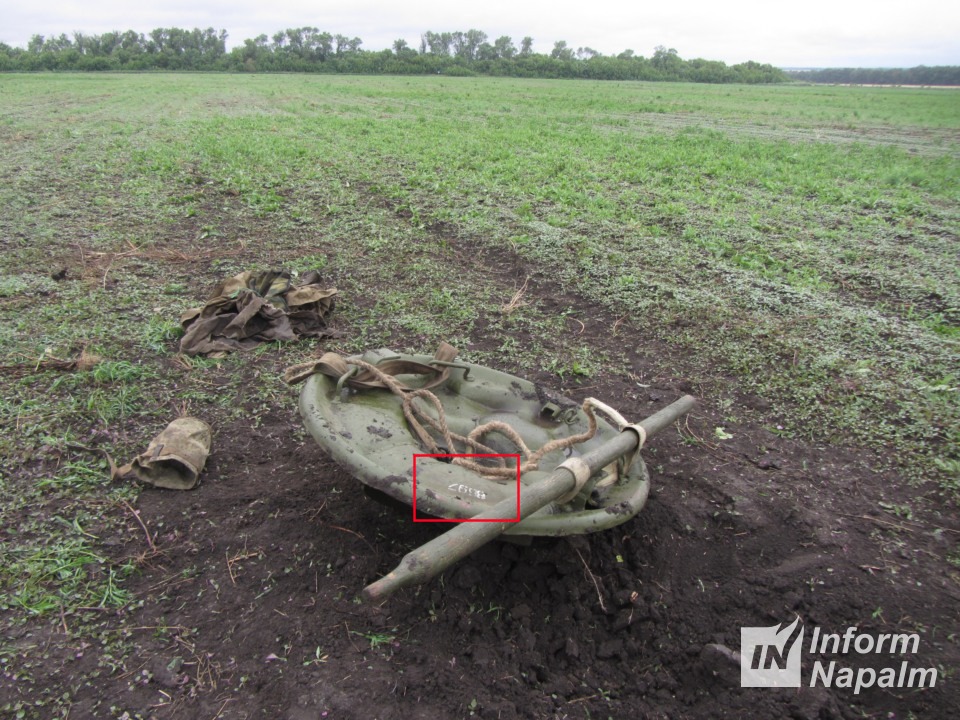 That morning was very wet because of the night rain, so distinct traces clearly indicated the place, where the Russian troops crossed into Ukraine. Also fresh tracks and two shelter-halves were found during the morning raid in the so-called zero-woodline zone (in the diagram this place is marked by H). 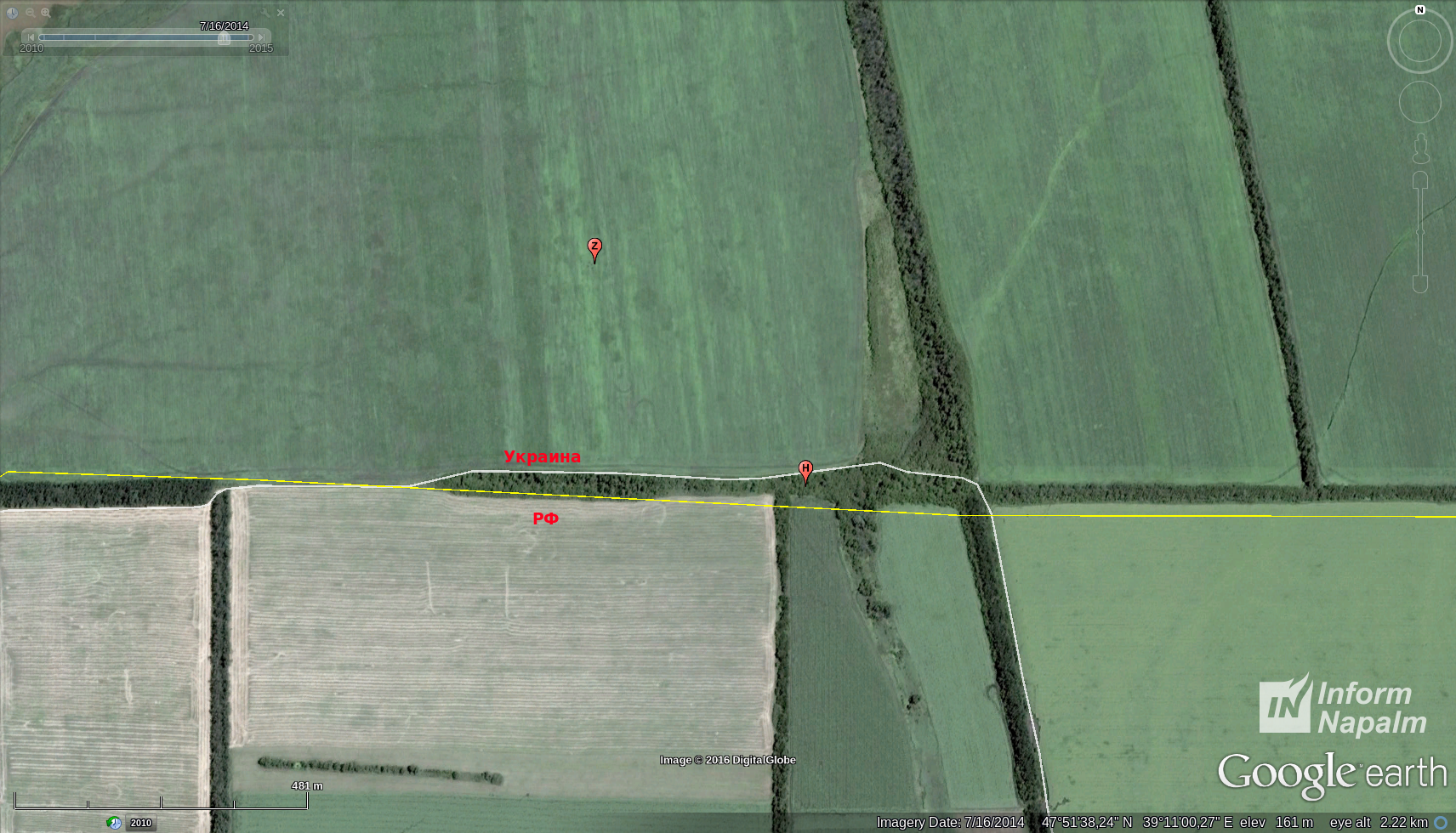 On a related note, recently the volunteers of InformNapalm published the investigation Russia Shelled Ukraine in August 2014. Satellite Images of 539 Craters Analyzed.

This publication was prepared by Michael Kuznetsov, a volunteer of InformNapalm.

(CC BY 4.0) The article specifically prepared for  InformNapalm.org, an active link to our project is obligatory for any reprint or further use of the material.