Russia As Sponsor of Terrorism 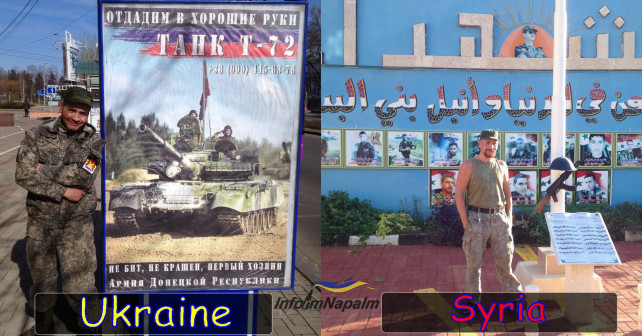 During new OSINT investigation and studying of profiles of the Russian mercenaries, the volunteers of the InformNapalm community found evidence of deployment of the Russian terrorist-mercenaries from the war in Ukraine to Syria.

Mercenary Bushkov Valery Georgievich (born on April 10, 1985) is a Russian citizen and lives in Ukhta (the Komi Republic, Russian Federation). He is married and has a child. Valery has taken part in the hostilities in Donbas at least starting from the winter of 2014-2015. He used to ‘protect the Russian world’, kill Ukrainians in their territory and terrorize the peaceful population of the Eastern Ukraine. Being in Donbas, Bushkov was in the ranks of the terrorist group of the Russian occupation forces named ‘Sparta battalion’. This unit was based in the center of Donetsk, in the territory of the Donetsk National Technical University.

The photo below (uploaded on October 2) shows a page in his passport with the Syrian visa. And a couple of months later, on December 5, Bushkov took a picture in front of a Memorial in Tartus (Syria).

A photo taken in the city of Donetsk, at the intersection of the Shevchenko boulevard and Artem street (Google street view) 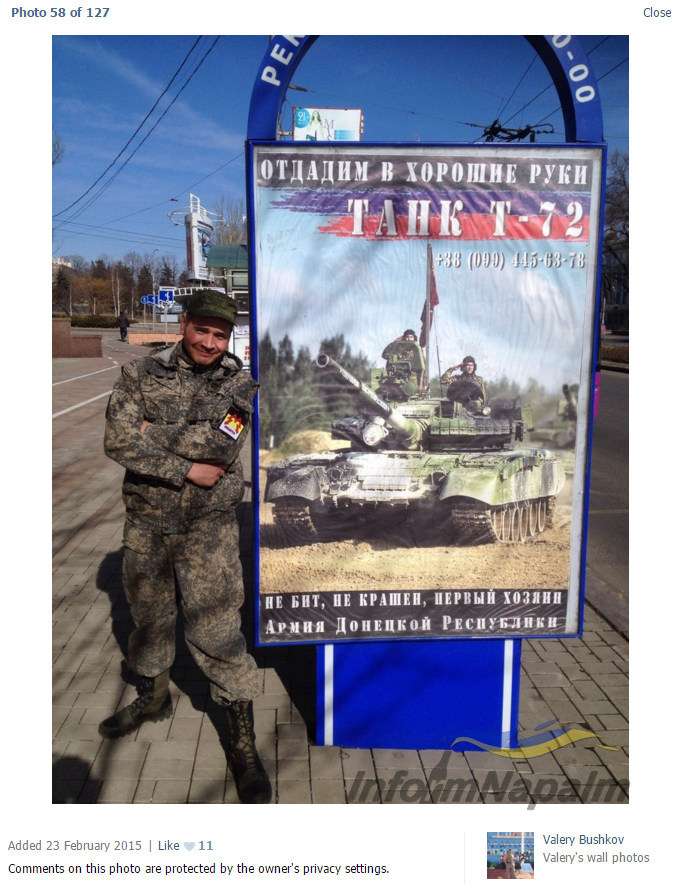 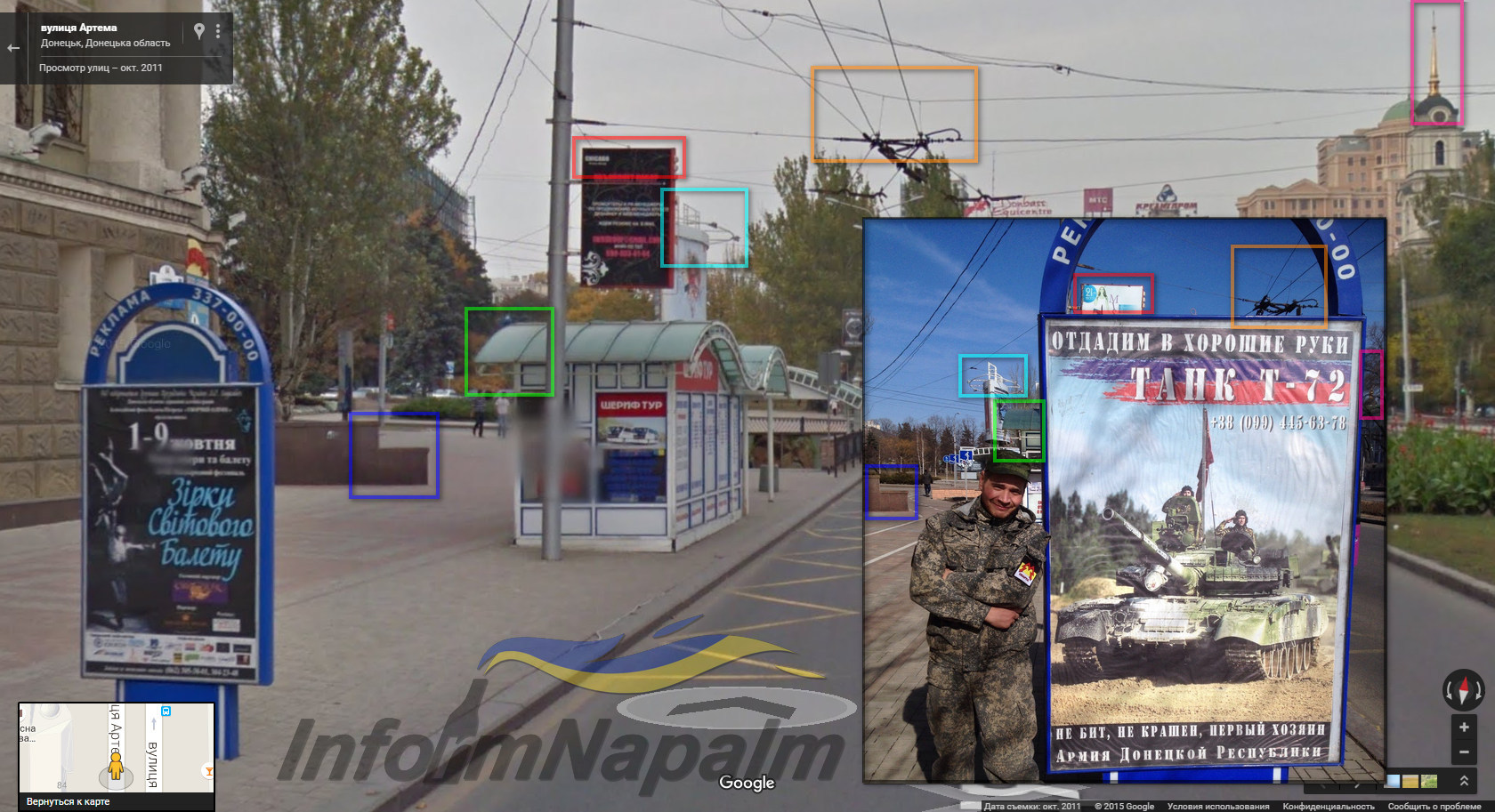 A photo with ‘Vodyanoi’ character was also taken in Donetsk. 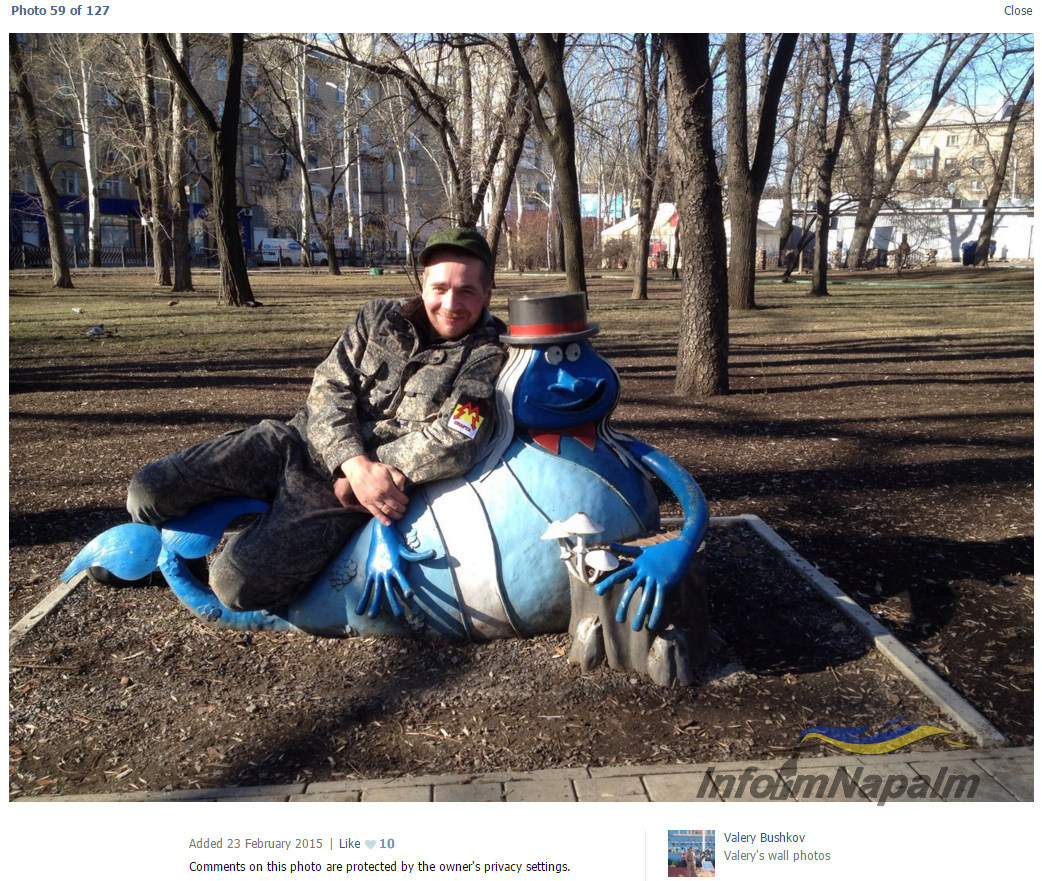 A photo made at the Azov sea shore, near Bezimenne village (Novoazovsk raion, Donetsk Oblast, Ukraine). 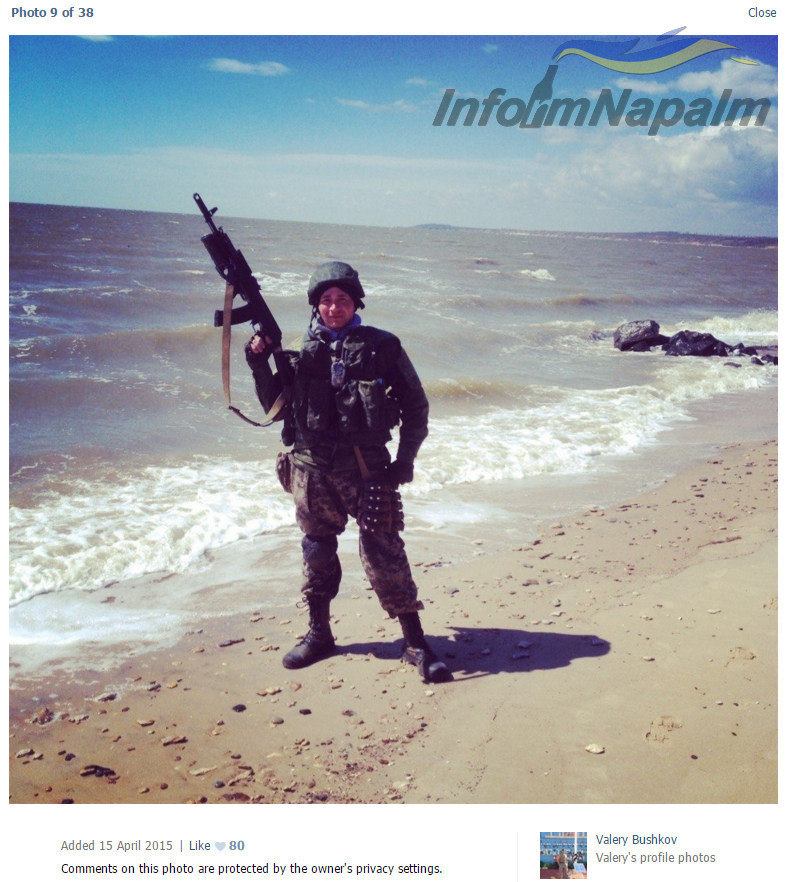 A photo with Arseny Pavlov, callsign ‘Motorola’, the commander of the ‘Sparta’ terrorist battalion. 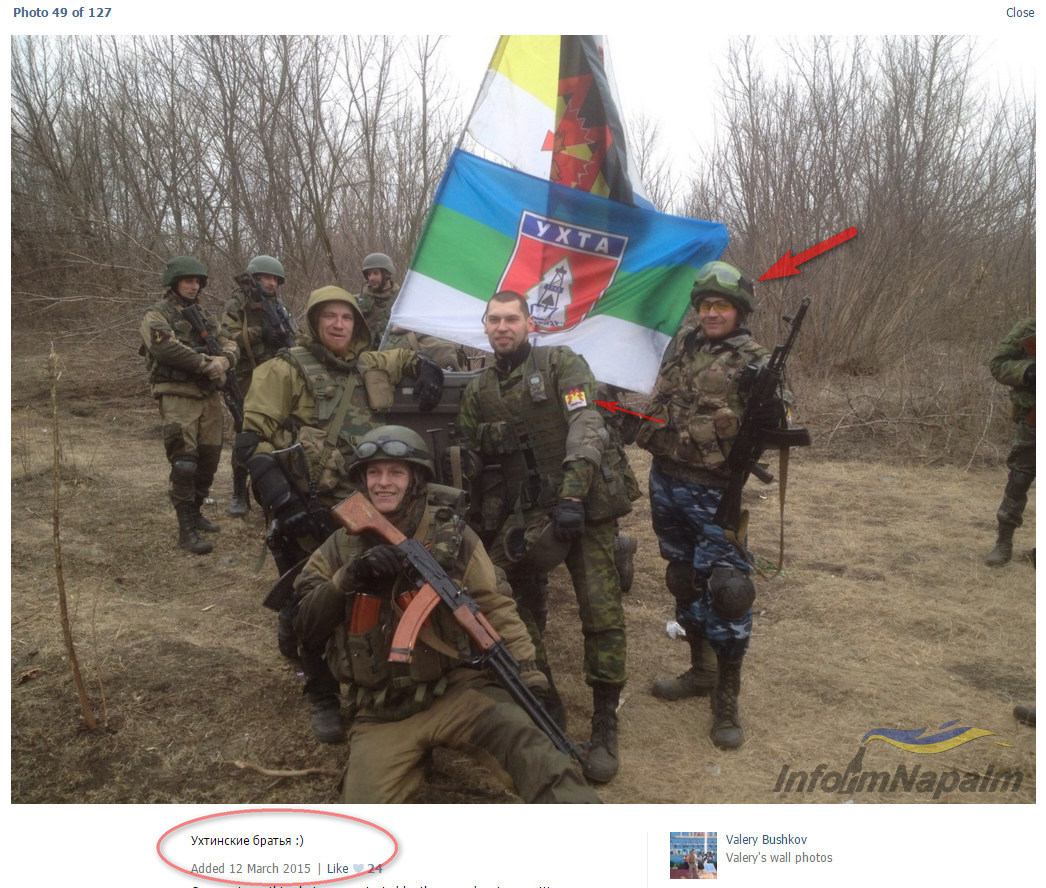 A group photo with his brothers-in-arms. 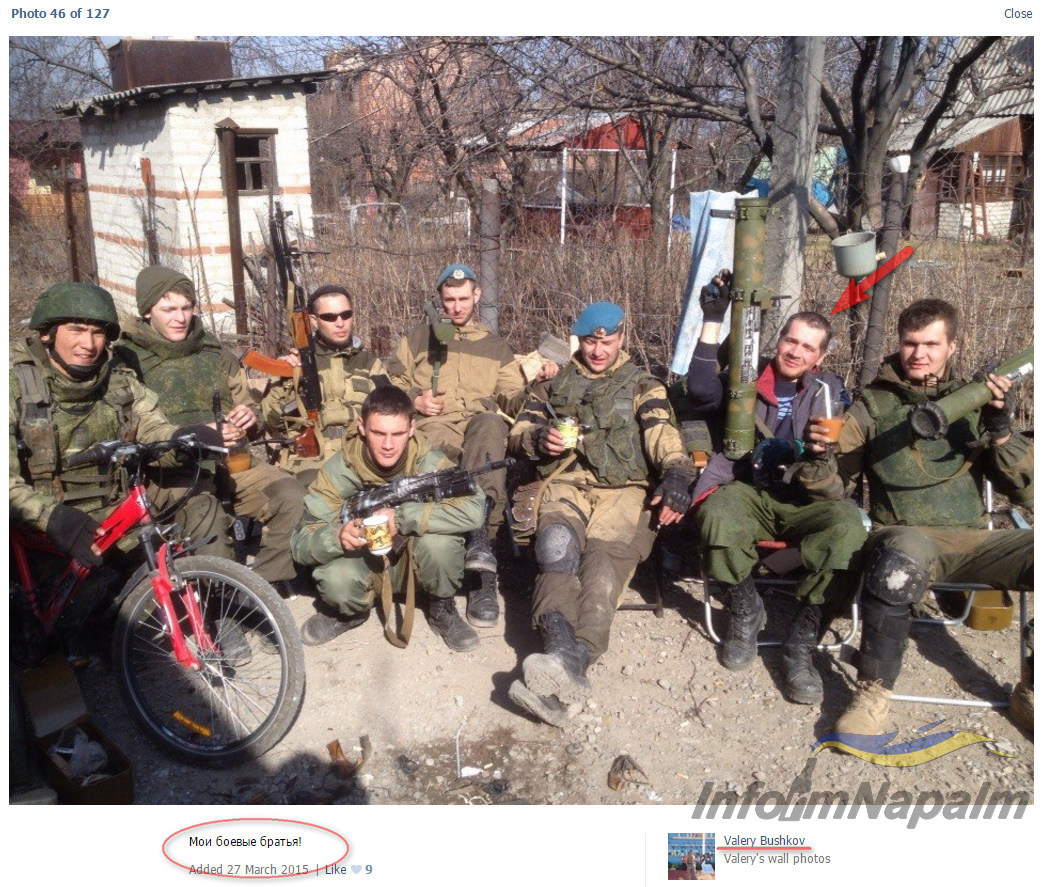 The military registration card of Bushkov Valery, issued by the ‘DPR’ terrorist organization. 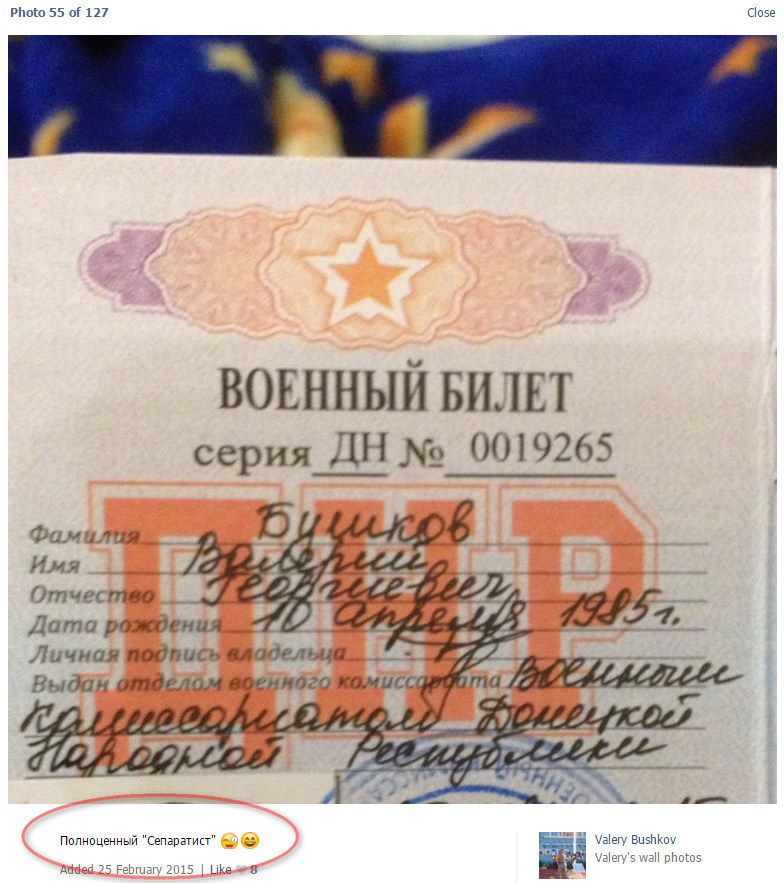 A photo published in Valery’s social profile on October 2, 2015. The comment under the picture says “Visa is ready, the airstairs are waiting, my brothers are here, god bless us”. Are these the same brothers-in-arms from the photo above? 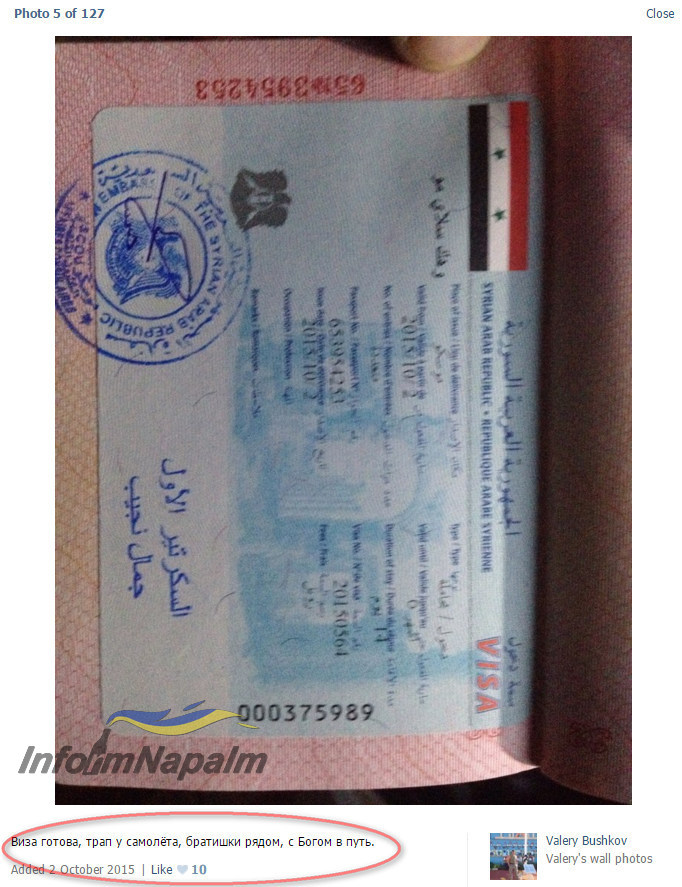 One of the last pictures of Bushkov. Valery in close up. 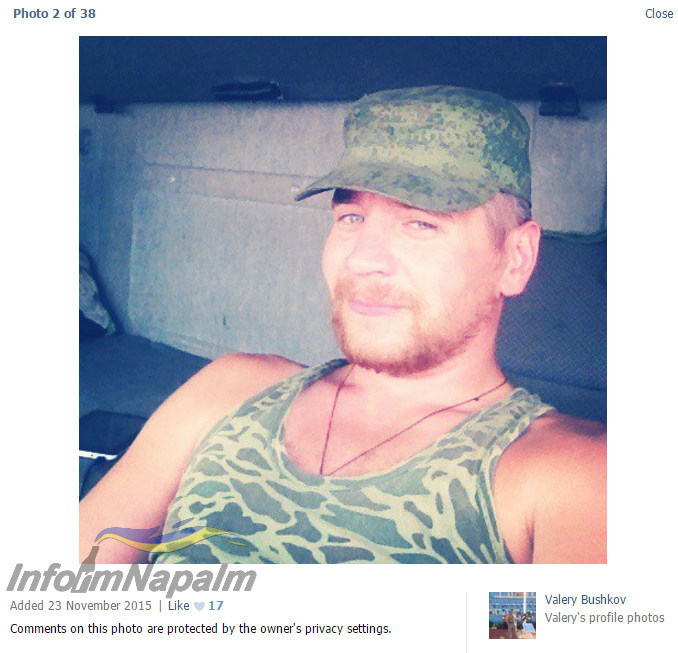 Another photo from Syria with an interesting comment. “Will you stand up and protect your country if enemy comes?”, asked the mercenary who was killing Ukrainians in Donbas for a year. Now the same kind of terrorists have arrived to Syria, so the peaceful locals will be killed here as well. The poster on a pylon is intended to remind a feat by an Assad’s army serviceman killed by the rebels. 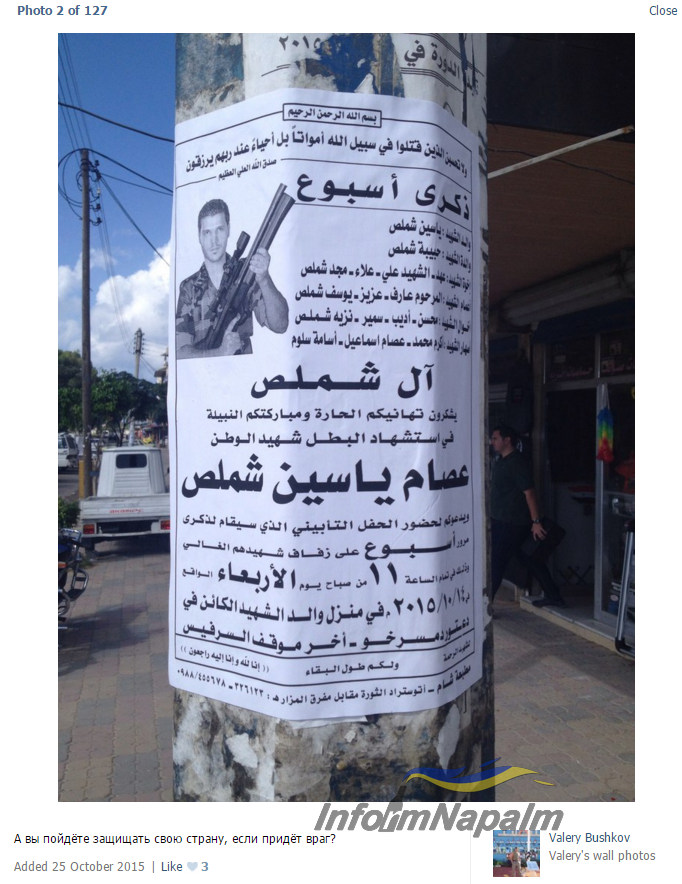 This is a photo taken in front of the Memorial to the soldiers who died protecting Assad’s regime. It is located near a logistics center of the Russian Navy in Tartus. 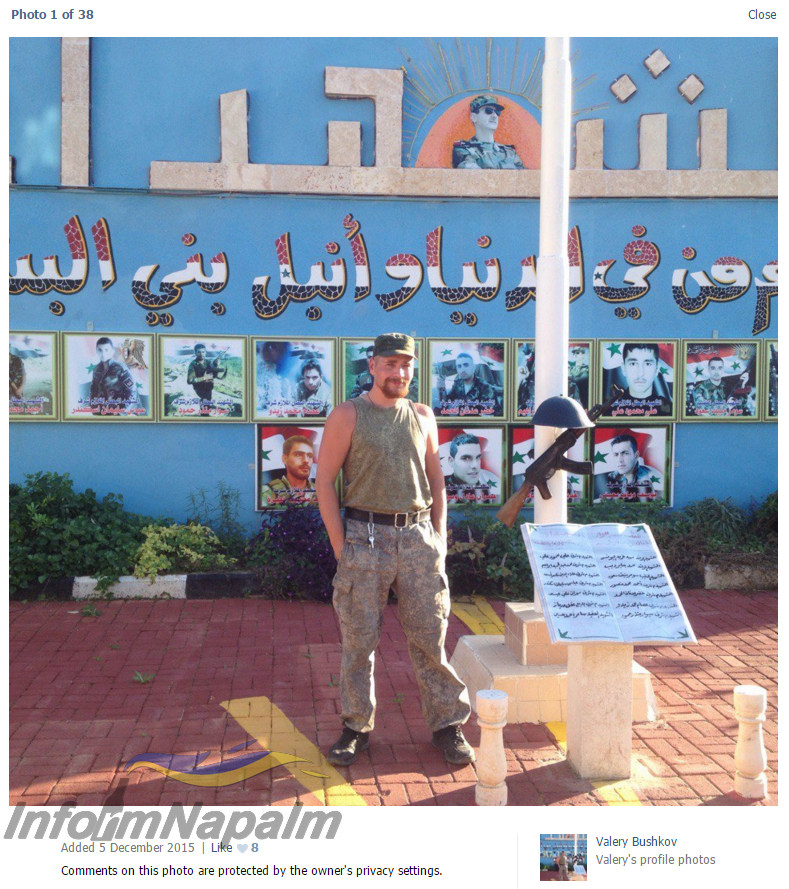 Below you can see another and more detailed picture of this Memorial. This picture was NOT made by Bushkov. 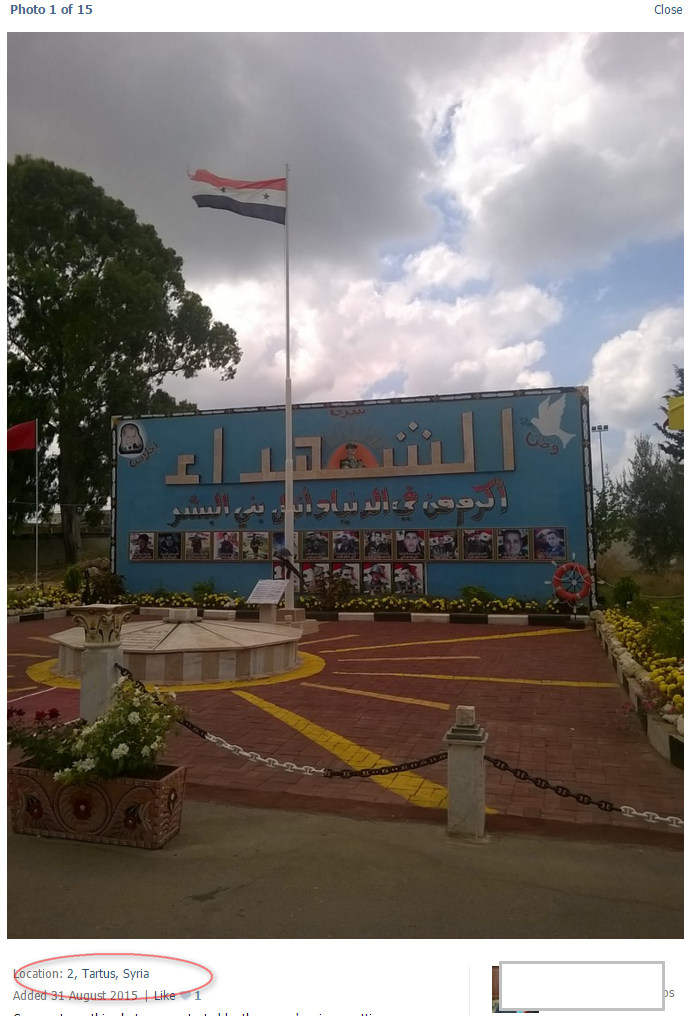 A picture in front of Mi-24 attack/transport helicopter with side number ’24’, taken on the military base in Latakia. The photo has been removed from the profile, but here you can check it out in details.

A picture from the Russian media for comparison and the helicopter identification. 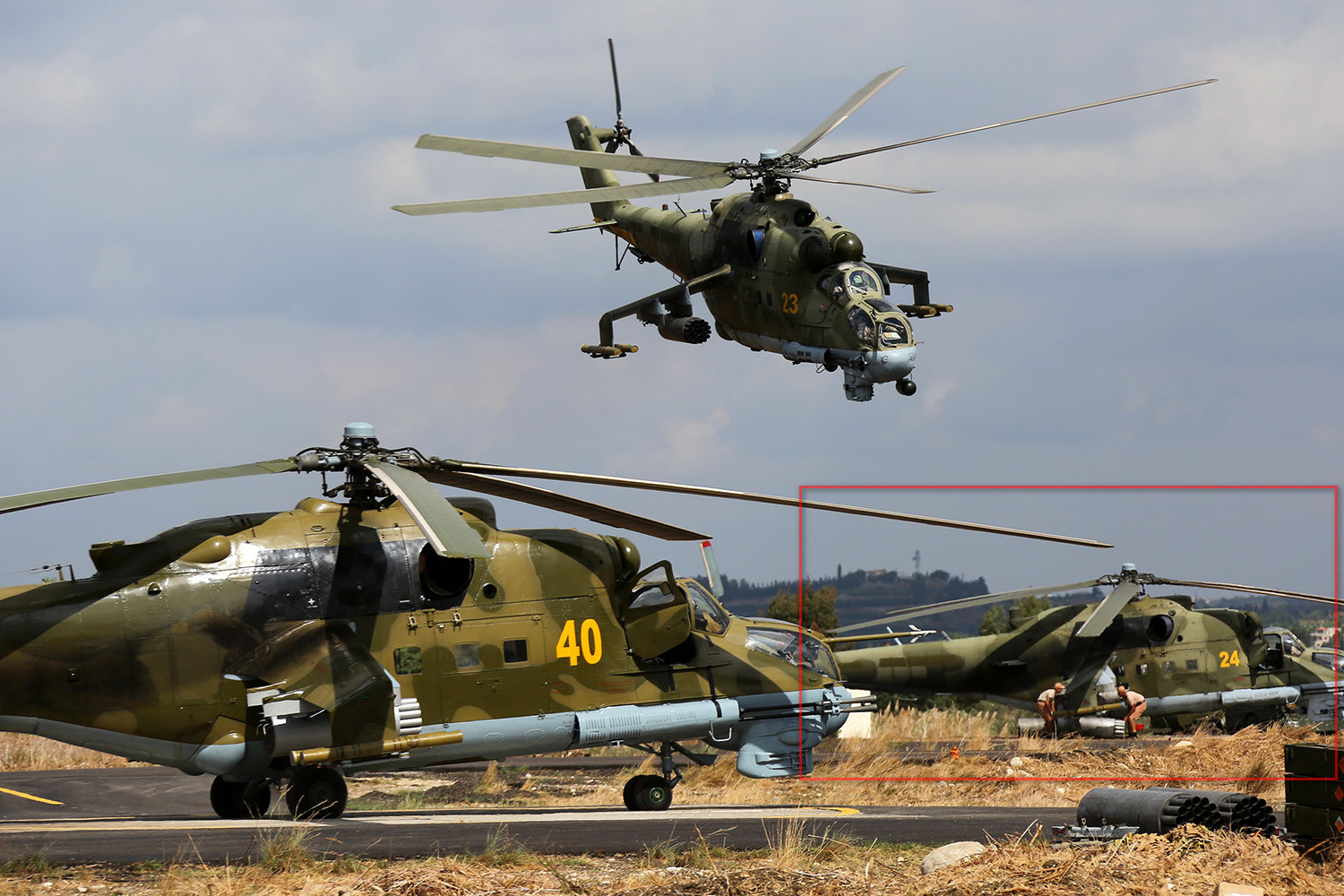 This is the same helicopter on the same place but with partly hidden side number (a slide from RT channel’s footage). 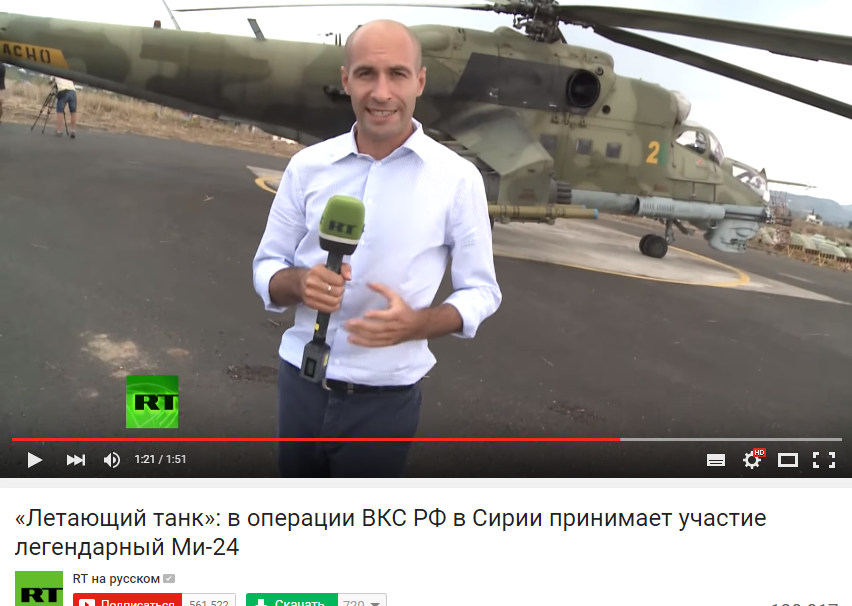 And this is what awaits for Syria. The Kremlin tries to implement ‘Novorossiya’ project in Ukraine. The ‘NovoRosSYRIA’ project is prepared for Syria. That is correct – why should they invent anything new if the same tricks can work for years – same names, same faces in the ‘local militia’. 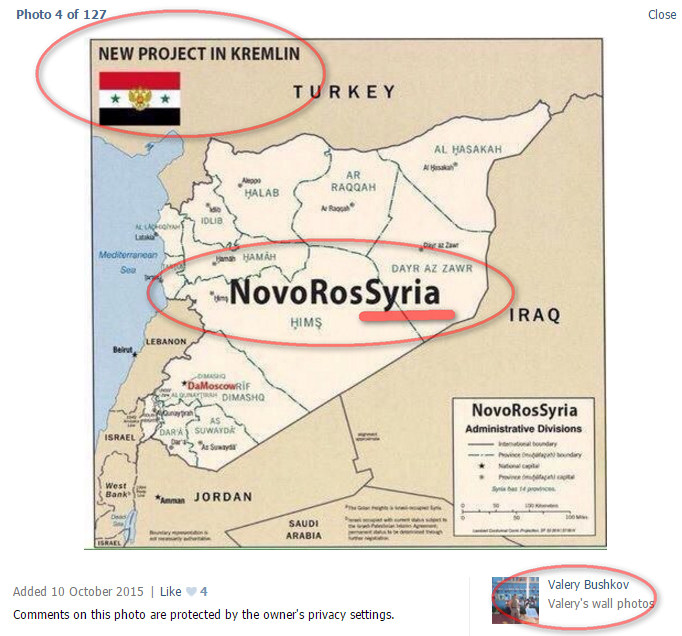 Having investigated the evidence of this person’s involvement in the armed conflicts in different countries, we can state that Russia is an aggressive formation and a sponsor of terrorism, which tries to justify its actions by some ideological concept named ‘Russian world’. STOP! What kind of a ‘Russian world’ can be in Syria? There are almost no Slavic people, and the Russians are only at the military bases. So, whom Bushkov and his brothers-in-arms have come to protect in Syria? The answer is simple – he is a common mercenary. It doesn’t matter for such people where and whom to kill. Price is the only question. And they will fight in any place and under any name – ‘coal miners-separatists’, ‘rebels’, ‘militants’, etc.

Most of such Russian terrorist-mercenaries (and all the adepts of the ‘Russian world’) are religious and mad about the Orthodox Christianity. Or just use this cover. Or are the victims of unstoppable aggressive Russian propaganda which lasts for decades. Even the last homeless person in Russia has ‘imperial ambitions’, and talks about the glory of Russia.

It should be mentioned that such ideological concepts like ‘Russian world’ (additionally based on religion) look like the Islamic terrorism, whose most known terrorist organization ‘Islamic State’ (ISIS) is located in Syria. The circle has been closed, two ‘religions’ (Orthodox and Islamic terrorism) have met each other in the same state. They protect their ‘worlds’, hold the line against the Western world, and kill people all over the world. The striking similarity of interests, don’t you think so?

And finally, the mercenary-terrorists freely moving through different countries and easily visiting the Russian military bases in Syria can be called the worldwide terror controlled by the Russian Federation (‘Russia’, ‘Moskovia’, ‘prison of nations’, etc .).

One Response to “Russia As Sponsor of Terrorism”