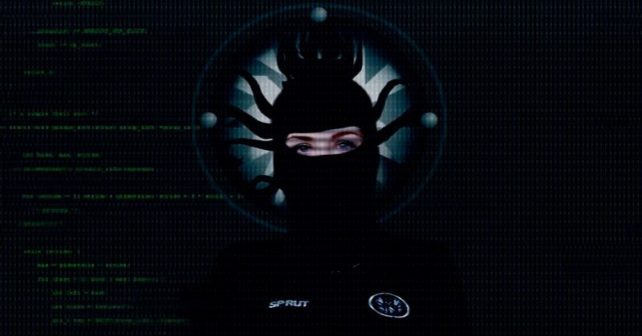 On July 31, Russian blogosphere exploded after a series of hacks of accounts of Anatoly Nesmiyan a popular blogger-militarist aka el_murid (El Murid) a member of the far-right Anti-Ukrainian organization “Committee of January 25”. Maxim Kalashnikov an ally of El Murid 24 hours after the hack said that the blocking of the accounts was a personal political revenge from Russian presidential assistant Vladislav Surkov and that the persecution of the blogger was a consequence of his sharp criticism of the Russian authorities on a number of issues including the war in Syria. 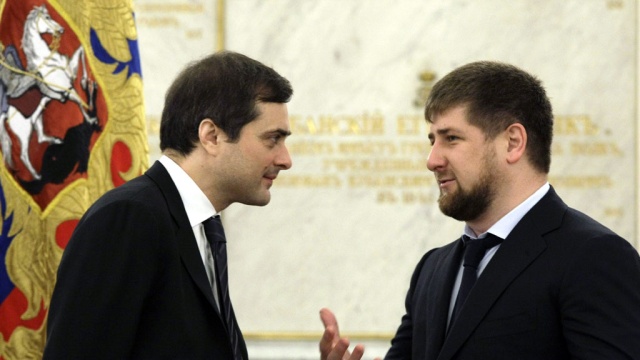 Background information on the “Committee of January 25”

Anatoly Nesmiyan had a paid account and held 53rd place in the overall ranking of LiveJournal bloggers.  In recent years he has been writing on geopolitics including the wars in Syria and Ukraine. He sharply criticized the leadership and the entire military-political system of Russian Federation. Nesmiyan is a co-founder of the Committee of January 25 organization together with the Russian terrorist Igor Girkin aka Strelkov who was actively involved in the annexation of the Crimea and the invasion in Donbas. The Committee of January 25 also includes many odious mavericks across the whole political spectrum – from the far right monarchists to outright stalinists.

In January 2016 the Russian Gazeta.ru, wrote about this newly established association:

“Russian nationalists and stalinists rally around the ideas of Novorossia. The creation of the Committee of January 25 chaired by Igor Strelkov former Defense Minister of Donetsk Peoples’ Republic (DPR) was announced in Moscow This organization is currently more of an information sharing and communication platform, but in the future its founders plan to engage in “gathering of the Russian lands” in Belarus, Ukraine and Kazakhstan and building of the Russian national state. Constituent meeting of the Committee of January 25 was conducted by the representatives of “patriotic” community: editor-in-chief of the nationalist Sputnik and Pogrom Egor Prosvirnin, the founder of the National Democratic Party Konstantin Krylov, the leader of the National Bolshevik Party Eduard Limonov,  stalinist writer Maxim Kalashnikov, stalinist blogger Kungurov and orientalist Anatoly Nesmiyan aka El Murid”.

Versions of the hack and political revenge

Readers of El Murid started with blaming the hack of his blog with the activity Ukrainian hacktivists and even named the alleged Lviv IP-address of the hackers. However the evidence appeared to be flawed. In turn, cyber-alliance of Ukrainian hacktivists who often take responsibility for hacking websites and accounts of Russian propagandists pointed to the uncustomary style of the hack and suggested that it was a provocation of Russian secret services.

Readers got suspicious at the lack of response of site administration of LiveJournal, a Russian blogging platform, to complaints of the blog owner. It felt like the site was following orders to strip the page.  The next day El Murid wrote in the blog of his wife:

“El Murid leaves LiveJouurnal. It is hardly a joyful event, but in the end there was little other choice. The problem is not even hacking of my blog but the policy of SUP [Editor’s note: SUP media is the owner of the LiveJournal site]. Almost immediately after I lost control over my account, I sent a message to the LiveJournal site support, but after more than half-a-day got only silence in response.

With such a rotten attitude I see no sense in staying on LiveJournal. Even if my journal is restored somehow, I will not come back anyway…”

The veil of mystery began to lift in the morning of August 1, when the the reasons of the hack were posted on El Murid’s blog: Russian hackers from the SPRUT group accused Anatoly Nesmiyan in pseudo-patriotism and working for United States. Another post that came up in his blog mocks the “Committee of 25” and alludes, that the members of the committee start their Monday mornings with “the cookies from US Department of State”.

In addition a report about the operation was published on the SPRUT page on VKontakte social network. 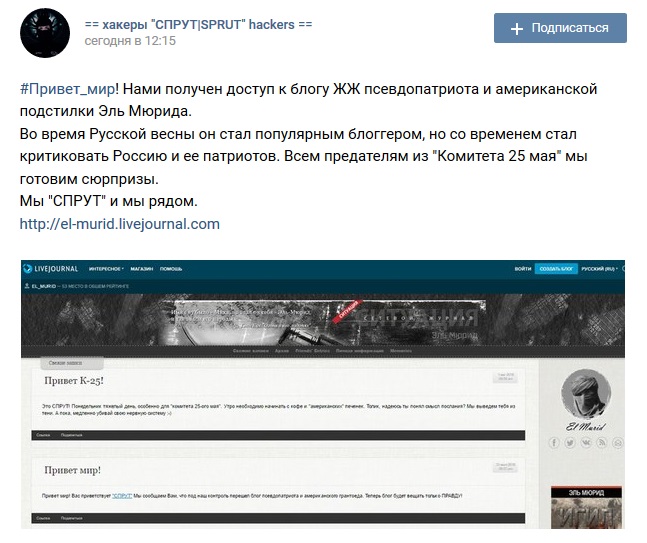 Later, hackers made another post with screenshots of the hacked correspondence of El Murid with a comment:

“Thus began the recruitment of Anatoly Evgenievich Nesmiyan (aka blogger El_murid) by US intelligence agencies. Of course, through good intentions and shared ideas. “

The text of the letter mentions Boris Zeldovich an academic of Russian origin who works in the US who allegedly passed a sum of money to “Strelok” (capitalized  “Strelok” most probably refers to the terrorist Igor Girkin-Strelkov – editor’s note).
Russian hackers suggested that this was an evidence of recruitment by United States, though in this case it was perhaps only personal financial donation from an American professor to a Russian terrorist and former employee of the Russian intel agencies. 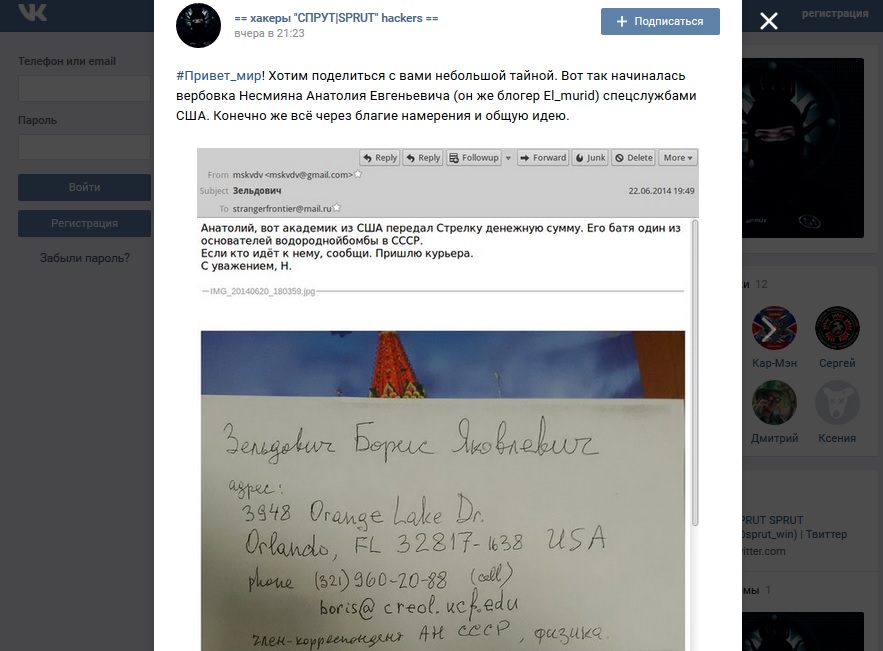 It is noteworthy that the group of hackers is thought to be affiliated with the Federal Security Service of the Samara Region of Russia. It was known only by a series of minor operations, most of which were attacks on the site of the Lviv Regional State Administration in Ukraine.

Maxim Kalashnikov, an ally of Anatoly Nesmiyan at the Committee also reacted to the hacking of his comrade’s blog.  In his article “On the destruction of the blog of El Murid” on the Novorossia Movement of Igor Strelkov website he said that the SPRUT hacker group is was on payroll of the propaganda department of the Russian Federation and was controlled personally by the presidential assistant Vladislav Surkov.

“Russian Spring, launched by officialdom as a distracting and propaganda exercise finally resulted in “Surkov’s spring”. Instead of prosperous Donbas, this Surkov-faced “spring” formed two ghettos where the life of Russians of the Donets Ridge turned into a hell. Moscow cowardly did not recognize LPR and DPR, unlike Abkhazia and South Ossetia. Reports from DPR and LPR come down to “media masturbation”. Now DPR is lead not by people like Pavel Gubarev, but by thuggish Zakharchenko, who is a former servant of Ukrainian oligarchs and until recently guarded Akhmetov’s property. Donbas became the disgrace of Moscow, from which it tried to escape by causing a Syrian adventure. A “strategy” of petty dirty tricks will not save Russian Federation from the systemic crisis. I despise and detest “patriots on payroll”. The orders that they obey is a further proof of the fact that their owners are fucked up and brought the country to a dead end.
I also thought at first that the “hard-line ukies” (translator’s note: Ukrainians) hacked El Murid and blamed it on SPRUT. But I see that I was wrong. The agony of the old system, incapable to deal with the economic crisis and pulling of Russia in pointless and expensive Syrian war results in senseless convulsions”- summed up Maxim Kalashnikov. 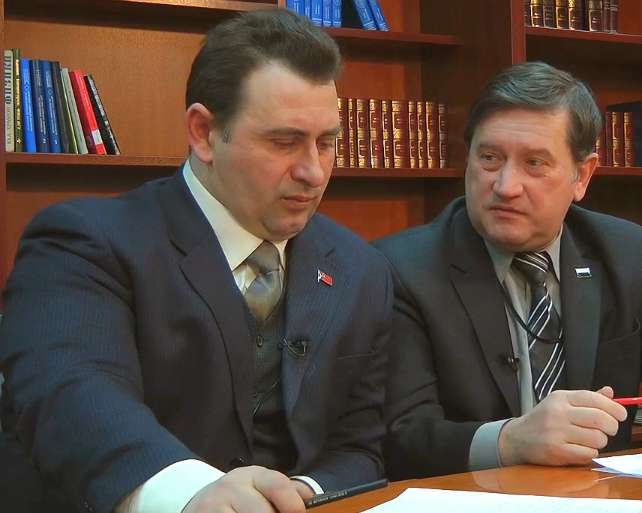 In the photo: Maxim Kalashnikov (left) and Vladimir Khomyakov, chairman of the People’s Cathedral movement on the National Question show

The consequences of the confrontation of members of the Committee of January 25 and presidential assistant Vladislav Surkov are still unclear, if there will be an exemplary flogging or situation will be put on the back burners. However, the rhetoric of Igor Girkin’s fan club leans towards dissatisfaction with the current Russian leadership and borders on calling for the Russian Maidan. But unlike the revolution in Ukraine, this one will not stand for democratic values. Instead, it will be for Faith, Stalin, Tsar (underline as applicable) and for the expansion of the Holy Empire”.

(CC BY 4.0) The article specifically prepared for InformNapalm.org, an active link to our project is obligatory for any reprint or further use of the material.

Don’t forget that the database of InformNapalm investigations to prove participation in the war in Ukraine of more than 70 military units of the Russian Armed Forces is available here: http://bit.ly/RussianPresence. We call on our readers to actively share our publications on social networks.