Document on disinformation operations against Ukraine handed over to the volunteers 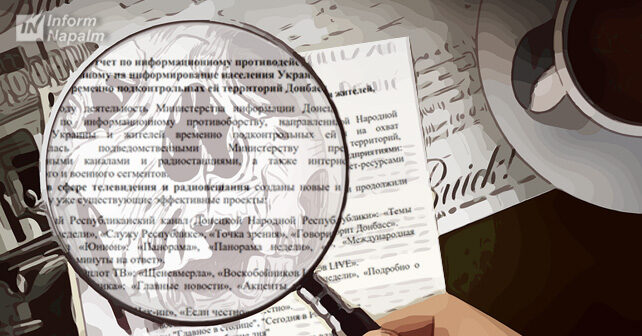 On December 23, volunteers of InformNapalm international intelligence community received an interesting electronic document from our regular readers from occupied Donetsk. It is laid out as a report on information countermeasures from the so-called DPR Ministry of Information supposedly to supervisors from the Russian intelligence agencies.

Although the so-called “Ministry of Information of the DPR” has repeatedly come into the focus of our journalistic investigations, including the case of a special topic of EgorovaLeaks based on the hacked correspondence of the “ministry”, we have not yet obtained any other similar intercepted documents. We always strive to verify information using several different sources. However, amid increasingly aggressive rhetoric of the top military and political leadership of the Russian Federation, the information provided may be of operational importance. Therefore we decided to publish it promptly, with a disclaimer “for consideration”. This information could become the missing piece in the jigsaw puzzle of the current information activity. Although we trust our sources, we cannot rule out that this document could be a piece of disinformation or a “controlled leak”. Please treat this document critically and with caution.

So what is this document about? It is a report on destructive information activities against Ukraine. It is titled as “Report on information countermeasures aimed at informing the population of Ukraine and residents of the territories of the Donbas temporarily controlled by Ukraine” for 2021.

According to our insider, the document reports on the fulfilled tasks assigned to the “ministry” by the supervisors from the Russian intelligence agencies. According to the report, the employees of “the ministry” undertook 53 active measures in 2021, which can be considered informational and psychological sabotage operations against Ukraine. The operation #54 is described as being on hold “pending special order”.

Items #49-54 are especially interesting. Apparently, the employees of the “ministry” significantly exaggerate he real effect or the coverage of their activities in the document. At times, they report posting materials on hacked websites, but this is not proved by any evidence – that is, they could be misleading their supervisors as well. Interestingly, in several paragraphs, the militants are probably simply attributing the processes that took place without their participation to themselves. For example, they listed the scandal with the ex-deputy of the Ministry of Internal Affairs of Ukraine. Obviously, this is a domestic Ukrainian issue, raised and untangled by the journalists, but the militants report that they also had a hand in it. They treat hype and fringe involvement in dynamic media processes and scandals as an opportunity to report them as their activities and ascribe the results to themselves.

Summing up, we could have put aside this document and take time to monitor further activity, using subsequent reports, but we were alarmed by the last item #54: “Fake information and staged photographs of the transfer by the Ukrainian Army and American / NATO professionals of chemical weapons to the area of the contact line and on preparation for its use against residents of the DPR have been created and prepared for publication (pending a special order).”

So far, we have heard only the provocative relevant statements of Sergey Shoigu, the Minister of Defense of the Russian Federation. It remains to be seen whether they will become a signal or a “special order” for action. Apart from numerous recent publications and informational “prelanding bombardment” in the Telegram channels, so far no additional “evidence” on this topic has come out. We believe that the materials of the report should be noted in the context of the statements of Shoigu and other media operations around the “chemical weapons”. Whether this report is a controlled leak or has real value for analysts and experts will probably be clear later.