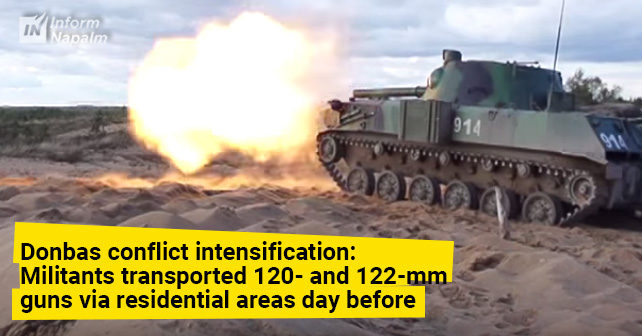 Russia’s hybrid troops had been preparing for the intensification of fighting in Donbas of January 24, 2020, for several days. This is the conclusion made as a result of the OSINT analysis by volunteers of InformNapalm. On January 22 and 23, on the eve of the assault, the militants had transported heavy artillery systems via residential areas of the occupied Donbas settlements.

It was stated in new OSCE SMM Report No. 19/2020 dated January 24 that three self-propelled 2S9 Nona-S (120 mm) mortars were seen driving westward in a residential area of Kyivskyi district of Donetsk.

It was evident from the data obtained from other sources that these guns were used to shell emplacements of the Ukrainian Army a day after.

It could be concluded on the basis of comments made by Donetsk locals in the social media on January 24 that the guns in question had not just been “driving”, but also had “worked” intensively. Thus, the Russian militants shelled the Ukrainian Army emplacements with gunfire in the evening of January 24 using, for instance, 120-mm 2S9 Nona-S mortars. Comment screenshots were published by Obozrevatel website. 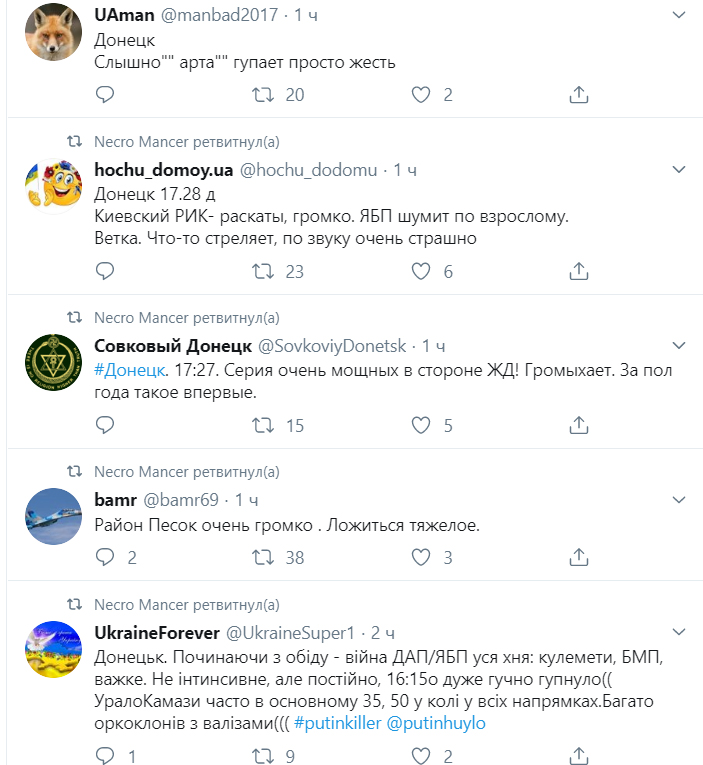 These data are confirmed by the morning JFO bulletin of January 25, 2020. We quote here the most interesting details correlated with the above-mentioned OSCE SMM report about the movements of the militants’ artillery.

– near Orikhove with 9 rounds from 122-mm artillery systems”.

It is worth mentioning that the JFO bulletin has been writing about shelling “near Orikhove” for a number of days; to provide perspective, Orikhove is merely 3 km away from the force separation area in Zolote.

Now, we have the context for reading the OSCE SMM report that mentioned 3 D-30 howitzers towed near Perevalsk of Luhansk Oblast on January 22 (however, they forgot to state in the report an important detail that these were 122-mm howitzers); we can see, however, that 122-mm artillery systems shelled Orikhove (near Zolote).

Having analyzed the OSCE reports with details dated January 22–23 and reconciled them with OSINT data, InformNapalm’s volunteers found out that Russia’s hybrid forces moved their heavy artillery systems well in advance in order to escalate and shell the Ukrainian Army emplacements in Donbas on January 24—for instance, in the vicinity of the forces separation zone near Zolote. This shelling by the Russian hybrid forces may have been linked to the 5th anniversary of the bombardment of Mariupol on January 24, 2015, also under the command of the Russian officers. Some of them were later promoted and made generals at the order of Russia’s president Vladimir Putin.

This publication was prepared  by Roman Burko especially for InformNapalm. Translated by Oleksand Ivanov. Distribution and reprint with reference to the source is welcome! (Creative Commons — Attribution 4.0 International — CC BY 4.0)

No Responses to “Donbas conflict intensification: Militants transported 120- and 122-mm guns via residential areas day before”